The Difference Between Green Onions And Chives 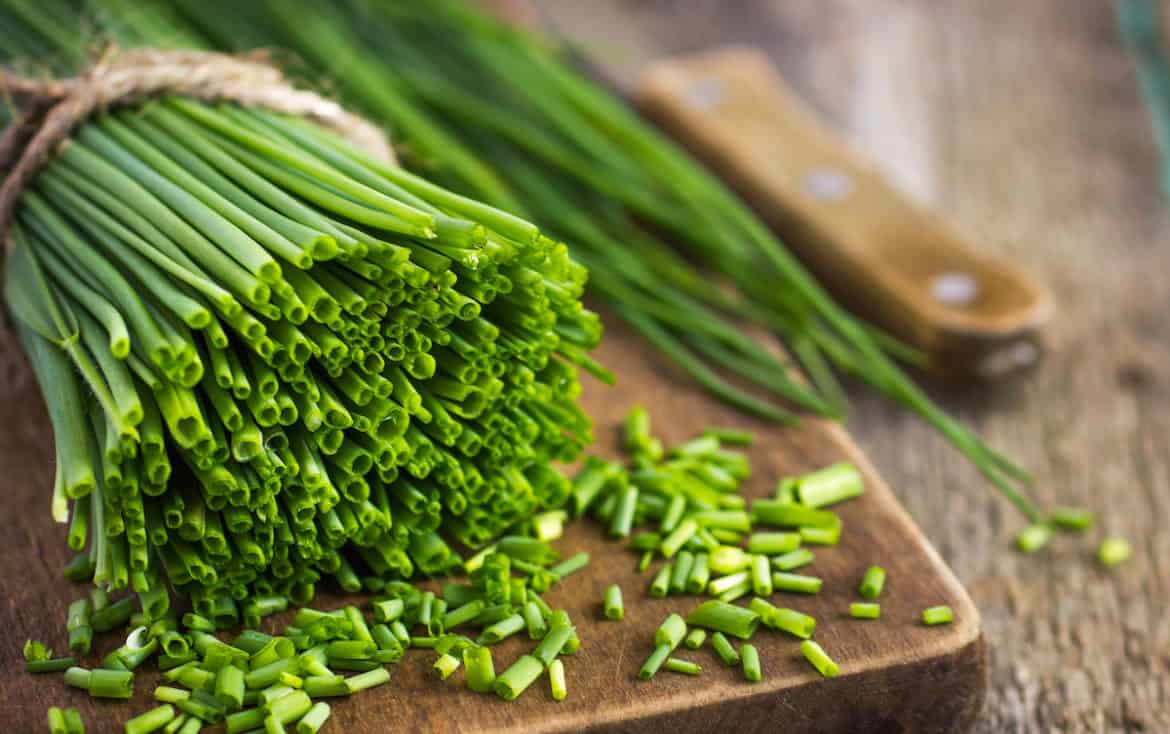 For two plants that taste remarkably similar, there is a surprising difference between green onions and chives, and not just their names. Many people wonder if they’re the same thing because they look and taste very similar, but they are different plants with different practical uses and even different nutritional profiles.

So what’s the difference between green onions and chives? The main difference is that green onions are a vegetable while chives are considered an herb. Chives also have a higher nutrient profile than green onions, since herbs in general usually have a denser nutritional content.

This article is going to look at all the differences between green onions and chives, and a few of their similarities, so that you never hesitate in which one to use again.

Herbs, Vegetables and the In-Between

To begin our discussion, it will help to understand the difference between herbs and vegetables. Strictly speaking, a vegetable is any plant, including roots, leaves, and stems, that you can eat and use as food. This is distinct from fruits, which are the seed-bearing part of the plant.

Herbs are plants that have leaves, flowers or seeds that can be used for flavoring, medicine, or perfume.

The main difference between herbs and vegetables regarding cooking is whether you eat it as a primary food (vegetable) or use it for flavor (herb). What does this have to do with green onions and chives? To start, green onions are commonly considered vegetables whereas chives are thought to be herbs.

What are Green Onions?

Green onions, also known as either scallions or spring onions, are a specific type of onion and a vegetable. Just as red, white and yellow onions are all different, though related, so are green onions.

Green onions have a milder flavor than most other varietals, and they don’t have a large bulb – which we commonly think of like the onion itself – because they’re harvested when they’re very young.

Instead, they simply have a small white root and long, green leaves. There’s no reason to wonder which part of the green onion you should be eating because the simple answer is all of it.

When Should You Use Green Onions

First, when you’re buying and preparing green onions, you should look for bunches that have the lightest green color. The darker green the leaves get, the older they are and the tougher and more pungent the leaves are going to be.

Green onions and chives are both great for flavoring cooked foods, but when you’re working with chives you’ll develop the best flavor by sauteeing them very lightly with a bit of oil or butter before adding them to your dish. You still want to be careful not to overcook them, but the fat will bring out their natural aroma and more of the flavor.

If you’re making a stir-fry, add your green onions just a few minutes before your meal is done cooking.

You can also eat green onions raw, as a great addition to salads or sandwiches.

Green onions tend to be less expensive than chives, so you may find restaurants substituting them on dishes like baked potatoes or as garnishes. The flavor is similar enough that you can easily substitute one for the other, but chives are more nutritionally dense than green onions, so they’re worth splurging for, at least occasionally.

Chives are closely related to all onions, but they’re a unique species unto themselves, being the smallest member of the onion family. They’re very pretty when they grow, much like grass, with small purple flowers that are also edible.

Chives have an even more delicate flavor and can be found easily either fresh, dried or powdered. Because they’re typically only used to flavor or garnish dishes, they’re considered an herb, not a vegetable.

When Should You Use Chives

Whenever you’re trying to add flavor but not necessarily bulk to your dishes, choose chives over green onions. They work well in omelets or soups or blended into soft butter and cheeses.

If you’re going to cook with chives, add them at the last possible moment because the longer they are cooked, the more their flavor will disappear.

You can also use chives as a substitute for other herbs that are more of an acquired taste, such as cilantro or parsley. They also pair well with herbs such as tarragon or chervil, being very popular in French cuisine like this.

You can also use chives to garnish, but they’re so densely packed with nutrition, you’re not going to want to leave this garnish on your plate. Enjoy every last morsel.

Green onions and chives are both great choices when it comes to adding some nutrition to your daily meals, but chives are absolutely the more nutrient-dense option if you’re trying to decide which to pick up on your next shopping trip.

This chart gives the basic macronutrient calculations as well as a few of the more impressive vitamins and minerals, but it doesn’t tell the whole story.

Green onions have even more Vitamin K, upwards of 260%, but otherwise fall slightly short of the nutritional power of chives.

How to Store Green Onions and Chives

Both green onions and chives can be stored carefully in your fridge, though green onions will last a day or two longer than chives.

To keep them fresh as long as possible, wrap the roots with a slightly moist paper towel and then place your greens into a Ziploc bag that isn’t sealed completely. Some airflow is good for your onions.

Make sure you place them in a compartment where they won’t be crushed because that will cause them to wilt much quicker. Stored well, you should be able to keep green onions for up to 7 days and chives just slightly less.

Are scallions the same as green onions (or chives)?

Scallions and green onions are, in fact, the same thing by different names.

Scallions are part of the onion family but they don’t grow large bulbs like most onions, but instead, they are harvested for their long, grass-like leaves that have a milder flavor than their onion cousins.

They can be eaten raw or cooked and the entire plant is edible and very healthy.

What is the difference between herbs and spices?

This is something that confused me for many years because herbs and spices are often the same plants, just called different things. Herbs are the leaves of specific plants whereas spices are made from the other parts of the plant, including the seeds, roots, and even bark.

A good example is cilantro. In the USA, cilantro is the fresh leaves of the coriander plant, and coriander is what we call the seeds. Cilantro is an herb, coriander is a spice. To keep things interesting, in other parts of the world such as the UK, cilantro is referred to as fresh coriander.

What are garlic chives?

Garlic and onions are both part of the allium family and so are the chives that grow from their namesakes. Most people think of onion chives when they refer simply to “chives” because this variety is the most common. It has a mild onion-y flavor.

On the other hand, garlic chives have a distinctly garlic-y flavor and aroma that is quite potent. Garlic chives are used mainly in Asian cooking and aren’t very popular in the rest of the world, though you can enjoy the green spouts of a garlic bulb in much the same way.

How many types of onions are there?

There are many types of onions, but the most common in the USA are Yellow, Red, White, Green as well as Sweet Onions and Shallots.

What are green onions in Australia?

If you’re in Australia trying to find all the ingredients in a recipe that calls for green onions, you might be in trouble. Down under, green onions are more likely to be called spring onions, but they’ll also occasionally be labeled as either shallots or scallions, just to keep life interesting.

To be safe, search for the long green leaves and small, under-developed bulbs, regardless of what they’re called.

How To Freeze Kefir Grains – The Best Way