Home Cooking Tips Can You Use Marinade As Sauce?
Cooking TipsFoodsguyThis vs That

Can You Use Marinade As Sauce? 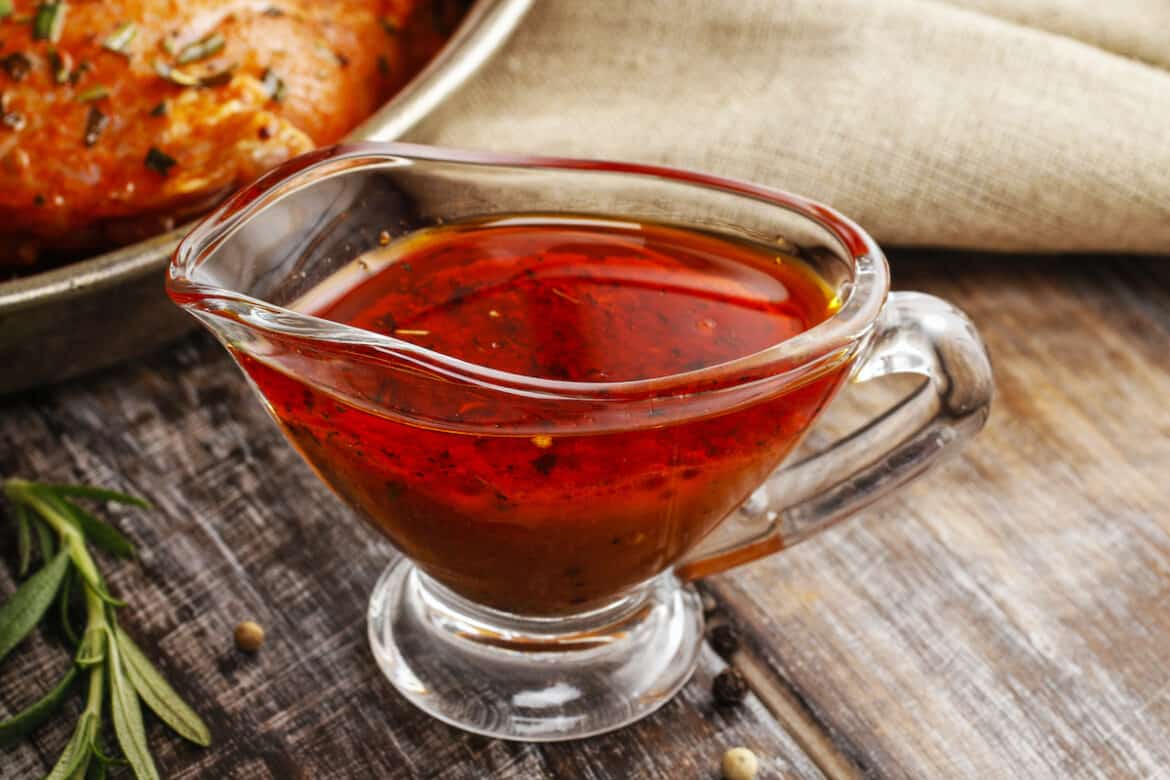 Marinades are extremely flavorful liquids used to not only tenderize meats and other ingredients but to infuse them with a savory, spicy, sweet, or tangy flavor.

But, can you use marinade as a sauce? You can definitely do so, but you absolutely have to cook the sauce. This is done to help develop the flavor, reduce the consistency to that of a sauce, and kill any potential bacteria.

You can also adjust the marinade recipe so that it works better as a sauce, or alternatively, you can incorporate the marinade into another sauce recipe.

In todays’ packed article, we will have an in-depth look at all the differences between marinades and sauces so that you can better understand what you need to change to make it a sauce.

We will also give you some fantastic methods to try and some great tips we have learned over the years!

Yes, there is actually a difference! When we initially started our cooking journey, we were very surprised to find out the major differences between a marinade and a sauce.

What Is A Marinade?

A marinade is a very runny liquid mixture that is used to add flavor to food items before they are cooked.

The food is marinated inside the liquid anywhere between 30-48 hours! While the food marinates, it becomes more tender and gains a ton of flavor.

You can even try marinating frozen meats if you forgot to thaw your food in time, but that’s a whole other process.

A basic marinade consists of an oil, an acid to tenderize the meat, and additional seasoning ingredients that will help add flavor. The oil acts as the bulk of the marinade and helps hold the other ingredients.

It doesn’t necessarily add any flavor unless you use a flavored oil like avocado oil, macadamia nut oil, strong olive oil, or sesame oil.

The acid has an extremely important role in marinating. This acidic ingredient help weaken the strands of food and allow the seasoning ingredients and other fluids to enter and add flavor. This creates more tender and juicy meat.

This acidic ingredient can either be something like vinegar (the most common choice), citrus juices, and even wine.

You can also choose ingredients that have enzymes that can help tenderize food. Some ideas include fresh kiwifruits, pineapples, papaya, ginger, and guava.

Then finally, we have the seasoning ingredients. This category includes virtually all the other ingredients that will add flavor like spices and herbs.

This is where we love to play around with flavor combinations, especially when choosing a neutrally flavored oil and vinegar.

To make a marinade, all the ingredients in the recipe are simply whisked together. There isn’t any cooking involved, nor is any heat applied to the marinade.

Sauces are much thicker liquids that only add flavor and moisture to food after the food has been cooked. It’s more of a condiment than a cooking ingredient.

It does not have any effect on the texture or consistency of the food. Sauces are prepared and cooked completely separately from the food it is being served with.

Sauces are, for the most part, completely smooth, but some sauces do have some texture to them. For example, they can include chopped herbs, nuts, or dried fruits.

There are also different categories of sauces, whereas marinades have less variety in terms of qualifying factors.

You have your five mother sauces which include a béchamel sauce, veloute sauce, brown sauce, Hollandaise sauce, and tomato sauce. A ton of other sauces are some variation of a mother sauce.

These sauces have a basic structure that usually includes some form of thickening agent or reduction method to achieve the correct consistency.

Regardless of which, the sauce is always cooked out to remove any impurities, help develop flavor, and of course, to achieve that thick consistency.

Then you get reductions, another common type of sauce. Reductions are sometimes very runny or extremely thick. You can also get pan sauces, which are made by deglazing pan drippings.

To sum up, marinades are very runny liquids in which you soak food before it is cooked. Sauces, on the other hand, are much thicker and are served as an accompaniment with food after it has been cooked.

Marinades consist of raw ingredients that are never cooked or reduced, but rather simply mixed together and used.

Sauces consist of a bit more ingredients and elaborate preparation methods to help develop flavor and the correct smooth texture. Sauces are also always cooked to help get a perfect consistency.

Can You Use Marinade As Sauce?

Now that you see the major differences between marinades and sauces, you might be thinking that it is impossible to use these interchangeably.

Well, that’s where we were also wrong. It is much easier to use a marinade as a sauce than to use a sauce as a marinade.

Because most sauces (virtually all of them) do not contain enough acidity in the recipe, they will not be able to tenderize the food and add flavor in that way.

However, you can reduce a marinade to a much thicker consistency, cook the ingredients, and ultimately turn it into an accompanying sauce.

There are a few methods you can use; let’s look at the best ones.

This is arguably the easiest way to make your marinade a sauce. By reducing the marinade, you are cooking the ingredients, evaporating excess moisture, and adjusting the consistency.

Marinade ingredients, as we have mentioned, are raw and very unappealing when used as-is. It is essential to cook them over low or medium heat to help develop the flavor of the oil, acid, spices, and herbs.

To reduce a marinade, simply bring the mixture to a boil, then reduce the heat and allow the marinade to simmer until it has reached the correct consistency. Make sure that the marinade isn’t covered while it simmers so that it is reduced faster.

We like our reduced marinade at a thicker consistency, just because it has very rich meaty flavors that sit well on virtually all food.

Make sure to strain any whole spices, herbs, or other ingredients that are not appealing to eat as-is. Make sure to reduce your marinade first before removing these ingredients. Otherwise, you will lose a lot of delicious flavor.

With this method, you still have to cook and reduce the marinade to make sure you develop the flavors. Where this differs from simply reducing the original marinade recipe is that you are adjusting it before starting to cook it out.

Marinades are usually very acidic to help tenderize the food. This acidity will not necessarily be appealing in sauce form once reduced.

Now, of course, you cannot remove acidity once it has been added to the marinade, or once the marinade has been used to tenderize and flavor food. But you can neutralize it and reduce its intensity.

Before starting to cook or reduce the sauce, add about ¼ teaspoon of baking soda per cup of marinade. Baking soda is an alkaline that will neutralize the acidity of your vinegar, wine, or citrus juice.

Once whisked in, you can bring the marinade to a boil, reduce the heat, and simmer the marinade until you are happy with the consistency.

This doesn’t only apply to the acidity factor of your sauce. If you want a sauce that is less spicy, sweeter, etc., do so before cooking it.

You can remove whole spices so that their flavor does not intensify when they are cooked.

You can add honey, sugar, or syrup to add sweetness to your marinade. You can also add even more herbs and spices to adjust the flavor profile of the sauce.

Use The Marinade In A Sauce Recipe

This is not really using a marinade recipe as is, however, it is still an option. You can incorporate your marinade into another recipe to create a sauce, or make up your own recipe.

To create your own recipe using the marinade is easier than you think. Look at what you want to use it with, then decide what flavors you need with it.

For example, you can make a tomato-based sauce and add some marinade. Tomato-based sauces are arguably the easiest to make because they usually have acidic ingredients and spices added to them (which the marinade already has).

You won’t really ever add marinade to a cream-based sauce, just because the flavor profiles are vastly different!

Can You Use Bottled Marinade As Sauce?

You can definitely use the bottled marinade as a sauce, however, we would still recommend at the very least cooking it for a bit.

Most bottled marinades have been cooked and strained before they are sold, however, they still have a very runny consistency and sometimes their flavor has not been fully developed.

You can, again, simply place the store-bought marinade in a pot, bring it to a boil, then reduce the heat and allow it to simmer for a couple of minutes or until you are satisfied with the consistency it has reached.

Can I Use A Marinade As A Stir-Fry Sauce?

If you want to use a marinade as a stir fry sauce, you don’t have to precook it. Because stir fry sauces are added to the ingredients while they cook, the sauce will cook out and thicken during that time as well.

Can You Cook Food In A Marinade?

You can cook almost anything in a marinade, but depending on how you want to serve it, you may still want to reduce it first. With the stir fry, you don’t need a ton of sauce, which is why we recommend not cooking it before adding it.

However, if you are cooking meat inside the marinade, you will probably remove it from the sauce when serving it. So a thicker sauce will coat the piece better.

Is It Dangerous To Use Marinade That Was used On Raw Meat?

This is another big reason you have to cook the marinade. While the acidity will most likely kill most of the bacteria or at least make it an inhospitable environment, there is always still a risk.

Bring the marinade to a boil or at least 165°F (74°C) to make sure you kill any remaining bacteria.

Does Baileys Need To Be Refrigerated?

Can You Microwave Food Twice?

What Teas Are Served In Chinese Restaurants?