How To Thicken Clam Chowder – The Best Way 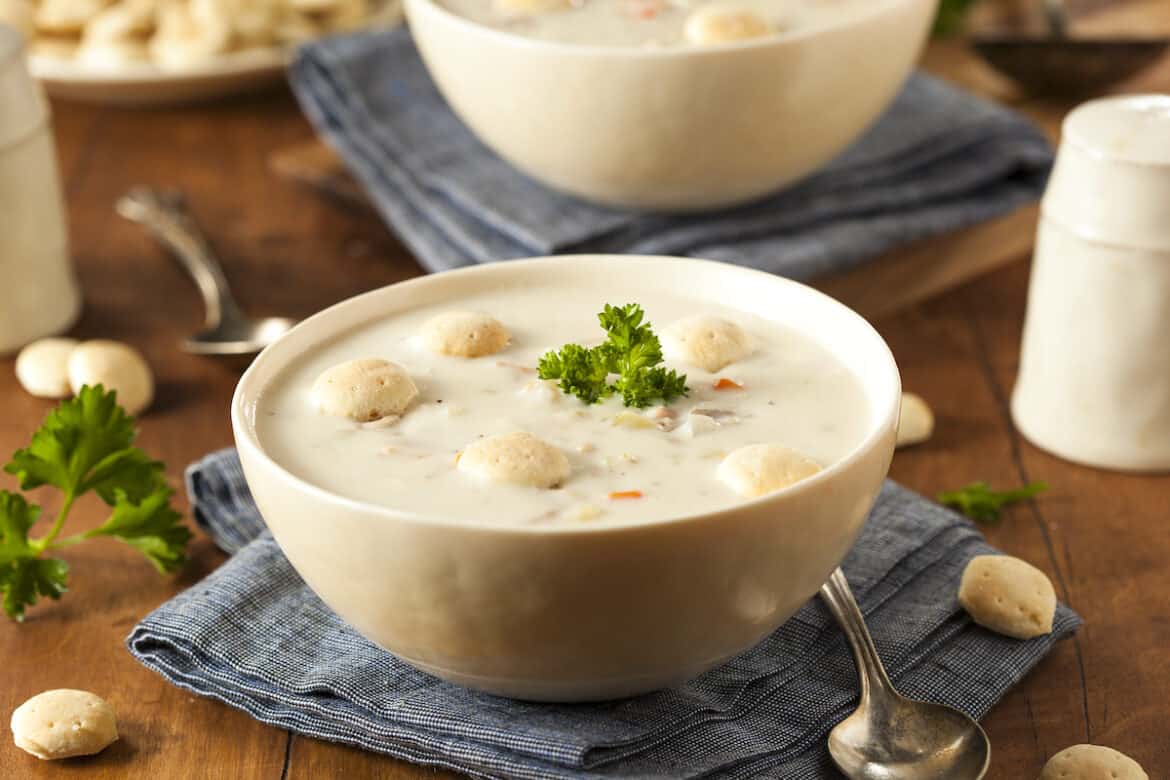 Clam chowder is a timeless classic. This hearty soup has many variations but nearly all of them have one thing in common – a rich and creamy texture. But clam chowder doesn’t always turn out as thick as you want it to.

In this article, you will get step-by-step instructions and additional tips for thickening clam chowder easily and effectively. Let’s get started!

Should Clam Chowder Be Thick or Thin?

People have different preferences when it comes to the consistency of clam chowder.

Additionally, if you are making traditional clam chowder, you may need to use heavy cream which makes the chowder quite creamy and thick. According to many people, the best consistency of clam chowder is when it is thick enough to coat the back of the spoon.

It seems safest to say the consistency of clam chowder is really a matter of preference! Besides, even if there is one “right” way, at the end of the day, we like what we like.

But for those who want a thicker clam chowder than they’re getting, read on.

Why Is My Clam Chowder Not Thickening?

Home-made always tastes better right? Well, usually anyway. If you don’t want to go with store-bought, a homemade clam chowder can be rewarding, but only if you can nail that perfect texture.

Clam chowder may turn out watery if you leave out one of the thickening ingredients in the recipe, such as heavy cream or butter. If you replace either with dairy-free alternatives, you may be using thinner ingredients and that can affect the texture.

Also, attempts to make low-calorie clam chowder, some people leave out or add less of the starchy ingredients, including flour and potatoes.

Doing this causes the chowder to become watery. These starchy and high-fat ingredients are what make clam chowder rich and creamy.

Why Does Clam Chowder Become Watery?

A big batch of clam chowder goes a long way. You can store it in the fridge and have a hearty dinner for a few days in a row.

But a common problem with clam chowder stored in the fridge is that it becomes watery.

Why does this happen?  The answer is simple. The fats harden as the chowder cools down making the overall consistency watery.

Your clam chowder will regain its initial texture as soon as you reheat it either on the stovetop or in the microwave. Stir the chowder while it heats to quickly break down the congealed fats.

How to Thicken Clam Chowder?

Whether you are in the process of making clam chowder or it is already cooked and ready – but not of your desired consistency – you can save the situation.

Luckily, there are multiple ingredients to help you thicken the soup and improve its consistency. These ingredients, for the most part, are always at hand. We’ll show you how to use each.

Flour is a staple ingredient in every kitchen. To make a creamy and thick clam chowder you need to start with a roux. Roux is a combination of flour and fat. It is used as a base for sauces and soups to achieve a thick consistency.

To use flour to thicken clam chowder, follow these steps:

When using flour to make creamy and thick clam chowder, make sure to use flour that contains gluten. Regular wheat flour works best for this reason. Using gluten-free flour won’t make any difference in the soup in terms of improving its texture.

If gluten isn’t an option, try adding a different ingredient from this list, such as potatoes or xanthum gum.

For a really thick clam chowder, cornstarch is the ingredient to go for.

A tablespoon of cornstarch along with cream will take your clam chowder into another level of richness and make it exceptionally thick and creamy.

Here’s how to add cornstarch to your chowder the best way:

For some people, adding the cream is enough to reach their desired texture. But sometimes the chowder may turn out thinner than expected. In such cases, adding a tablespoon of cornstarch mixed with cold water will work.

Mix the starch with cold water and pour the water into the chowder. This mixture will instantly make it thicker.

It is relatively hard to thicken a clam chowder that has already been cooked. An easy and effective way to make an already cooked clam chowder thick is to add potatoes.

Xanthan gum is not as common of an ingredient as flour or cornstarch. However, some people do prefer it as a thickener and stabilizer. This food additive comes from fermented sugar and is completely safe for consumption.

A small amount of xanthan gum can bring your clam chowder to your favorite consistency. Here’s how to use it:

One of the easiest ways to thicken a watery clam chowder is with crackers.

Adding crackers is as easy as this:

When using crackers to thicken clam chowder, make sure that they are not too salty. Unless you haven’t added much salt to your chowder, super salty crackers could ruin the flavor of your carefully made chowder.

Here are a few additional tips you can use for a rich, creamy, and thick clam chowder.

Some people don’t like thick clam chowder because of the amount of flour that is usually in it. If you are one of these people, consider making clam chowder with mascarpone cheese.

Thanks to its texture, mascarpone cheese is widely used to thicken soups. It is used instead of cream and makes the dishes rich and creamy.

2. Use Arrowroot Powder Instead of Cornstarch

Arrowroot powder is a healthier cornstarch alternative. This ingredient is an effective thickening agent used in soups and sauce.

As opposed to cornstarch, arrowroot powder leaves the soup clear and gives it a glossy look. Additionally, it doesn’t have a flavor.

Arrowroot powder contains more dietary fiber and calcium compared to cornstarch. This makes it perfect for those looking for health benefits in every ingredient.

One of the benefits of using arrowroot powder to make creamy and thick clam chowder is that it helps to retain the texture of chowder when you freeze and defrost it.

3. Use a Blender to Improve Your Clam Chowder Texture

If you want to improve the texture of your clam chowder and thicken it without adding flour or any other ingredients, do it with the help of a blender.

This method will work whether you have an immersion blender or a classic countertop blender.

Instant mashed potatoes are not the healthiest food. Potatoes that go through the process of cooking, mashing, and dehydrating contain a high amount of sodium.

But instant mashed potatoes are a lifesaver when you want to quickly, easily, and efficiently thicken your clam chowder.

Add the instant mashed potato powder to the clam chowder, stir, and you will see the chowder thickening before your eyes. Be careful not to overdo it with the powder, though.

5. Use Heavy Cream in Clam Chowder

If you don’t want to add flour and starchy ingredients to the clam chowder to thicken it, another route to take is to add more fat. It is best to add heavy cream as the traditional clam chowder recipe calls.

Some recipes call for milk. While milk for clam chowder works decently, substituting it with heavy cream will result in a richer and creamier texture – and more calories, of course!

Up Next: What To Eat With Clam Chowder

What Temperature To Cook Salmon? – The Ultimate Guide

hey thank’s for what you do i would love to be writeing about food myself excepth my grammar and spelling stink lol oh well i will stick to the stove. also i used this method i learned from cook’s illustraded. it’s kinda what you have covered already but a little different technique you just melt the butter first and then add equal amounts of flour to it and stir it and add to your soup/chowder/etc ok thanks again take care and be safe MR marc slemp PS i’d love tro have a blog if i could just figure it out LOL