What To Eat With Clam Chowder 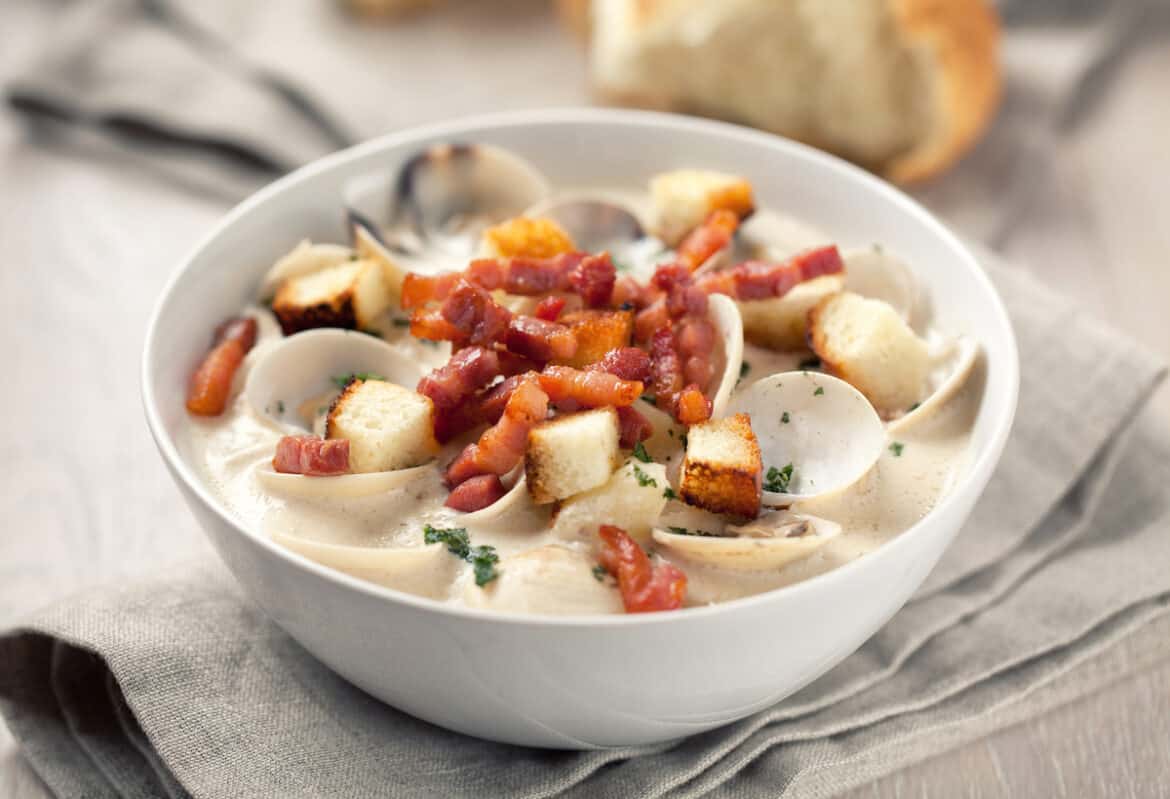 Clam chowder is such a delightful dish. It’s a creamy, flavorful, and delicious soup that can be made in many different ways. People make it differently all over the continent. Of course, your own recipe is always the best!

Regardless of how you like your clam chowder, you should know the best way to serve it as a meal. There are certainly some who would say that clam chowder is enough.

This can be true, but clam chowder is meant to be accompanied by sides of some sort, even if they’re something simple, to cleanse your palate.

What do you eat with clam chowder? There are several good options for sides to eat with clam chowder, including corn on the cob, Caesar salad, bread rolls, oyster crackers, and more. The best sides give your mouth a break from the creaminess and a new texture to explore.

We’ve put together a guide that will share with you some of our favorite sides to match with clam chowder. While we won’t share the entire recipe here, we will give you ideas for dishes and plenty of inspiration.

Keep reading to learn what you should make to eat with your next clam chowder.

9 Side Dishes to Eat With Clam Chowder

While you really can’t go wrong with whatever you decide, we have found that some foods really complement the flavor of clam chowder. What we prefer are vegetable-based sides, but there are some other options too.

Ultimately, clam chowder is the base of your meal, and whatever you serve with it is meant to be a side dish, so you don’t want anything overly heavy or something that will take away from the enjoyment of your clam chowder.

1. Simple Corn on the Cob

You really can’t go wrong with corn on the cob. It’s a simple vegetable addition that is easy to make and you can make it to your taste.

You can always make a side of loose corn, but there is just something that is really appealing about that sweet crunch from the cob. The sweet and juicy flavor perfectly accompanies the creamy texture of clam chowder.

Corn on the cob is a great summer option, but you can make it year-round as well. Slather it in butter and sprinkle a little bit of garlic or basil on it for some extra flavor.

We love grilled corn on the cob in the summertime, but you also can’t go wrong if you choose to boil your corn instead.

This is a spin on corn chowder, which is one of the reasons it works so well.

One of our very favorite pairings with clam chowder is a good Caesar salad. That creamy, rich flavor of clam chowder calls for something crisp, silky, and crunchy to accompany it.

A Caesar salad typically includes crisp Romaine lettuce with a bit of parmesan cheese and some black pepper and croutons.

Some people like to add additional ingredients like onion, egg, and so on. You can also use a traditional Caesar dressing or make your own dressing that is similar.

The key is to keep the salad light and simple to pair with your rich clam chowder. The soft potatoes of the chowder somehow make a wonderful complement to the crisp lettuce of the salad.

Your croutons will also give you a little bit of a crunch, perfecting the combination altogether.

This is your classic soup and salad combination and it is certainly one of our favorites. You really can’t go wrong here.

What better option to pair with soup than bread? Honestly, when you use bread you need no other side. It is the perfect piece to bring your meal together and give you that little something to round off the clam chowder.

Rolls or bread go with any soup, and that goes for clam chowder too. If you choose to pair your clam chowder with a bread product, you can choose just about anything you want.

Skip the crackers and go with a baguette, biscuit, butter roll, Hawaiian roll, or even cornbread to soak up all that creaminess.

Homemade bread is, of course, our favorite option, but you can’t go wrong with bread at all.

It’s also not uncommon to simply serve clam chowder in a bread bowl if you really want to take your bread game to the next level. In this event, sourdough is a great choice.

No matter how you serve your bread and clam chowder, we recommend a bit of butter with your bread.

We know we just told you to skip the oyster crackers, but if you happen to love them too much, skip the bread instead! Oyster crackers were practically made just for clam chowder, weren’t they?

Clam chowder is thick and creamy, while oyster crackers are small and crunchy. You can just toss a handful into your clam chowder and you’ll be good to go! It’s a delicious combination and one of the most classic options you can find.

You can always buy oyster crackers at your local grocery store, but you can also make them if you choose. Oyster crackers are pretty easy to make from scratch if that is your preference, so look up a recipe or two and find what you like.

Clam chowder really doesn’t have much in it as far as seafood goes. It does have a touch of it, but what better way to really enjoy this feast of the sea than to pair your clam chowder with something else from the sea.

Don’t limit yourself here. While you can stick to simple mussels or something along that line, you can really use any light seafood delight.

Here are a few of our recommendations:

What you will notice is that none of these are hearty dishes. They are light dishes that are made to be simple. They won’t be overbearing or outdo your clam chowder as the prominent piece of the meal.

Why not pair your warm, salty clam chowder with something refreshing, sweet, and savory?

A simple option that we think works really well is a spinach salad with blueberries. You can also use other kinds of berries if you prefer or even mix some berries.

The sweet and savory combination will round out your meal, giving you a little bit of every flavor in a simple dish. We recommend a balsamic dressing to top the salad because you’ll want to keep it light and stay away from creaminess.

We mentioned cornbread in the bread category earlier, but cornbread is really a bread of its own, so we also gave it its own category to explain why it works so well with clam chowder.

Cornbread has that sweet flavor and thick texture great for soaking up the moisture in clam chowder. There are several ways to make cornbread, including skillet recipes and baking recipes.

It’s easy to make cornbread while you simultaneously make your clam chowder.

That’s right, you can enjoy some really great thin French fries with clam chowder as well, and it’s so yummy! Fish and chips is popular for a reason, and while this isn’t really your traditional fish and chips, it’s the same concept.

While some clam chowder has a little bit of potato in it, it’s not enough to make thin French fries a bad option.

You won’t need a dipping sauce for the fries when you use them as a side for your clam chowder. If you really want to dip, dip into your chowder!

Whether you keep them plain and simple or give them some light seasoning, they make a really great option.

Last, but not least, you can serve your clam chowder with roasted veggies and this will always be a winner. We recommend using vegetables like carrots, corn, potatoes, peppers, and maybe squash as well.

You can use whatever vegetables you have on hand and it will be delightful as well. Roast those veggies in butter and the seasoning of your preference. Just be mindful of the flavors of your clam chowder so you don’t have clashing flavors.

Up Next: 5 Best Clam Chowders In A Can

The Best Substitutes For Lemon Pepper