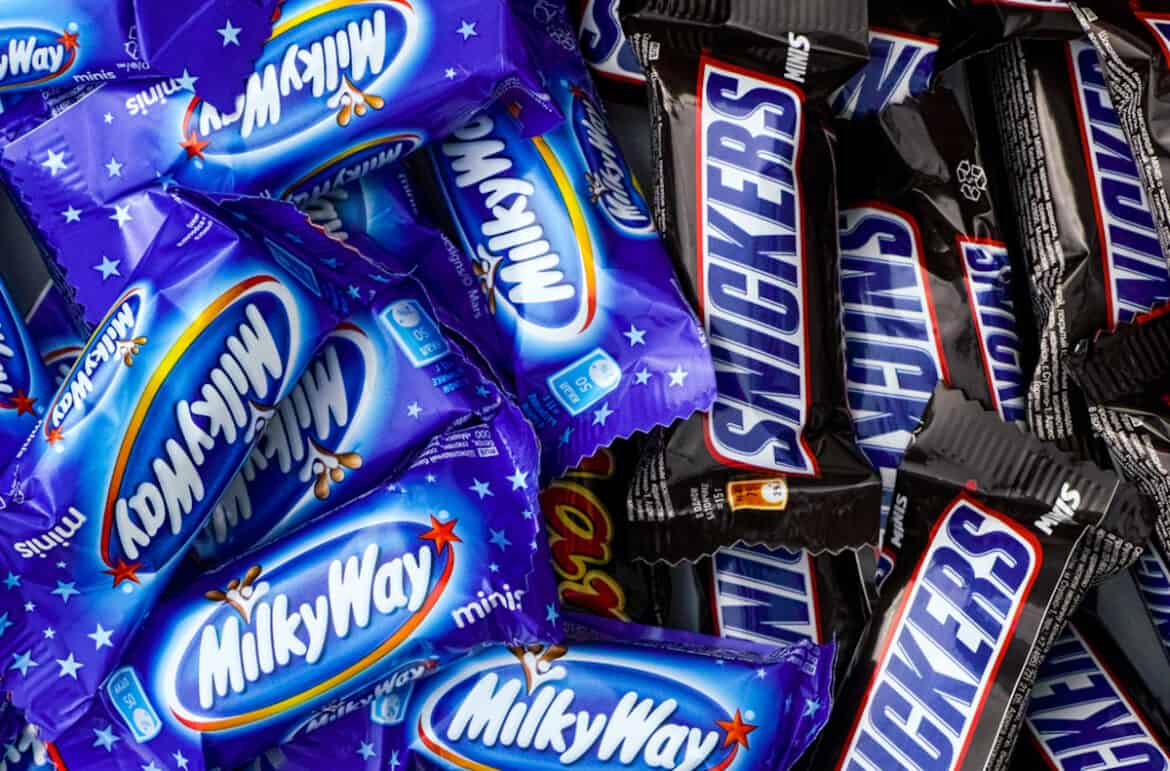 Snickers and Milky Way are two of the most popular chocolate bars in nearly all parts of the world. Everyone knows them and very few people don’t like indulging in these chocolate-rich treats.

Similar in many aspects and manufactured and marketed by the same company, Snickers and Milky Way are still very different.

What are the differences between Snickers and Milky Way? These two chocolate bars, despite containing a few of the same ingredients, have different textures and flavors. While they come in the same sizes, they don’t have the same nutritional value either.

In this article, we have compared all aspects of Snickers and Milky Way chocolate bars. Read on to learn about the history, ingredients, varieties, and nutrition facts of these popular candies.

What Are the Differences Between Snickers and Milky Way?

Snickers and Milky Way are two of the most popular chocolate bars eaten all around the world. And while these candies are very different, similarities cam be found if we compare the two.

Both Snickers and Milky Way are manufactured and marketed by Mars, Inc. This American confectionary company makes almost all the chocolatey treats we eat and love, including Bounty, Twix, and M&M’s.

Though it feels like Snickers is the candy that has been around forever, Milky Way actually did come earlier. This chocolate bar was first manufactured in 1923.

It was the first filled candy bar and it took the brand 3 years to complete the research for starting to manufacture it. Milky Way was a success for the brand right from the beginning.

Snickers, on the other hand, originated a few years after Milky Way. Mars introduced this candy bar in 1930.

The chocolate bar bears the name of the manufacturer’s family’s favorite horse and was sold under the name Marathon bar in the UK until the 90s.

One of the main differences between Snickers and Milky Way is that the former is available in one variant globally while the latter has two variants. Milky Way has a global version – the bar with a blue wrapper, and the US Milky Way version.

The US version is sold in the United States and Canada and is very similar to another candy bar sold in the US – Three Musketeers.

Snickers and Milky Way are, of course, both chocolate bars, and it is not surprising that some ingredients are used in the making of both candies.

There is also added sugar, corn syrup, salt, and egg whites in Snickers and Milky Ways. The manufacturer uses artificial additives for both candy bars.

But there are ingredients unique to each of the two candy bars. Snickers contain peanuts and Milky Ways contain malted barley. These are the two ingredients that provide the unique texture and flavor characteristics of each chocolate bar.

As you can tell from the ingredients of both Snickers and Milky Ways, the traditional versions of both chocolate bars are unsuitable for vegans due to the dairy products used to make them.

Considering that Snickers and Milky Ways contain many similar ingredients, it is only natural that they have similar flavor notes.

With this said, Milky Ways taste like chocolate-malt nougat and caramel. They are topped with delicious milk chocolate.

Snickers are also covered in milk chocolate. However, the layers inside make them taste different from Milky Ways. There are more layers in Snickers than there are in Milky Ways.

There is a layer of nougat, caramel, and peanuts in a Snickers bar. And all of these lay beneath a thin layer of chocolate.

The texture of Milky Ways and Snickers is rather different. This obviously has to do with the ingredients used to make them.

Milky Ways feel lighter and softer than Snickers. The latter has more of a chewy to it. The peanuts in Snickers enhance the crunchier texture of the chocolate bar.

The caramel layer in both Milky Ways and Snickers adds a slight pull to the candies but doesn’t make the bars overly chewy.

Both Snickers and Milky Ways are very well-known. However, it is easy to tell that Snickers are more popular than Milky Ways. Snickers are among the top most popular candies in the US along with Reese’s Peanut Butter Cups and M&M’s.

Snickers are also one of the top-selling candies in the world along with Toblerones and Kit Kats.

Most people enjoy eating the classic versions of their favorite chocolate bars, including regular Snickers and Milky Ways.

But the brand makes numerous varieties of popular chocolate bars to keep candy lovers interested in the sweets that have been around for nearly a century.

Simple Caramel, Midnight, Crispy Rolls, Midnight Dark, and Salted Caramel are some of the varieties of Milky Way bars that the company Mars has come out with.

Snickers, having more popularity than Milky Ways, have even more varieties. You may come across such Snickers versions as Snickers Almond, Snickers Crisp, Snickers Hazelnut, Snickers Brownie, etc.

Unlike the traditional Snickers and Milky Way chocolate bars, the above-mentioned varieties are not always available. And not in all parts of the world.

So, if you eat a special-edition Snickers or Milky Way, know that, unfortunately, you may never come across it again.

The original full-size Milky Way is 1.84 ounces and a full-size Snickers bar is 1.86 ounces. However, both Milky Ways and Snickers come in a few different sizes.

You can find Milky Ways and Snickers minis, original singles, fun size bars, and 2-to-go bars. If you like eating these chocolate bars as snacks, we recommend buying a bag of minis or fun size bars.

These are smaller than regular-size bars. By eating a Milky Way mini or a fun size Snickers bar, you won’t get as many calories and won’t increase your daily sugar intake as much as you would with a full-size bar.

And still, you will get to enjoy the rich chocolatey flavor of your favorite treats.

Whether you are eating Snickers or Milky Ways, they’re not particularly healthy to eat on a regular basis. With this said, it is always good to learn about the nutrition facts of your favorite treats.

When comparing 100 grams of Snickers and Milky Ways, it becomes clear that Snickers are higher in calories. If you have ever eaten both of these chocolate bars, you have certainly felt that Snickers make you feel fuller quicker than Milky Ways do.

Additionally, Snickers contain fewer carbohydrates and more protein than Milky Ways. The cholesterol levels of both chocolate bars are the same in 100 grams of these candies.

Which One Is Healthier Snickers Or Milky Way?

As we have already mentioned, neither of these candy bars can be considered healthy.

But if you have to choose between the two, eating Snickers might be a better option if you want the chocolate bar to keep you full.

A ‘fun-size’ Snickers bar contains enough protein to keep you feeling full until you enjoy your balanced meal.

A Milky Way, on the other hand, is a good chocolate bar to eat as a snack. Two mini Milky Way candies don’t contain a lot of calories.

While you can certainly have a healthier snack altogether, eating sweet snacks like bite-size Milky Way candies from time to time won’t do you any harm.

Are Milky Ways And Three Musketeers The Same?

The main difference between the two candy bars is that Three Musketeers is lighter than the American version of Milky Way. Additionally, it lacks the caramel topping and is smaller.

Are Snickers And Milky Ways Gluten-Free?

The traditional Snickers bar is gluten-free. It doesn’t contain any ingredients that are made with gluten. This chocolate bar can be enjoyed even by people with Celiac disease.

A Milky Way, on the other hand, is not gluten-free. It contains malted barley, which makes it unsuitable for people with gluten intolerance.

Up Next: What Is Cotton Candy Flavor?

How Much Yeast Is In A Packet?