Home Foodsguy Shawarma Vs Gyro – What’s The Difference?
FoodsguyThis vs That

Shawarma Vs Gyro – What’s The Difference? 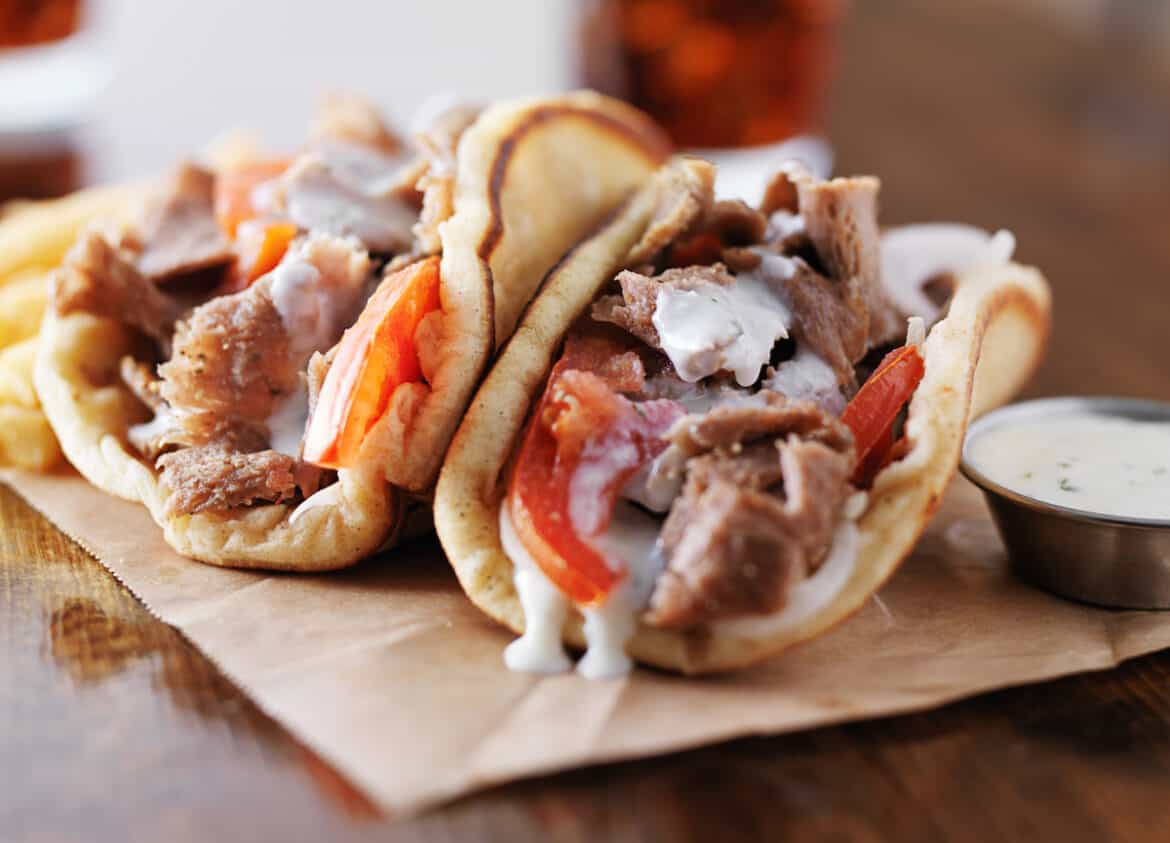 South-eastern European and Middle Eastern cuisine often features pitas, mouthwatering meat, rich sauces, and a variety of fresh salad vegetables. Shawarma and Gyro are two examples of popular street foods that include all the above ingredients but are remarkably different wraps.

So what’s the difference? The main difference between shawarma and gyro is how the area of origin is expressed in the seasoning and choices of meat. Shawarma is Middle Eastern and uses lamb, chicken, or turkey spiced with turmeric, cinnamon, cardamom, and other spices common to the area. Gyro, on the other hand, is Greek and is filled with lamb or beef, seasoned with oregano, rosemary, thyme, and other herbs frequently used in Greek cuisine.

There are a few other key differences between shawarma and gyros, as well as other similar dishes popular in the Middle East and South-eastern Europe, and in this article, we outline everything you need to know before ordering your next sandwich.

Grilled, seasoned meat is very popular in Middle Eastern street food, and shawarma is just one great example of this.

What sets shawarma apart from other hand-held street food meals is the meat and the garnish.

Shawarma is often made with chunks of lamb, chicken, or turkey – all popular meats of the Middle East.

It’s seasoned with spices common to the geography as well: turmeric, cinnamon, cloves, and cardamom, in various quantities and combinations.

The filling is also a sign of it’s Middle East origins. Shawarma is packed with hummus, tahini and pickled vegetables or mangos, which also tend to be flavored with curry spices.

And then there are the vegetable options. You can fill your pita to the brim with shredded red cabbage, carrots, onions, and much more.

Many Middle Eastern foods use similar ingredients and flavors but are very different meals. If you’re on the search for the food described above, you want to be sure you don’t accidentally get confused and buy yourself an equally delicious but significantly different delivery.

If you want to see an excellent Shawarma being made, check out this video by Binging With Babish on YouTube.

What is a Gyro Sandwich?

Very similar to the Middle East, in South-eastern Europe, grilled meat is very popular. A gyro, by definition, is a dish made from thinly sliced meat that has been cooked in a vertical rotisserie. “Gyros” means “turn” in Greek.

The meat, once cooked, is wrapped up in a warm pita with a few basic filler ingredients.

Gyros are often made with pitas, though gyro bread is traditionally a bit more like a thin flat-bread.

The meat is most often lamb or beef, but in more recent times pork and chicken gyros have been making a name for themselves as well.

You can also find deconstructed gyros that are served on a platter with the pita but not necessarily as a wrap.

Where shawarmas are packed with a variety of fresh and pickled veggies, gyros are kept much more simple. Shredded lettuce, chopped tomato, and thin slices of red onion are the usual fillers, and the signature ingredient is the famous creamy, tangy Tzaziki sauce.

What a Gyro Isn’t

There are many street foods that you can find in Greece or Greek restaurants anywhere else in the world that have something in common with gyros but are not the same food at all.

Difference Between Shwarma and Gyro – Breakdown

To start, you’ll need to marinate about 2 pounds of fatty meat of your choice, traditionally beef or lamb. This will make 5 – 6 wraps.

For the marinade, combine ¼ cup of olive oil with equal amounts apple cider vinegar and about ½ cup of freshly squeezed lemon juice. Add to this your own unique concoction of Middle Eastern spices:

Cut the meat into chunks that are about 4 inches long, and no more than 2/3 of an inch in thickness. Rub them well with the marinade and let it soak up all the rich flavors overnight.

To grill the meat, assuming you don’t have access to a traditional rotisserie, you can use an indoor grill like a George Foreman, cooking for 10 – 15 minutes on medium heat.

To assemble, slather hummus and tahini onto warmed pita bread, place your meat and top with a selection of shredded cabbage, carrots, and red onion along with some pickled veggies or mangos.

Similar to the shawarma recipe above, you’ll want to start with about 2 pounds of a nice, fatty cut of meat of your choice.

Traditionally, lamb and/or beef is used. Pat your unique blend of spices into the meat, using any or all of the following:

Let it soak into the meat by resting it covered in your fridge for at least 2 hours.

Gyros are typically made from meatloaves, so once your meat is well marinated, add it to a food processor and chop it up well for about a minute. Transfer it to a well-greased loaf pan, pack it tightly and pour in boiling water until the water reaches halfway up the sides of the pan.

Bake for 45 minutes to an hour at 350F until your loaf isn’t pink in the middle. Pour off any remaining liquid and slice your loaf into thin pieces of meat, ready for your gyro.

To assemble, open your pita pocket and spread hummus along the inside. Stuff in some meat, add lettuce and tomato, and finish with a generous dollop of tzatziki. Roll it up and dig in!

How are shawarma and gyro pronounced?

Some people don’t care if they pronounce a word wrong when getting their lunch, others die a slow agonizing mini-death every time they’re corrected.

To help you out, regardless of where you fall on the spectrum of pronunciation anxiety, here is a phonetic breakdown of shawarma and gyro for English speakers:

Premade gyros sell based on flavor and instant gratification, not health. Lean meat doesn’t have enough fat to make it juicy and mouthwatering, so it’s swapped for fattier cuts of meat. It’s also usually cooked using an unhealthy dose of oil, salt, and sugar.

If you make gyro meat for yourself, there are plenty of ways you can increase the health without downgrading the flavor that isn’t a viable option for a fast food provided.

Marinating or brining lean meat will ensure juiciness and flavor, and it can be grilled or baked for added texture using much less oil.

Shawarma, when purchased pre-made, is delicious, quick, and incredibly satisfying, but it’s not generally considered overly healthy. Of course, if you make it home for yourself you have a great deal more power over what ingredients are used.

What you want to be aware of is fatty, marinated meat that probably has a lot of sugar and salt and plenty of oil used for cooking the meat, as well as the sauce that the meat is slathered in.

If you make it yourself you can monitor the cuts of meat, the amount of oil, sugar, and salt used to season it, and you can use healthier sauce options like hummus or yogurt.

You can also fill it with all sorts of nutritious chopped veggies that you might not get in a pre-made sandwich.