Home Foodsguy Shawarma Vs Kebab – What’s The Difference?
FoodsguyThis vs That

Shawarma Vs Kebab – What’s The Difference? 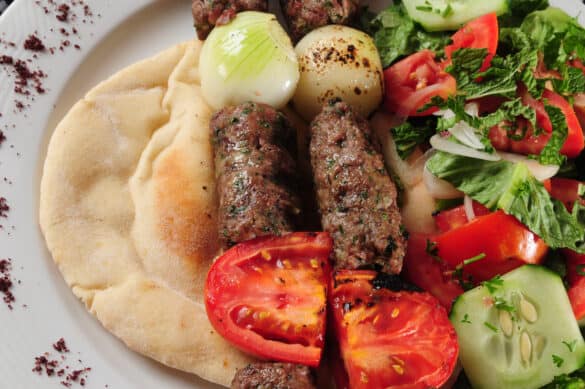 No matter where you live, you most likely have a local fast-food restaurant serving delicious Turkish kebabs or shawarmas. If you have ever wondered what makes these very similar dishes different then this article if for you.

So, what is the difference between shawarma and kebab? While both are native to Turkish cuisine, these two sizzling meat dishes differ in the preparation and cooking methods. As opposed to kebabs that are mostly cooked on skewers, shawarma meat is grilled on a rotisserie. Doner kebab is the only kebab variety that resembles shawarma and is the inspiration behind this dish.

Read this article to learn all about these popular meat dishes and what makes them similar and different at the same time.

You may have heard people use the word ‘kebab’ to refer to any dish that consists of small meat cubes cooked on skewers. However, while this may resemble authentic kebabs, the latter has a rich history and many varieties depending on the country where it is cooked.

How kebab is made differs from country to country. From ground meat to big chunks on large skewers called shish, kebab has a variety of preparation methods.

With this being said, the general idea behind the dish kebab is meat either cut into pieces or ground, cooked on bamboo or metal skewers.

However, it should be noted that some kebab varieties, such as Shammi kebab and Galauti kebab popular in India, are not cooked on skewers.

For these varieties, pounded meat is used. The meat is shaped into round patties and fried.

Because kebab is a widely known dish, many countries in the Middle East region and the Muslim world have their take on this dish.

While many countries make kebab with their own twists, the birthplace of this dish is the Ottoman Empire (Turkey). Thus, there are numerous kebab varieties in Turkish cuisine. Here are some of the most popular ones.

Adana kebabs may also be made with minced beef and lamb.

This kebab type is exactly what foreigners know kebab to be – cubes of meat on skewers. When used in North America, the word kebab is generally used to refer to shish kebab.

To make shish kebab many types of meat can be used, such as lamb, poultry, beef, and fish.

The outer layer of the sizzling meat is shaved off and served either in bread or on a plate with various vegetables, sauces, and bread.

The well-known gyros are the Greek take on a doner kebab.

Shawarma is a popular dish in the countries of the Middle East and the Arabian Peninsula. It is known for its unique method of grilling the meat horizontally on a rotisserie. Hence the name shawarma, which means ‘turning’ from Turkish.

The cooking technique of shawarma originated in the Ottoman Empire (currently Turkey), where the spinning grilling method was used to make doner kebab.

In a word, shawarma is a kebab variety that has evolved into a separate dish and is widely popular in many countries of the world.

Is Shawarma the Same as Doner Kebab?

Shawarma and doner kebab are similar in the way the meat is cooked. And it doesn’t come as surprise as doner kebab is the ‘inspiration’ behind the Arabic shawarma.

For both dishes, slices of meat are skewered on a long rod. The meat is cooked while the tall skewer rotates.

The fact that brings forth a lot of confusion between shawarma and doner kebab is that the meat is prepared on a rotisserie for these two dishes. It is then shaved and served in bread with various toppings.

The difference lies in the origin of these dishes. Doner kebab is one of the many varieties of Turkish kebab, while shawarma comes from the Arab-Middle East region and is derived from doner kebab.

Shawarma is a popular street-food in Egypt and other countries of the Eastern Mediterranean region. It is also popular in the Arabian Peninsula. In the majority of these countries, shawarma is not considered a kebab.

Another key difference between shawarma and doner kebab is the seasoning. The letter is more mildly seasoned than shawarma.

Spices used for shawarma are cumin, turmeric, cinnamon, cardamom, all of which give the dish its pronounced Middle Eastern flavors. Baharat, a Middle Eastern spice blend, is also popular in making shawarma.

What Is the Difference Between Shawarma and Kebab?

As you learn more about kebab and its varieties, doner kebab in particle, a question arises – what makes these two popular dishes different?

In the beginning, lamb or mutton was used to make shawarma. Nowadays, however, as the popularity of the dish has expanded, shawarma is made with many other meat varieties, including beef, chicken, veal, and turkey.

Despite the type of meat being used, lamb fat may be added in between the layers to make shawarma meat juicier and more flavorful. Lamb fat can also be added to the ground meat for kebabs for lightness and added depth of flavor.

For kebabs, the traditional meat varieties are also mutton or lamb. But as many countries have developed their kebab varieties, the dish is now made with different meat types. You may come across different kebab recipes that use beef, chicken, goat, pork, and even fish and shrimp.

When it comes to the preparation of the meat, shawarma has only one way of doing it.

Layers of thin meat are marinated and seasoned beforehand. These layers are then put on the rod that will be spinning and evenly cooking them from the outside.

As it is difficult to come up with evenly shaped layers of meat, people assembling the shawarma meat cone should do it in a balanced way. This ensures that the meat is cooked evenly from all sides of the cone.

The layers of shawarma are typically assembled to form an inverted cone. However, an even barrel-like shape also works.

For kebabs, there are multiple ways of preparing the meat depending on the specific variety being cooked.

For doner kebab, the preparations are largely similar to those of shawarma.

The meat for kebabs may also be ground.

Similar to shawarma, kebab meat may be marinated or seasoned beforehand.

There is one cooking method for traditional shawarma.

Meat layers stacked on a rotisserie are slowly grilled while the rod rotates. Once the outer layer is nicely cooked, it is shaved off to prepare shawarma sandwiches.

As for the cooking methods of kebabs, there is quite a variety.

Kebab on metal skewers may be cooked over a fire. Kebab may also be cooked in the oven or fried in a pan. The latter is suitable for kebab varieties where the meat is cooked without skewers in the form of a patty.

Tas kebab, another variety of this dish, is cooked as a stew. It is made with veal or mutton.

There are multiple ways of serving shawarma. The meat may be served on a large plate along with condiments, vegetables, and bread accompanying it.

However, shawarma is a street-food and many people prefer it to be convenient for eating on the go. Thus, sizzling shaved meat may also be served as a sandwich in pita bread.

The most popular way of serving shawarma is wrapping the meat in flatbread.

Kebabs are generally served on a plate, especially when the meat is cooked on small bamboo skewers.

Kebabs may also be wrapped in different kinds of bread and be served as a sandwich or as a wrap.

You will never eat plain shawarma or plain kebab, without any garnishes and condiments.

Shawarma, whether it is on a plate or served as a wrap, often comes with such fresh vegetables as tomatoes and cucumbers, pickled vegetables, lettuce, etc.

A popular sauce served with shawarma in Middle East countries is tahini.

French fries and onions are common ingredients accompanying the meat in both dishes.

In fast-food restaurants around the world ketchup and mayonnaise are two of the most basic common toppings used in shawarma and kebab wraps.

If you want to learn how to make Greek souvlaki kebabs, I highly recommend Jamie Oliver’s recipe on YouTube:

The 7 Best Oils For Frying Chicken

The 3 Best Mushrooms For Risotto