Home Foodsguy Ravioli Vs Tortellini – What’s The Difference?
FoodsguyThis vs That

Ravioli Vs Tortellini – What’s The Difference? 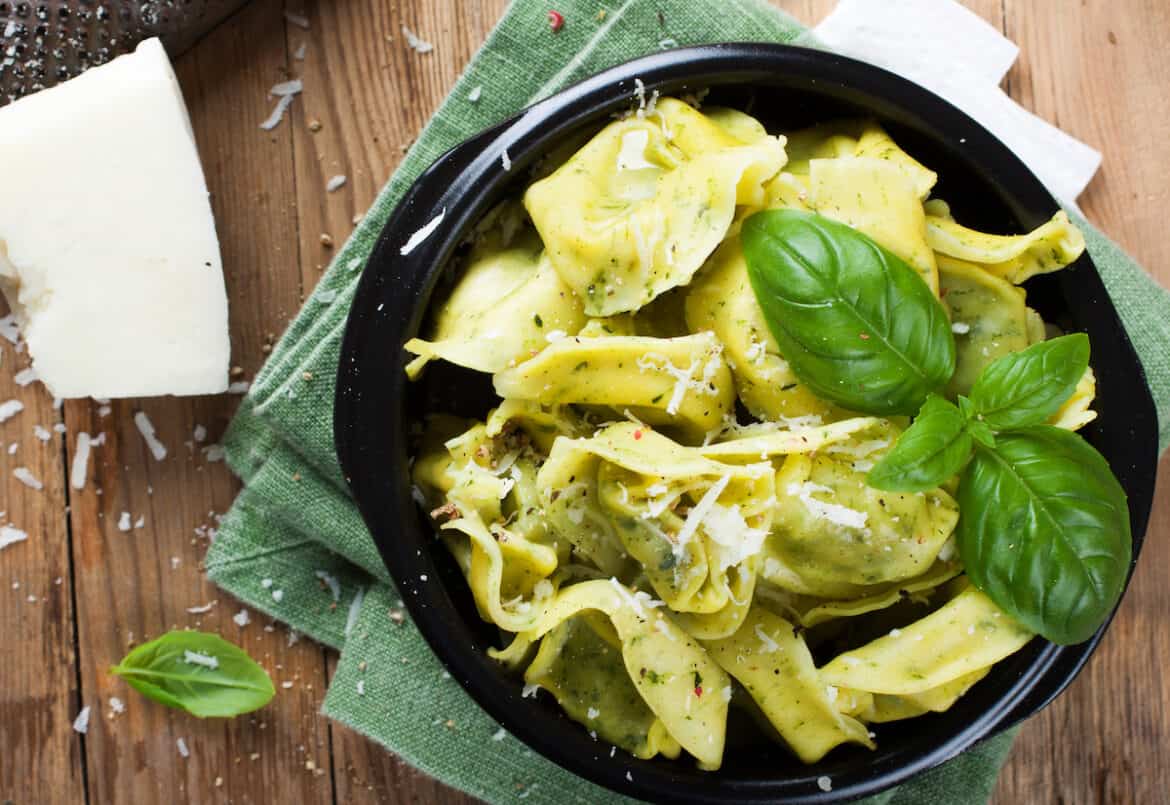 Pasta is a staple in Italian cuisine. It is hearty, filling, and relatively simple. There are so many ways to make it.

The difference sometimes lies in the type of sauces being used. In some cases, the shape or form of the noodles themselves makes the difference.

That said, we just love stuffed pasta recipes as they are incredibly unique and interesting. While it may seem like a minor difference to some, stuffing the pasta lends the dish another layer of versatility.

Both stuffed pastas originate from Italy, but they have some key differences. However, it seems that a lot of people are having a hard time wrapping their heads around the what makes the two different.

But don’t worry. We have you covered. In this article we’ll delve into the individual characteristics of these two pasta dishes in an attempt to show what sets them apart.

It is hardly surprising to find that pasta has steadily gained in popularity over the years.

Pasta has transcended cultures and culinary traditions because of its sheer potential as a culinary treat. It gives you the freedom to explore various sauces and proteins to make something truly unique.

That said, the spread of pasta has also led to the development of countless varieties. It would be near impossible to present each one of them here as the dish comes in so many shapes and recipes. Of course, we still love all of them.

Their simplicity and the fact that it costs very little to make doesn’t hurt either. There are certain pasta recipes that are more well-known and have earned a level of familiarity that simply can’t be denied. The same can also be said for stuffed pastas.

Certainly, the ravioli and the tortellini are similar in this regard. Both of them are incredibly popular and economical. With a bit of effort and practice, anyone can make either of these recipes in the comfort of their own kitchen.

Of course, before you can get around to doing just that, you must first understand how these two stuffed pasta dishes differ. To do that, we must take a closer look at each of them.

Ravioli is a classic example of a stuffed pasta. It is made with a flat, short, and wide egg pasta that is used as a wrapping for various ingredients stuffed inside.

Your choice of stuffing can vary from different kinds of meat, usually pork, along with some cheese and vegetables – especially mushrooms. The most commonly used cheese for Ravioli is ricotta.

The name of the dish itself, ravioli, traces its origins from the Italian Riavvolgere which means to wrap or wind.

The dish itself is incredibly versatile and can be served several different ways. The recipes may vary depending on the culinary traditions of a particular region in Italy.

Regardless, ravioli is usually cut into 4 cm-wide squares. Traditionally, it is served with a broth as it was often used as a main dish for winter meals, playing a central role in Christmas traditions.

Nowadays, in the U.S. and in other parts of the world, the dish is commonly served with a sauce as you might expect from a pasta dish.

Needless to say, the sheer versatility of this pasta dish is what makes it stand out. Its thin sheet of pasta effectively holds the different flavors of your stuffing with the profiles of your meat, vegetables, and cheese perfectly blending together.

That said, ravioli can either be a simple dish or a sumptuous and decadent treat. It all depends on the ingredients you choose to stuff it with.

For instance, the standard fare usually involves the perfect pairing of ricotta and spinach. Or for special occasions, they can be stuffed with even more gourmet ingredients like lobster, and foie gras.

Listed below are some of the most commonly used ingredients for ravioli:

Far from being an exhaustive list, the list of potential ingredients for your ravioli would be too long to present here.

Next, we have the tortellini. Hailing from the Emilia region in Italy, the origin of this ring-shaped stuffed pasta is steeped in local lore and culture.

The distinctive pasta is ring-shaped with a hole in the middle. This is said to have been inspired by the Roman goddess Venus’ navel. Hence, the tortellini is also known by its alternative Italian moniker, ombelico.

Looking at the Tortellini closely, it would be hard not to notice the striking resemblance it bears to a large wonton.

Some would argue that it even looks like a small meat pie. If that is how you think of it, that wouldn’t be completely wrong. After all, tortellini is usually stuffed with all sorts of ingredients, chief among them being meat.

In terms of filling, the meat of choice for the tortellini is usually pork. Depending on the recipe being used, this can be prosciutto or pork loin.

The flavors of the meat are then complemented by cheese, in this case, Parmesan. In addition to this, you can also put in some egg and nutmeg to round out the flavors.

On that note, listed below are some of the most popular ingredients for tortellini filling:

Once you have finished the stuffing your tortellini pasta, be sure to serve it with some broth. Vegetable broth is the most common pairing for the tortellini as it helps perfectly accompanies the richness of the stuffed pasta and its meaty flavors.

However, this does not mean that it would be uncommon to use meat broth. In fact, a lot of people seem to prefer using chicken broth for their tortellini recipe.

It may be strange to think that ravioli and tortellini as dumplings, but that is, in a way, what they are. At least, technically speaking.

After all, they both have a doughy exterior and are stuffed with meats and other ingredients. Of course, to avoid confusion let’s just stick to calling them stuffed pasta.

Regardless of how you may categorize these dishes, it is undeniable that they are incredibly delicious entrees. They have become versatile staples not just in Italian Cuisine but also for the Mediterranean diet.

They have become so beloved that there are even special days dedicated to them in the form of the National Tortellini Day and the National Ravioli Day.

Because of this widespread popularity, it is important that we look closer at both of these pasta dishes so we can better understand what sets them apart. After all, understanding the intricacies of these dishes is an integral part of becoming a better home chef.

Presented below is a brief summary of the differences between ravioli and tortellini we have covered so far:

Ravioli vs. Tortellini – What’s the Difference?

Both recipes are of Italian origin, this probably goes without saying. This explains why the similarities between the two may seem overwhelming.

That is why it is crucial to pay attention to the shapes and contours of the pasta in front of you. More often than not, that could be the thin line that separates one stuffed pasta recipe from the other.

Of course, in this case, aside from the unmistakable difference in the shape of these pastas, there is also the matter of their filling. For instance, while ravioli makes use of ricotta cheese, the tortellini recipe recommends that you use parmesan.

The same also applies to the use of meat the stuffed pasta recipes. On the one hand, the ravioli gives you more room for experimentation. This means that you are free to use different kinds of meat including pork, beef, or even turkey should you choose to.

On the other hand, the tortellini recipe is adamant that you stick with pork, at least as far as tradition is concerned.

Now, the next question that needs to be answered is the difference in nutritional value. After all, they both make use of cheese, meats, and vegetables for filling. Their doughy exteriors also serve as a source of carbohydrates while the meat gives you protein.

So let’s take a look at the nutritional content of ravioli and tortellini:

The table above is based on a single serving or a 108 g cup of ravioli or tortellini. As the figures above suggest, the Tortellini is unquestionably the heartier of the two as it has more calories.

But as many times as I’ve enjoyed a bowl of ravioli and marinara or scooped out the tortellini in my vegetable broth, I’ve never actually stopped to consider what makes each of these popular stuffed pastas unique.

My ancestors are probably looking down on me with grave disappointment. They definitely wouldn’t offer me a second (or third) helping if I confessed to not knowing the difference between ravioli and tortellini.

Both are filled with either cheese or meat, right? So what’s the big deal?

Well, starting with the obvious, the shape of both tortellini and ravioli is quite different—ravioli being square and tortellini being round and sporting a slight hole in the center.

Various pastas receive their names according to the way in which the dough is molded and prepared. Ravioli, or the singular ‘raviolo’ translates to “little turnip” whereas tortellini comes from ‘tortello‘ which translates to “stuffed cake.”

Ravioli is two layers of pasta that form a pillow-like shape whereas tortellini is folded into hat-like shapes akin to dumplings. It’s more likely for tortellini to be used in a broth, though it’s common for both ravioli or and tortellini to include either cheese or meat filling.

How To Keep Ravioli And Tortellini Fresh

Fresh homemade ravioli are quite perishable and will last for 1-2 days in the refrigerator before the filling risks turning rancid.

Commercially made stuffed pasta will last for 3-4 days when stored in an airtight container in the refrigerator.

Up Next: Gnocchi Vs Pasta – What’s The Difference?