The 7 Best Mushrooms For Pasta 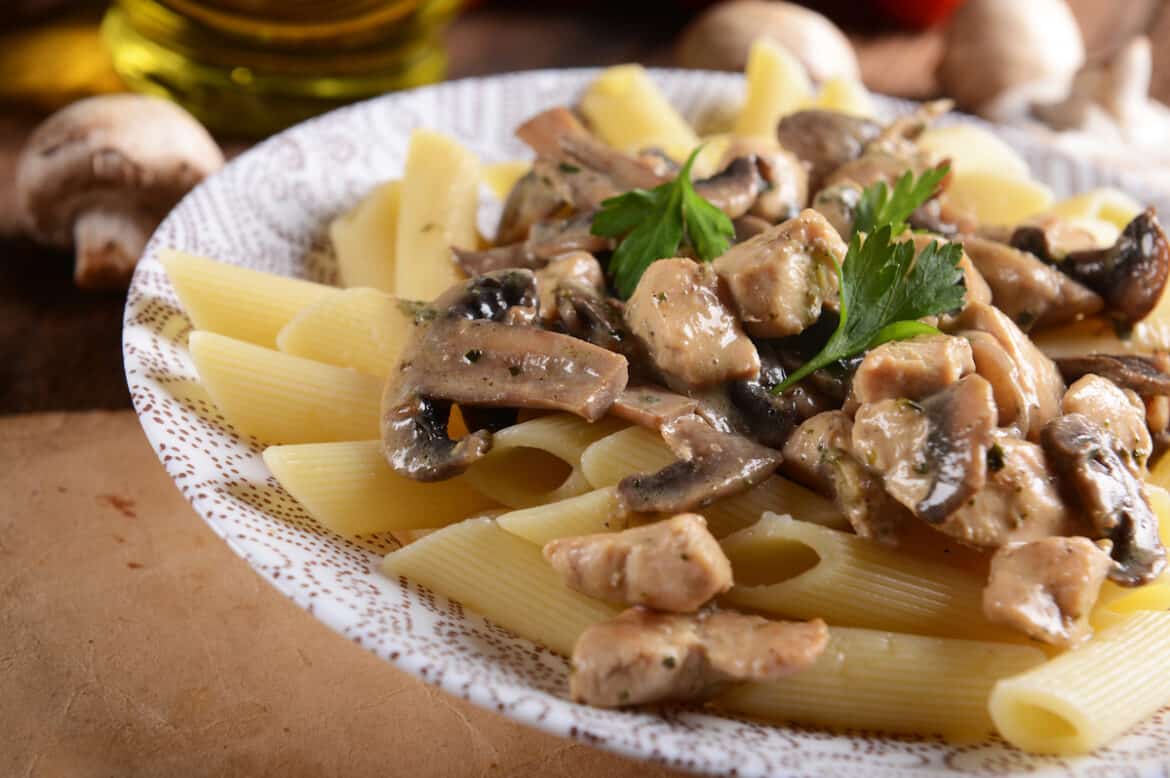 Pasta sauce is made to be rich and luxurious, whether its creamy, tomato-based, or a light and fresh garlic and oil sauce. The one thing that adds savory depth of flavor to any of those options is mushrooms.

There are so many mushrooms to choose from, however, and each has unique characteristics that bring something new to the dish you’re creating.

In North America, we’re spoiled for choice when it comes to mushrooms, having a wide selection of wild and cultivated fresh mushrooms to choose from, as well as easily imported dried international options.

In this article, we’ll talk about the best way to buy each type of mushroom, either fresh or dried, as well as some of the best ways to use each mushroom in pasta.

When you’re making pasta with mushrooms you have the choice to use either fresh mushrooms or dried mushrooms.

One the other hand, dried mushrooms are dehydrated when they’re freshly picked, retaining all their flavor and nutrition. Mushroom experts even agree that the drying process heightens the flavor of the mushroom.

Whether you choose fresh or dried, each mushroom has it’s own unique flavor, texture, shape, and consistency, so next, we’ll discuss some of the most popular mushrooms for pasta in North America.

The 7 Best Mushrooms for Pasta

Almost any edible mushroom can be added to pasta, though some will hold their weight better than others.

Depending on whether you want to really beef up your pasta dish with a meat alternative, add some texture, or enhance a sauce with the earthy umami flavor of mushrooms, there’s a mushroom on this list that will meet your needs.

Portobello mushrooms are perfect for pasta because of their size and density.

They’re known for being one of the “meatier” mushrooms, which sounds odd for a plant, but it’s satisfyingly true.

If you slice them thinly and saute them, portobellos make a great alternative to shaved or thinly sliced beef, such as you might use in a stroganoff.

They’re actually the same as white buttons, just older, and they’re also the same as portobellos, but younger.

All three mushrooms are the same type, Agaricus bisporus, at different stages in their lifecycle.

Crimini mushrooms are similar to portobellos in flavor and texture, and they’re delightful in pasta.

We didn’t give white button mushrooms a place in our top 7 mushrooms for pasta, despite their high ranking in popularity.

The truth is, white button mushrooms are too light in flavor to stand up to most pasta sauces. It’ll be good, certainly, just not as notable as the other contenders on our list of favorites.

Shiitake mushrooms are more popular in Asian cuisine, but they’re readily available on the American market in their dried form (these are our favorite).

They’re wonderful with Ramen or Soba noodles, but just as impressive in creamy linguine.

Shiitake is one of the chewier types of mushroom, which pairs well with a tougher vegetable like kale.

Their earthy flavor is enhanced by the spices you’ll find in a good Italian sausage. Together, along with a salty broth or some tomato sauce, they make a perfect pasta sauce.

Shittake mushrooms are also the best mushrooms for risotto.

If you’re making a white wine sauce for your pasta, then Chanterelle mushrooms are going to be the best choice.

They’re very distinctive with their fan-like shape, and they have a very earthy, rich flavor that’s enhanced by their almost fruity aroma.

They pair incredibly well with white wine and butter.

Chanterelles are a very popular wild mushroom, most often found in the early fall, and as the season gets colder in the Pacific Northwest.

Around this time of year, they should be available in your local grocery store.

Morel mushrooms are definitely the strangest looking mushrooms on our list, but they’re similar to shiitake in their texture and flavor, so you shouldn’t let the odd honeycomb appearance throw you off.

They’re the most commonly foraged for mushroom simply because they’re so easy to identify as safe for human consumption.

Because they’re wild, the most reliable source will be dried morels (these ones from Canada are a perfect choice).

If a mushroom could smell creamy, these would be an example of that scent.

They are best chopped up into small pieces, sautéed with garlic, butter, and cream, and poured generously over your pasta. A spritz of fresh lemon and a side of asparagus wouldn’t be out of place.

Oyster mushrooms, similar to shiitake, are most commonly found in either Chinese or Japanese cuisine.

They shouldn’t be exclusively saved for stir-fries, though because they soak up a rich cream sauce like a sponge.

King oyster mushrooms are one of the largest edible mushrooms you can buy, which makes for a great meat substitute.

Their texture is quite spongey and chewy, so they replace or complement seafood pasta perfectly. You might try them with an angel hair pasta and some sautéed scallops, shrimp or mussels.

Porcini, or porcino, mushrooms are one of the most popular in both Italy and France, which means they must be perfect for pasta.

Around the world, they’re one of the most popular wild mushrooms, and this is true for the US as well.

Because they’re not farmed, they’re much easier to source dried and, many would argue, this is how they taste best (especially these ones).

Porcini are famed for their strong, savory umami flavor so if you add these to your pasta, you will taste them, not just feel them.

In fact, our favorite way to use this mushroom in pasta is to grind them up into a fine powder and add it to a cream sauce for a velvety, luxurious, woodsy flavor.

Fun fact, the word porcino means “little piggy,” named as such for its chubby stature.

How to cut mushrooms for pasta?

For almost any mushroom in almost any pasta, thin slices will work best for flavor and texture in your sauce.

From this point, simply slice them into any size or length that is appropriate for the mushroom and your sauce.

Mushrooms aren’t hard, but they are spongey, so you’ll want a sharp knife to slice through them easily, without crushing or squishing them too much.

Should you saute mushrooms before adding them to a sauce?

Sauteing your mushrooms before you add them to your sauce gives them a chance to brown nicely, bringing out the meaty, earthy umami flavor.

If you simply at them to your sauce, they’ll soak up the flavor of the sauce without really offering as much of their own to the mix.

Try to make sure they’re dry when you saute them, to get more of a fried flavor out of them while avoiding the rubbery texture that you get when they soak up the water – yet another reason to saute them before you add them to a sauce.

What goes well with mushrooms in pasta?

This depends on what type of pasta you’re making, what sauce you’re serving it with, and what type of mushrooms you choose to use.

In general, mushrooms have a savory, earthy taste, so they pair well with smoked meats, white meats, and seafood.

In terms of vegetables, we love them with bright and fresh veggies like asparagus, spinach, leeks, fennel, and, of course, garlic and onion.

Adding a spritz of fresh lemon seems to taste great on any mushroom, prepared any way.

Should you wash mushrooms before cooking?

Yes, you should wash your mushrooms before cooking with them, unless you enjoy the odd mouthful that is slightly dirt-flavored.

The gills of mushrooms attract and cling to dirt and if they’re not washed, that dirt will end up in your food. This is true for both fresh and dried mushrooms.

However, you’ll want to save the washing until just before you cook them because mushrooms will soak up the water and then get mushy, soggy, and potentially moldy if you try to store them after they’ve been washed.

The best method is to rinse thoroughly but briefly under cold water and then give them a spin in a salad spinner if you have one. If you don’t tap them dry with some paper towel before cooking.

Can you boil mushrooms with pasta?

We would not recommend boiling mushrooms with your pasta, as they’ll soak in a lot of water and get quite rubbery, not to mention losing a lot of their flavor into the water, which gets drained.

Boiled mushrooms work well for soups, where the flavor simply melds into the broth.

For pasta, we prefer to saute them sliced, chop them up finely to add to a sauce like ground meat, or even ground into a powder for flavor without the texture.

How to cook with dried mushrooms?

If you know you’re going to be using your dried mushrooms at least the day before you cook, allow them to soak in a bowl of water at room temperature overnight. This will bring out the best level of flavor possible.

If you’re making a meal on the run or at last might, you can use warm water to rehydrate your dried mushrooms and they’ll be ready in 10-15 minutes. Just slice them up and use them as you would any other mushroom.

Once you’re done soaking your mushrooms, keep the water and add it to your broth or pasta sauce as it will hold a lot of extra flavors.

Up Next: The Best Mushroom Broth Powders

Can You Freeze Salad Dressing?