Boiling Vs Steaming – The Differences 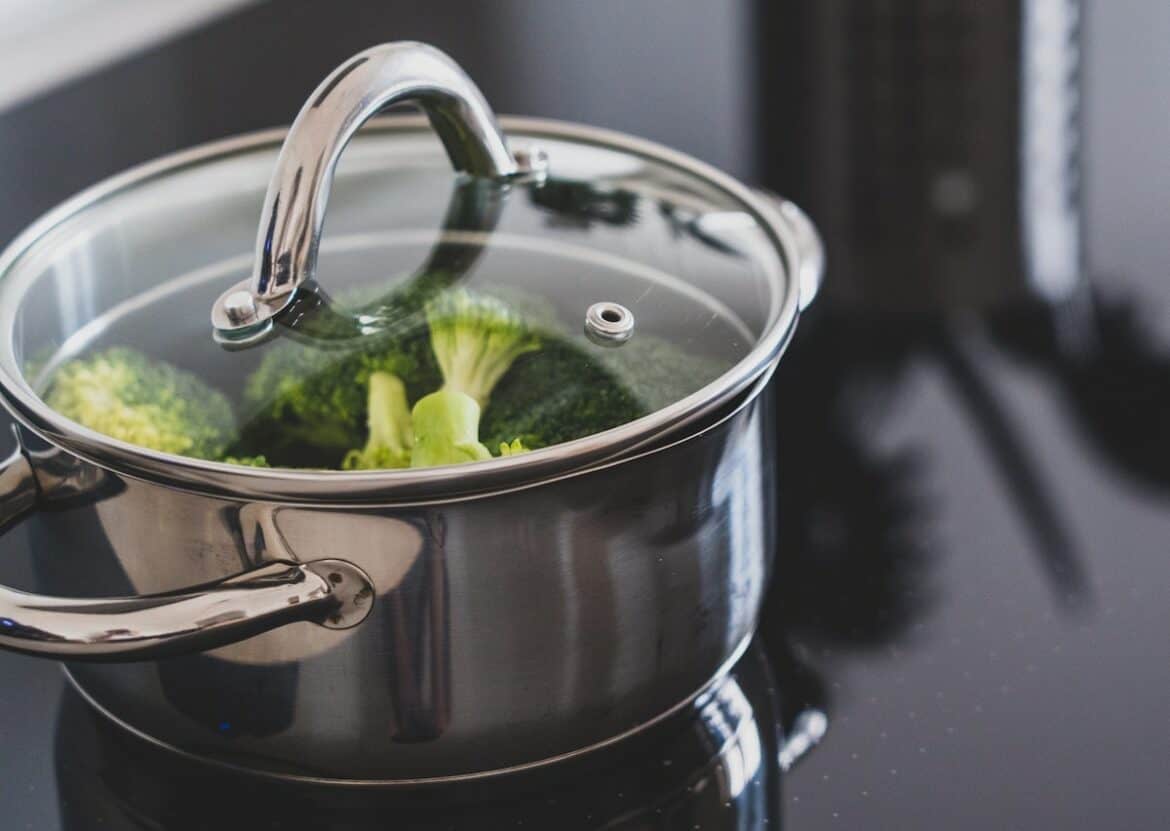 It is recommended that you consume between 2.5 to 6.5 cups of fruit and vegetables a day, depending on the number of calories you need. To consume these vegetables, you want to find a way to cook them that help preserves their nutrients, flavors, and colors.

Boiling and steaming vegetables are both popular cooking methods, and each has its own pros and cons, so knowing the differences between the two will help you decide which is better for you.

The different methods of cooking also mean the nutritional content in the cooked vegetables are different, as well as the retention of color and flavor in the vegetables. Understanding the differences will help you decide which is better for you!

When boiling vegetables, some of the nutrients leach out of the vegetables and back into the cooking water.

The longer you leave the vegetables on to cook, the fewer nutrients will be left in the actual vegetable.

This isn’t always such an issue. If you are cooking soup, stew or broth, you don’t mind the nutrients leaking out into the liquid, as you will still be consuming it anyways.

However, if you are boiling vegetables to be eaten on their own, the vegetables will have diminished nutrients and if you overcook them, they will be dull and have little flavor.

Sometimes boiling vegetables might result in them being very watery as well, which really isn’t appealing when biting into the veggie.

Some of the benefits of boiling include:

You only need to steam vegetables for a short amount of time before removing them from the heat.

The benefits of steaming include:

The Loss Of Nutrients

Boiling your vegetables definitely does result in a higher rate of the nutrients being drawn out of the vegetable and lost into the boiling water.

Steaming, on the other hand, preserves more of the nutrients. Some are lost during steaming, but not as much when compared to boiling.

Just make sure you actually get a high-quality vegetable steamer, it really makes a difference. The best one I’ve found is this one from Amazon.

While raw vegetables contain lots of good nutrients, cooking them actually makes it easier for your body to absorb helpful substances.

Cooking vegetables break down the outer layer and the cellular structure of some vegetables, which makes more nutrients available. This includes beta carotene in carrots and spinach.

It still remains that steaming is the best way to ‘unlock’ these nutrients, but still keeping enough of the nutrients in the vegetables without them seeping out into the water.

Not only does steaming help to retain more nutrients in vegetables, but it keeps them tasting better as well.

It is not only the taste that is better with steamed vegetables but the texture as well.

The goal of steaming vegetables is to steam them just until they are cooked, but still crisp and a little crunchy. This is so much more enjoyable than the sloppy, soggy vegetables you get if you boil them for too long.

Along with the flavor and texture, the colors of the vegetables remain bright and vivid when steamed. Boiling removes the bright and wonderful colors from vegetables if they are left to boil for too long.

What Can You Steam And Boil?

You don’t have to only steam or boil vegetables, other food items can be cooked well using the steaming or boiling method.

Meat can be cooked through steaming. Many people choose to marinate the meat with olive oil, spices, and herbs to allow the meat to have a great flavor once it is steamed.

You also do not need to turn food when you steam it, so the presentation of the meal is better as there is no risk of piercing or breaking the meat. It will also retain a great color, which is always a bonus when eating!

When steaming any ingredient, it is important to ensure that your ingredients are as fresh as possible. If you are steaming items together, there will be very little overlapping of flavors, so it is an ideal way to get a whole dish cooked using one method.

Many seafood dishes are cooked through steaming. Fish and shrimp turn out wonderfully when steamed, being soft and flaky, but still incredibly flavorful. These can be served with a simple sauce or lemon juice and you have a whole healthy meal.

You can also steam couscous, quinoa, and rice. To do this successfully you will have to layer the bottom grid with a cheesecloth to prevent the small grains from falling through into the boiling water. Steaming these grains also allow them to be al-dente, and not soft and mushy!

You can also steam spaghetti. This is probably the best way to make sure your pasta is al-dente.

Boiling is really only suitable for vegetables, and even then unless you are boiling vegetables in a stew, sauce, or broth, steaming is the better option. However, making a stew or broth using vegetables and meat can give you a delicious blend of flavors and a very hearty meal!

Is Steaming Better Than Boiling?

If you are just looking at nutritional content, flavor, and texture of vegetables, then steaming is a better option when compared to boiling.

Being able to retain nutrients is a clear advantage of steaming over boiling, and the taste and texture come into play if you are eating the vegetables on their own.

Boiling the vegetables in a soup or stew allows the veggies to pick up other flavors, and the texture doesn’t matter. Boiling also helps to kill more bacteria and viruses, which works towards food safety.

However, just looking at taste, flavor, and nutrient content, steaming is the way to go if you want nutrient-rich, tasty, crunchy, and beautifully colored vegetables!

Does steaming take longer than boiling?

Steaming does not take longer than boiling. You do not steam veggies for as long as you would boil them, as steaming is intended to cook the food until it is just not raw, but it still has a crisp texture and vivid color. Boiling is usually done for too long until the vegetables are fairly mushy.

Blanching uses the boiling technique to partially cook food through, and the food is then placed directly into ice-cold water.

When blanching, the vegetable is left in boiling water for a few minutes, which helps it bring out its flavor and keep its crisp texture. Placing the vegetable in ice-cold water prevents it from cooking further.

This technique is good to use for vegetables such as broccoli and carrots.

How long do meat and fish have to be steamed for?

Depending on the size of the protein, and how well it needs to be cooked, meat and fish can be cooked in 3-10 minutes. Steaming occurs at 212 degrees Fahrenheit (100 degrees Celcius), it takes less time to steam meat than it does to poach it, which is done at 140-170 degrees Fahrenheit.

The obvious difference between steaming and boiling is the method by which each is done.

To boil vegetables, you place the raw veggies into a pot of boiling water until they have cooked through.

To steam vegetables, you put the veggies on a closed pan or dish above boiling water, allowing it to capture the steam and cook the veggies.

These two different methods also mean that the cooked vegetables are different. Steamed vegetables retain more nutrients than boiled vegetables, and have a brighter color, a crisper texture, and a fairly better taste.

When cooking vegetables on their own, steaming is recommended. However, if you are cooking a stew or soup, boil the vegetables along with the other ingredients.

Up Next: The Complete Guide To Reheating Steamed Vegetables

The Best Potato For Fries – Starchy Vs Waxy Potatoes