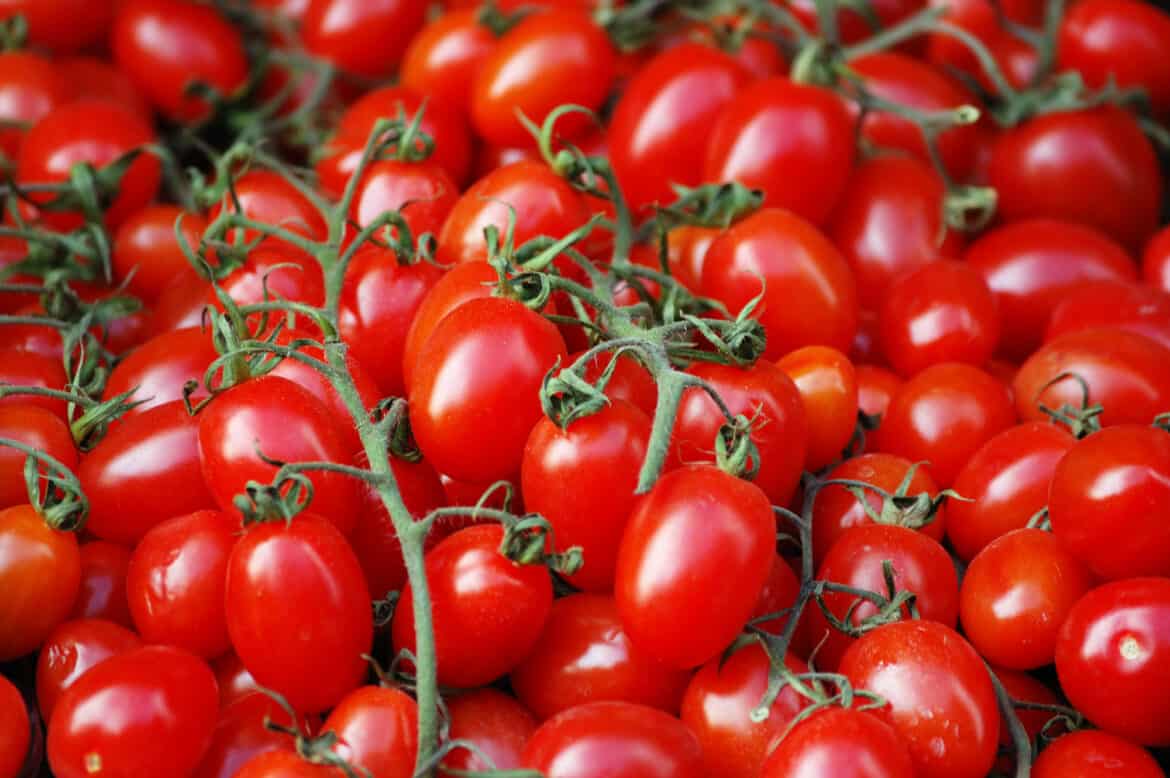 Plum tomatoes are a staple in many kitchens, and they are popularly used in Italian cooking to make tomato sauces and similar red sauces.

A good batch of fresh plum tomatoes, or canned plum tomatoes, helps to make some beautiful dishes — their low water content makes them ideal for this!

However, if you do not have plum tomatoes in the kitchen, there are a few other options you could use to make your favorite pasta sauce or dish.

Keep reading to find out the best substitutes for plum tomatoes, and how they can be substituted in.

Plum tomatoes are fairly unique. They have an egg-like shape, a low water content, and few seeds, so they are great to use when you want a rich tomato sauce!

Other than using them for tomato sauce, plum tomatoes can also be roasted or canned, and even sliced and served fresh.

Plum tomatoes are great to keep in the kitchen, but when you can’t find any and need something else to use, regular tomatoes, canned tomatoes, cherry tomatoes, and tomato paste are great options to use — plus more!

Think about how you would be using the plum tomatoes first, and then take a read through the below to find the substitute that would work best for you!

There is quite a wide range of substitutes that you can use in place of plum tomatoes, depending on the recipe you are making and whether the plum tomatoes were canned or fresh.

Read the below suggestions on the best substitutes for plum tomatoes, and find the one that suits your recipe best!

Regular grocery store tomatoes are a good substitute for fresh plum tomatoes, especially when they are not in season.

The one thing to keep in mind is that regular tomatoes do contain more water than plum tomatoes, so you would have to alter some of the other ingredients a bit to make up for this.

A good way to counteract the added water is to add some tomato paste to a sauce. It is also a good idea to remove some of the seeds before adding regular tomatoes to a sauce or before placing them in a salad.

Other than that, the tomatoes are a similar size (if not shape), and while regular tomatoes might be milder, they share a similar taste too.

Canned tomatoes are probably the best substitute you could use in place of plum tomatoes when making a rich tomato sauce.

They are widely available and affordable too, and they can sit in the pantry for quite some time!

This will give you about the same amount and ensure that the recipe isn’t altered too much.

Sun-dried tomatoes can either be bought dried or in cans of oil, and both can be a good addition to a recipe calling for plum tomatoes.

You will need to place the sun-dried tomatoes in some hot water before adding them to a recipe so that they can absorb some moisture and not be too dry when added to a dish.

The benefit of using sun-dried tomatoes is that they are very rich in flavor, and they can add some great taste to sauces and stews.

Add in less than what you would have added plum tomatoes, and taste from there, adding in more if you need to along the way.

Tomato paste and plum tomatoes are a good match and good substitutes for each other, as they are both thicker in consistency, less watery, and full of flavor.

The tomato paste will not change the texture or taste too much in the recipe when used in place of plum tomatoes.

You will not need to add in the same quantity of tomato paste as you would plum tomatoes, so start off with around 2-3 tablespoons depending on the recipe and taste from there, adding in more if you need to.

Tomato paste is obviously only a good substitute for plum tomatoes when you are making a sauce or stew, as it cannot be served fresh.

Cherry tomatoes are slightly smaller than plum tomatoes, but they can make for a good substitute if you get the quantity right.

It is helpful to note that cherry tomatoes do have a higher water content and more seeds than plum tomatoes, so you might want to remove the seeds before using them.

Some tomato paste can also be used to thicken up the consistency if the cherry tomatoes add too much water to a dish.

Cherry tomatoes can also be used as a substitute for plum tomatoes in salads and fresh dishes too.

The one issue with using grape tomatoes is that you will have to buy quite a few as they are so much smaller in size — chopping and preparing them might take some work.

However, they have a great flavor to them and will be a very good addition to a sauce or salad when you do not have plum tomatoes.

You can pretty much prepare grape tomatoes the same way you would prepare plum tomatoes, just on a smaller scale.

If you cannot find any tomatoes or do not want to use any of the other tomato substitutes, then you can use red bell peppers instead.

Red bell peppers are a good substitute for plum tomatoes in fresh salads, and if you roast them, you could use them in sauces as well.

The sauce will obviously not be very tomato-tasting, but it will be red and it will be a lovely sweet sauce that can be used much the same as a tomato sauce. Red bell peppers in salads offer a delicious crunch and freshness.

If you are lucky enough to find some beefsteak tomatoes in your grocery store, then they are an absolute treat in place of plum tomatoes!

The only issue really is that they are not very easy to come by.

Beefsteak tomatoes are known for being large, juicy, and meaty, and are really beautiful served raw, whether in a salad or whether they are added to a ceviche. They are also great to use as a base for a fresh dip or a rich tomato sauce.

Beefsteak tomatoes also have a sweet flavor to them, which adds a bit of a depth of flavor to a dish too.

Passata is similar to tomato paste, but it is an uncooked puree that is free from seeds and the skin.

It is thinner than tomato paste and does not hold as rich of a flavor, so you will need to use more passata than you would puree.

Passata is actually a great option for when you are making a marinara sauce or a bolognese, but it does also help to add in a tablespoon or two of tomato puree to build up the richness as well.

If you were using the plum tomatoes to make a pizza sauce, then passata would actually be your best option! With a little bit of salt, it can be added directly onto the pizza base before the rest of the ingredients.

Now that we’ve covered some of our favorite substitutes for plum tomatoes, here are some related questions that we thought you might have.

Are plum tomatoes and Roma tomatoes the same thing?

Roma tomatoes are a type of plum tomato. As they are low in water content and have chewy flesh, Roma tomatoes are ideal to use for sauces and stews. They are often used to make tomato paste thanks to their rich flavor!

How many cherry tomatoes do I need to replace a plum tomato?

For one plum tomato, you can use between 15 to 20 cherry tomatoes. How many you use will depend on the size of the cherry tomatoes, whether they are small or on the larger side, and whether the recipe requires them to be diced or whole.

Can I use diced tomatoes in place of crushed tomatoes?

Is A Tomato A Berry? – The Ultimate Guide

How Long Do Tomatoes Last?

How To Tell If A Tomato Is Bad