Home Foodsguy Kombucha Vs Apple Cider Vinegar – What’s The Difference?
FoodsguyThis vs That 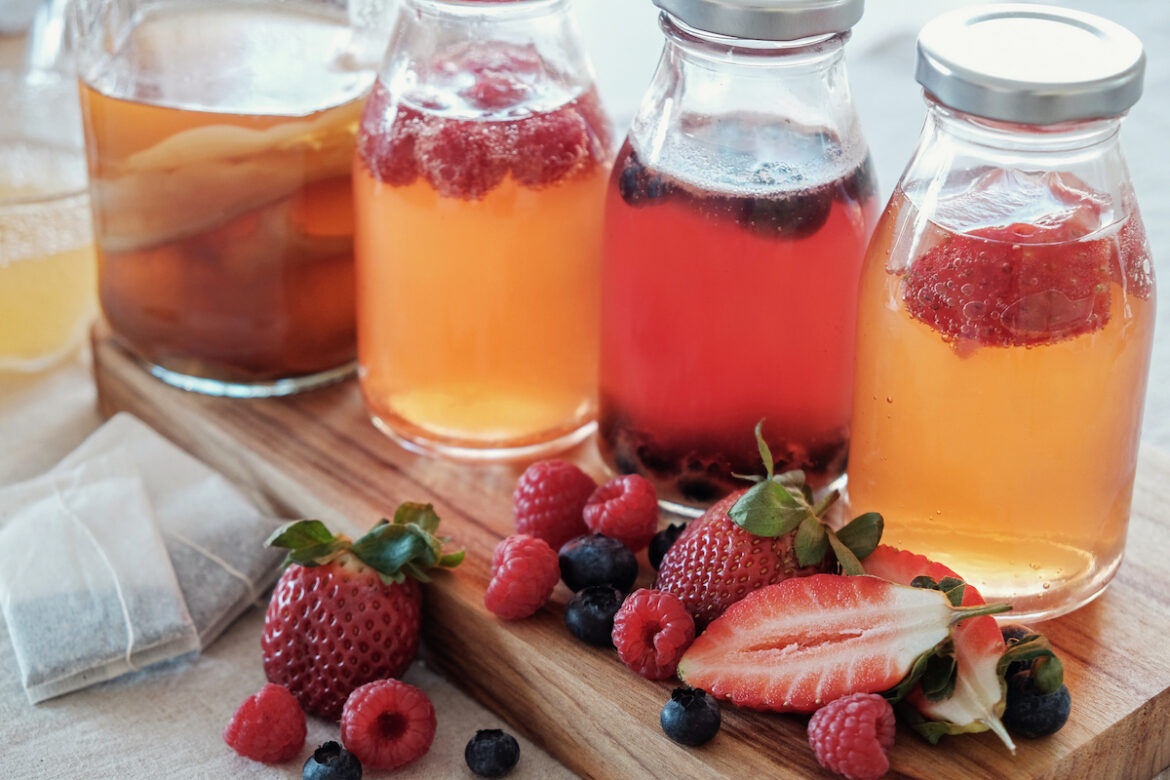 There are many new trends and TikTok’s making their rounds claiming that apple cider vinegar is just as good, if not better than kombucha. We all know kombucha is extremely healthy, but can it really be outmatched?

Today, we will explore exactly where the confusion came from by looking at each ingredient in more depth.

We will look at how they are made, their characteristics, flavors, and uses. And naturally, we will compare the nutritional claims made around them and whether or not they are true.

Kombucha is a very unique fermented beverage that is made from tea. Originally an Asian traditional drink, it has now flooded the Western markets. Today, you will be able to find many different kombucha products in your local corner store!

But, why did this drink become so popular? There are two main reasons: the first is its flavor and the second is the health benefits it provides.

How Is Kombucha Made?

Kombucha is a type of fermented tea. The base ingredients for this beverage are often black tea and cane sugar. You can use other tea, but it will not give you the same flavor as traditionally brewed kombucha.

The fermentation process for kombucha is started by using a SCOBY. This is an acronym that stands for “symbiotic culture of bacteria and yeast”. A SCOBY functions just like a sourdough starter but is different in build.

When the tea starts fermenting, the sugars are converted into alcohol and acid. This is what gives kombucha its unique flavors and exceptional health benefits.

A large amount of bacteria present in the SCOBY (and ultimately the kombucha) is what makes this drink popular.

All in all, you get a delicious and healthy beverage that could potentially help improve your gut health, has detoxifying effects, and helps boost your immune system. No wonder it is so popular!

It contains loads of probiotics.

Kombucha should preferably have a pH level between 2.2 and 4.5. Anything higher and you may risk ingesting harmful bacteria. It also contains loads of protein and not a lot of sugars. It contains loads of antioxidants and probiotics.

Physically, the appearance and flavor of kombucha vary a lot. Homemade versions should have a bright orange-brown color to them and should be completely clear of any particles.

The drink is also sometimes naturally effervescent because of the gas bubbles formed by the bacteria.

That being said, this beverage has become commercialized. They are now often carbonated and flavored. You can get peach-flavored sparkling kombucha as an example!

While this does take away from the natural flavors, it allows more people to ingest it who don’t usually like yeasty flavored drinks. At least you are still getting some of the benefits of the drink.

Today, it is also possible to find hard kombucha. This is ultimately kombucha with an alcohol percentage above 5%.

As we have mentioned before, when the tea ferments, the sugars are converted into alcohol and acid. Hard kombucha just contains more of the alcohol part.

Kombucha is only really consumed as a beneficial drink. What this means is that people only really drink it as a beverage to get the health benefits it provides.

But, as always, because not all people like drinking it, they have come up with new fun ways to incorporate it into their diets.

Kombucha is now a popular addition to dressings and condiments alike. They are also used in meat marinades to help tenderize the protein. And, they can even be used in basting sauces.

Furthermore, they can be incorporated into ice lollies or ice creams, and make fantastic refreshing treats.

Remember, just because an ingredient initially seems savory, doesn’t mean that it should be limited. You can even use kombucha in cake frosting and fillings! The possibilities are truly only limited to your imagination!

What Is Apple Cider Vinegar?

Apple cider vinegar is a household staple ingredient in many cultures. And yet, most people still only think of it as a type of vinegar for food or cleaning products.

However, you would be surprised as to how many benefits this vinegar can provide!

But first, what is apple cider vinegar? This is a product made from apples that have been crushed up and fermented.

So, like kombucha, it is a product whose sugars are converted to alcohol and acid. And, it also has added yeast and bacteria.

The production of apple cider vinegar is pretty straightforward and is truly nothing special. But, it does produce a much more acidic product as compared to kombucha.

Apple cider vinegar consists of 94% water and about 5% acetic acid. The rest is usually just carbs. This vinegar, like most others, doesn’t contain any fats or proteins.

The color of apple cider vinegar does vary a lot. You can find pale pink products, clear translucent golden products, and even orange juice-like liquids. The color of the vinegar depends on how much it has been filtered.

Naturally, the more it is filtered, the clearer it will become. This translucency is aided by additives that help remove the color, like tapioca and corn starch (as natural examples).

Now, despite being a “basic” ingredient, it has some of the most versatile uses. Apple cider vinegar is used in both the sweet and savory sides of the kitchen. In baking, it functions as a leavening agent and flavor balancing agent.

It is a functional ingredient that is also added for a specific purpose. Even if that purpose is to add acidity!

As you have most likely already deduced, there are loads of differences between apple cider vinegar and kombucha. Virtually the only similarity is that they both are a type of fermented liquid made from a combination of yeast and bacteria.

But even then, the types of “starters” used to make them are also very different. So, let’s break it down.

Apple cider vinegar is used as vinegar and consists of 5% acid. Kombucha, while being slightly tart, is a beverage and not nearly as acidic.

The flavors will also be completely different. Kombucha has a semi-sweet flavor with a hint of yeastiness.

However, the main flavor comes from the tea and accompanying additives. In comparison, the flavor of apple cider vinegar is acidic with hints of apples.

The texture and color are also different between the two. Kombucha is a light brown-orange color and is semi-translucent. Apple cider vinegar comes in varying shades, depending on how filtered it has been.

And finally, when we look at the nutritional build of each, there are some differences but quite a few similarities!

Perhaps most notable is the fact that apple cider vinegar and kombucha both contain lots of probiotics, which can encourage a healthy gut and digestive system!

Why Do People Confuse The Two?

The main reason people confuse these two ingredients is because of a recent spike in weight-loss claims.

There is a massive increase in social media platforms stating that consuming a shot of apple cider vinegar a day will help you lose weight.

Well, people started confusing it with kombucha (especially because they are both fermented), and here we are! Unfortunately, there is absolutely no scientific research backing this claim.

If you’re looking to make your own kombucha at home, here’s a great video on how to do so from the folks over at Bon Appétit!

Up Next: Can You Bake Cakes In Glass Pans?

Can You Bake Cakes In Glass Pans?

Can You Eat SCOBY?