The Absolute Best Sugar For Kombucha 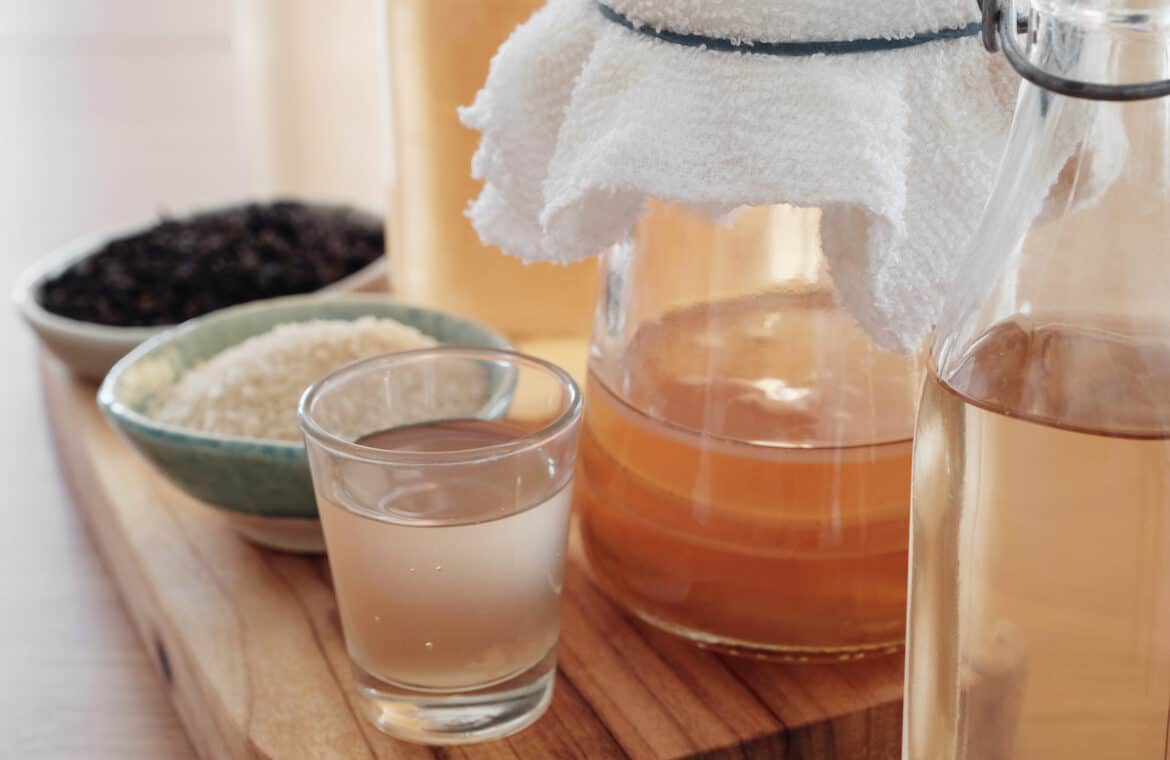 Kombucha is a fermented sweet tea that was around for many centuries before the mainstream media got wind of it and made it the popular, healthy, and slightly hippie drink it is today. It’s a fizzy beverage that is a great feature for summertime patio meals, especially for those who avoid alcohol.

Kombucha is full of probiotics and incredibly healthy vitamins, minerals, and amino acids but it has one major flaw: it’s expensive to buy. There’s a simple fix for this problem though, and that is to brew your own.

Next to the starter culture, the most important ingredient in kombucha is sugar and you must get the type of sugar right before you try to brew your own at home.

What is the best sugar for kombucha? Simple white sugar, preferably organic. Our money is on Anthony’s Organic Cane Sugar, to be specific.

There are a few alternatives that you can try, but the best kombucha is made using simple white cane sugar. This article will explain exactly why white sugar is the best, and what your other options are if you choose to get experimental.

Why Sugar is So Important for Brewing Kombucha

A Symbiotic Colony of Bacteria and Yeast, or SCOBY, is the most important ingredient in the brewing of Kombucha. Without it, there is no brew.

However, in a chicken-or-the-egg type dilemma, you also can’t make Kombucha without sugar because it is the sugar that feeds the yeast and ferments your tea.

Most brewers will ferment their Kombucha twice. During the first fermentation, the bulk of the sugar is added and, if you leave it long enough, will be mostly converted to ethanol and carbon dioxide (CO2), leaving a very low-sugar beverage.

If you’re worried about brewing an alcoholic beverage, you don’t have to. The bacteria in your SCOBY will consume the alcohol and turn it into amino acids and other vitamins and minerals.

If you don’t use enough sugar, your SCOBY won’t have anything to eat, throwing the fermentation process off and increasing your chances of a spoiled batch.

If you add too much, the yeast will run rampant and create too much alcohol. This is not a happy accident. As the ethanol increases, the flavor deteriorates.

The second fermentation only requires enough sugar to create carbonation. The less sugar you add, the flatter your beverage will turn out.

The Best Sugar for Making Kombucha

When you’re brewing kombucha, the type of sugar you use will alter the flavor and fermentation process.

A big part of the brewing process requires the conversion of sucrose to ethanol, and the easiest conversion is achieved by using white sugar, or cane sugar.

It’s not only the easiest sugar to break down, but it’s also the easiest to source since it’s the most common type of sugar on the market.

Your kombucha won’t care about specifics, such as organic or raw, but if you’re concerned about the quality of your sugar, and organic cane sugar will have the least amount of chemicals tainting your brew.

It’s certified organic, non-GMO, and Gluten-free, you can buy it in bulk and the manufacturers have a sense of humor, which is nice to see in a company.

Experimenting with Sugar in Kombucha

If you’re confident in your kombucha brewing skills and want to try experimenting with some different types of sugar to see how it affects the flavor of your brew, there are a few options you can try which usually yield tasty results.

Evaporated cane juice is slightly less processed than conventional white sugar, but still relatively simple for your yeast to break down.

Coconut palm sugar is also a good choice, but it contains more minerals than white sugar, so is more likely to affect the flavor and fermentation timing. You’ll have to keep a close eye on your brew to make sure it doesn’t sour.

You can try brown sugar, maple syrup, agave, or molasses, but each of these options will add noticeable flavors to your drink and have varying levels of sucrose, so the yeast will have a tougher time converting it to ethanol.

There is a higher chance that your brew won’t ferment properly and may go off.

You can combine sugar as well, so if you’re just starting to experiment, don’t be shy about cutting your white sugar with one of these options to start slow.

The Worst Sugar for Making Kombucha

Artificial sweeteners like aspartame or sucralose won’t work, nor will Stevia. The yeast won’t be able to convert this type of sweetener to ethanol and CO2.

Raw honey is also not a good choice for kombucha, even though it sounds like the flavor would be amazing. Unfortunately, honey has it’s own naturally occurring bacteria and this will interfere with your SCOBY. You can use pasteurized honey.

Kombucha also can’t ferment lactose. Save this for your kefir.

How Much Sugar for Kombucha

To brew kombucha well, you’ll start out using approximately 1 cup of sugar per gallon of kombucha produced. This may sound like a lot of sugar, but it’s for the yeast to eat, not you.

By the end of the fermentation process, there will only be left between 2 – 6 g of sugar per 8-ounce glass.

It’s difficult to measure but, without a doubt, less than the amount of sugar present in a glass of orange juice, which has closer to 24 g of sugar Even fresh-pressed carrot juice has 13 g of sugar per 8 ounces.

If you’re happy with a standard tea kombucha without carbonation, you only have to go through the first fermentation process. If you’d like it flavored and/or carbonated, you’ll have to do a second fermentation.

During the second fermentation, you can add fruit, ginger, pasteurized honey or even floral elements for a unique taste. Adding more sugar at this point will increase the fizz of your brew.

Some of the most popular flavors I’ve come across are:

To use any of these flavoring ingredients, chop them up into small pieces, add them to your kombucha brew after the first fermentation, seal the container tightly and let it ferment for an additional 3 – 10 days.

You can strain the chunks out or leave them in for texture – they’re completely edible and very healthy.

Too much sugar is not generally a side effect of drinking kombucha because, as previously mentioned, the sugar itself gets fermented and is largely eliminated during the brewing process.

Drinking too much kombucha can have a few downsides though, which are important to keep in mind before you drink the entire gallon of delicious nectar you just brewed.

On the one hand, it’s full of probiotics and antioxidants that will keep you healthy and energized.

On the other hand, it contains FODMAPs which can irritate sensitive stomachs and it’s also carbonated which can lead to bloating and digestive discomfort.

What is a SCOBY hotel?

Just as a human hotel is a place where humans go to rest, so is a SCOBY hotel a place for resting SCOBYs.

In your first fermentation, you either start with a purchased mother SCOBY from an established brewer or you can grow your own using purchased kombucha.

Either way, after you have one established SCOBY, each batch of kombucha you brew will result in a baby SCOBY.

If you’re a regular brewer, you’re going to need to either give away these baby’s frequently or settle them into a hotel.

It’s a great idea to have at least a few babies stored just in case something happens to your main mother, and placing them in a separate jar dedicated exclusively to baby SCOBYs is the easiest way to start your own hotel business.

How to make kombucha fizzy?

For most kombucha fans, a beverage without fizz leads to disappointment. If you’re new to brewing, getting just the right amount of carbonation is something of an acquired skill set.

To help, here are a few extra carbonation tips:

What is SCOBY jerky?

SCOBY jerky is made by marinating and dehydrating thin SCOBYs, cut into strips. If your SCOBY hotel is full, this is a delicious, meat-free way to enjoy your own homemade jerky.

It’s so surprisingly “realistic” that if you serve it to friends, they’ll wonder what kind of meat you used.

The Best Substitute For Basil In Pesto

How Long Does It Take For Ice To...

Strainer Vs Sieve – What’s The Difference?

The 11 Best Substitutes For Bulgur

Can You Cook Eggs In An Air Fryer?

Can You Mix Olive Oil And Vegetable Oil?

How To Cook Swiss Chard So It Isn’t...

What Is Baker’s Flour?

How To Cook Beyond Burgers (And Other Plant-Based...