Home Foodsguy Huaraches Vs Sopes – What’s The Difference?
FoodsguyThis vs That

Huaraches Vs Sopes – What’s The Difference? 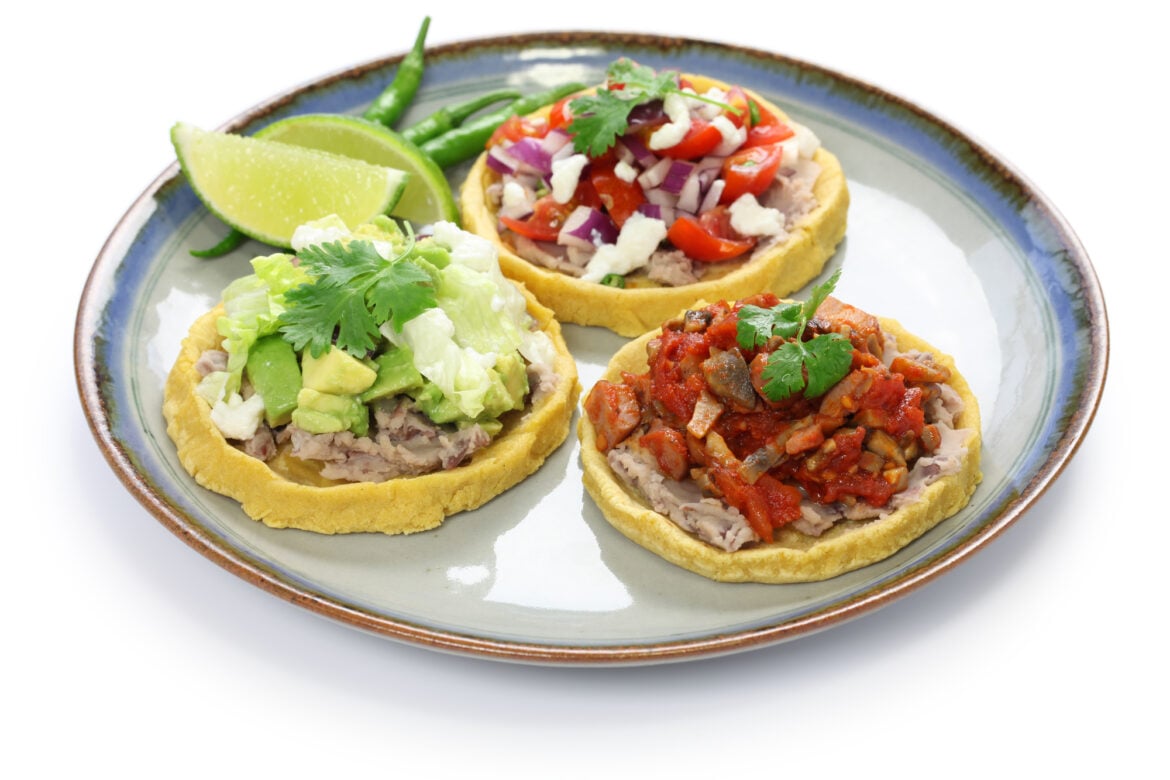 We love Mexican cuisine, and we know we aren’t alone — its popularity is still growing rapidly every year! For this reason, more and more lesser-known dishes are coming to light.

Huaraches and sopes are two such dishes. Unfortunately, these can look very similar and no one seems to clarify their differences.

So, how do huaraches and sopes differ from each other? Huaraches are made with masa dough that has been stuffed with pinto beans, shaped into an oblong form. It is also very large and about 1/4-inch in thickness. Sopes are made only from masa dough shaped into a thick disc and pinched to give it a unique lip.

Ready to learn more? Keep reading for a breakdown on huaraches and sopes, including how they are made. This way it will be much easier to compare their similarities and differences at the end.

Huarache, also commonly spelled guarache, is an extremely popular dish in Mexican cuisine. It is most popular in Mexico City, but can also be found in American cities such as Los Angeles, San Francisco, and New York.

The name “huarache” comes from a type of popular sandal that locals wore at the time. Because they thought the oblong shape of the dough resembled it so well, the name came naturally.

In the simplest of explanations, huarache is a type of Mexican flatbread with a bunch of delicious toppings. The way the dough base is made varies from family to family, but all include two elements: masa dough and pinto beans.

Once the dough is shaped like an oblong and fried, it is topped with ingredients like salsa, vegetables, herbs, and meat. Finally, the dish is finished off with a queso fresco sauce.

There are some accompaniments huarache can be served with. Traditionally, fried cactus leaves (or nopales) are the accompaniment of choice for locals. In Western eateries, huarache is often served with beer, nachos, and empanadas.

Let’s start with the dough part of the recipe. If you are making traditional huarache, you will need to prepare the dough and mashed pinto beans separately.

First, shape the masa into a beautifully round dough ball. Shape a little hole or well in the middle. Then, press the mashed pinto beans into the center of the ball.  Pinch the top closed and re-shape the perfectly round ball.

Next comes the shaping part. Many people press these pinto-filled balls flat using a tortilla press (this one is pretty versatile). However, you can also just use a rolling pin.

The best option is a huarache press (like this one), but they can be hard to find in stores. Each layer should be about 1/4 inch thick. It’s okay if beans are oozing out of the dough.

Next, you can heat a skillet over medium-high heat. Then, fry each side of the huarache for roughly 2-3 minutes.

Once the huarache is cooked, you can top it with tomato salsa, followed by the remaining toppings and the sauce.

This dough can also be made by kneading mashed pinto beans directly into the prepared dough. This technique does allow the beans to be more equally incorporated.

Huaraches are very large in size, measuring at roughly 10 to 12 inches in length, but they can be larger or smaller than this. As we have mentioned, the dough is shaped into a sandal-like oblong shape.

Once fried in a hot pan, the dough is topped with whichever toppings you choose. Usually, you will see a fresh tomato salsa, meat, herbs, and a queso fresco sauce.

There are an endless amount of toppings that can be used for making huarache. First is the salsa, arguably the most important element. The salsa is always added at the bottom. Think of it as the tomato sauce for pizza.

Common types of salsa used are either red or green. Many people also like to bulk up on spicy red onions and cilantro. And, of course, lemon juice has to be included for that tangy flavor!

After the salsa has been added, other vegetables and herbs can be included if you’d like. Popular choices include onions, potatoes, carrots, cabbage, cilantro, parsley, and fennel.

And finally, protein isn’t necessary, but it is highly recommended. Traditional options include minced beef or pork, as well as pickled tongue (or lengua). However, you can use virtually any meat that you’d like.

Finally, the ingredients are all topped off with a delicious queso fresco sauce.

Sopes are another popular traditional Mexican dish. It actually served as inspiration for huarache, but sopes have an even broader set of toppings and different preparation techniques.

Virtually every town in Mexico has their own variation of sope, and families even argue over which is best!

Sopes quickly became a popular Mexican street food and it also goes by other names like picadita or pellizcadas.

Want to learn how to make your own version of sope? Let’s jump right into each of the elements.

Sope is also made with masa dough, but it doesn’t have any mashed pinto beans worked into it. This dough is slightly flattened and then rolled out into a small, thick disc.

Once rounded and rolled out, the sides are flipped up a little and pinched around the edge. It almost resembles a small plate that has a lip. Another variation is flat sopes, which look more like a very thick tortilla.

Both of these types of sopes get fried in a hot pan, but they are only cooked until they begin to brown — they aren’t crisped up. This leaves them quite soft and pliable.

The thickness of the dough acts as a sturdy serving vessel for all of the toppings.

Once the sopes are cooked, the toppings are added and the dish is served immediately. Sometimes it can go into an oven so that the crumbled cheese melts, but this is optional.

Sopes are usually between 4-6 inches in diameter. They can be smaller, but they are rarely bigger. They also have an average thickness of 1/2 to 1 inch.

These dishes are shaped into a round disc, often as perfect as you could get them. And of course, let’s not forget about their incredibly unique lip around the edge.

After the masa dough has been fried, the toppings are added and the dish is immediately served.

Whatever you can think of, you can use it as a topping for sopes. It may seem ridiculous, but the concept of a lipped dough plate more accurately represents the name of the dish than an actual topping.

Salsa roja is a type of red sauce that is often used on sopes. This sauce is quite spicy and is primarily made from red tomatoes, chili, garlic, onion, salt, and pepper.

Another frequently used option is the green sauce, salsa verde. This is another spicy Mexican sauce that is made from tomatillos, onions, jalapenos, and cilantro.

Meat is also a popular addition, but again, you can add pretty much anything that you can think of.

What’s The Difference Between Huaraches And Sopes?

As you can see, these two traditional Mexican dishes are very similar (and very popular), particularly as there are no set toppings for either dish. Sopes even served as inspiration for huarache; no wonder people get them confused!

The biggest and most noticeable difference between these two dishes is the dough and the shape.

When making huarache, the stuffed dough is pressed into a large, oblong-shaped sheet. Sopes are much smaller in size and much thicker. They are also circular in shape and have pinched sides that create a clear edge.

Sopes are briefly browned in a hot pan. This allows the outside to crisp up while the inside stays very soft and pliable. But, for huaraches, you can fry each side for 2-3 minutes so that they become crisp and rigid throughout.

When it comes to the toppings, again, there is nothing that specifically sets them apart from each other. You can use any topping that you’d like.

Burrito Vs Enchilada – What’s The Difference?

Tostada Vs Chalupa – What’s The Difference?