Home Foodsguy Burrito Vs Enchilada – What’s The Difference?
FoodsguyThis vs That

Burrito Vs Enchilada – What’s The Difference? 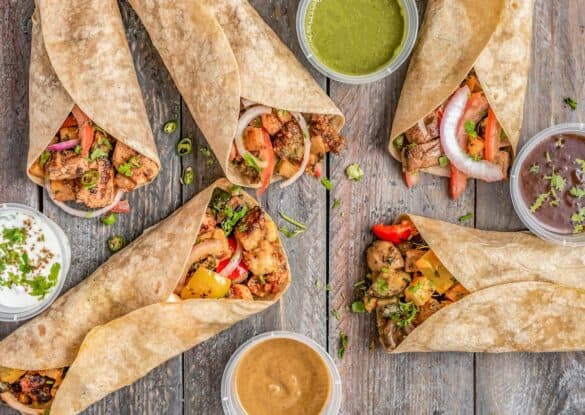 When we think of Mexican food in America, what often comes to mind are filling and delicious burritos or amazing enchiladas.

While these two choices are by no means the only great Mexican foods that have made it North, they are two of the most popular and with good reason!

Both enchiladas and burritos are convenient, endlessly customizable, and super delicious.

This makes them a popular choice for sale at many fast-casual and sit-down Mexican restaurants. The fillings of burritos and enchiladas may be similar, but how they’re prepared makes them unique.

However, you might see them on the menu and wonder what’s the difference between them?

Keep reading to learn what burritos and enchiladas really are, the main differences between them, and how to make your own versions at home.

What Is A Burrito?

When you think of a burrito, you might envision a large flour tortilla packed with different ingredients such as rice, beans, guacamole, vegetables, meats, cheeses, and sometimes even eggs and other breakfast ingredients.

Typically both ends of the tortilla are rolled into the center so that the filling is completely contained within the wrap. Once stuffed, it can be wrapped in tinfoil and eaten by hand.

This style of burrito, while inspired by the Mexican dish, actually has its roots in the Mission district of San Francisco.

So if you don’t live in the Southern part of the US close to the Mexican border, it is likely that the type of burrito you’re most familiar with is the Mission-style burrito.

The original style of burrito from Northern Mexico is similar, but generally much more limited in terms of its fillings. Typically, you will find no more than one or two fillings, such as beans and vegetables, inside a traditional burrito.

Other traditional fillings for a Mexican burrito might include things like potatoes, beans, rice, sauce, vegetables, meat, and cheese.

These burritos are often much smaller than the ones we’re used to in the States, but simplicity can be really delicious too, so I definitely suggest giving this style a try.

Over time, the Mission-style burritos have grown in popularity around the world and have evolved to include endless combinations of fillings based on location and the culture preparing it.

You can find seafood burritos, breakfast burritos, burritos made with local and seasonal ingredients, vegan and vegetarian burritos, and basically any combination of fillings that you can imagine.

When it comes to burritos and creativity, the sky is the limit so get in your kitchen to find your favorite combo.

What Is An Enchilada?

It should come as no surprise that enchiladas in some form have been eaten in Mexico for thousands of years.

They are believed to have originated in Mayan or Aztec cultures (probably with variations in both) and initially may have been simple corn tortillas served in chili sauce.

As early as 2000-2500 BC, the Mayan people of the Yucatan peninsula were using corn tortillas to wrap their food and then smothering them in a rich sauce.

However, it is thought that the Aztecs were the first to use chili peppers (a crucial ingredient) to create the foundation for modern enchiladas.

Moving forward a few thousand years, it is likely that the current enchilada might not be completely recognizable to its creators. That doesn’t mean it is any less delicious.

Current enchiladas are made out of corn tortillas, which are wrapped around a filling such as rice, beans, meat, cheese, vegetables, or sauce.

Once wrapped, the enchiladas are smothered in a delicious salsa and some queso fresco (a Mexican cheese made from fresh cow or goat milk).

The ends of the enchiladas are often left open. That means the corn tortilla is wrapped around the filling, but the ends aren’t folded into to completely contain the contents.

Depending on where you get the enchiladas, they may be baked with the sauce and cheese to create a rich and creamy dish or you might enjoy them just as they are.

Since they are covered in sauce, you will likely need to use a knife and fork to enjoy your enchiladas.

When you get an enchilada at a restaurant they will often be served with beans and rice on the side, maybe some more salsa, and possibly other side dishes.

What’s The Difference Between Burritos And Enchiladas?

While it may seem like burritos and enchiladas are basically the same thing: tortillas wrapped around different fillings, there are some distinct differences that make them special.

Both have their roots in traditional Mexican food culture, though they have evolved over time in America.

Burritos are almost always made with flour tortillas. And the Mission-style burrito we’re familiar with is wrapped around a variety of fillings such as beans, rice, meat, cheese, guacamole, and salsas.

Once stuffed, they are generally wrapped in tinfoil for an easy-to-eat meal on the go.

Enchiladas are made from corn tortillas instead of flour tortillas. While they can have similar fillings, they may be smaller than burritos.

The other key difference between them is that enchiladas are smothered in a delicious sauce and queso fresco.

The other main difference between enchiladas and burritos is that the ends of the burritos are often folded inwards so that the contents are completely contained.

Enchiladas, on the other hand, leave the ends open, wrapping the tortilla around the filling but not folding the ends in.

Rather than eating your enchiladas by hand, you will need a knife and fork to enjoy these decadent delights.

Should I Eat A Burrito Or An Enchilada?

Now that you know the major differences between an enchilada and a burrito, you need to decide which one you want to enjoy. You can make this decision based on a couple of criteria:

What Is A Wet Burrito?

Wet burritos are another American-inspired take on the Mexican traditional burrito.

Much like the Mission-style burrito, they are made with flour tortillas and packed with delicious fillings that range from shredded meats to beans to rice, veggies, cheese, and sauce.

The main difference between a wet burrito and a regular burrito is that once it is wrapped, it is covered in red sauce and cheese.

This sauce might be an enchilada sauce or it could be a variation made with tomatoes. The wet burrito is then placed in the oven to melt the cheese and warm the sauce.

Since it is covered in sauce and heated, the wet burrito is not going to be a convenience food like a regular Mission-style burrito.

It will require you to sit down and enjoy it with a knife and a fork, unless you want to get smothered in sauce yourself!

What’s The Difference Between A Wet Burrito And An Enchilada?

As you’ve seen, both wet burritos and enchiladas are covered in sauce and cheese and then baked up to perfection.

However, the main difference between the two is that a wet burrito is made using a flour tortilla, while an enchilada uses the traditional corn tortilla.

The sauce used on enchiladas may be used on a wet burrito, but often it is adapted slightly by adding some tomato sauce to the mix.

You could essentially make your favorite enchilada using a flour tortilla and turn it into a wet burrito instead if you prefer flour to corn.

How Do You Make A Rice And Bean Burrito?

Making a delicious burrito at home is pretty easy and a great way to take a full meal with you when you’re having a busy day. The fillings are completely customizable based on your preference. This recipe is one of my favorite burritos.

How Do You Make An Enchilada?

I highly recommend searching how to make an authentic enchilada since there are so many great recipes from Mexican chefs out there. If you’re looking for a simple version, then this recipe has you covered.

What Is a Chimichanga?

Chimichangas are essentially deep-fried burritos. They are made with a flour tortilla and stuffed with the same variety of ingredients as a regular burrito, but once stuffed they are deep-fried.

Some restaurants will also smother them in sauce and cheese once cooked.

It is thought that the chimichanga originated in Arizona as an evolution of the burrito. They are typically less portable than a burrito since they will be hot to the touch from deep frying.

What’s The Difference Between Burritos, Enchiladas, And Chimichangas?

When it comes to the difference between burritos, enchiladas, and chimichangas, it’s interesting because in some cases the chimichanga is almost a hybrid of the two types of dishes.

Neither the burrito nor the enchilada is deep-fried, while the chimichanga is.

The chimichanga is made with a flour tortilla and stuffed with a variety of ingredients, just like a burrito. However, it can also be served topped with sauce and cheese, just like an enchilada.

Choosing a chimichanga instead of a burrito or an enchilada is a good choice if:

As you have learned, there are some distinct differences between burritos and enchiladas.

Burritos are made with flour tortillas and both ends are rolled in to contain the fillings so you can eat them with one hand. You can stuff them with beans, rice, cheese, meat, sauces, and vegetables.

Enchiladas are made from corn tortillas and the ends are left open. They are wrapped around different fillings, but then covered in enchilada sauce and queso fresco.

Once smothered in sauce, you can bake them in the oven to melt the cheese. You are going to want to use a knife and fork.

Do you have a favorite between burritos or enchiladas? Let us know in the comments!

Up Next: 3 Best Woods For Smoking Trout