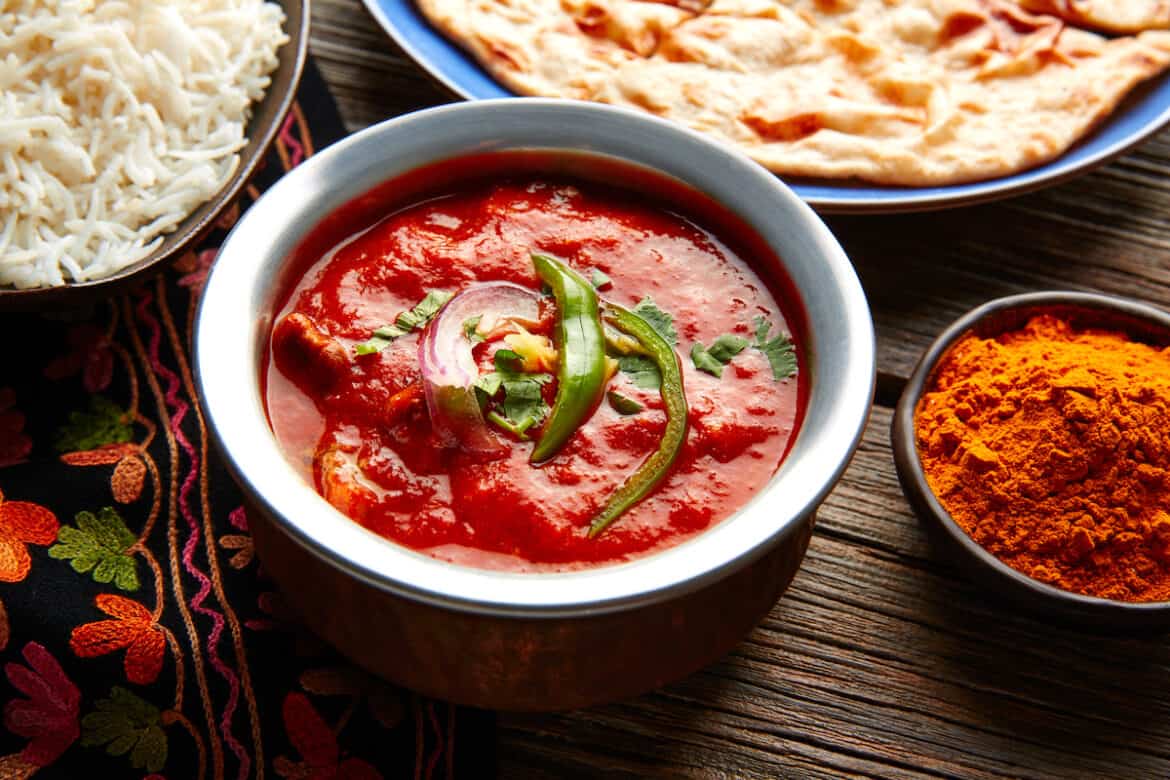 Anyone who has never made Indian food from scratch may find the idea a little overwhelming. Cuisine originating from India and Middle to South East Asia tends to use a long list of spices in their dishes.

The spices are often the same in a variety of recipes, but the ratio varies, bringing an entirely new flavor to every dish.

So what’s the difference between garam masala and tikka masala? Garam masala is a blend of spices used primarily as a finishing spice combination and as a complement to flavors in other recipes. Tikka masala, on the other hand, refers to a specific dish that will often use garam masala spices in combination with other flavors and a tomato sauce base.

In this article, we’ll look more closely at the types of spices used in garam masala vs tikka masala, and the best ways to cook with each of them.

What is Garam Masala?

In Hindi, garam means “hot” and masala means “blended spices.” It’s a blend that is very common in Indian cuisine and used to flavor everything from curries to soups and different lentil dishes.

By toasting a variety of different whole spices to release a heavenly aroma, and then grinding them into a powder, you’re left with a blend of spices that are traditionally thought to warm the body and increase your metabolism.

The ratio of ingredients will be slightly different depending on each chef’s preferences and availability of spices. If your blend comes from the northern corners of India, it will likely be milder and sweeter, growing hotter as the blend comes from further south in the country.

Garam masala usually involves blending some ratio of the following whole spices together, after being toasted:

The result is spicy, sweet, and earthy with a gorgeous aroma.

If you’re in a pinch and want the warmth of a garam masala but you don’t the blend, you can combine Allspice with cumin. Use about four times as much ground cumin as Allspice until the amount is equal to the amount of garam masala you need, or to taste.

The best brand of garam masala is going to depend slightly on personal preferences. No two brands are going to be exactly the same.

This will be even more pronounced if you’re used to traditional Indian cooking where the spices are all blended at the time of cooking, rather than sprinkled in from a jar.

The reigning favorite comes from Rani. They use 11 spices in their blend and it comes out pure magic. Salt is nowhere included in the mix, nor are any preservatives or fillers.

In addition to the traditional ingredients, they’ve added ginger and nutmeg as well as a Bay leaf. They also use both green and black cardamom for even deeper development of flavor. Your friends and family will swear your dish has been cooked by a professional Indian chef.

Biggest Drawback: If you’re used to traditional Indian cuisine or garam masala from further south, this blend might be a bit heavy on the cumin for you. It brings out the earthy quality of the flavor but also dampens the warmth and heat that more peppercorns would bring.

If you’re committed to organic spices, the Frontier Garam Masala Certified Organic Seasoning Blend is also a beautiful addition to your spice rack, but it is a bit heavy on the cinnamon and cloves, so use with a light touch.

What is Tikka Masala?

Tikka masala, though clearly an East Asian inspired creation, is one of the most popular dishes in all of the U.K. It’s so popular in England that many will argue whether it’s truly Indian cuisine or South Asian.

It may have been developed in India, Pakistan, or Bangladesh, or South Asian migrant chefs could have brought the flavors of their home country(ies) to England and actually originated a hybrid dish inside the U.K. It will likely remain forever a mystery.

Traditionally made with chicken, tikka masala is made by marinating chicken in spices and yogurt before oven baking it and then serving it in a curry sauce, often creamy and tomato-based.

It’s actually more similar to butter chicken than it is to garam masala, though it includes garam masala in the marinade.

Since many cooks don’t have the patience or know-how to create tikka masala from scratch, plenty of premade sauces have been developed to take a lot of the spice combining work out of the equation.

The spices that were originally used to marinate chicken usually include:

Once the chicken is cooked, it is simmered in a curry sauce that has more spices, including more of all of the above as well as turmeric and chili powder. Add to these spices some fresh cilantro, tomato sauce and tomato puree, and some heavy cream.

Tikka masala is most commonly made using a pre-packaged simmer sauce. You simply add your chicken or alternative ingredients to the sauce and simmer, eliminating the marinating and baking process and speeding up the meal prep time considerably.

There are many different brands and blends to choose from, and what you’re cooking inside the sauce makes a difference. Chicken tikka masala may have been the original dish, but Indian food is loved by all, including the vegetarian and vegan communities.

If you don’t want to use meat in your tikka masala, mushrooms, beans or a variety of veggies are great alternatives. It’s also important to watch for cream or milk ingredients in the sauce if you’re trying to avoid dairy.

Because of all these variations, we’ve come up with three favorite tikka masala sauces for you to choose from.

For a traditional chicken tikka masala we love the SEEDS OF CHANGE Tikka Masala Simmer Sauce. It’s organic and made with top-shelf quality ingredients, though it does have some cane sugar.

It’s extremely easy to use and serves 4 people with only 40 calories per serving. Alternatively, you can pour the sauce over a heaping pile of vegetables and have the whole package to yourself and still not ruin your diet.

If you’re vegetarian but ok with milk, the Maya Kaimal Tikka Masala Sauce is delicious.

Technically, the previous suggestion was also vegetarian, because it really just depends on what you serve it with, but we wanted to give a couple of options.

This option is much creamier and has a bit more kick in the spice department, so it works really well with a variety of vegetables that will both enhance the flavors and tame the spice as needed.

If you’re strictly vegan it will be much easier for you to find a spice blend rather than a simmer sauce.

Don’t worry though, Rani Tikka Masala Indian 7-Spice Blend is incredible when made with coconut yogurt.

As a bonus, you can use it to roast vegetables any time to get the delicate flavor of tikka masala without having to make a sauce every time.

We hope this article helped you understand the differences between garam masala and tikka masala. We also have some related questions for you to check out. We hope they’re helpful.

What is a Simmer Sauce?

Simmer sauces are any kind of sauce that you can add a combination of vegetables, meats, beans, seafood, or tofu to and then simply let simmer until it’s cooked. They’re typically one-pan meals, or can be served over rice or noodles.

You can find a wide variety of pre-packaged simmer sauces, especially in the International aisle of your grocery store. Indian and African curries are very common and mouthwateringly delicious.

What is Curry Powder?

Curry powder is a spice mix that is common in India and is used in a lot of Indian and Middle Eastern cuisines.

The biggest difference between garam masala and curry powder is the use, or lack of, turmeric.

Curry has a foundation in turmeric that provides a mild flavor and potent yellow color. Garam masala, on the other hand, has a very strong flavor profile and many cooks add it to curry to enhance the taste of a curried dish.

Curry is usually used throughout the cooking process, whereas garam masala is more of a finishing spice, added only when your dish is fully cooked and nearly ready to serve.

Up Next: Can You Freeze Curry?

Tortillas Vs Bread – What’s The Difference?