Home Foodsguy Coconut Sugar Vs Brown Sugar – What’s The Difference?
FoodsguyThis vs That 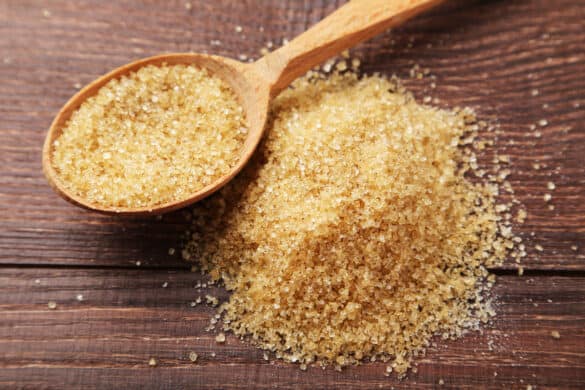 There are many more similarities and differences, from what they taste like to how they’re used. To decide which one you’ll be reaching for in your next bake-off, let’s look at each element.

What’s the Difference Between Coconut Sugar and Brown Sugar?

There may be something to the argument “sugar is sugar”, but there are still significant differences between coconut sugar and brown sugar.

They’re made from completely different plants, which we’ve already discussed. While they also similar flavors and nutritional profiles, there is still plenty to distinguish them.

How you use them in your baking provides subtle differences even though you can substitute one for the other. Before you make your decision, consider each sugar from every angle.

The biggest difference between coconut sugar and brown sugar is what they’re made of.

Coconut sugar became wildly popular because it’s lower on the Glycemic Index than conventional white sugar, so many people turn to it as a healthier solution.

The question is why? And what about brown sugar – how does that stack up?

Coconut sugar isn’t made from the meat, water, or milk of a coconut, as many people may assume. It’s actually made from the nectar of coconut palm flowers.

This makes is more similar in process to honey, though it’s a granule, not a syrup. The nectar is simply heated until all the liquid evaporates.

Coconut sugar is very lightly processed, especially in comparison to white or brown sugar. Most people know that white sugar is highly processed and unhealthy. We’re also programmed to understand that “brown” products are healthier than white alternatives.

Many common brown sugars are simply white refined sugar with molasses added back in. It’s just as processed as white sugar, and is made through the same process, with one simple extra step.

You can find unrefined brown sugar which has never had the molasses removed in the first place, and is the most natural of brown sugars.

Unless explicitly stated on the package, it’s safe to assume brown sugar has been reconstituted and is just as refined as white sugar. Molasses cuts the sweetness and adds a smoky flavor but doesn’t change the foundational ingredient: white sugar.

As just mentioned, the signature flavor in brown sugar is molasses. Depending on how dark the sugar is, you’ll get more or less flavor dampening the straight sweet flavor of white sugar.

A very dark brown sugar will take on more of the bitterness and almost coffee-like flavor of molasses, whereas a light brown will be nearly as sweet as white sugar, but with a hint of nuttiness.

Coconut sugar, interestingly enough, doesn’t taste like coconuts but is most often compared in flavor to a light brown sugar. It’s slightly nutty, a little bit caramel, and not nearly as sweet as refined white sugar.

Coconut sugar is less refined than brown sugar, which means that it retains trace amounts of vitamins, minerals, antioxidants, amino acids, and other healthy plant-based materials.

Brown sugar does not have these trace amounts of vitamins, minerals, or other healthy materials. It’s as healthy as you would expect sugar to be.

Regardless, if you look at their basic nutritional profile, they are almost exactly the same. Trace amounts of minerals only show up in huge portion sizes, which you don’t want to consume in any type of sugar.

Where the biggest nutritional difference occurs is in the glycemic index (GI), and this is primarily why coconut sugar has become so popular in recent years.

This means that consuming the same amount of sugar will trigger a much-reduced response from your metabolic system (if you eat coconut sugar), helping you keep your blood sugar balanced more effectively.

Brown sugar has plenty of moisture in it and it dissolves quickly in liquid. Brown sugar also tends toward the sticky side of sugar granules because of the added molasses.

There’s a popular trick of placing a piece of bread in with your brown sugar to pull moisture from the sugar to keep it from clumping together.

Coconut sugar tends to be larger individual granules, which will affect the way it dissolves, especially if you’re discussing use in baking. If you need to cream your sugar with butter, it’s a good idea to put your sugar into a blender to grind it into smaller pieces first.

Coconut sugar has less moisture in it than brown sugar, so if you’re baking with it you may need to add a bit more liquid to your recipe to keep the overall consistency of your baked good the same, regardless of how well it dissolves.

Coconut sugar is more variable than brown sugar depending on the brands you buy, so it’s hard to predict exactly how well they’ll dissolve. If you’re using it in coffee or a warm beverage, just give it a good stir and you’ll have no problem.

If you’re dissolving coconut sugar in thicker liquids like full-fat milk or oils, you may want to give it an extra 5 minutes to dissolve fully.

How to Use Brown Sugar Vs Coconut Sugar

Coconut sugar is less predictable in recipes and is not as commonly used by professional bakers and recipe developers. So every time you substitute coconut sugar for another kind of sugar, you’re taking a texture and consistency risk.

It might pay off, but you also might end up with baked goods that are denser and/or drier.

With that in mind, coconut sugar is a great solution for your daily coffee or tea, for sweetening cereals or for sprinkling on top of anything you’d like to sweeten.

If you’d like a reliable sugar for baked goods, brown sugar is going to offer more consistency. Brown sugar is also more budget-friendly and significantly easier to find in local supermarkets.

Can You Substitute Coconut Sugar for Brown Sugar?

Yes, in general, you can substitute coconut sugar for brown sugar and vice versa, cup for cup. However, coconut sugar is less sweet and less naturally moist.

To compensate, if you’re swapping coconut sugar for brown sugar, you might want to consider adding a bit more liquid. A dollop of natural applesauce will also give you the moisture you need and add another boost of natural sweetness.

Where to Buy Brown Sugar vs Coconut Sugar

Brown sugar is readily available in just about any grocery store, though if you’re searching for unrefined brown sugar, the search might be a bit harder.

For the highest quality sugar, whether coconut or brown sugar, Amazon is our favorite shopping center. You can find a huge selection of options and decide whether to shop on price, quality, or something in between.

We hope you’ve learned a little something about coconut sugar and brown sugar. We’ve also included some related questions for you which we hope you’ll check out.

From this point it’s either boiled to create a paste or the water is completely evaporated to create small rock-like chunks of sugar called jaggery.

Palm sugar isn’t as sweet as brown sugar, though they have similar flavor profiles. Palm sugar is on the smoky end of the scale whereas brown sugar has more of the cooked caramel, molasses flavor.

No, coconut sugar doesn’t taste at all like coconut. It’s most commonly compared to a light brown sugar, in fact, though not as sweet. It has a slight caramel edge to it that many compare to molasses.

What is a Healthy Substitute For Brown Sugar?

Sugar is sugar and there no truly healthy substitutions. Substituting brown sugar with coconut sugar will reduce the glycemic index, which is better for your metabolic system.

Substituting with artificial sweeteners can completely eliminate the sugar content. It depends on what you’re using as a measurement for health.

Up Next: Vanilla Essence Vs Vanilla Extract – The Differences

How Long Do Cooked Lentils Last?