7 Fruits That Start With E 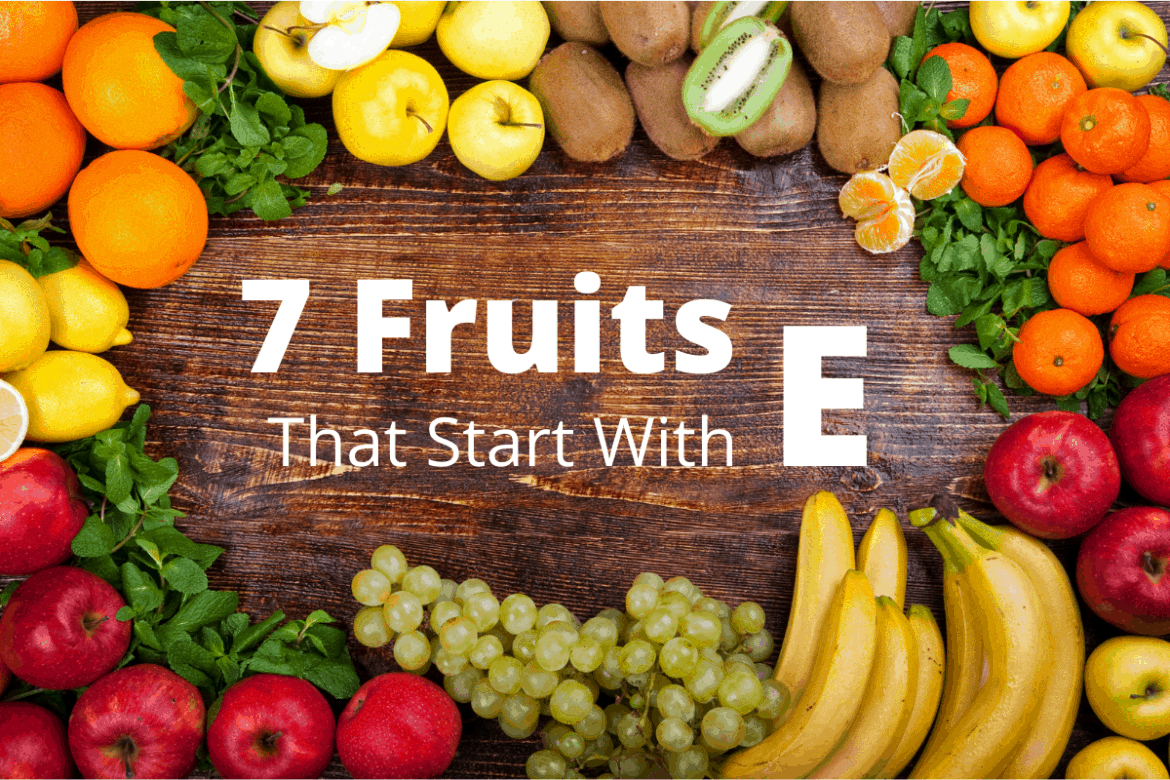 It can be a fun challenge to learn about or even try all the fruits starting with the letters of the alphabet, but some letters are definitely more challenging than others.

In this article, we share the sweet details about 7 fruits that start with E.

7 Fruits That Start With The Letter E

Eggfruits are round, with glossy yellow skin surrounding soft yellow flesh when ripe. The eggfruit gets its name because the color, texture, and taste strike a remarkable resemblance to a hard-boiled egg yolk.

They are a great fruit to eat raw and fresh from the tree when they have the flavor and feel of slightly tropical egg custard.

One of the most popular ways to consume eggfruit is by making egg fruit nog by removing the skin and seeds of the egg fruit and blending it with almond milk, vanilla, dates and nutmeg.

Coming from elder trees, elderberries are a little, deep purple berry, with translucent juicy pulp. These berries are made up of over 80% water. Often described as “bright”, elderberries have a tart, earthy flavor and are commonly eaten as a fresh-picked snack.

Elderberries can also be cooked for jams, pies, and other desserts. They’re gaining popularity as a superfood because they’re thought to lessen the effects of the common cold and flu. These purple berries are also used as food-grade coloring agents for food and even clothing dyes.

Elephant apples are large, apple-like fruits that appears to be covered in thick green petals. The insides of elephant apples consist of a mealy, jelly-like pulp that is an off-white color.

Elephant apples get their name not because they look like apples, but because they are a staple in the diets of Indian elephants. Monkeys and birds also seem to enjoy these fruits.

Humans can eat elephant apples as well, but they have a strong unappealing odor and a bitter-sour, astringent taste. When these fruits are used for human consumption, they’re most often used to flavor sour soups and curries.

Also known as Indian Gooseberries, emblicas are small round fruits that are a little bigger than common green grapes. These little balls of fruit have almost translucent bright green skin and pulp. Inside are clearly defined sections and a single seed.

Emblica fruits can taste be quite sour in the first bite but will have astringent, bitter, and sweet undertones and after-taste. Emblica fruit is most commonly used for medicines to fight colds and other illnesses, but they can also be eaten fresh and raw if you enjoy the sourness. Emblica is also served as a candy after being soaked in syrup for a number of weeks.

Emu berries are also known by other unflattering names like Diddle Diddle and Dysentery Bush just to name a couple, though the scientific name, Podocarpus drouynianus, is most commonly used.

Emu berries grow on Australian bushes as small red berries that have a texture more like plums. Emu berries don’t have much of a flavor, just a hint of sweetness. They are edible but their production rates are unstable so the bushes are mostly just used as decoration in home gardens.

The entire plant is useful for different medicinal purposes

Entawak is a rare 3-4 inch fruit found almost exclusively in Borneo, Sumatra, and Malaysia. The fruits have a yellowish-brown spiky shell. Beyond the spiked armour, you will find individual balls of orange juicy pulp that surround the seeds, which are both edible.

The flesh of entawak fruit is eaten fresh and raw and has a powerful sweet pumpkin-like flavor. The seeds can be eaten raw as well but are best enjoyed baked with favored seasoning as enjoyed as a healthy snack or garnish.

Etrog has a long history as a “beautiful fruit.” Etrog is the Hebrew word for citron and, in Jewish religious ceremonies, much care is taken to select the most perfect and beautiful of these fruits. After the fruits are used in religious rituals, they are often made into marmalade, juice, candied, and added as a garnish to meals and desserts

Etrog, or citrons, look like large lumpy, bumpy lemons. The rind is waxy and thick and has an intense citrus smell when touched. The fruits are mostly rind and white pith with minimal flesh that is normally abundant in citrus fruits.

Etrogs are also used in skincare and for medicinal purposes such as morning sickness and cold and flu.

Now that you’ve learned all about fruits that start with E, if you’d like to discover more varied foods that start with the same letter, you can check out our post, 43 Foods That Start With E.

Up Next: Fruits That Start With D