Home Foodsguy French Skillet Vs Frying Pan – What’s The Difference?
FoodsguyThis vs That 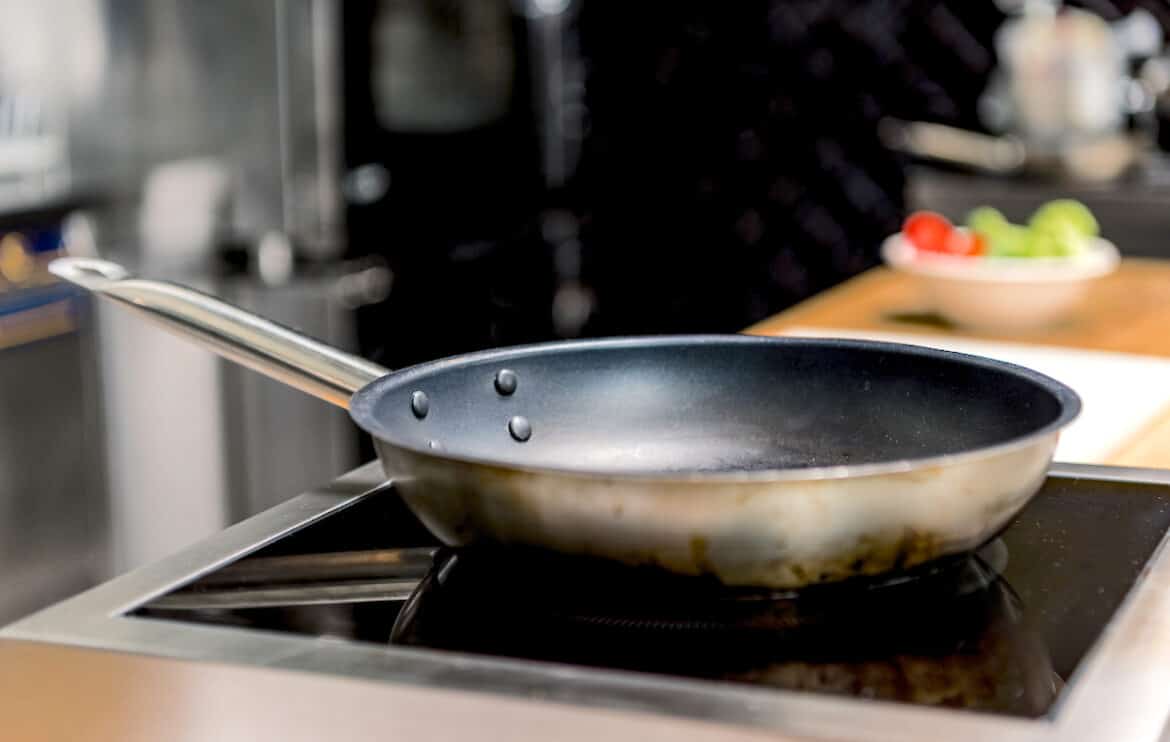 Pans are hands-down one of the most important cooking vessels in the kitchen, but with so many on the market, how are you supposed to know what each is for and which is best? All the sizes, shapes, coatings, names – it’s all too much!

But don’t fear because we are here to help clear things up. A recent rise in popularity has French skillets in kitchens all across America, but like many of us, you may never have even heard of it. A pan is a pan, right?

In this article, we will take an in-depth look at frying pans and French skillets. This will help you understand what the differences are in both design and use.

What Is The Difference Between A French Skillet And A Frying Pan?

Before comparing the differences, it will help you to first look at what each of these pans are and what they do.

They come in various sizes averaging around 12-inches, although they can range anywhere between 6–16 inches.

The size, to a certain extent, determines the function. For example, you will probably fry one egg in a 6-inch pan, whereas you will use a larger pan if you want to fry more eggs at once.

Frying pans are designed with flat bottoms so the heat can be distributed evenly and effectively. The low sides are also a defining characteristic that functions like a barrier to keep liquid from spilling over.

These sides aren’t high (only an inch or two), as the function of the pan is meant to fry foods, not simmer.

These pans usually have one long handle so the user can easily maneuver the pan on and off of the heat, but some larger frying pans may also have a second smaller grab handle, only meant to help carry the weight.

Frying pans do not have lids – if you have a pan with a lid, it immediately becomes another type of pan like a sauté pan or non-stick universal pan.

Moving on to the type of materials used to make frying pans, we are looking mainly at stainless steel, though they can also be made of aluminum or ceramic.

Stainless steel is a great anti-corrosion material that is great at distributing heat and able to handle a lot of it. It is very durable and the best long-lasting option.

However, with the rise in non-stick, PTFE-coated products, eventually, frying pans started changing. You can very easily find and buy stainless steel frying pans that have a non-stick coating inside.

Ceramic pans are popular too, however, for their chemical-free non-stick surfaces, but they don’t tend to last as long and can crack or chip.

As the name suggests, frying pans are meant to do just that: fry. You can fry anything without the excessive amount of oil needed for cooking methods such as deep-frying.

You can fry virtually anything you can think of: crumbed mushrooms, meat cuts, vegetables, caramelize foods, and much more. Because the frying pan is so diverse, it can be used as a substitute for other cooking vessels.

Frying pans should also not be confused with cast iron skillets, so we have an entire article that dives into skillets vs. frying pans and what makes them different.

A French skillet is very similar to a frying pan, but with a few minor differences. These differences, however small, do make a big difference in the kitchen.

French skillets also come in various sizes, but the range is much smaller. They usually range from 8-12 inches.

They have been designed with a flat bottom to allow excellent and effective heat conduction. The flat bottom also allows for a bigger surface area so more food can cook at the same time.

The sides of a French skillet are much higher than that of a normal frying pan. The pan has been designed with sides 2-3 inches steep (depending on the size of the pan).

They are almost always very straight, but you can also get French skillets with slightly sloped or rounded sides.

This design allows the pan to hold much more food and liquid. The ones that do still have slightly sloped sides will allow you to toss and flip foods.

A French skillet also has a long handle on one side and sometimes a grab handle on the other. This functions in the same way a frying pan’s does, allowing you to control and move the pan with ease.

Even though “skillet” is in the name, these vessels are rarely made from cast iron. They are actually made with stainless steel, just like frying pans are.

As with frying pans, French skillets can also have non-stick coatings, but because of their straight sides, it is less likely.

These cooking vessels are used in very similar ways to frying pans; the biggest difference is that they can hold much more liquid.

Below is a side by side comparison that will clearly highlight the differences and similarities between these two pans.

The main difference between these two cooking vessels is their sides. Frying pans have sloping sides that are low to help you flip and toss foods. This also means, however, that they can’t hold as much food or liquids.

This is where the French skillet comes in, as it has much higher sides that are most often straight. This allows you to still fry more food, but it’s much more difficult to flip and toss the food.

The other biggest difference between the two is that frying pans come in a much wider variety of sizes. This means you can easily customize the pan to the food you are making.

When using skillets, there aren’t that many size options. However, the French skillet’s main function is to make larger amounts of food, so this isn’t necessarily a problem for those who tend to make large meals anyway.

The last mention-worthy difference is the materials they are made from. Yes, both these pans are usually made from stainless steel, however, it’s the non-stick coating that is the difference.

This means that whenever you are making something that cannot stick, for example, crepes, you will have a much more difficult time on the normal stainless steel French skillet surface.

French Skillets and Frying Pans – Are They Interchangeable?

The short answer is yes, but that depends on what you want to cook.

For many food items, you can easily substitute the frying pan and French skillet with one another. This includes, for example, frying eggs, sautéing vegetables, searing meat, thickening sauces, and much more.

The problem comes in when the pan you use fulfills a specific function.

For example, if you are making crepes, a stainless steel French skillet won’t be able to make them as well as a frying pan because they will stick to the flat, uncoated bottom and you will be unable to flip them as easily.

Functions that the French skillet is superior in are frying large amounts of food or simmering sauces and stews.

If you try to make something like this in a frying pan, your food would constantly fall out of the pan and it will also not be able to hold excess moisture. Risotto and paella are great examples of dishes best made in a French skillet.

So again, yes, for certain functions these two pans are easily interchangeable, but for other more specialized functions, they aren’t.

Is a French Skillet a Sauté Pan?

There is a lot of confusion when it comes to comparing sauté pans, frying pans, and even French skillets. A French skillet is often referred to as a combination of a sauté pan and frying pan.

A sauté pan always has very straight sides and they come with a lid.

A French skillet, as we have just discussed, often has slightly sloping sides, but the biggest difference is the lid. Sauté pans are often much larger and have much higher sides than even a French skillet.

This, along with the lid, helps trap moisture to keep the food from burning and allow any vegetables to steam properly.

Up Next: Are Copper Pans Oven Safe?