Home Foodsguy Flapjacks Vs Pancakes – What’s The Difference?
FoodsguyThis vs That 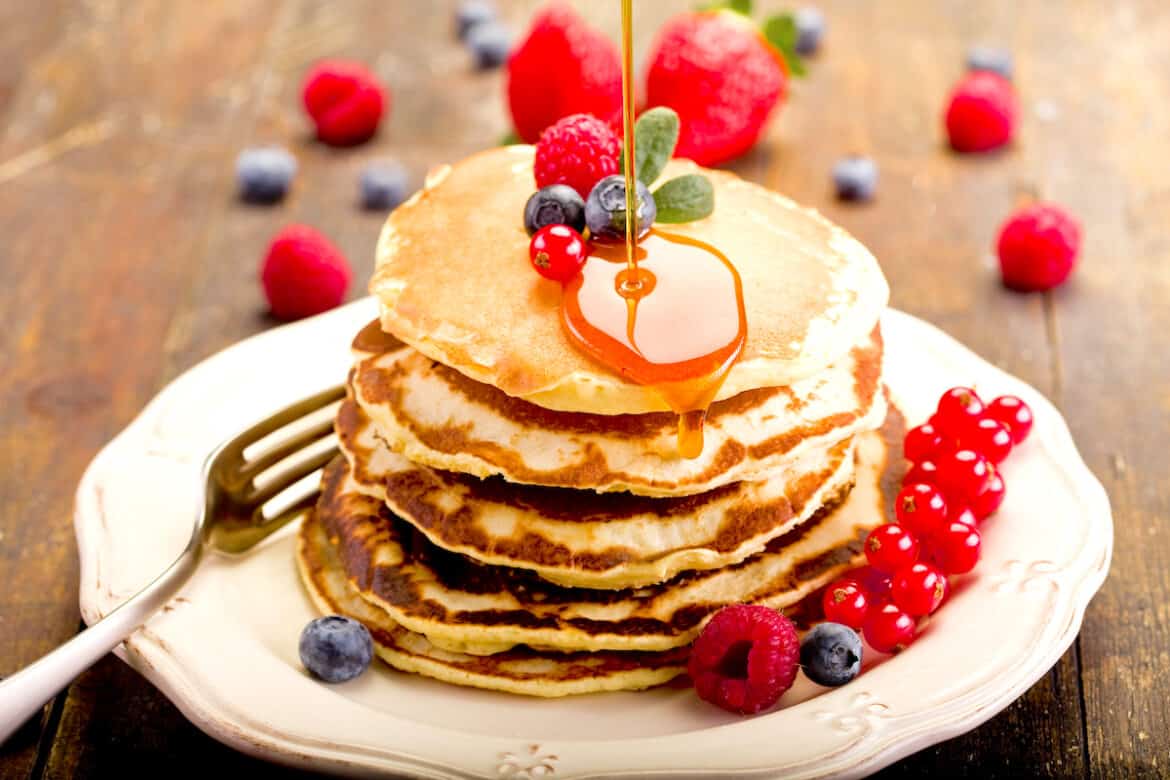 Flapjacks and pancakes – both delicious, and both commonly mistaken for each other. The confusion comes from the two words having different meanings in the US and the UK.

In the US and Canada, flapjacks and pancakes refer to the same food, while the two are totally different in the UK.

This is understandably confusing, and many of us are left wondering:

There is more to it than just this, and to understand the difference between the two, we will need to dive into what they are made from, how they are prepared, and how they are served.

Flapjacks And Pancakes In The United States

As mentioned above, flapjacks and pancakes are used interchangeably in the US. Both refer to the thin, round cakes made from batter which is fried in a pan or griddle on both sides.

The main ingredients in flapjacks or pancakes are milk, flour, and sugar. Often a leavening agent such as baking powder is used to make a fluffier, taller pancake.

Pancakes and flapjacks are usually laid out flat or stacked on top of each other and have syrup or other flavoring agents drizzled on top.

Flapjacks and pancakes are most commonly served for breakfast or dessert, and are mostly served sweet with maple syrup, honey, sugar, cream, caramel or chocolate syrup, jam, or fruit.

Often, ingredients are added into the batter itself, such as berries, bananas, apples, nuts, or chocolate chips.

In some parts, flapjacks and pancakes are also referred to as hotcakes and griddlecakes, so it can get quite confusing if you don’t know all the different terms.

But don’t confuse any of these terms with waffles, as they are not the same thing! In fact, we dedicated an entire article to explain the difference between waffles and pancakes.

Flapjacks And Pancakes In The United Kingdom

When in the UK, pancakes are the same thing that pancakes in the US are, thin cakes made from batter.

However, in the UK, pancakes are thinner and have a bit of a crisp edge.

They resemble crepes more than American pancakes but are thicker, less sweet, and made with slightly different ingredients than crepes.

While pancakes in the US are laid out flat or in a stack, in the UK, they are served differently.

British pancakes are covered with a filling and then rolled up. The filling can range from sweet ingredients like syrup, honey, jam, and fruit, to savory fillings such as cheese, beef, chicken, or even eggs.

Next up are British flapjacks, which are completely different from what flapjacks are in the US.

Once again, in the US, flapjacks and pancakes are the same things, but the same cannot be said for the UK.

Flapjacks in the UK are oat slices or tray bakes that are cut into bars. They are very similar to granola bars or muesli bars, with the main ingredients being rolled oats, butter, and brown sugar.

There are a variety of fillings that can be added, such as dried fruit, nuts, coconut, or chocolate.

In the UK, flapjacks are served with tea or as dessert, or even as a quick breakfast on the go. They are quite easy to make and you can use some extra ingredients in your pantry to bulk them up. Once cooked, they last for quite some time as well.

If you are looking outside of the US and are considering the difference between flapjacks and pancakes, then we’ll dive deeper into the actual ingredients that separate these two delicious breakfast treats.

The main ingredients in pancakes include flour, eggs, milk, butter, and sometimes a leavening agent. Of course, ingredients can always be substituted or left out, like we’ve done in our recipe for pancakes without butter.

Some sugar can be added to give the pancakes a sweeter taste, and some salt can be sprinkled in too, just to bring out the sweet flavors a little more.

Some also choose to add in vanilla essence, which is most commonly done when making pancakes for sweet toppings, and not so much when the pancakes are being made to be topped with savory food.

In place of the butter, you could also use oil. Milk can also be substituted with buttermilk, which gives them a lighter texture and tangier taste.

If you are feeling adventurous, you could also add in chocolate chips or fruit to the pancake mix for an extra sweet kick. You could choose between milk, dark or white chocolate, or a combination of a few.

Flapjacks, the type from the UK, are oat bars that are baked in the oven. The most common ingredient in this would be the oats. Along with the oats, flapjacks include butter, sugar, and golden syrup.

Brown sugar or demerara sugar are most popular to use, as they give the flapjacks a richer flavor. To give the flapjacks more flavor, or to make them healthier to enjoy as a breakfast treat, you could include some of the following ingredients:

You could also find healthy flapjack recipes that use apples and bananas to bind the mixture together, which cuts out the processed sugar.

Once the flapjacks have been baked, they are sliced and left to cool.

As a treat, you could top the flapjacks with a sauce or topping as well. One of the most popular toppings for flapjacks is chocolate icing, made with icing sugar, cocoa, and some hot water.

This is drizzled onto the top of the flapjack to form a hard icing layer. You can get quite creative with toppings!

To put things simply, here is a quick chart summarizing all the differences between pancakes and flapjacks.

How Do You Make Perfect American Pancakes?

Pancakes can be tricky to make. The batter has to be the perfect consistency to spread and you need to know when to flip the pancakes.

To prepare a pan for cooking pancakes, heat it on medium-high heat on the stove. Add a small drop of butter in and see if it sizzles. If the butter sizzles, lower the heat and add in the batter for the first pancake.

You will need to see how it cooks before carrying on. If the edges of the pancake start to cook and brown, and bubbles form, then the pancake should be ready to flip and the bottom should be a golden brown.

Here are some extra tips for perfect pancakes:

Buttermilk is important because it contains an acid that helps to kick start the baking soda, to give the pancake more height.

The buttermilk also works to break down strands of gluten, which give the pancake a finer and more buttery consistency. Buttermilk is the secret to fluffy, light, and soft pancakes!

How Do You Make Perfect British Flapjacks?

Cooking flapjacks (the UK type) is fairly easy, and you can’t really mess them up if you are following a recipe.

However, to help out, here are some tips to use to make the perfect flapjacks:

What Is A Johnnycake?

Another addition to the confusion between pancakes and flapjacks are Johnny cakes.

Johnnycakes are very similar to pancakes, but are made using cornmeal instead of flour, and are most commonly found in the United States, predominantly along the Atlantic Coast.

Johnnycakes can be served either sweet or savory, topped with different ingredients, depending on what you are having them for – breakfast, lunch, snack, or dessert!

Johnnycakes are slightly denser and have a different flavor than pancakes, but are still super delicious and easy to prepare.

Along with flapjacks and pancakes, you have probably heard of crumpets too!

Crumpets are quite closely related to English Muffins and are considered to be very much the same thing in the US, but these are nothing like muffins.

This might all seem quite confusing, but simply, crumpets are griddle cakes, which are made with flour, water, milk, and yeast, or another leavening agent.

They are smaller in size, but much thicker than pancakes. Crumpets are served hot with butter, syrup, honey, or jam drizzled on the top.

Like flapjacks and pancakes, crumpets can be enjoyed for breakfast, tea, or dessert. They traditionally come from the UK but are a fairly common food item around the world.

You can also find crumpets readymade and packaged to be sold in stores, which can be popped into the toaster, oven, or microwave to be warmed up and enjoyed.