Can You Freeze Tamales? 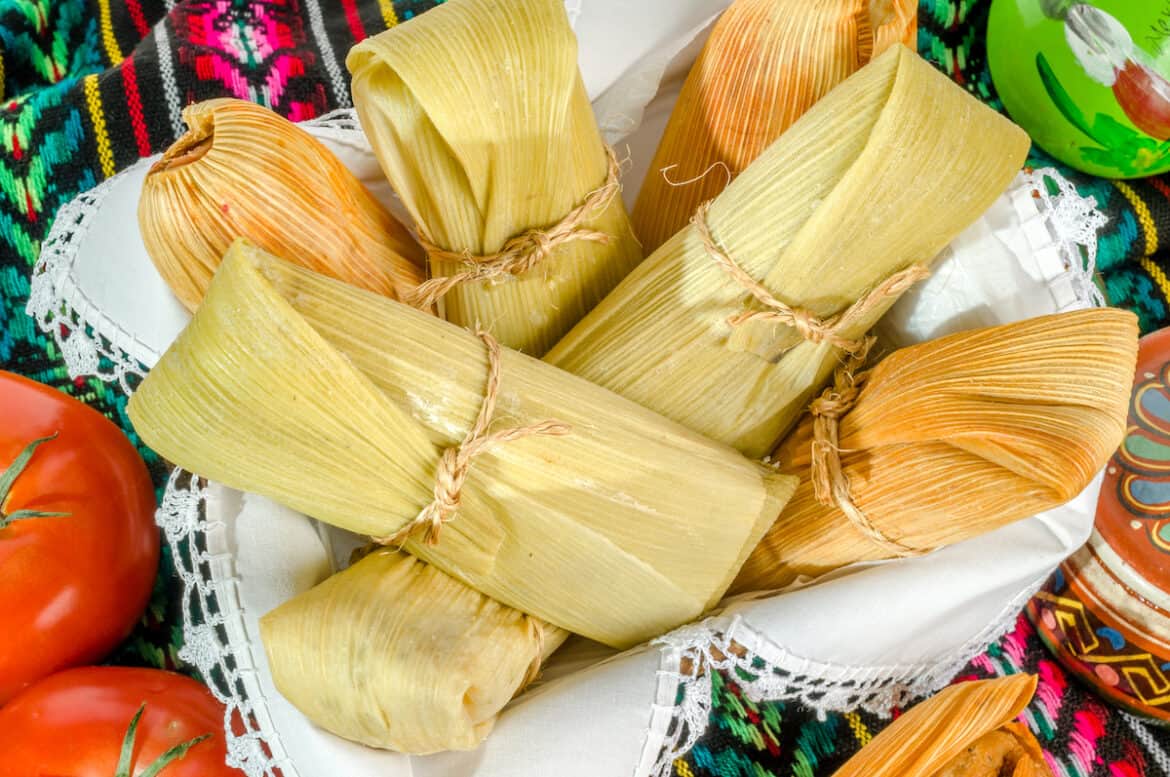 Tamales are a staple in Mexican cuisine. They are a starchy, doughy, savory corn-based dish which is steamed either in a corn husk or banana leaf. Tamales can be filled with cheese, meat, fruit, vegetables, and sometimes even chilies.

Preparing tamales is an event of its own, with tamale-making being a huge part of Mexican culture. It can take hours to make tamales, so if you are wanting to make them at home, it would be worth your while to make a few batches in one go.

To keep the extra batches, can you freeze tamales? Yes, you can freeze tamales, and they keep considerably well in the freezer. As long as tamales are prepared and packed properly, they can stay fresh for 3-6 months in the freezer with little change to their flavor or texture.

You will be able to save yourself so much time when you learn how to freeze tamales properly, allowing you to spend time making one large batch that you can freeze and enjoy over a few months.

We’ll walk you through freezing both cooked and uncooked tamales, as well as best thawing and reheating practices, so you can always have some delicious tamales on hand.

When freezing tamales, they are most commonly frozen once cooked.

It is a perfect make-ahead meal, and once you have prepared the tamales, you can cook them all together in one go. This saves you from having to cook the tamales from raw when you remove them from the freezer.

However, when the tamales are cooked, you have to ensure that you pack them properly and carefully for freezing, as the original corn husk wrapping is too flimsy to withstand against the intense cold in the freezer.

It is better to freeze cooked tamales, as uncooked fillings could change flavor and texture when frozen, so freezing tamales after they have been cooked does save more of the flavor, texture, and quality.

How To Freeze Tamales

Before freezing, you would just make an extra batch or two of tamales along with the ones you are going to enjoy that day. You would go ahead and make them exactly the same you would as if you were going to eat them straight after cooking.

Once you have cooked the tamales, you then need to separate the ones you will be eating straight away, and the ones which you are wanting to freeze.

Follow this process to freeze tamales to enjoy another day:

Leave to cool – You need to let the tamales cool completely to room temperature before getting them ready to be frozen. Leave the tamales on a cooling rack for about an hour.

Check them frequently to see if they have cooled completely. However, you cannot leave the tamales out for too long as they could spoil after an extended period of time.

Pack them – Once the tamales have cooled down to room temperature, you can pack them into their storage containers for freezing. You can place the tamales in a large, airtight container. This does limit you to the number of tamales you can fit in a container, and the containers do take up quite a bit of space in the freezer.

Alternatively, you could wrap each tamale up in a plastic wrap, and then place these all in a heavy-duty plastic freezer bag. This allows you to remove as many tamales as you want, without having to defrost the whole lot.

Label – Seal the container tightly, whether it be a plastic freezer container or freezer bag, and label it with the name of the contents, and the date of freezing. This helps determine when the tamales should be eaten by for the best quality.

The soft dough, masa, which is used to make tamales, is highly perishable.

Most people choose not to freeze tamales uncooked because there is a higher chance that the masa and other ingredients will not hold up well against the freezing process. Then they might not have the same great taste and texture after freezing and thawing.

Although with the right technique and preparation, you can make the tamales ahead of time and store them uncooked in the freezer to cook at a later stage.

To do this, you will just make the filling as you usually would, and then either pack the tamale filling in the corn husk wrapping, or just pack the whole batch unwrapped, and place it in the freezer.

There is no better option for this, it is just up to personal preference. Whether you pack the filling on its own or wrapped in the corn husk wrapping, you need to place it in a freezer-safe container.

Without a freezer-safe container, the tamale could be damaged by ice crystals and frost, which could alter its consistency and taste for good, and the tamales just won’t taste the same when thawed and cooked.

When it comes time to cook frozen uncooked tamales, you have two options. You could leave the tamales to thaw in the fridge overnight, which is the safest way to let them thaw, and then place them in the steamer to cook.

Alternatively, you can place the frozen tamales straight in the steamer to cook from frozen. Wrapped tamales are great to cook straight from frozen, especially using a steamer.

If you had frozen the filling separately, you will need to leave the dough and filling in the fridge to thaw overnight, before wrapping them in the corn husk wrapping and then steaming the tamales.

The defrosted tamales can be steamed for 25 minutes over medium heat, but this will depend on the size of tamales and the amount you are wanting to cook.

How Long Can Tamales Be Frozen For?

If placed in an airtight container, or wrapped tightly in plastic wrap and placed in a freezer bag, tamales can be kept in the freezer for up to six months.

While they will still be fine to eat after this, the quality and taste of the tamales will begin to decline and they just will not taste as good as they should.

Labeling the container with the date of freezing is so important to ensure that you do get to eat the tamales before they being to lose quality.

How Do Various Fillings Affect Freezing?

While most tamales freeze well, you should be wary of the fillings you are using when it comes to freezing. Most fillings, such as meat and shrimp, freeze really well and taste almost the same when thawed and reheated.

However, for vegetable fillings, it is important to note that vegetables do tend to be more watery and mushy after being frozen and thawed.

Due to this, it is recommended you do not overcook a vegetable filling before freezing. You may even leave the vegetable filling uncooked so that it reaches the right texture and consistency when it is thawed and reheated, and it isn’t too soft and mushy.

Dairy fillings, such as cheese fillings, can often be tricky as well. Dairy, depending on what it is, can sometimes separate during freezing or thawing, or like cheese, it can become crumbly.

If you are freezing a cheese filling, just make sure that there is a good balance of ingredients to prevent the cheese filling from weeping or becoming dry and crumbly after freezing.

For cheese fillings, it is best to freeze the tamales for up to three months, instead of waiting the full six months.

There you have it: a guide to freezing tamales of all types so that you can save and enjoy them another time.

We have also included these related questions in case you have even more tamale-freezing questions.

Can You Freeze Tamales in Foil?

How Do You Thaw Frozen Tamales?

If you are not reheating the tamales from frozen, it is best to leave them to thaw overnight in the fridge. This is the safest way to thaw the tamales and ensures they are not left at temperatures which could cause increased bacterial growth.

If you don’t want to wait overnight, a few hours in the fridge should thaw the tamales enough for you to then warm them up.

Do I Need to Thaw Tamales Before Freezing?

You don’t necessarily need to thaw tamales before reheating them, however, you should let them thaw for around 30 minutes before placing them on the stove, steamer, or microwave to heat up.

You can technically steam tamales from frozen, but giving them half an hour to thaw does make a difference with the reheating time, and the quality of the tamales once reheated.

It is completely safe and possible to freeze tamales to enjoy later on, and most people do make a larger batch of tamales to freeze some to enjoy another time.

Having some frozen in the freezer really does save you time, and allows you to have the wholesome meal without having to put in hours of preparation!

Up Next: Can You Freeze Tomatillos?

Can You Freeze Quiche? – The Complete Guide

Can You Put Hot Coffee In The Fridge?