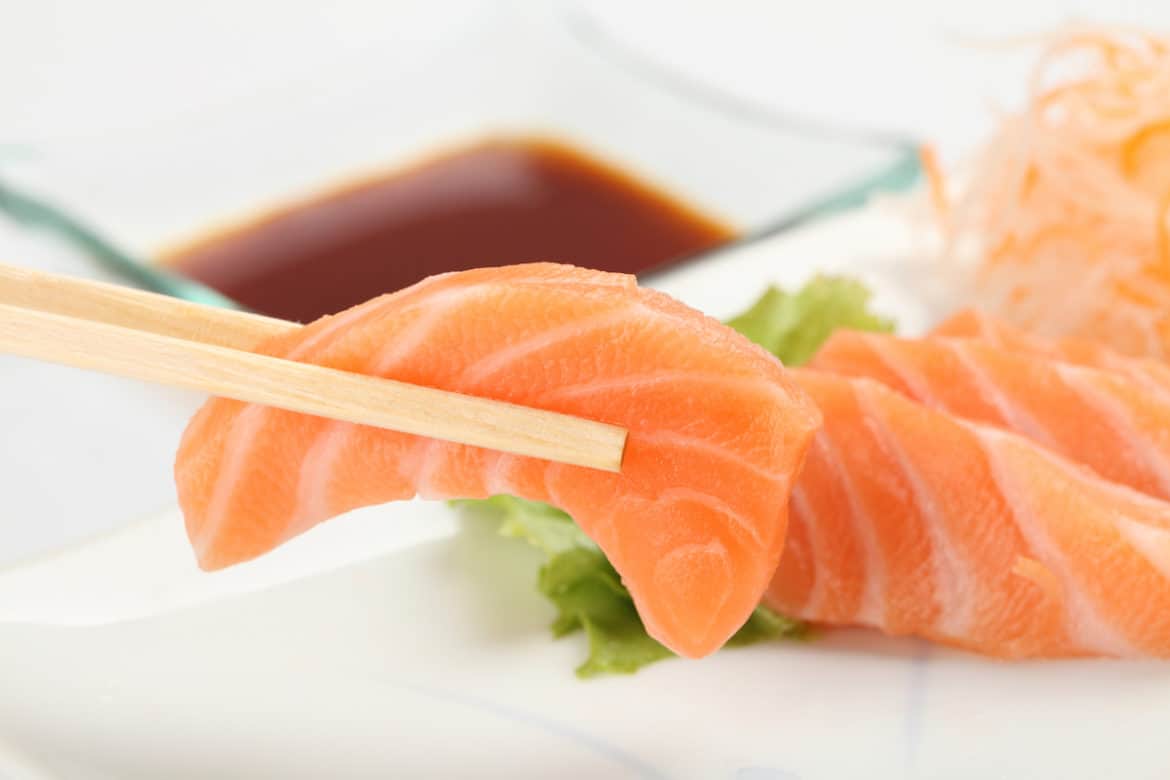 If you haven’t jumped on the raw fish food train yet, it’s definitely time to give this Japanese inspired culinary delicacy a try. It might sound fishy, pardon the pun, to eat any type of meat raw, but when it’s prepared properly, sashimi is not only safe, but also delicious and full of great nutrition as well.

So can you freeze sashimi? Yes, you can and often should freeze fish before consuming it to eat raw but no, you shouldn’t freeze prepared sashimi—as in leftovers or take away—at home in your freezer to eat later.

If you’re going to eat sashimi, it a good idea to really understand sashimi, so let’s take a closer look.

Sashimi is often confused with sushi because it’s most commonly served in sushi restaurants, but there are a few pretty important distinctions.

Sashimi is simply raw meat that is very thinly sliced. It’s usually fish, but it can also be any type of meat.

Sushi, on the other hand, might include raw fish, but it’s more distinguishing feature is the vinegared rice used to wrap up other ingredients, which often includes fish – raw or otherwise – and thinly sliced vegetables and seaweed.

If you are thinking of making Sushi at home, I recently got this book from Amazon and am obsessed with it!

In both cases, preparation is key. You never want to be eating raw meat that either isn’t prepared by a professional, from start to finish or that you are personally skilled and informed enough to know is safe from potentially harmful bacteria.

There is raw fish and then there is “sashimi grade” meat.

Sashimi-grade essentially means that the quality of the meat you’re getting is high enough that it is safe to be eaten raw. It has gone through all the precautionary measures required to kill and remove any bacteria or organisms that might have been living in the meat.

If you eat at a popular restaurant, you can be confident that what you’re getting is sashimi grade. You can also find sashimi-grade fish as some supermarkets or specialty shops.

This brings us back to those two schools of thought. Many people are under the impression that the fresher the fish, the safer it is to eat. While it’s true that fresh fish has had less time to have bacteria grow, it also hasn’t taken into consideration any parasites (like worms) that are already inside the fish.

Those who believe that fish must be frozen in order to be safe to consume raw are more commonly correct. For most freshwater fish, the safest way to eat raw fish is if it has been previously frozen to FDA standards: at least 15 hours frozen at a temperature of -31F or a minimum of 7 days at a temperature of -4F.

Even though you’ll hear the term “sashimi grade” thrown around frequently, there are no absolute regulations and the quality of your meat is entirely dependant on the supplier. If you’re going to eat sashimi, it’s a good idea to make sure the restaurant you’re visiting has a long-standing reputation, as that is going to be the best reflection of their standards.

Some shellfish and tuna are particularly resilient to parasites, and carefully farmed fish that have been protected against parasites, don’t necessarily need to be frozen before being served raw.

What if you or your significant other is a fisher and regularly bring home a fresh catch? As a general rule, for safety sake, unless you’re eating at the table of a master chef, it’s simply easier to make sure your fish has been frozen in a commercial freezer before eating is raw.

If you don’t happen to have a commercial freezer in your home, there are a few important things you should know about how to freeze fish for eating sashimi prepared at home.

Whenever you freeze food, ice crystals form inside the item which breaks down the protein structure on a cellular scale. The quicker you can freeze something, the smaller the ice crystals will be and the better the quality of your food will be when you thaw it. Commercial freezers have very low temperatures and therefore freeze foods very quickly, retaining as much of the integrity of the food as possible.

A typical home freezer is set to 0F which is not cold enough to ever meet safety standards for freezing fish. There is too much risk that parasites won’t be killed properly, not to mention the quality of your protein is going to be significantly damaged.

If you can decrease the temperature of your freezer to at least -4F, then you can freeze your fish for a minimum of 7 days before consuming it as sashimi.

How To Freeze Fish for Eating Sashimi

Can You Freeze Sashimi Leftovers?

If you’re planning on going out for a lovely sushi dinner with thoughts of ordering plenty of sashimi in order to take away leftovers so that you can eat them at home at a later date, unfortunately, this is not a great plan.

As mentioned, sashimi quality fish has most likely already been frozen once. Freezing it again is going to severely damage the quality of the fish, especially in your home freezer. When you take it out to enjoy it, you’ll be disappointed to find that what you have now is mushy, fishy meat.

If you’ve found frozen sashimi quality meat at your supermarket or specialty store and you can get it home without risking it thawing in the slightest, then you can keep it frozen in order to eat as sashimi at a later date. If there is any chance that it will thaw before you get it home and into your freezer, it’s better not to even try.

If you’ve got a cooler in your car filled with ice or ice packs, you should be ok. As soon as the meat starts to warm up though, bigger ice crystals will form when it refreezes and the quality will turn to mush.

How To Store Prepared Sashimi

Just because you can’t freeze your sushi or sashimi leftovers doesn’t mean you shouldn’t take them with you when you leave the restaurant. You can store prepared sashimi for about a day, so as long as you’re happy eating the same food two days in a row, then wrap it up and bring it home!

Bacteria will grow pretty quickly on raw fish, so you want to be sure that you’re getting it in a refrigerator as quickly as possible.

Pack your sashimi tightly and wrap it in plastic wrap to protect it from exposure to air and bacteria. It’s not a bad idea to then put the wrapped sashimi into an airtight container as well.

If you’ve prepared your sashimi at home, make sure that as soon as it’s thawed it’s either eaten or refrigerated within 4 hours.

The best way to tell if your fish is still fresh enough to eat is by the smell. Fresh seafood does not smell fishy!

When you think about sushi, you probably imagine a roll of rice, wrapped in seaweed, filled with fish and vegetables, right? If yes, that is maki sushi. It’s the most common style of sushi roll and often just called sushi. There are a few variations, however, which are distinguished from a typical roll.

Temaki, for example, is similar but shaped like a cone instead of a log. Hosomaki is a pretty standard sushi roll, but it only has one ingredient in addition to the rice. So, for example, a tuna roll with nothing but tuna and rice would be considered Hosomaki.

Nigiri sushi is a block or mound of sushi rice topped with a slice of fish, either raw or cooked. It isn’t rolled like maki, but sometimes it will have a strip of nori, or toasted seaweed, in between the rice and the fish.

Often there’s wasabi included in nigiri sushi, so if you are averse to spice, beware of this particular type of sushi. Here’s a fun fact for you: nigiri is the Japanese word for “two fingers”, an indication of the portion size of rice used to make the sushi piece.

How many calories are in sashimi?

Many people who are dieting look to Japanese food as clean, wholesome and often low-calorie food, but how many calories are in your sashimi really depends on the type of meat you choose.

Sashimi will usually have anywhere from 70 – 200 or more calories in a 3 – 4 ounce portion size. High-fat fish like salmon and tuna will have more calories, but they also have a lot of great nutrition, like healthy fats and a high protein count.

If you’re concerned about your diet, the best thing you can do is stick to sashimi – avoiding the relatively empty calories in the rice – and watch the condiments.

Avoid soy and miso sauce which are high in sodium and can cause bloating and water retention, and definitely stay away from spicy mayo type sauces. If you need a hit of extra flavor, choose pickled ginger or wasabi, which are both nutrient-dense.

How To Reheat Tacos – The Complete Guide

How To Dehydrate Olives – Step By Step

How To Make Dehydrated Chicken Feet

How To Make Maple Cream

How To Cool Angel Food Cake (Without A...