Can You Freeze Evaporated Milk? 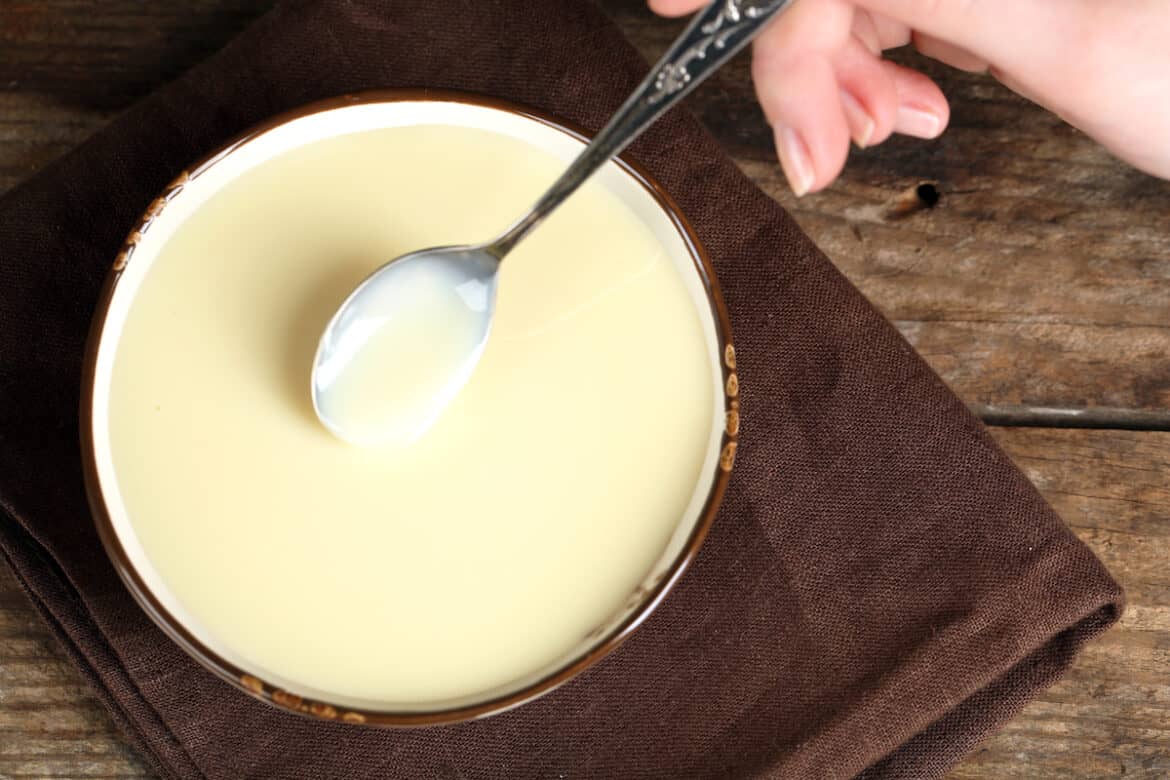 Evaporated milk can be used in so many ways. You can add some to your smoothies for a little bit of body, you can thicken up and sweeten your coffee, add some creaminess to soups and sauces, and use it in place of condensed milk in desserts.

It is made by processing 60% of the water out of milk, which gives it an incredibly creamy texture, but only a quarter of the fat that normal cream contains.

It is always handy to keep evaporated milk in the kitchen so you know it’s around when you need to use it. However, if you open a can or pack and don’t use all of it, can you keep the rest of it?

To help make the most of the leftover evaporated milk at home, learn how to freeze it, and whether or not you should freeze it by reading on!

How to Freeze Evaporated Milk

You can extend the shelf life of the evaporated milk in your pantry by freezing it. However, you need to do some preparation first.

Freezing your milk the wrong way can result in crystallization, major separation or curdling, and even spoilage.

You’ll want to be sure the milk is ready to be frozen and that it will fare well when frozen and thawed. Here are the steps to follow in order to freeze evaporated milk:

Tin cans definitely do not work well as freezer containers and have a good chance of bursting when left at a cold temperature.

When pouring the evaporated milk into a freezer container, poke two holes in the lid of the can so the milk flows freely.

These are the best options to use when freezing your evaporated milk:

If you don’t know how to use freezer trays, it’s simple! Pour the evaporated milk into the ice tray, in single cubes. Place this in the freezer until the cubes are frozen solid. Then transfer the cubes out of the tray and into a plastic freezer bag.

You can easily pick out one or two cubes at a time later. This way, you don’t waste defrosting a whole can if you don’t need to use that much. You can’t refreeze your evaporated milk once it is thawed, so portioning is a better option.

When you fill the containers, such as plastic freezer containers or plastic freezer bags, you should not fill them all the way to the top. Leave a bit of space for the liquid to expand. If you don’t leave room, you might have some evaporated milk exploding in your freezer!

You should label the container with the date of freezing, and the name of the contents. This is so important to ensure that you can easily identify the evaporated milk in the freezer and that you know when to use the milk by.

Once your evaporated milk is in its freezer container and has been labeled and closed tightly, you can place it in the freezer for long term storage.

Try to keep the milk at the back of the freezer. This helps to protect it from temperature fluctuations that might occur with the frequent opening and closing of the freezer door.

How Long Can Evaporated Milk Be Frozen?

Stored properly, evaporated milk can be kept in the freezer for up to 3 months. It will be fine to use after this length of time.

However, the quality will begin to decrease and it won’t have the same creaminess and richness that you would hope for.

Using it within 3 months will ensure that you still get to enjoy the good quality of the evaporated milk.

When You Should or Shouldn’t Freeze Evaporated Milk

Evaporated milk tends to separate when frozen and thawed. It won’t be well-suited for many different meals and drinks because of its post-freezing texture.

Evaporated milk separates when thawed, so there are few uses for it once it has separated. Here is what you can use frozen evaporated milk for:

You can then add sugar to the evaporated milk, or whipped cream, to sweeten it up, and then use it immediately with a dessert.

The beating at high speed helps to reincorporate the ingredients, which have not separated too much as the evaporated milk hasn’t been left to thaw completely.

Used in cooking – Evaporated milk is a perfect substitute for milk, half-and-half, and heavy cream in recipes. It does not curdle at high temperatures so it is a great substitute when used in cooking.

As the evaporated milk might separate when frozen and thawed, using it in cooked recipes helps to hide the separation a bit, and ensures that the milk does not go to waste.

If there is any leftover evaporated milk, you can add it into mashed potatoes, mac n’ cheese, soups, and stews.

Baking – You can use frozen and thawed evaporated milk when baking. It is fine to be used as a substitute for milk in bread recipes and can be used to bake cakes, cookies, and even delicious pies.

When You Shouldn’t Use Frozen Evaporated Milk

As the thawed evaporated milk separates, it becomes unusable for certain recipes, drinks, and meals. It can be difficult to reincorporate the milk solids and liquids once they have separated. This can only usually be hidden when it is added to cooked dishes.

Here are some purposes you would not be able to use frozen evaporated milk for:

Smoothies and drinks – You will not be able to thaw evaporated milk in smoothies, tea, or coffee. The separated milk solids and the liquids just would not taste great and would give the drinks an odd texture. No one likes chunky coffee.

Oats – Some enjoy adding evaporated milk to their oats, but once again this isn’t recommended if the milk is separated from being thawed. It will just add an unpleasant texture to your oats and probably put you off your favorite breakfast!

We hope this quick and simple guide to freezing evaporated milk is useful! Just in case you need more information, however, we’ve added some other related questions here for you:

How Long Does Evaporated Milk Last in The Fridge?

How Should I Thaw Frozen Evaporated Milk?

You should leave frozen evaporated milk to thaw in the fridge overnight or for a few hours. This is the safest way to thaw the evaporated milk. This will ensure that it does not become exposed to temperatures that could cause bacteria growth.

How Can You Tell if Evaporated Milk Has Spoiled?

The best way to tell if evaporated milk has spoiled is to smell it and have a look at it. If it has an off odor, an odd flavor, or has a change of appearance, it should be discarded.

Evaporated milk can sometimes form a film on the top or a milk skin, but this doesn’t always mean it has spoiled. You can simply whip the evaporated milk together to remove this skin.

Can You Make Homemade Evaporated Milk?

Yes, you actually can make your own homemade evaporated milk if you don’t have any for a recipe. We’ve found this tutorial on making evaporated milk by the Bigger Bolder Baking Channel on YouTube for you to check out below.

If you have leftover evaporated milk that you are worried will spoil, you can definitely freeze it. Just remember that once evaporated milk has been frozen and thawed, there is a good chance that the milk solids and liquids will separate.

This separation is fine if you are planning on using the thawed evaporated milk in cooked or baked recipes. But it should not be used for smoothies and other meals which do not undergo any cooking, where the separation will be apparent.

It is also a great idea to freeze your evaporated milk in small portions or cubes so that you won’t have to defrost it all to use it again and risk wasting a good portion of the thawed milk.

Never refreeze evaporated milk, as it will not only lose all of its texture but it may spoil and foster bacterial growth.

Up Next: Can I Freeze Rice Milk? – The Step-By-Step Guide

Can You Put Paper Plates In The Microwave?

Can Wine Freeze? – Everything You Need To Know

Thank you for your thorough guidelines in preserving leftover evaporated milk! So very helpful!!