Can You Eat Tempeh Raw? – The Risks 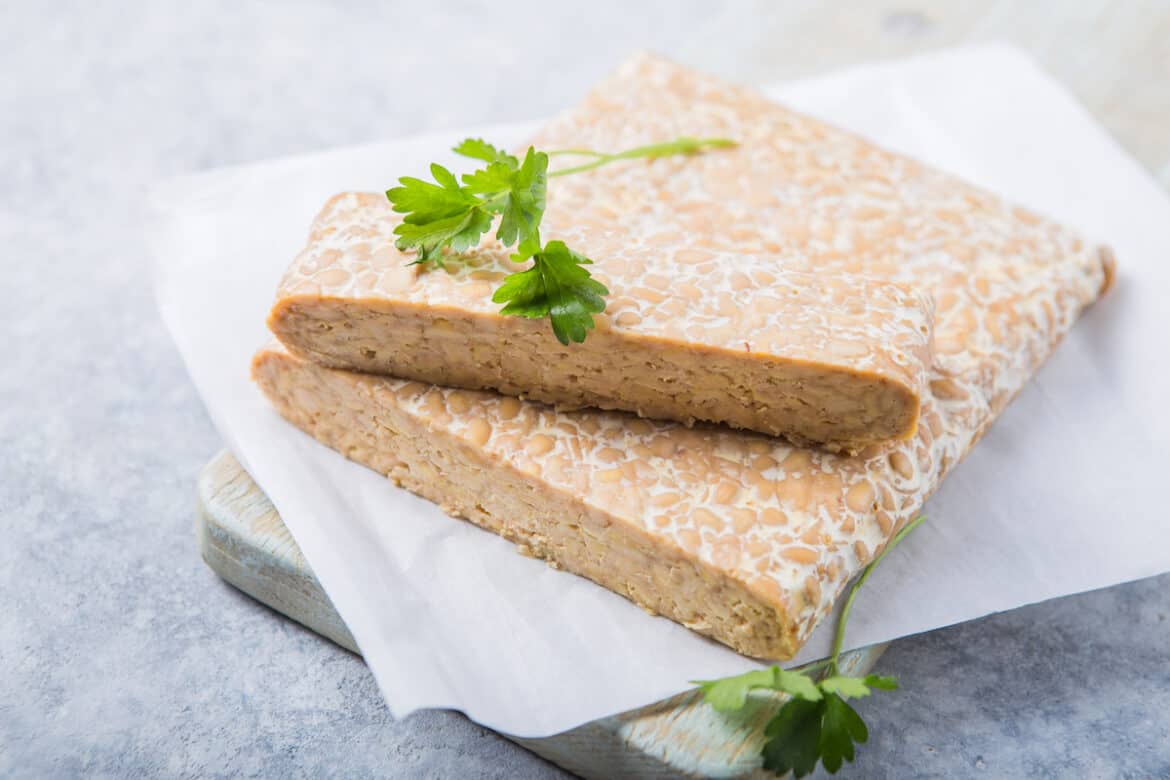 Tempeh is one of the most popular meat substitutes on the market as well as a popular ingredient used in many Asian cuisines.

No one denies its health benefits or its delicious flavor. However, there is a very heated ongoing debate as to whether it can be consumed raw or not.

So, is it possible to eat tempeh raw? While there are arguments on both sides for whether or not you can eat tempeh raw, it is safest to cook your tempeh regardless to avoid any potential health risks.

Instead of risking raw tempeh, you can enjoy it in a delicious, fully-cooked meal or buy pre-cooked tempeh. Trust us, you will still enjoy it!

In this article, we will have a look at the evidence for both sides. However, we want to be very clear that we always recommend taking the safest route possible when putting anything into your body.

Tempeh is a traditional Indonesian product that is produced using fermented soybeans. It is very popular in Western culture as part of meat-free diets like veganism or vegetarianism.

If you are unfamiliar with tempeh, it is very similar to tofu. The main difference between tempeh and tofu is the way they are prepared (tempeh being fermented). Tempeh also includes beneficial prebiotics.

Here is where the controversy comes in. Can tempeh be eaten raw?

Why Not To Eat Tempeh Raw

First, let’s dive into the reasons why most people agree that it is best not to eat tempeh raw, so that you can keep these safety concerns at the front of your mind while we explain the opposing perspective.

1. It Is a Fermented Food

The process of fermenting foods involves allowing the food to sit at room temperature (or even warmer and more humid temperatures) for natural bacteria to be produced and to grow.

This is a very popular production method that is used in many popular products such as wines, pickles, sauerkraut, kimchi, and vinegar. However, if done incorrectly, this process can pose many health risks.

Equipment should be sterilized before producing any fermented food. This includes any equipment that will come into contact with the food from the start of the process until it is packaged.

Some aspects include the workers handling the food, mixing equipment, machinery, surfaces, and even the packaging itself.

Failing to sterilize equipment could introduce toxins or harmful bacteria that will multiply in these conditions and could cause foodborne illnesses like botulism.

Rhizopus, a fungus that is present in fermented foods, can be the cause of rhinocerebral mucormycosis, a rare but potentially fatal disease. However, it is likely only to affect those who are immunocompromised.

Just like the good bacteria, this fungus and other potentially harmful bacteria multiply under the ideal conditions of fermentation.

Alaska has the highest number of cases in the United States of botulism, due to the traditional Eskimo practice of fermenting many foods (mostly meats) in un-sterilized environments.

Besides the previous argument of sterilizing equipment, if tempeh is not produced in a registered factory where safety measures required by law are implemented, you will have higher risks of contamination.

However, a shocking amount of tempeh is produced in or even imported from home kitchens.

Now we are all for supporting local business, and plenty of home cooks have the deepest regard for sanitation. But when it comes to products where sanitation is of the utmost importance, you need to be sure that the company that produces it follows certain rules.

The easiest way to tell if tempeh was produced by a company that follows legal health regulations is to check the packaging.

Somewhere on the packaging should be a customer helpline, website link, or some certifying stamps that state it was safely produced.

If you are unsure about the product, don’t risk it. You can always support your local businesses in other ways!

There has been research done by many institutes, including the World Health Organization (WHO) on fermented foods that have found carcinogenic by-products such as ethyl carbamate (urethane) in fermented and pickled foods.

The WHO has classified it as “possibly carcinogenic” based on these studies. This means that it could possibly increase a persons’ risk of developing cancer.

4. Made From Fermented Soy Products

Fermented soy may produce many side effects when consumed. Some include flatulence, bloating, itchy throats, and even chronic inflammation.

However, these side effects aren’t found in every consumer, so it differs from person to person. It goes without saying that you shouldn’t consume tempeh if you have a soy allergy or intolerance.

We couldn’t find any scientific or fact-based reasons that prove you can eat tempeh raw, so the information stated below is based on what a large number of tempeh consumers state as to why it is more beneficial to consume tempeh raw.

Tempeh is consumed for its high nutrient content. It contains iron, calcium, riboflavin, niacin, magnesium, and much, much more. It also contains a ton of prebiotics, which help improve digestion and absorption of nutrients.

Cooking tempeh, like any other food, will reduce its nutrition content, as you lose a lot of moisture during any cooking process.

Rhizopus is a mold that is used when producing (fermenting) tempeh. It is not typically considered harmful, as it assists in the fermentation process and is naturally produced by many fruits, vegetables and even some nuts.

This should be the only bacteria present in tempeh. However, as we mentioned, it can be dangerous for those who are immunocompromised.

The arguments listed below are just our opinion, and we are not stating that tempeh can or cannot be consumed raw.

That said, we always believe it is best to choose the most cautious option, which means cooking your food before eating it unless it has been definitively proven to be harmless raw.

Do your research on this topic and make an informed decision before taking any unnecessary risks.

Like we already stated, we couldn’t find any scientific evidence that proves you can consume tempeh raw. All the information that supports this standpoint is opinion-based.

Sure, some people might not have had side-effects, but that might also be luck, placebo, or a lack of observation. The majority of consumers, as well as suppliers, insist on cooking it.

Cooked tempeh consumers claim it tastes better that way anyway, but that, of course, is also a matter of opinion.

That said, botulism and rhinocerebral mucormycosis are two very real, very dangerous diseases that have been undeniably linked to raw fermented foods. Again, it is always better to be cautious.

Human error is to be expected. It is a very well-known fact that the majority of tempeh producing factories do not comply with safety regulations.

Even if you do have companies that strictly comply with the rules, if undetected spores of harmful bacteria enter the production chain, it could have massive consequences and many people could become ill.

3. Cooking Is a Simple Solution to Eliminate Harmful Bacteria

By just cooking your tempeh, you can eliminate any harmful bacteria that could be present. It is a very simple, quick, and easy step that will give you peace of mind.

We will also mention that many tempeh products are pre-cooked, and these packages are usually labeled as ready-to-eat. We feel that this supports the argument that it should be cooked before being consumed.

Plus, you’ll probably find it much tastier that way!

Considering there is scientific evidence that proves that there are very possible and dangerous risks involved when consuming raw tempeh, why would you want to risk it anyway?

Yes, some people do claim that you lose nutrients when cooking tempeh (which is true) and that the taste becomes blander (which might be a personal preference, but you can always adjust your cooking method to add more flavor).

But is any of that worth risking ending up in the hospital? We think not.

A lot of consumers, who feel that there are too many risks involved in consuming raw tempeh, simply buy pre-cooked tempeh. This is usually indicated on the packaging by stating that it is pasteurized, pre-cooked, or ready-to-eat.

Is Tempeh Bad For You?

Tempeh is made of soy, which means consumption can be a little controversial!

Whether soy is bad for you – at all or in excess – is one of the oldest and most active debates since soy has become mainstream!

Although this article isn’t about soy itself, it is a factor to take into consideration when talking about why tempeh shouldn’t be consumed raw.

We’re not scientists or doctors, so we’ll just outline a couple of the concerns with eating tempeh.

It Is Made From Soy Products

Soy does have a lot of benefits, such as improving your digestive system and containing tons of nutrients.

Those who view this as a good reason to eat tempeh raw do recommend consuming raw tempeh in moderation, as the FDA regulates.

If you do not have any other form of protein in your diet to make up your daily intake, it would be in your best interest to find another to prevent over-consuming soy-protein.

If you need a few recommendations, we have an article on the best high-protein vegan yogurts.

According to the FDA, you should only consume 25g of soy protein per day, which equates to 125g of tempeh.

Although it might not sound like a lot, if you do not have any other form of protein in your diet other than tempeh, and only consume it as your main source of protein, you could suffer from side effects of the soy.

Up Next: Can You Freeze Tempeh?

Can You Eat Zucchini Skin?

29 Foods That Start With N