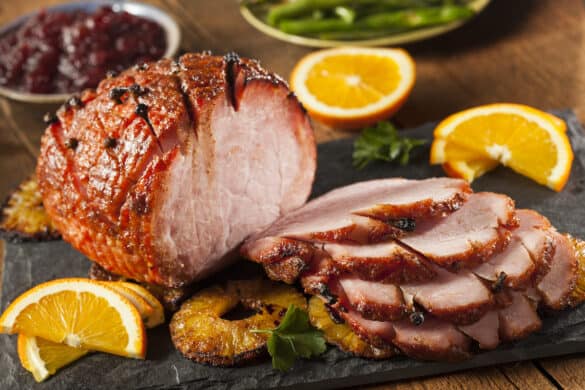 There’s something about a ham that’s just perfect for any occasion. It makes a great centerpiece for a holiday meal or you can pick one up from the store to make sandwiches, omelets, and other delicious meals during the week.

Ham is a type of preserved meat made from the hind leg of a pig. It can be wet or dry-cured with different spices, sweeteners, and flavorings to create a unique and delicious meat product. Some hams are smoked, but it’s not a requirement.

But what happens if you pick up a ham from the store, enjoy a few pieces for dinner or at a family brunch, then pop it back in the fridge, forgetting about it for several days?

Oftentimes you’ll open the fridge to find that your ham has gone slimy on the outside and wonder if that means it’s bad.

So, can you eat slimy ham? Generally speaking, slimy ham is an indicator that bacteria has started to grow in and on the meat, which can cause food poisoning and other unpleasant symptoms. To be safe, I don’t recommend eating raw cured ham that has gone slimy, even if you cut off the outside.

Read on to discover more about how ham is made, how long it lasts in the fridge, whether you can eat slimy ham, if cooking slimy ham is safe, and more!

How Is Ham Made?

Before we dig into whether slimy ham is safe to eat, it’s important to understand how ham is made.

Ham products are made from the hind leg of a hog and there are many types of ham that you can enjoy.

Some types are dry-cured, while others are wet-cured, some are smoked, and some are a combination of two of these different processes.

To make a dry-cured ham there is no water involved. The cut of meat is either rubbed with lots of salt to kill off any bacteria (salt is antibacterial) or buried in salt then covered in other seasonings like pepper or sugar.

Once the meat is properly salted, it is hung up for several weeks to several months.

Essentially this process removes the blood and other liquid from the ham so that you’re left with a dry-cured piece of meat. One of the most popular types of dry-cured ham, and my personal favorite, is prosciutto.

Wet-cured ham is made using a brine, which is a mixture of salt and water. Many producers will add their own special ingredients to the brine to create a unique flavor, such as liquid smoke, sugar, and spices.

The piece of meat is left in the brine for at least several days to allow it to penetrate the inside.

Once the ham is wet-cured it may be cooked or smoked. Wet-cured ham is typically the most popular type of ham you’ll pick up at the store, so make sure you find out whether it is ready to eat or if it needs to be cooked first.

Both dry or wet cured hams can be smoked to add another layer of flavor.

How Long Does Cured Ham Last?

Once you pick up your cured ham, it’s important to figure out how long your cured ham will last. Typically, if it is vacuum-sealed, it could last for a couple of months in the fridge and it should indicate as much on the expiry date.

Other hams that have been processed locally or taken some time to travel to the grocery store may only last a few days in the fridge. Once you have opened your ham you should eat it within 3-5 days to prevent any spoilage.

While the curing process kills off any bacteria present on the ham at that moment, once it has been processed at the store or opened at home it becomes exposed to bacteria from work surfaces and hands.

This bacteria loves living in wet environments, so wet cured ham is susceptible to spoilage.

That’s why it is so important to eat your ham within a few days of opening. If you don’t think you’ll be able to work your way through an entire ham in that time frame, it does freeze really well.

Check out the instructions at the bottom of the article to properly freeze your ham for long-term storage.

Is Slimy Ham Safe To Eat?

Unfortunately, when it comes to slimy meat, especially a whole ham, your safest bet is to throw it away. Slimy meat is a sign that the ham has been colonized by bacteria.

These bacteria can cause food poisoning if they’re eaten, so it’s always safest to throw away a slimy ham.

There may be other signs that your ham has gone off such as a sour or rotten smell or greenish, grayish, or other discolored parts.

The slimy outside also can’t be cut off the ham since it just indicates that the bacteria are present. It is likely that they are also all throughout the inside.

Once the ham has finished the curing process, it is packaged and shipped to grocery stores and butcher shops.

From there, the deli and meat counter attendants can package and prepare it as they see fit. Cured hams should not be left out at room temperature for more than 2 hours (1 hour in the summer heat).

Some stores are more or less strict with food handling safety, which means that there is the potential for contamination of your meat right at the store.

It also increases when you bring it home and start handling it, which can transfer bacteria from your worktop, knives, and hands to the meat.

If your ham goes slimy, it is better to be safe and throw it away rather than risk food poisoning.

If you don’t think you’ll be able to eat your ham within 3-5 days of opening it, then I recommend portioning it up and freezing it for long-term storage. I’ll share the tips below on how to do so.

Can You Cook Slimy Ham To Make It Safe To Eat?

As I mentioned above, once a ham has gone slimy on the outside it is likely full of bacteria the whole way through.

Trimming the slimy bits off the ham won’t help and from what I can tell, cooking it doesn’t guarantee that it will kill off all the pathogenic bacteria either.

If your ham has passed the point of safety and gone slimy, cooking it isn’t going to help.

If you don’t want to get food poisoning, but you know you won’t eat your entire ham within 3-5 days, then you can definitely freeze it to save for later. This process will prevent food waste and food poisoning.

How To Properly Freeze Leftover Ham

If you’ve picked up a giant ham and have lots of leftovers, freezing them is a great way to keep them from spoiling and going slimy.

It’s super simple and the ham will last about 6 months in the freezer. You can keep it longer, but it may not be as good quality or develop some freezer burn.

Follow these steps to properly freeze and store your ham:

How To Thaw Your Ham

Once you’ve decided you want to enjoy your slices of ham, there are a couple of ways you can thaw it for the best results:

Up Next: Poblano Vs Serrano

I’m still wondering about slimy ham — mine is Beelers uncured fully cooked with a sell-by date of 12/13. Today is 12/4.
Also, Beeler’s is a company with all the humane, non-GMO, etc, practices… can there still be bacteria spoilage? I washed it and an going to freeze it until I know for sure or pretty sure.
Thanks!
I’ve been cooking for almost 50 years and I have always adhered to “when in doubt, throw it out…”