Home Foodsguy Ham Shanks Vs Ham Hocks – What’s The Difference?
FoodsguyThis vs That 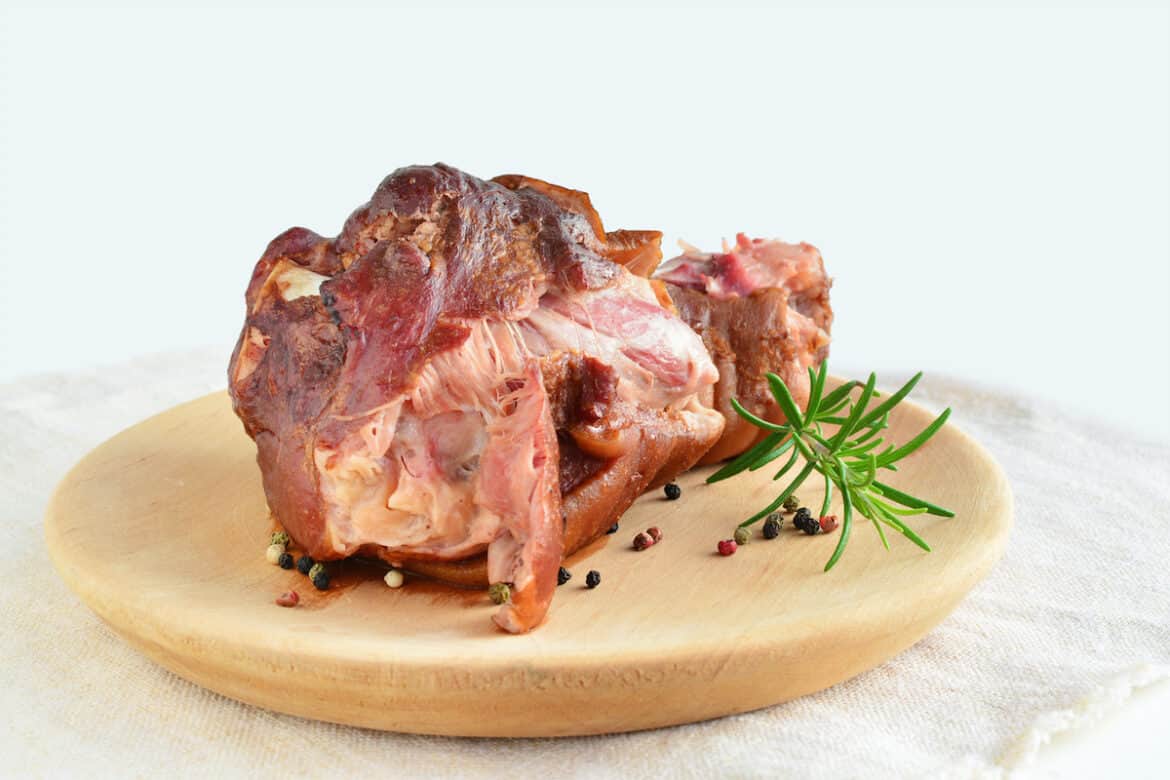 Ham shanks and hocks are highly underrated cuts of pork that are packed with flavor. They are both inexpensive, readily available, and are mostly already smoked, so they are ready to go in the pot!

Both make for great additions in various delicious recipes and are central for many types of broths. But when it comes to these collagen-laden parts, what is the difference?

So, what’s the difference between ham shanks and ham hocks? Ham hocks come from the lowest portion of the animal’s leg, near the ankle, while the ham hock is located just under the shoulder or hip of the animal. Both pieces contain lots of collagen and very little meat.

Read below to learn more about ham hocks and ham shanks, how they taste, how to use them, and the best way to make broths using each!

As mentioned, ham shanks are located and cut from just under the shoulder and hip of the animal. Shanks mostly consist of collagen, fat, and a little meat but some varieties can be meatier too.

Shanks are excellent and indispensable when it comes to making delicious stocks and broths for soups, sauces, and other umami-rich dishes.

The collagen and fat are wrapped around a bone and the entire section can be thrown in whole. What makes shanks so great is that they can be used in many ways.

For example, in Chinese cuisine, shanks can be marinated in soy sauce, garlic, and other herbs and then deep-fried in a large wok to caramelize and release the flavor of the meat.

The meat is then further processed by marinating it again in the sauce overnight to break down the collagen and then the entire piece is finally steamed. The result is a ham shank that is completely tender, juicy, and deliciously seasoned.

Shanks also make for great additions in stocks. As they are usually pre-smoked, they add quite a lot of complex flavors and a bit of salt to the mixture. You can find unsmoked variants in the market too!

Disappointingly, many people look the other way when it comes to shanks as it doesn’t offer the normal texture that is commonly associated with meat.

But if made the right way, it can be something of a revelation for many!

Ask your local butcher to give you a meatier shank if you wish to broil, braise, or roast it. We’ll also attach a few great recipes below to help extract the most out of their flavor.

As stated, shanks contain lots of collagen, fat, and a bit of meat so the first thing that you would notice is a thick white layer surrounding a large mass with a bone at the center.

The thick white layer is the collagen which has a soft and spongy texture. It can be quite chewy, especially if it is not cooked thoroughly but when cooked, the collagen will easily break apart and will be very tender.

Under the collagen is a layer of fat that is mixed with a bit of collagen and meat. When boiled or steamed, the fat will liquefy and seep through the layers and lend a very balanced and fatty flavor to the exterior.

Since the meat is mixed with fat and collagen it will have a soft and gelatinous texture. A great way to determine a properly cooked and tender shank is to twist and lift the bone at the center.

The bone should come off easily and cleanly and you should be able to break open the collagen layer using a fork.

To make the most succulent ham shanks you will need:

Ham hocks, also fondly called “pork knuckles” are similarly boney and collagen-laden pieces that have little to no meat on them.

They are located closest to the foot of the animal and are predominately used for stocks or soups.

Even though this piece of the animal doesn’t have much meat on it, it still lends a subtly gamey and fatty flavor. Their flavor is even more prominent when the hocks are smoked!

You can find these at any supermarket or butcher shop. They are relatively inexpensive, especially compared to meatier shanks and even one hock is enough to flavor dishes like spicy red kidney beans or sauce stocks.

For a more concentrated flavor, we recommend braising (boiling) 2-3 hocks over 3-4 hours.

We’ll get to how to use them in a bit. Let’s first discuss the texture of ham hocks!

Ham hocks are almost rectangular and have a bone at the center. The bone is surrounded by collagen and a bit of fat.

Visually, they look like big rectangular chicken drumette pieces except with the meat being at the center and the bone protruding from each end.

Texturally, ham hocks have a rough exterior and can be considered to be hard as the collagen located here is much denser than what you would find on the shank. Cooked hocks will reduce in size and can become very tender too.

Cooking them for substantially longer will result in the bone separating from the collagen and fat. This typically tends to happen when making broths.

Also, while there is little to no meat on the bones, you may still be able to scrape some muscle fibers from the bone or under the collagen. The meat is very tender, juicy, and has a softer, gelatin-like texture.

Typically, the bone and collagen are discarded and the meat is added back to the pot at the end – you can also choose to keep everything in!

While you can also BBQ ham hocks, they are best utilized when they are braised to extract their flavor.

Ham shanks and hocks have a lot of culinary use despite their lack of meat.

Even though both these pieces are largely made of collagen, fat, and bone, they are packed with flavor and can add a unique taste to any dish!

Here are a few more related questions on the subject!

Yes. Ham hocks and shanks share a similar texture and flavor. They are also made up of the same type of collagen and bone mixture, so you can use both of them interchangeably.

However, shanks offer a bit more culinary use than hocks so you will have to consider its use in the recipe – but for making stocks, both of them can replace each other.

Why are shank and hock broths sticky and have a gelatinous texture when frozen?

Shanks and hocks consist of collagen and fat. When simmered in water, the heat breaks down the collagen and releases the fat which gets distributed throughout the mixture, giving it a shiny and sticky texture.

When frozen or refrigerated, the molecules clump up together and form a gelatin-like texture which can be liquified again by adding the gelatin to a hot pan with a bit of water.

Up Next: Black Beans Vs Kidney Beans – What’s The Difference?