Can You Eat Shrimp Tails? 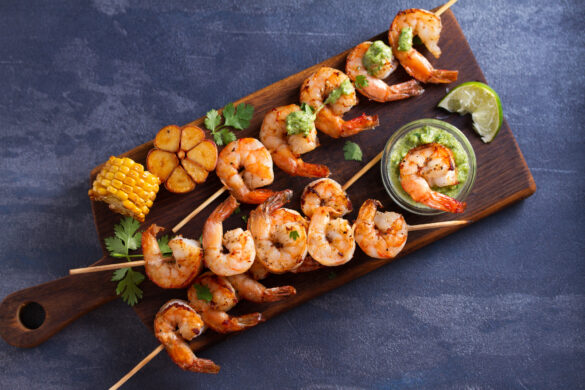 If you’re a fan of seafood, you’ll almost certainly have eaten shrimp, and you will know that most restaurants serve shrimp with the tail still on. Yet, these tails are usually pulled off and discarded before we eat the shrimp.

So, can you eat shrimp tails, and are they safe to eat? The hard outer shell of shrimp tails is edible, although it may represent a choking hazard. The soft inner flesh inside a shrimp tail is one of the most delicious parts of shrimp and should not be discarded.

In some cultures, shrimp tails are regarded as a delicacy and are served deep-fried as an appetizer!

Keep reading to find out why shrimps are normally served with the tail still on, what’s inside the tail, and whether it’s a good idea to eat this part of the shrimp.

What Are Shrimp Tails?

To discover whether we can eat shrimp tails, first of all, we need to have a little anatomy lesson! Shrimp are a type of aquatic creature classified as crustaceans. This means they have an exoskeleton, or shell, on the outside of the body.

If you look closely at a shrimp before it is prepared for eating, you’ll see that it has a hard body to which is attached a large head, 10 small legs, and a tail.

Because shrimp are normally served with the shells removed, we do not commonly see them in this state.

However, if you’re a fan of other seafood, such as prawns and langoustines, you may have come across them served whole inside their shell. These have very similar anatomy and body shape to unpeeled shrimps.

If you buy shrimp, or order them in a restaurant, they are commonly served in two ways.

They may be completely peeled with all of the external shell and legs, head, and tail removed. Alternatively, they may have everything removed apart from the tail.

The reason that the tail is left on is sometimes simply a matter of presentation and appearance. Chefs and seafood enthusiasts feel that shrimp look more attractive with the tail still in place.

Some people feel that leaving the tail on shrimp also enhances its flavor, in the same way that it is considered preferable to cook meat on the bone.

And if you are serving shrimp as finger food or appetizer, leaving the tail in place gives people a handy way to pick up and eat the shrimp without touching the flesh.

But are we missing something when it comes to shrimp tails? Could this part that we’ve always pulled off and discarded actually be tasty and edible? Let’s find out!

Can You Safely Eat Shrimp Tails?

The tail of a shrimp is attached to the body of this delicious and flavorful crustacean. The body is the part that most of us are familiar with eating. If the tail is left on, we normally pull this off and discard it.

To discover if we can eat the tail of the shrimp, we need to look at this part in fine detail.

At the point where the body attaches to the tail, it tapers into a thin point. This means the tail contains small amounts of flesh encased in a hard shell.

The shell of the shrimp that encases the body and fleshy part of the tail is relatively soft. At the very end of the tail is a harder, thicker piece of shell.

While in theory you could eat the shell of the shrimp, most people choose not to. This particularly applies to the very end of the tail, as this piece of shell is hard, crunchy, and unpleasant to eat.

The shell encasing the body of the shrimp and the fleshy part of the tail is also thinner and easier to chew. Generally speaking, the smaller the shrimp, the thinner the shell will be.

You could eat this section of the shell if you wanted to, but the texture will be very different from the soft and juicy interior flesh of the shrimp.

So, if you are served a plate of shrimp with the tail still on, you could try a little bit of the softer shell to see if you like it. We would not recommend eating the harder shell at the end of the tail, as this may represent a choking hazard.

Similarly, the hard shell of larger crustaceans such as langoustines should never be eaten.

There is one little trick that many people miss when pulling the tails off cooked shrimp. Inside the soft shell of the tail is a tiny but absolutely delicious piece of shrimp meat!

So if you gently peel away the shell rather than pull the tail off, you will be rewarded with one of the most succulent and tasty parts of the shrimp.

Do Most People Eat Shrimp Tails Or Not?

If shrimp are served with the tail still on, most people peel this part off and discard it. Leaving the tail on the shrimp enhances the flavor of the dish, but the tough, chewy shell is not pleasant to eat.

It is important not to overlook the soft and succulent piece of flesh inside the shrimp tail, which should be carefully preserved and eaten. The rest of the tail is normally discarded when is shrimp served with the tail on.

However, there are some circumstances where the shrimp tails are eaten and are often regarded as a delicacy! In northern Chinese and Thai cuisines, the tails of shrimp are served separately as a delicious appetizer.

The most common way in which shrimp tails are served is coated in flour and cornstarch, and then deep fried until crispy.

They are then sprinkled with seasoning, such as red pepper flakes.

Small shrimp are also sometimes cooked with not only the tail still on, but the entire shell, head, and legs. The exoskeleton on smaller shrimp tends to be much thinner and easier to chew.

The most common way in which whole small shrimp are cooked is by frying or broiling them.

So if you are served a plate of tiny whole shrimp with none of the shell removed, it may be intended that you eat the entire thing without peeling it.

So, when prepared and cooked correctly, the outer shell of shrimp tails is perfectly safe to eat. It is even thought that they may be beneficial in helping to reduce cholesterol levels.

If eating shrimp tails doesn’t appeal to you, then don’t throw away this useful flavoring. The tail of the shrimp, as well as the head, outer shell, and legs, contains the most intense and sweet seafood flavor.

These parts can all be simmered to create a rich and flavorsome seafood stock. This can then be used to cook peeled shrimp, or to make a separate sauce to serve alongside your seafood recipe.

Shrimp tails have a relatively subtle flavor. They taste similar to the flesh of the shrimp, but are milder.

However, the tails of shrimp and all the other parts of the exoskeleton have a very important role to play in cooking.

When shrimps are fully peeled before cooking, they do not tend to absorb much of the flavor of the ingredients they are cooked with.

When some or all of the shell is left in place, this traps ingredients inside the shell. This creates an intense hit of flavor as well as preserves the juiciness of the shrimp.

This is why many people prefer to eat shrimp that have not been peeled or have the tail still left on. Cooked in this way, shrimp tends to have a much more intense seafood flavor compared to peeled shrimp.

Should You Remove The Tails Of Shrimp Before Cooking Them?

If you’re a fan of eating seafood, you may have noticed that shrimp are only served with the tails on in certain situations. This is because the tail of a shrimp can be fiddly to remove.

Shrimp tails are normally left on for the sake of appearance and convenience, but in some circumstances it is better to remove the tail altogether before cooking.

There are two situations where shrimp are normally cooked and served with the tail still on.

The first situation is when the consumer will be able to remove the tail without too much mess and fuss.

For example, if you were serving a small appetizer with a few shrimp, or a fresh seafood salad, serving shrimp with the tail on will not create too much difficulty for the person eating it.

The second example is when leaving the tail on, the shrimp actually enables the person to eat the shrimp more easily. The tail of a shrimp can act as a handle, which the person can hold while they eat the body of the shrimp.

This is very common in deep-fried battered shrimp. The shrimp is held by the tail and dipped in the batter before being popped into the fryer. You can then pick the shrimp up by the tail and nibble off the body when it comes to eating it.

There is one situation where shrimp would never normally be served with the tail or any part of the shell still on.

This is when the person eating the dish would get far too messy if they had to pick up the shrimp with their fingers and pull off the tail.

If you picture a dish such as shrimp paella or seafood linguine, you can imagine just how messy peeling the tail off shrimps in this situation would be!

So, if you’re cooking shrimp in a sauce, broth, or another juicy dish, it is best to remove the tails first (give this a try). If you don’t, your guests are going to be begging you for more napkins and hand wipes to clean their fingers!

Here’s a quick tutorial from Clean & Delicious on YouTube if you’re ready to learn how to peel and devein shrimp:

Is Shrimp A Fish?

Can You Refreeze Thawed Shrimp?