Does White Liquid From An Onion Mean It’s Gone Bad? 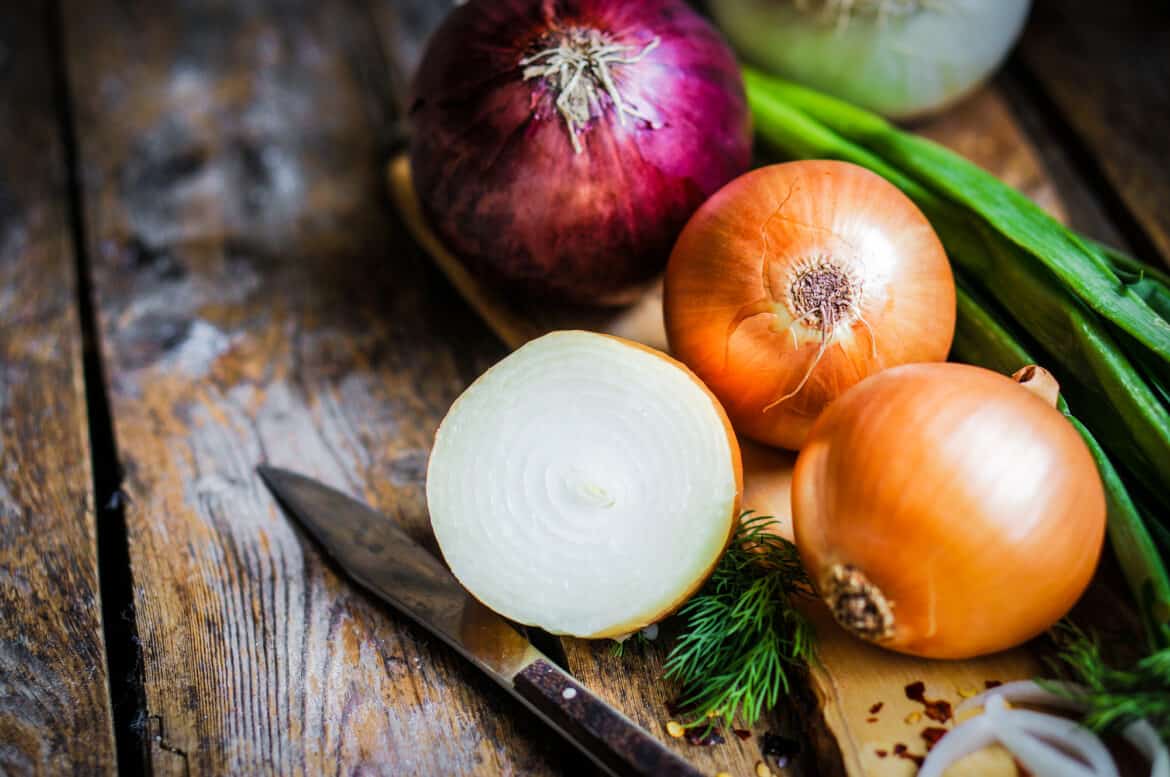 We use onions on a daily basis — most people do. They are incredibly versatile vegetables that are aromatic and add a ton of flavor to any dish!

Unfortunately, few people are truly educated on what certain characteristics or changes mean. The reason that this is important is that some of them can be very poisonous.

One common trait onions have is a white liquid that sometimes oozes from them. No one knows what it is, what it means, and what it does.

So, does the white liquid from an onion mean it has gone bad? It does, and it doesn’t. All onions have this liquid. However, it gets whiter and more fragrant as the onion ages. Eventually, when the onion starts going bad completely, this liquid is very white and can be poisonous.

Today, we’ll discuss everything you need to know about this mysterious liquid. We will go into what exactly it is, when it appears, how it evolves, and what it ultimately means at different stages.

Now, before just jumping into whether or not the white liquid is safe to eat, it’s important to know exactly what we are talking about. When it comes to vegetables, there are a couple of white liquids that you will find.

For onions specifically, this white substance is milky or off-white in color. It is sometimes very runny, and other times it has a slightly thickened consistency. It’s almost like milky juice.

This liquid comes from the cells of the onion. Depending on the age of the onion, the white liquid will start oozing out on its own. But, more often than not, it comes out when you slice the onions (slice through the onion cells).

But, as the onion starts aging, it becomes more prominent, which is when most people start noticing it.

The white liquid can be an indicator that the onion has gone bad. But only when it’s accompanied by other signs as well.

What Is The White Liquid?

Now, what exactly is the milky white liquid? This substance is a mixture of water, hydrogen sulfide, sulfuric acid, and sulfur dioxide. Hydrogen sulfide is what eventually causes the onion to burn your eyes.

As this liquid ages, it becomes whiter in color, gets thicker, and oozes out more easily.

It also develops an aroma. Sulfur is well-known for its pungent aromas, which are equally prominent when the milky white liquid ages too much.

Does White Liquid From An Onion Mean It’s Gone Bad?

As we have already mentioned, just because there is a white milky liquid on your onion doesn’t mean the onion has gone bad.

However, the older the onion gets, the more prominent this liquid is. The white liquid is only an indication of rotting onions when it is accompanied by other signs of spoilage.

Now, how can you tell the age of the onion (or whether or not it is spoiled) by the white liquid alone?

First, the white milky liquid will be very white. A fresh onion only has a slightly white liquid, like watered-down milk. But, if the onion starts going bad, this liquid becomes very white.

Secondly, the liquid will be very runny when it comes from a fresh onion. As the onion ages and starts rotting, this milky liquid becomes thicker — it can even turn into a gel-like substance.

After a considerable amount of time, an old onion will simply ooze out this liquid because the cell walls have started breaking down (as the onion deteriorates).

And finally, if the onion starts smelling like sulfur (rotting eggs), it is starting to go off or has already gone off beyond the saving point.

Now, unless any of these signs are really prominent, you will have to look out for other signs of a rotting onion.

Is The White Liquid Safe To Eat?

Again, it depends on the age of the onion and, ultimately, the white liquid. If the white liquid comes from a clearly fresh and young onion, it is completely safe to eat.

However, if there are any other signs of a bad onion (accompanied by a white liquid), then we don’t recommend eating it.

The same goes for a very gel-like white liquid that oozes out of the onion without any slicing, or an extremely smelly onion.

These are all obvious signs that the onion has gone bad. And they all present themselves through the white liquid of the onion.

Can You Prevent A White Liquid From Forming In Onions?

If the white liquid shows that the onion has gone off or is starting to, there isn’t much you can do to avoid this. All ingredients eventually rot. So, the best way to prevent this from happening is to use them before they do.

There are some ways you can elongate the shelf life of these fresh ingredients. But no matter what you do, they will all eventually go off.

Now, if you have white liquid in fresh onion, there are some ways you can remove or dilute it. Again, the white liquid is the juice found inside the cells of the onion. It becomes more prominent as the onion ages, but it cannot be prevented.

You can rinse your fresh onions to remove the white liquid from them. You can even soak them in water — it will also help prevent the onions from burning your eyes. The hydrogen sulfide is diluted in the white liquid when rinsed in water.

The freshest onions don’t have white liquid coming out of them.

Even when sliced, a super fresh onion won’t have white liquid come out. Their juice is relatively translucent and even odorless.

As the fresh onion starts aging, it does get a slightly white liquid. A fresh onion should only ooze out this liquid when it is being sliced.

Furthermore, there are some other very obvious signs of a fresh onion.

If your onion is fresh, it should have a uniform color without bruises or blemishes. It should also preferably have completely dry outer skin. No areas of the flesh should be exposed.

They should be smooth and have a firm texture. Fresh onions are also relatively odorless and only have faint spicy aromas.

How To Tell When An Onion Has Gone Bad

Luckily, there are loads of signs that indicate when an onion isn’t as fresh as it should be, and even signs that clearly indicate an onion should not be eaten.

If any mold appears on the surface of the onion (and on the root), it should be discarded. If there is minor black mold on the dry outer skin, you can just wipe it off. Make sure that the mold hasn’t infected the inside flesh.

Then, a rotten onion will also have discolored flesh. It is usually gel-like and gooey with brown, yellow, and black spots. That’s how it starts.

If your onion also has a very prominent rotten smell (from the sulfates), you should discard it. This is also accompanied by the jelly-like white liquid that oozes from the onion without being sliced.

Onions that are spoiling will also start losing their firm texture. A soft or squishy onion shouldn’t be used or eaten. You will also sometimes see that the soft onion has a slimy film over it. It is another sign of a spoiled onion.

How To Properly Store Onions

Storing onions isn’t hard. However, there are loads of techniques you can use to help extend their shelf life for as long as possible.

To start, always keep onions away from moisture and very humid places. It will help prevent mold from growing and the onions from sprouting.

Also, keep them in a relatively chilled area. It doesn’t have to be cold, but it should definitely not be warm. A pantry (cool dry place) is perfect for room temperature options. But, the crisper drawer in your fridge is even better.

Always keep onions away from other foods. They have very strong odors that are easily absorbed by porous ingredients, like dairy, meat, and cheese.

And finally, onions should be stored in the correct packaging. The best option is in an airtight container. It helps keep them dry and avoids any potential odors spreading. A Ziploc bag will do just fine.

If you have leafy onions, like spring onions, they should always be stored inside the fridge. The leaves will wilt if they are kept at room temperature.

Are Onions Vegetables? – Everything You Need To Know

Can You Reheat Onions? – The Best Way

Do Onions Go Bad? – What To Know

How To Reheat Onion Rings

Can You Freeze Apple Cider?