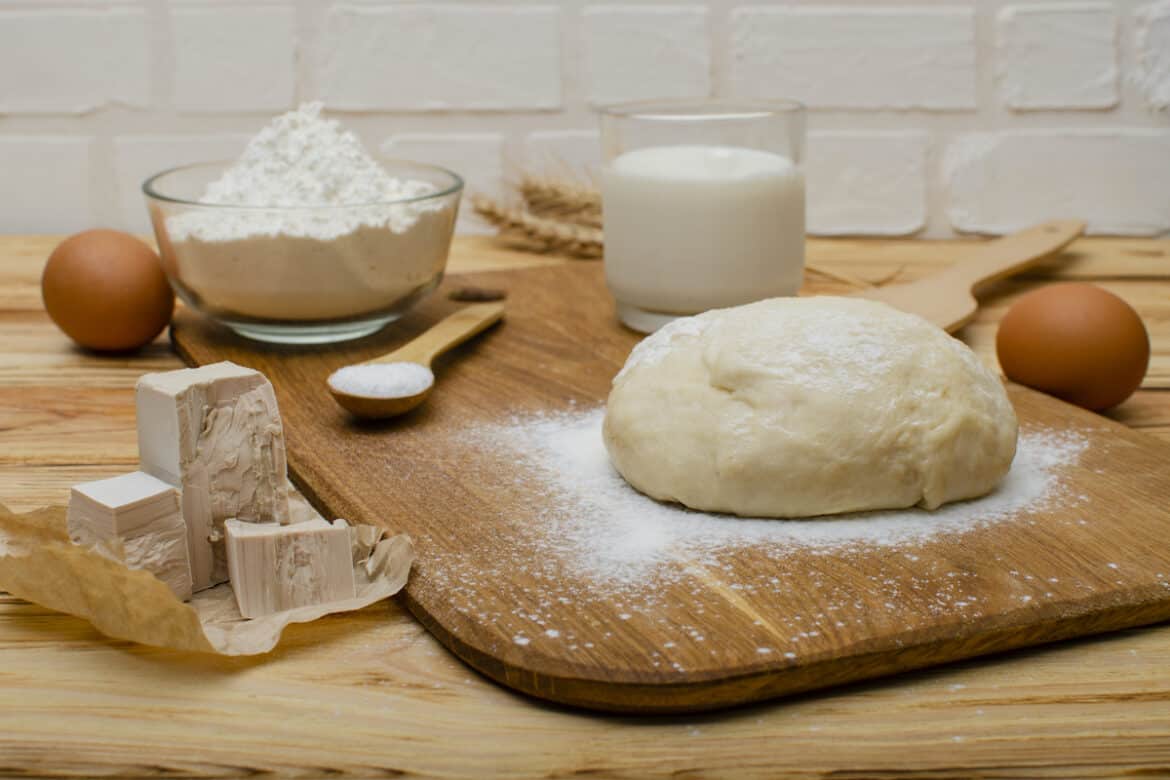 Recently we have started experimenting with bread doughs, specifically yeast-leavened ones. One thing we have immediately started noticing was that some of the recipes we tried doesn’t work at all!

So, after a couple of days of research, we finally realized that different ingredients called for in dough recipes can actually kill the yeast. This makes complete sense seeing as our loaves kept coming out dense and flat!

So, does salt have the ability to kill yeast? Salt can kill the yeast if it comes into direct contact with it or if the recipe contains too much of it. However, it is still an essential ingredient to help control the rate at which the yeast ferments. This is why it is important to use it correctly and in the correct ratios.

Below, we will dive deep into exactly how yeast works and what it needs to thrive. This will help you understand when and why salt (and other factors) sometimes kills yeast, how to avoid it, and even how to potentially fix it!

Today, we are specifically talking about baker’s yeast. Baker’s yeast is a strain of safe and beneficial yeast often used in baked products. Yeast can be used as a leavening agent in bread, doughs, and some pastries.

When yeast is added alongside ingredients that help activate it and feed it, it converts its sugars into carbon dioxide and ethanol.

This is what makes the bread rise during proofing and baking and what gives it that unique toasty and yeasty flavor.

There are a few different forms of baker’s yeast that can be used in baking. It is important to know which you are working with.

This is especially important when considering which ingredients inhibit or kill the yeast.

For example, if salt kills yeast, you don’t want to add it directly to fresh yeast. However, you could potentially add it with dry ingredients alongside dry yeast.

Today, we will only be mentioning the types of baker’s yeast that the general public has access to.

This type of yeast has a putty-like solid consistency and is beige. It doesn’t contain a ton of moisture but isn’t a dry “powdered” form of yeast. It comes in a wide variety of sizes but is a highly perishable ingredient.

This is why it isn’t commonly available at your local grocery store. You will be more likely to find it at a baking shop, or you can even buy small amounts at local bakeries.

Active dry yeast is arguably the easiest to find regardless of where you are situated in the world. This yeast is processed to form coarse oblong granules. When they are is live yeast cells encapsulated inside a “coating” of dead cells.

For this reason, active dry yeast first has to be proofed before being used in the dough for its leavening abilities.

This yeast has an extremely long shelf life because of its lack of moisture. Inside a freezer, the granules can keep for over 10 years!

Instant yeast is often confused with active dry yeast. While they are similar, instant yeast contains a lot more live yeast cells in each granule.

It is also much more perishable and doesn’t require any proofing (rehydration) before being used.

This is a lesser-known type of yeast, but very useful. It is a type of instant yeast but has even smaller granules.

This allows it to dissolve quickly in the dough, produce a lot more carbon dioxide, and ultimately make the dough rise faster.

Yeast is used to create fermentation in the dough, which helps give it rise. For the yeast to ferment, it requires three main elements: moisture, warmth, and food.

When it comes to the food part, yeast needs carbohydrates. This is what it uses to convert the sugars to carbon dioxide and ethanol.

The carbon dioxide (gas) is trapped inside a web of protein strands (also known as gluten). Gluten is developed when the dough is mixed.

Once the bread is heated (either during proofing or baking), these gas pockets expand and give the bread its rise.

The ethanol released is what helps tenderize the crumb of the bread. It gives it an overall more appealing texture.

Effects Of Sugar On Yeast

Okay, so the main ingredients that affect the workings of yeast are sugar, salt, and any other form of carbohydrate. Each of these has its own effect on this ingredient and used incorrectly, can prove fatal.

Sugar specifically acts as the main food source for yeast, regardless of which type you are using in your recipe. This is why you will see that every type of yeast-leavened bread contains sugar.

While being a literal source of life for yeast, it can also slow its fermentation down when used in too high amounts.

It acts as a dehydrator and removes the moisture from the yeast cells. If you remember, moisture is one of the three key elements to keeping yeast active.

Now, salt can kill the yeast. However, it is also an essential ingredient in yeast-leavened dough recipes. Salt acts as a dehydrator and helps control the rate of fermentation by slowing the activity of the yeast.

The trick comes in using it correctly and in the correct amount.

When yeast comes into direct contact with salt, especially the highly hydrated fresh type, it kills the yeast cells instantly!

The same happens when you add too much salt to a recipe. It will hopefully only retard the fermentation process, but it has the potential to completely overpower the yeasts’ ability and kill it.

How To Prevent Killing Yeast

Good active yeast is essential to making a fantastic leavened bread with a tender crumb and great flavor. This is why it is crucial to pay attention to the amounts a recipe calls for.

A fantastic tip and one we highly recommend is measuring out your ingredients by weight in grams. Not in volume or “packets”—especially when it comes to yeast, sugar, and salt.

The tips below are extremely helpful, especially if you have a recipe on your hands that doesn’t work as nicely.

Regardless of which yeast you use, never ever have salt come into direct contact with it. This will instantly kill it.

Rather mix the salt with the dry ingredients. You can incorporate the yeast into the dough alongside the liquid ingredients.

Yeast is very sensitive to high and low temperatures. Ideally, it should be between 80-90°F (27-32°C). Anything lower and the yeast’s activity will slow down.

If you see that your recipe calls for a ridiculous amount of salt, then rather reduce it. In general, bread doughs don’t require a ton of salt.

As a rough average, salt only makes up about 1.5-3% (also called a baker’s percentage) of the total weight of the dough.

You can easily calculate this and if it seems like the salt content is a lot, rather reduce it. While slat does have a tenderizing effect on the loaf, it can kill the yeast, resulting in a dense and dry loaf.

Use Sugar To Balance The Salt

Sugar can have a balancing effect on salt. The more sugar you have (if you have a lot of salt) the more food is available for the yeast to thrive on.

But, this is very tricky to do and it will also affect the flavor of the final loaf. Also remember, too much sugar can also slow the yeast.

Some recipes don’t call for sugar, in which case the yeast uses the sugars in the flour to feed on. This is where a pinch or two of salt will help the yeast get a leg up over salt.

How to Fix “Killed” Yeast

In our opinion, there is no way to fix your yeast once you have killed it. Your best option at having good bread is just starting over again.

But, if you want to dry reactivate the loaf, you can try incorporating more yeast into the made dough. This should be done by dissolving the yeast in lukewarm water (between the ideal temperature zones).

Then, gently knead the water back into the dough. Start the proofing stage again and see what happens.

We would recommend using a bit more yeast than the original recipe called for. This is because the mixed dough is quite heavy and will require a lot more leavening power to create an open crumb.

And, to not completely ruin the consistency of the bread dough, mix the yeast with just the right amount of water you need.

As we’ve said, there isn’t a good way to fix killed yeast, but you can give it a try.