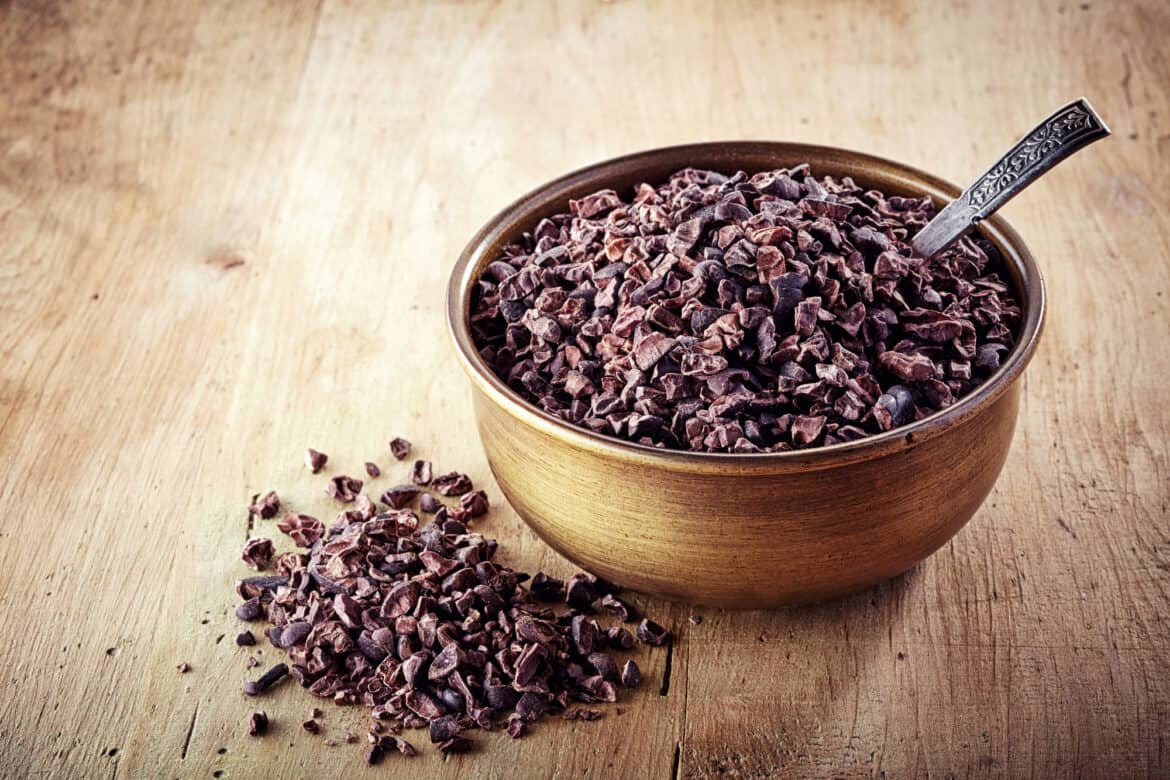 Cacao nibs have become increasingly popular (and accessible) over the last couple of years. They are frequently eaten as a healthy snack and incorporated into various chocolate-baked recipes.

However, not many people seem to know how to work with them. Now, if you have tried melting them, you would have quickly realized that these treats don’t melt. So how they are turned into chocolate?

So, how can cacao nibs be melted? Cacao nibs need to be ground as they slowly heat. The heat is usually applied through friction. However, you can also heat the powder to slowly melt the nibs. It may seem like a pretty straightforward explanation. However, there are loads of things that can go wrong.

In today’s jam-packed article, we will be looking at exactly how cacao nibs can be melted using a few different methods. We will discuss how these nibs work, what they require to be liquefied, and how you can use them afterward.

What Are Cacao Nibs?

Cacao nibs are unique ingredients commonly used in chocolate works and baking, but not many people actually know what these tiny chocolate treats are!

To better understand cacao nibs, we will first need to look at the cocoa bean.

First, what’s the difference between cacao and cocoa? You will often see these terms used interchangeably. However, you use them for two very different products.

Cacao is the raw and unprocessed form of cocoa. So, if you see a product labeled as “cocoa beans,” it means that they have been processed or worked in some way. If the product says “cacao beans,” they are unprocessed raw ingredients.

Now, what exactly are cacao or cocoa nibs?

What a tongue twister, right? But it’s important to understand these differences. This way, you will avoid buying relatively expensive ingredients without knowing what they are.

What Are Cacao Nibs Used For?

Cacao nibs are the base ingredient used to make chocolate.

The whole cacao beans are crushed into nibs. The nibs are ground into a powder, which eventually turns into a paste. As the paste heats up, it melts and eventually creates chocolate liquor.

The chocolate liquor is then used to create various chocolate products or blended chocolate flavors.

If you are making milk chocolate (as an example), only about 30% of liquor is added to the recipe (the maximum allowance to create milk chocolate).

The rest of the ingredients added include sweeteners (sugar), milk powders, stabilizers, flavor enhancers, and other similar additives.

This is an extremely oversimplified explanation of the chocolate-making process, but you get the idea.

A big misconception people have about cacao nibs is that they taste like chocolate.

Cacao nibs only taste like 100% pure or raw chocolate — they are the first building block of chocolate in its unsweetened and unflavored form.

So, if you were planning on using melted cacao nibs like melted milk chocolate, come up with another option. The addition of melted cacao nibs will be far too bitter to be a good substitute for regular chocolate. Unless, of course, you alter its flavor.

Cacao nibs are also edible raw and whole. Again, they will be bitter. However, many people love them as a healthy and sugar-free snack!

How Do Cacao Nibs Melt?

Now, seeing as cacao nibs are the base ingredient for making chocolate, can they be melted? Unfortunately, cacao nibs will never melt — no matter what tricks you try! Not in their unprocessed state anyways.

Remember, these nibs are pieces of an entire cacao bean. Trying to melt them would be like trying to melt coffee beans! It just isn’t going to happen.

But that doesn’t mean that all hope is lost. If you remember from our very simplified explanation of chocolate-making, you’ll remember that we mentioned cacao nibs are ground and then melted.

You can work cacao nibs into a ground form that can actually be melted. Then, you can incorporate your melted cocoa nibs (chocolate liquor) into your recipe.

So, how does this work?

So, as you now know, the only way that cacao nibs can be melted is if you grind them into a paste or powder.

While the cacao nibs are being ground, the fat (cocoa butter) and cocoa solids separate. The longer you grind the nibs, the more friction you create.

The friction eventually generates heat. The heat melts the cocoa butter. It then turns the cocoa solids into a paste.

The longer you grind the paste, the more liquefied your mixture will become. Eventually, you will have chocolate liquor, also known as melted cacao nibs.

How To Properly Melt Cacao Nibs

There are a couple of ways you can melt cacao nibs. The method you choose does, to a large extent, depend on the tools you have available.

However, it is important to know that the different methods will create various melted textures — not all appliances and tools can make silky smooth chocolate liquor.

So, let’s look at the best ways you can melt cacao nibs at home!

A melanger is an appliance used specifically to create chocolate liquor. You get tabletop versions that cost about the same price as a food processor.

This tool helps break down the cacao nibs and turns them into a fine powder. As it heats the contents, it slowly starts melting the nibs as they are worked. Eventually, the cacao nibs are melted.

This tool also allows you to blend the liquor with additional ingredients as it works it.

The biggest downside to using this appliance for melting the cacao nibs is that it takes a while and costs money. Sure, you get affordable options, but it’s not like buying a multi-functional blender. A melanger is only used to melt nibs.

Now, this may be a tool you have never heard of before as a wet grinder isn’t commonly used in Western cuisine.

You will likely find it in Indian cuisine where it is used to grind grains and pulses. These ingredients are ultimately turned into pastes and batters.

The tool itself consists of granite stone plates that break down the ingredient. What makes this tool efficient is that it creates less heat when it works — that means that you can actually create a coarse powder instead of a paste.

The powder is later slowly and gently heated to melt completely.

But, the longer you grind the nibs using the wet grinder, the more liquefied or paste-like the cacao nibs will become.

The biggest downside to this tool is that it won’t create chocolate liquor that is nearly as smooth as that created with a melanger.

Now, neither of these appliances is the best option — they will turn the cacao nibs into a powder or coarse paste in seconds. Sadly, few blenders can actually liquefy the cacao nibs completely.

When you eventually have a semi-liquefied ingredient or paste, you can melt it over medium heat.

Again, your chocolate liquor won’t be nearly as smooth and creamy as when using a melanger or a wet grinder.

How To Turn Cacao Nibs Into A Powder

To turn the cacao nibs into a dry powder, make use of a coffee grinder — a spice grinder will also work well. Usually, these two grinders are interchangeable, so you technically only need one or the other.

Neither of these appliances will generate enough heat to melt the fat (cocoa butter) and create chocolate liquor.

You can also use a food processor or blender. Just make sure that neither the appliance nor the beans are wet — this moisture may be enough to start turning the grounds into a paste as the cocoa butter melts.

Another way you can grind the cacao nibs into a powder is by hand. First, roast the nibs inside the oven, or toast them in a frying pan. It will help evaporate any excess moisture while developing a rich, toasty flavor.

Once toasted, you can grind them with a mortar and pestle. It is a labor-intensive process, but the only way to truly get a dry powder. Keep grinding until the nibs are pulverized.

How To Turn Cacao Nibs Into A Paste

Turning cacao nibs into a paste is easier than turning them into a dry powder. A paste does naturally form when using most of the tools we have mentioned above.

When you grind them for long enough (no matter which tool you decide to use), the fat will eventually start to melt. It will add more moisture to the mixture, which will eventually help create a paste.

But don’t work the nibs for too long. If you do, they will eventually turn into chocolate liquor, even if it is a little bit coarse.

How To Use Melted Cacao Nibs In Baking

Dark chocolate has been sweetened with sugar to create a more palatable ingredient. It also contains milk powder and stabilizers to make it creamy.

So, if you use melted cacao nibs in baking, only use them as a substitute for very dark chocolate (between 80-100%). You can also alter the sweetness of the recipe to make up for the overly bitter flavor.

You can also use melted cacao nibs to create fillings for baked goods. It can be a ganache, drizzle, or buttercream frosting. It is a fantastic way to help balance an overly sweet flavor.

How To Store Cacao Nibs – The Complete Guide

What To Do With Melted Chocolate