The Difference Between Bourbon And Whiskey 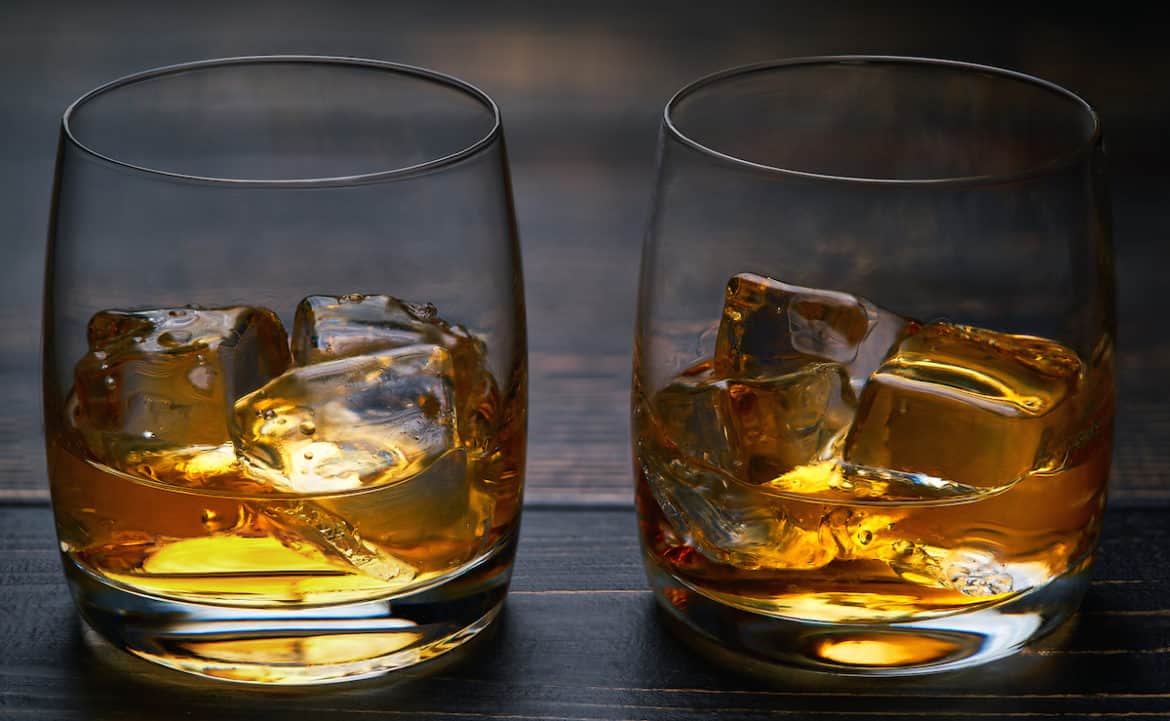 As many people like to say, bourbon is whiskey, but not all whiskey is bourbon. This can seem a little bit confusing to some, but if you are a lover of whiskey, you will know the difference between the two.

Many people use the terms “whiskey” and “bourbon” interchangeably, but is there a difference between them? There are two main differences when it comes to distinguishing between whiskey and bourbon. The first is the mixture of grains used to distill the alcohol, with bourbon being distilled from at least 51% corn.

To help you better distinguish between all of these, here is the lowdown on each!

When talking about whiskey, we should first end the age-old debate of how it is spelled. “Whiskey” is the spelling used within the US and Ireland, while “whisky” is used in Scotland, Canada, and Japan.

Either spelling is correct, it just depends on where it’s from!

Whiskey is a broad category that many different spirits fall into. It is an alcoholic beverage that can be made from different fermented grain mash, such as barley, corn, rye, wheat, and others.

Whiskey is aged in wooden barrels, which is imperative to giving it the color and flavor which it is so famous for. When whiskey is first distilled, it is called white whiskey or moonshine, it is then placed in the wooden barrels to age, and to acquire the color and taste it needs.

The grain used for whiskey needs to be distilled under 190 proof. If it is higher than 190 proof, it will be considered a neutral spirit, like vodka. True whiskey also needs to be exposed to oak.

The main differentiating points with all the types of whiskey is the grain that is used during the fermentation process, and where the whiskey is distilled.

By the way, if you’re looking for a fantastic gift for any whiskey or bourbon lover, my wife recently got me this whiskey glass set from Amazon and I’m completely in love, you at least have to take a look at it!

As it derives from Scotland, Scotch Whisky is spelled without the second ‘e’. Scotch Whisky is aged for longer than most other spirits, which gives it the strong smoky flavor, which many think of as an acquired taste.

You will be able to tell you are drinking Scotch on the first sip, due to its very strong and unique flavor.

This distinctive, and overwhelming taste, is often why Scotch is not used in cocktails as often as the other spirits and is instead enjoyed on the rocks or neat, allowing you to really enjoy the unique flavor profile.

Rye is similar to whiskey, made from mash that contains a minimum of 50 percent rye. It is less sweet than bourbon and is often used in place of bourbon. It has a distinctive spicy flavor and is often considered easier to drink than Scotch.

Rye, much like whiskey, needs to be aged in a new, charred-oak barrel for at least two years.

Bourbon needs to be made according to strict guidelines. Contrary to popular belief, bourbon can be made within any state in the USA, but the most famous bourbon state is Kentucky.

It is considered a straight American whiskey, but the grain mash needs to have at least 51 percent corn, and it needs to be aged in new, charred oak barrels.

It also cannot be added to the oak barrels above 125 proof, and often water is added to the un-aged whiskey to help bring it down.

To make understanding the difference between it all a little more complicated, there is Tennessee Whiskey.

The most obvious rule to a Tennessee Whiskey is that it needs to be made in Tennessee. It then has to qualify as a bourbon, with a 51 percent corn minimum, and distillation to under 160 proof, aged in a new, charred oak barrel.

However, there is an extra step involved to ensure it is Tennessee Whiskey. The final step is known as charcoal mellowing. Jack Daniel, as an example, makes their own charcoal at their distillery by maple wood which is burned down to coal.

This coal is then packed tightly into a large vat, and the freshly distilled, un-aged whiskey, is filtered through the charcoal.

If you want to understand this topic much better, I recently found a fantastic book on the history of American Whiskey, Bourbon & Rye that you should check out.

Is There Really A Difference In Taste Between Whiskey And Bourbon?

For those who do not drink whiskey often, there might not seem to be a huge difference in taste between the two, but for those who have a love for these spirits, the differences are obvious.

The reason the two taste so different is all to do with the ingredients used to create the spirit. Bourbon, made from corn, will taste different from whiskey made from barley.

The difference also has to do with the yeast strain used in the fermenting process, with Jack Daniel using a yeast strain that can be dated back to the Prohibition era, with the yeast still being grown fresh from the mother culture daily. This strain of yeast is a huge flavor factor, and if a different strain of yeast is used, there would be a major taste difference.

There is also the case of where the whiskey is made, with there being traditional Scotch Whiskey, Japanese Whiskey, Irish Whiskey, and American Whiskey, to name a few, so one cannot pinpoint down an exact taste to define.

Bourbon is easier to tell apart, as it often has strong notes of vanilla, caramel, and oak, making the bourbon smoother and easier to drink, as well as adding great flavors to cocktails.

The Most Expensive Whiskey

There is no doubt that whiskey lovers spend a decent amount of money on the whiskey they love, but sometimes this surpasses what we could imagine.

Whiskey is one of the most expensive spirits you can purchase, and there are many factors that go into how much a bottle of whiskey costs, such as the rarity, age, and uniqueness.

Now, to blow your socks off, you should know that the most expensive whiskey ever sold is the Macallan Valerio Adami 1926. This whiskey was bottled in 1986, making it around 60-years old when it was sold. Sold at Bonhams in October 2018, this bottle of whiskey fetched a price of $946 000.

The whiskey is a single malt, which was made in the Scotch Whiskey distillery in Craigellachie. Two prominent pop artists, Valeron Adami and Peter Blake were commissioned to design the labels for the limited edition 24 bottles.

Other than the rarity of the whiskey, the bottle is also presented in a specially commissioned cabinet, further adding to the price tag.

If you are considering becoming a whiskey collector, you need to make sure you have some extra cash to spend!

Is bourbon smoother than whiskey?

Bourbon is considered to be smoother than whiskey and is often the spirit stepping stone to leading up to drinking whiskey. For new drinkers, a sip of whiskey can really make you cringe with the strong, complex flavor. Bourbon is a little gentler, with a softer, yet still flavorful, composition.

However, there are some whiskeys that have been designed to be smoother, such as Irish Whisky, which is triple distilled to make it easy-drinking and smooth.

Why is Jack Daniel not considered a bourbon?

While ticking all the boxes of a bourbon, Jack Daniels takes it one step further in the distillation process that makes it different to a bourbon.

Jack Daniels, before placing the spirit into the barrels to age, slowly filter it through their signature maple charcoal, giving it the very distinctive taste that many love.

How should you drink bourbon?

To really enjoy bourbon, you should pour it slowly into a glass with a wide mouth, only filling the glass a quarter of the way.

Leave the bourbon to settle for a few seconds, and then place your mouth on the edge of the glass, leaving your nose over the glass so you are able to smell and taste it at the same time, really taking in all the notes of the aged bourbon.

Is whiskey a good substitute for Pernod in recipes?

Yes, whiskey makes a good substitute for Pernod when cooking. For other closer substitutes, we have another article waiting for you.

Whiskey And Bourbon – The Difference

So while bourbon is a whiskey, and not all whiskeys are bourbon, it can get confusing to tell the difference. To make it simple, remember that the grains used are different, barley for whiskey, corn for bourbon, and rye for rye. Whiskey can be made anywhere but is traditionally from Scotland, and bourbon is commonly made in the US.

If you have a more refined palate for whiskey, you will also be able to quickly pick up the difference in smell, taste, and smoothness. Start your whiskey journey with a bottle of both and get tasting!

The Bourbonite on YouTube has a great video detailing everything we’ve talked about above, but with pictures! Check it out.

And, if you’re interested in another interesting spirit, check out our article about making the perfect caipirinha.

The Difference Between Frittata And Quiche

Loved your article. The novice drinker should have a better understanding of the difference between these delicious spirits! I’m a lover of good bourbon (wheated preferably) and single malted scotch.