How To Cook Turkey Bacon In The Microwave 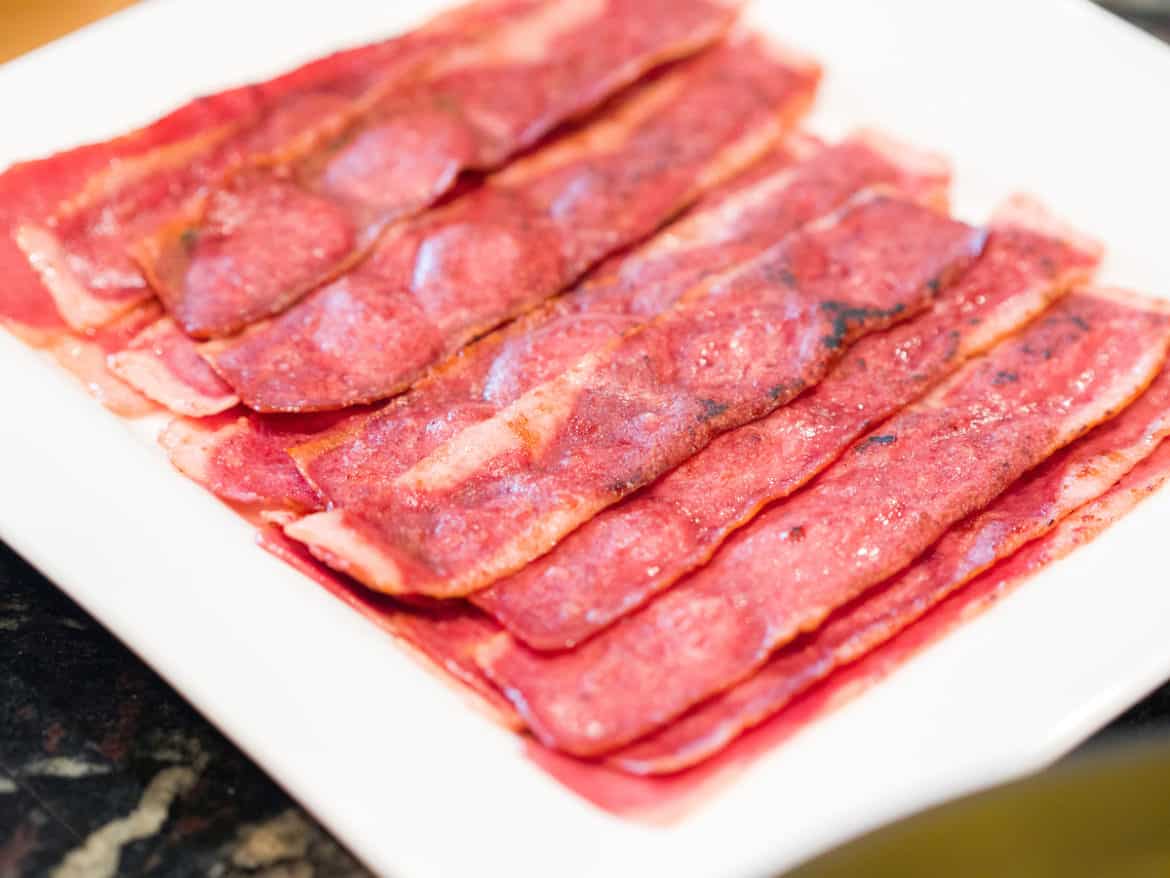 Unfortunately, bacon is not always considered the healthiest food choice. That’s why many of us have turned to turkey bacon. It’s a somewhat healthier alternative because it has a much lower fat content.

Turkey bacon is also delicious. If you need an alternative to everyday bacon, it’s a great choice. Here’s the thing though. We don’t always have time to fry up a package of bacon. It’s so much more convenient if we can just quickly heat a slice or a few slices and be on our way.

So, can you cook your turkey bacon in the microwave? Yes, you can. There are a few different ways to do it but the simplest way involves a plate, paper towels, turkey bacon, and just a few minutes of your time.

In this guide, we will walk you through everything you need to know about how to microwave turkey bacon. We will give you several handy tips and cover some various options. We will even give you another quick alternative tip you might find useful.

Keep reading to learn how to cook turkey bacon in the microwave and so much more.

Your Guide to Microwaving Turkey Bacon

Turkey bacon is quite similar to regular (pork) bacon in terms of how it looks and feels. The tastes are even fairly similar. You can also buy turkey bacon in a variety of styles, including hickory-smoked, Applewood, thinly sliced, thick-cut, etc.

Turkey bacon is made from turkey meat that has been chopped, cured, and then smoked. Turkey bacon is a low-fat option when you just need some bacon in your life.

Turkey bacon is also a great option for those who don’t eat pork bacon due to religious reasons.

Seriously, everyone deserves to enjoy SOME type of bacon!

Clearly, we understand that turkey bacon and pork bacon are not exactly the same. There are pros and cons to both types. There are specific reasons why you may want to eat one type of bacon over the other.

In the end, which is best is or best for you is ultimately up to you to decide.

But what exactly is the difference between turkey bacon and pork bacon? First of all, let us say that you can use turkey bacon in all the same ways you could possibly use pork bacon.

Here are a few ideas for you:

See, there are plenty of ways to use that turkey bacon, just as you would your pork bacon. Just consider turkey bacon an alternative to all things pork bacon and your options for use will be limitless.

Now, let’s get down to talking about the differences.

The one thing that is true of both turkey bacon and pork bacon is that both are heavily processed. Both types of bacon could potentially contain other additives. Just be mindful of watching ingredients and processing information on your packages to be fully informed.

Turkey bacon is lower in both fat and calories than pork bacon is. Turkey bacon tends to have far less grease while cooking as well. There will still be grease but not quite as much.

You can purchase both turkey bacon and pork bacon at just about any grocery store that sells bacon. Unfortunately, the selection of pork bacon is usually astronomically larger than turkey bacon.

You can cook both types of bacon in multiple ways. You can use the microwave, the oven, a frying pan, or even an air fryer to cook your various types of bacon. The classic way to cook bacon has always been a frying pan but the other methods produce similar results.

Both types of bacon are made from animal proteins. This means both of them have a variety of minerals and nutrients that can be good for you. The primary health difference between the two is the calorie and fat content.

One of the simplest ways to cook turkey bacon is to use the microwave. This allows you to cook just a few pieces at a time in a matter of minutes. And when you use the microwave, you don’t have to stand over a hot stove with popping grease to get that bacon cooked!

There are a number of ways you could cook your turkey bacon in the microwave. We are going to share the most practical method. This method does not require any special tools or utensils to cook your bacon.

Some brands of turkey bacon have instructions for cooking on the stovetop or in the microwave directly on the package. This is a great point of reference.

Here are your steps to cooking turkey bacon in the microwave.

There are special dishes for cooking bacon that can be used in the microwave. Some of them even have racks and a dish to catch the grease. You can absolutely use those to cook your bacon but they are not required.

It’s so simple and easy to microwave your turkey bacon for cooking! Be sure to store it in the refrigerator both before and after cooking.

Did you know you can also cook pizza in the microwave? May we even go so far as to say you could make turkey bacon pizza? Read this article to learn how.

We are not going to dive deep into alternative cooking methods but wanted to give a basic overview just to give you a bit of insight.

Cooking turkey bacon does not have to be done over a hot frying pan. While that’s the classic way to cook bacon of any kind, it can be hot and messy.

We’ve already discussed that the microwave makes a great alternative option. Did you know you can also cook your turkey bacon in the oven or even in an air fryer? You can also cook it on a griddle. All of these methods are quite easy.

For instance, in the air fryer, it takes about 4 minutes total to cook your bacon to a perfect crisp. And it tastes just like pan-fried bacon! If you use the oven, it takes just a little bit longer. You can layer your pan with foil and cook the bacon for about 20 minutes.

These methods are great alternatives to consider if you want a cooking method besides a microwave or a frying pan.

We hope that you have found this guide to cooking turkey bacon in the microwave to be helpful and informative. The process is quite simple and we think you will be pleased with the results when you give it a try.

In the following section, you will find some questions and answers. We invite you to check them out to see if the information therein could also be of value to you.

Is Turkey Bacon High in Sodium?

Pork bacon tends to get a bad reputation because it can be high in both fat and sodium. Turkey bacon also has sodium in it. However, the levels of sodium in turkey bacon are much lower than those of pork bacon.

How Long Does Turkey Bacon Last?

You can expect your uncooked turkey bacon to last about 2 weeks in the fridge and up to 8 months in the freezer. Once your bacon is cooked, it should be refrigerated. You can refrigerate it for up to 1 week and freeze it for up to 6 months.

You can test the look, smell, and touch of bacon to determine if it has spoiled. The smell is usually the most noticeable thing to pinpoint. The smell will be sour or even slightly fishy or odd.

Up Next: How To Tell If Turkey Bacon Is Bad

Does Maple Syrup Freeze? – And The Best Way To Do It

The Best Cornmeal For Polenta – The Ultimate Guide