How To Cook Pheasant – The Complete Guide 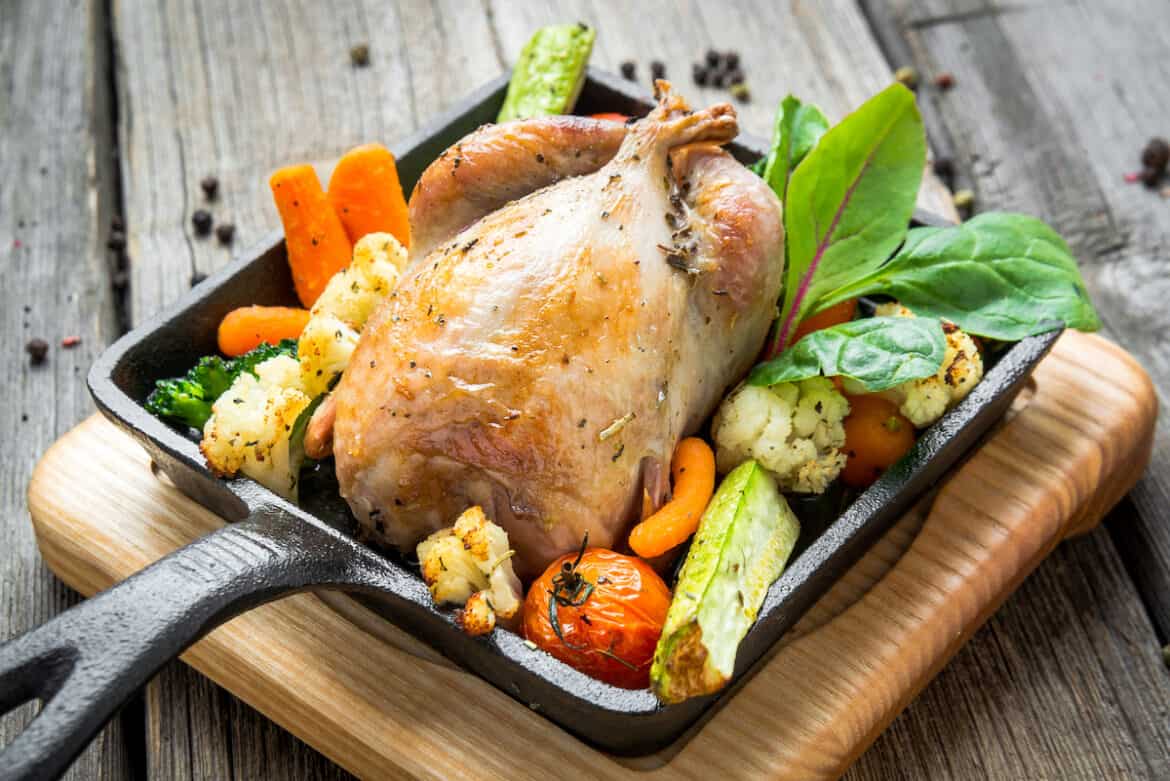 Cooked right, pheasant is tender, succulent, and has a subtly gamey taste. It really is a tasty bird to cook up, but you need to know how to do it properly.

Pheasant can be used in place of chicken or turkey in so many different recipes, but there are some rules to follow to ensure that it is cooked to perfection and that you make the most out of the bird.

Meat from a pheasant is denser and leaner than an indoor raised bird, so you have to be sure to add more fat to the bird to ensure it remains succulent and soft.

Keep reading for a detailed guide on how to roast pheasant, as well as some other good methods and important tips.

How To Cook Pheasant

When it comes to cooking pheasant, there are several good options. No matter which method you choose, you will want to add plenty of fat to keep the bird soft and juicy.

The Best Way To Cook Pheasant

The most delicious method for cooking a pheasant is to roast it in the oven.

When roasting a pheasant, you need to add plenty of fat to the bird. This will ensure that it remains soft and tender, and has enough juice to keep it flavorful.

Here is a step-by-step guide on how to successfully roast pheasant:

Note: You can skip the browning stage of cooking the pheasant, but then you will need to rub lots of fat directly onto the pheasant and extend the roasting time to around 30 minutes.

You will need to continue basting the pheasant regularly during roasting. You could also wrap the pheasant in streaky bacon to keep it tender and juicy.

Many people choose to slow-cook their pheasant, and this is a great choice if it is a late-season bird. These birds are usually more full-flavored and work wonderfully in a casserole.

Pheasants can be slow-roasted in a one-pot meal with other vegetables to create a delicious winter stew. Just add shallots, carrots, potatoes, herbs, and cider.

Left to cook slowly in a slow cooker, the pheasant will be fall-apart soft and all of the ingredients will come together to create a rich stew.

This will work wonders with the gamey, full-flavored taste of the late-season bird.

Pheasant breasts are wonderful to cook up for a quick and tasty dinner during the week, you just need to know how to cook them right.

Pheasant breasts only need to be cooked for a few minutes, so make sure to pay attention so that they are not overcooked.

Follow the steps below to cook delicious pheasant breast:

Pheasant breasts pair well with mashed potatoes and gravy made from the juices of the breast.

You can also chop up the pheasant breast and cook it in a curry or stew for a hearty meal, or even cut strips of the breasts use them in stir-fries, salads, and kabobs.

Pheasant breasts are incredibly versatile and can be used much the same way as chicken and turkey, but with a richer and more gamey taste, which adds depth to the meal.

If you are really looking to treat yourself to a delicious pheasant dinner, you could try stuffing the bird. This keeps it incredibly flavorful and gives you an easy side to enjoy as well!

This is a basic stuffing mix for a pheasant:

Mix all of the ingredients together until combined, and then gently stuff them into the cavity of the bird. Then roast the pheasant until it has cooked through properly.

Now that you have learned the different methods to cook pheasant, keep reading to find the answers to other common pheasant related questions.

How long should you boil pheasant?

Pheasant should be boiled for about 45 minutes until it has cooked through but is still tender. You need to add enough water or stock to the pan to reach halfway up the bird.

Close the lid on the pan and allow the contents to come to a gentle simmer for three-quarters of an hour.

Does pheasant need to be washed before cooking?

If you did not buy the pheasant from the butcher and it is not fully prepared, then you should thoroughly wash the cavity and dry it before you cook it.

Can you remove the gamey taste from the pheasant?

If you don’t enjoy the gamey taste of pheasant, you can try to remove the taste before cooking.

One way to do this is to soak the pheasant in buttermilk, saltwater, or water mixed with apple cider vinegar. Leave the pheasant to soak overnight if possible, but even a few hours soaking will help remove some of the gamey taste.

To further reduce the gamey taste, cut away the fat and silver skin from the meat. There should not be too much fat to cut away as pheasant is lean.

You will need to add in other fat such as goose fat or butter to keep the meat tender.

The Best Way To Cook Pheasant

Pheasant is such a versatile meat. The best way to cook pheasant is to quickly brown it in a hot pan with some fat and then to quickly roast it in the oven until it is just cooked.

This prevents the pheasant from drying out and keeps it flavorful, juicy, and incredibly tender.

If you do not want to roast the pheasant, you could also slow-cook it, fry it, or grill it. There are many options!

Can You Freeze Wonton Wrappers? – The Complete Guide