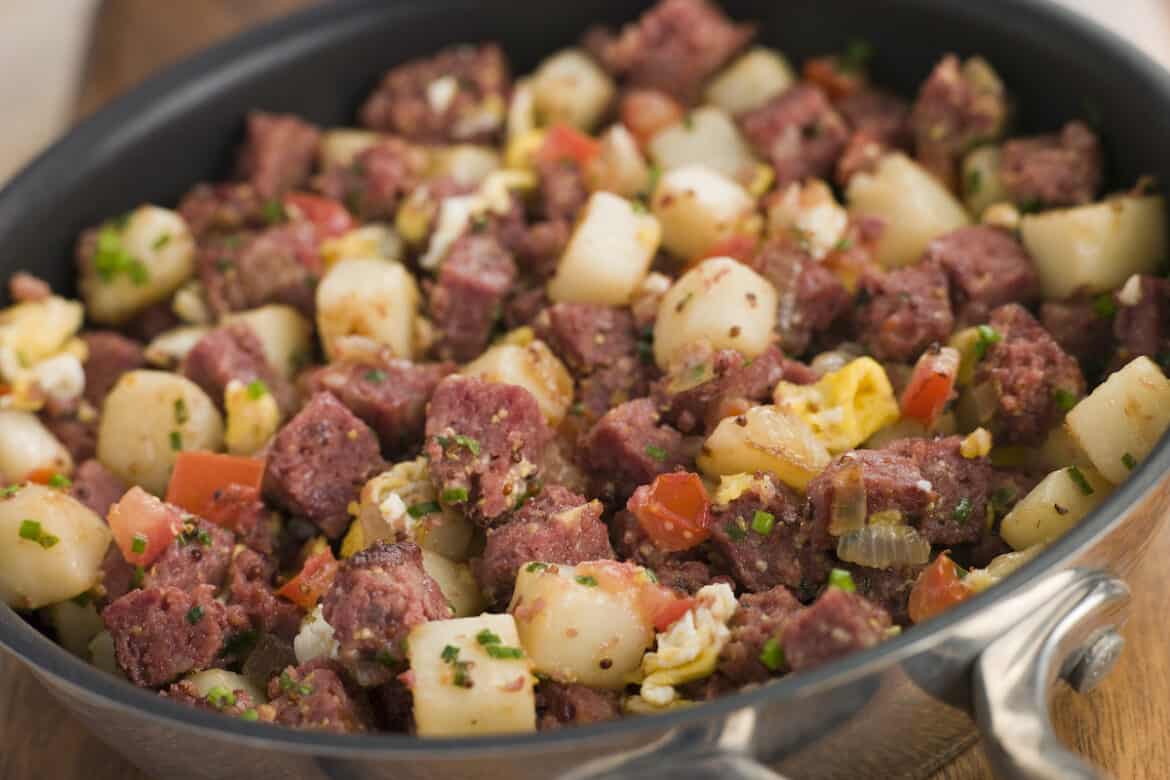 It’s quick, convenient, and a staple in many regions around the world!

Beef hash is the epitome of an inexpensive, delicious, and fast meal that is perfect for any time of the day. You don’t need to arrange a lot of ingredients to make this dish and it can be made within 5-8 minutes too, making it a big timesaver!

However, not many people know how to properly cook beef hash, and there are some key things that you need to keep in mind to get the best value and flavor out of this meaty dish.

How do you cook canned corned beef? The best way to cook it is in a skillet with onions, ginger, garlic, potatoes, and spices. Since corned beef is already packed with flavor, you don’t need to go overboard with the condiments.

To learn more about canned corned beef hash and how you can use it for multiple easy recipes, read on below!

Canned corned beef is a staple in many cuisines and is extensively used to make a lot of delicious recipes.

While its origins are not exactly known, humans have been curing meat for centuries so one can safely assume that the ideation of canning meat can be traced to at least the 18th or 19th century.

Curing was the only way to preserve meat because of a lack of refrigeration. Even tall ships carried rations of cured pork along with other dry grains to feed sailors.

Curing and smoking go hand in hand and are one of the best ways to enjoy meat without preparing it for hours.

Canned meat is called “corned” beef because it is cured using large-grain rock salt. These salt rocks are also called “corns” of salt.

Also, some people may be hesitant when using canned corned beef because of how it can be stored on shelves without refrigeration (if not opened).

There is a bit of science that goes behind this: canned beef is generally good for up to 2-5 years if kept properly. So how does meat survive this long?

It turns out that salt has a unique property.

When applied on moist surfaces, such as meat, it can draw out moisture from the molecules via a process called osmosis, thereby eliminating or limiting the growth of bacteria and fungi.

Cured meat can stay preserved for many years as long as it is kept properly.

Canned corned beef is prepared the same way. The meat may be first blanched to kill off any bacteria on the surface, then it may be cooked using either seasonings or via smoking. It will then be cured using one of many different methods.

Manufacturers may also add nitrates or nitrites to control the growth of specific bacteria over time.

However, the pros and cons of these substances are debatable in the health and science community. Always check the packaging for nutrition and allergen information before buying canned corned beef.

One thing is for sure, though; canned cured meat has revolutionized how we prepare food and has been a lifesaver for many people as it allows for superior convenience over using regular uncooked meat.

Not only is beef hash easy and inexpensive to make but it also packs a lot of flavor thanks to the added condiments in the meat. You can also customize the beef hash as per your liking.

When comparing to beef hash made from scratch, you would first have to trim the excess fat on the meat, marinate it for at least a day, and then cook the meat over a pressure cooker for 30 minutes.

On the other hand, with corned beef, you will just have to open the can and pour out everything into a pan!

To make the beef hash, start by opening a can of corned beef and pouring the contents out into a lightly oiled pan.

For the best flavor, you are going to give the beef a quick sear. To do this, simply use a heavy bottom cast iron pan and turn the heat up.

Remember, corned beef is usually already precooked unless stated otherwise on the back of the packaging.

If the meat is already cooked then you will only be adding some caramelization to the meat. Do not overcook the meat by letting it cook for more than 5 minutes.

When you put the meat into the pan make sure you spread it out evenly. Cook it on all sides, making sure that you get a uniform brown color across the pan. Once that’s done, dish out the meat on a separate plate and let it cool.

Traditionally, beef hash is served with mustard. This is because the acidic and tangy flavor of the mustard pairs extremely well with beef and potatoes!

Also, keep in mind that the above recipe is a very basic version of canned corned beef hash and can be used as a foundation for your own version.

For example, many people would avoid using tomatoes and go straight with just the onions and potatoes. Additionally, you can also add Worcestershire sauce along with the above condiments to add a more complex layer of flavor.

If you are looking for more ways to cook canned corned beef then check out some of these popular methods below:

Using the oven to cook a one-pot beef hash is a great way to enjoy this dish without doing much. To make it, follow the instructions below:

Additionally, you can also add a layer of cheese on top of the beef and potatoes. If you really want a hearty meal, crack in 2 eggs on top of the potatoes and beef and lightly salt the eggs before you put the pot in the oven.

Using a skillet to cook canned corned beef hash is the classic way to go and will provide the most flavor.

The recipe that we described above is perfect for cooking in a skillet.

If you want an even bigger flavor kick, a great pro tip would be to first cook the potatoes with just a bit of seasoning in the skillet before mixing it with the beef and other ingredients.

This will give the potatoes some crispiness, improve their texture, and will enhance the overall flavor of the recipe as well.

Furthermore, if you are going to make canned corned beef hash in a skillet, then we highly recommend that you also cook garlic rice on the side.

Rice and beef hash are a match made in heaven. Trust us, you don’t want to miss out on this amazing side dish.

Microwaving beef hash won’t give you the same flavor that you can get from a skillet or an oven but it will get the job done. This trick is used by many college students who don’t have the time or the equipment to whip up a proper meal.

To make microwaved beef hash, simply empty the container in a microwave-safe bowl and mix in all the above ingredients.

You can also add a layer of cheese if you’d like. Set the microwave to its highest setting and cook for about 3-5 minutes.

You can manually rotate the bowl every 2 minutes if your microwave does not have a rotating bottom plate. This will allow the beef hash to cook from all sides.

When the potatoes have been properly cooked, remove them from the microwave, garnish and serve hot.

Once you have cooked corned beef, you will need to store it and treat it exactly how you would store other foods.

The best way to preserve beef hash for the short term would be to put it in an airtight container (such as this one) in the fridge.

You can also store this dish for the long term by freezing it in an air-tight container.

Refrigerated canned corned beef hash can stay good for about 2-3 days if it is kept properly while frozen beef hash can be stored for 2-3 months.

To heat refrigerated corned beef hash, simply warm it in a microwave or you can also use a skillet to lightly fry it again, however, we wouldn’t recommend this as it may overcook the vegetables and dry out the beef even more.

Heating frozen beef hash is also easy! Simply thaw the container in the fridge overnight or use a microwave to thaw it. Once the food has defrosted, you can simply warm it in a microwave at its highest setting.

Please note that an opened can of corned beef must be kept refrigerated or frozen since it will be exposed to the open air.

You may follow the instructions mentioned at the back of the packaging for more storage information.

Many people prefer to use the entire can of corned beef at once but for people who like to portion their meals, it would be wise to carefully divide the beef into two parts and refrigerate or freeze the remainder corned beef.

Now that we’ve gone over how to cook canned corned beef hash, let’s take a look at a few related questions on the subject!

Can I add vegetables to corned beef hash?

Yes, you can add several vegetables to the classic beef hash recipe. Some great additions would be carrots, bell peppers, and herbs.

The great thing about this dish is that it goes well with every type of vegetable, and not just potatoes.

Yes, canned beef hash is usually cooked before it is packaged. Manufacturers will cook the beef as per the specifications to kill off any bacteria.

They will also flavor the meat using condiments and specialized food-grade substances.

Beef hash can also be smoked before it is packaged. Once prepared, the meat will be preserved using different curing methods which will give it a long shelf life. All you would then have to do is open up the packaging and start cooking.

Once the meat is out of the can, you will need to cook it as soon as possible.

Exposure to air and moisture can compromise the quality of the meat and may also make it unsafe for consumption if kept out at room temperature for more than 3-5 hours.

Once cooked, simply store the cooked dish in either the refrigerator (for 1-3 days) or the freezer (1-2 months).

Edamame Vs Mukimame – What’s The Difference?