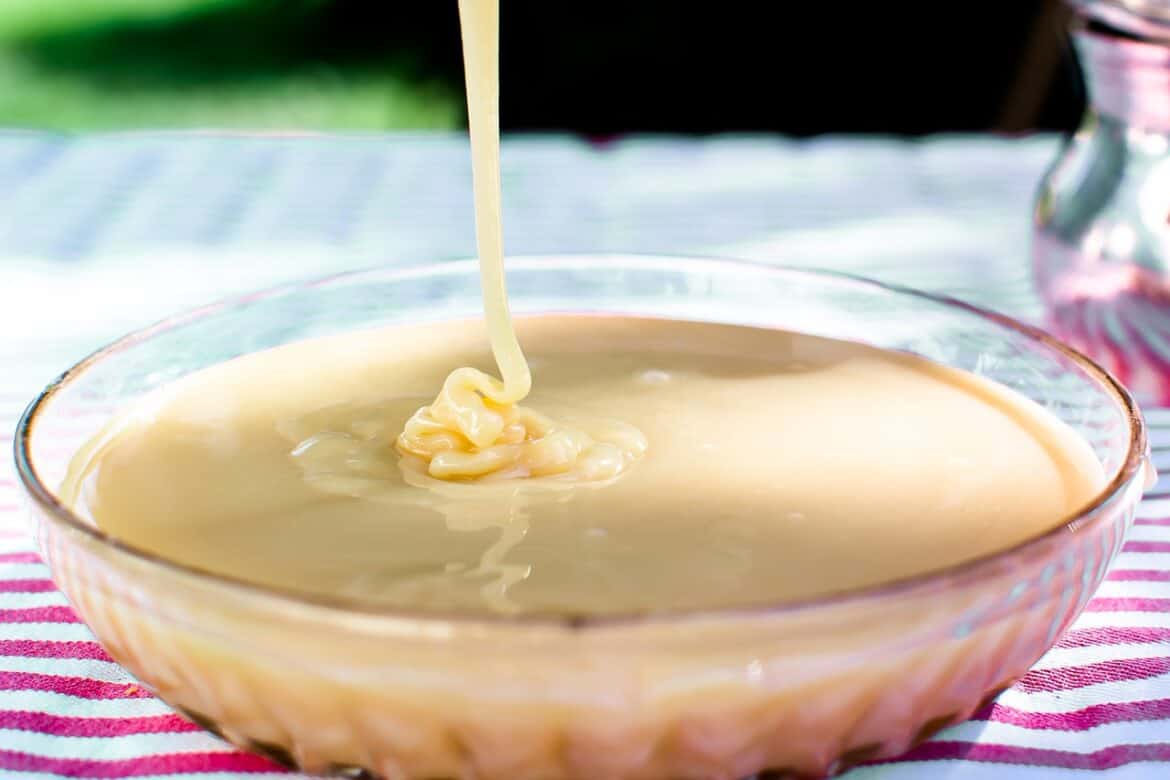 Condensed milk and heavy cream are both dense dairy products that have somewhat similar characteristics. However, they are not interchangeable at all — they are very different in consistency, flavor, and function.

But what is the actual difference between condensed milk and heavy cream? Condensed milk contains a lot less water and a ton more sugar. Heavy cream is an unsweetened, heavy-fat by-product of unhomogenized milk. Condensed milk has a thick, syrup-like consistency, while heavy cream is just a thick form of milk. The two perform different functions in baking and cooking.

Today, we dive deep into the similarities and differences between these two ingredients. This will help you better understand how and why a specific one is used and when they are best used.

It will also help you choose the best alternatives if you need to swap them out!

What Is Condensed Milk?

Condensed milk is a unique dairy product made from cow’s milk. There are very few dairy alternatives used for this product. But, it is possible to get plant-based condensed milk options too.

This ingredient is essentially (as the name suggests) a condensed form of regular milk. Most of the water from the milk has been removed (usually around 60%) to create a very thick dairy concentrate.

It is also heavily sweetened and then sold as SCM (sweetened condensed milk). On average, condensed milk contains about 45% sugar. This helps give the ingredients their thick, shiny, gooey consistency.

Condensed milk is sold in cans, which helps preserve this perishable ingredient. What also helps extend the shelf life is the high concentration of sugar and lack of water. All-in-all, when unopened, this product can last for years!

Both of these ingredients have about 60% of their water removed. This creates a thick, gooey liquid.

The process of making condensed milk is fairly straightforward. You can even make it at home!

The basics of the process are that the milk is first pasteurized by heating the milk to 185–194°F (85–90°C). Then, most of the water is evaporated to create a super thick and dense liquid. The exact percentage depends on the manufacturer.

Finally, about 9 parts sugar to every 11 parts dense evaporated milk liquid is combined. The sugar is melted into the liquid, which then forms the emulsion we know as condensed milk.

The final step in the process is canning, which as we’ve mentioned, helps preserve and extend the shelf life.

Condensed milk should have a silky smooth texture. It should not be gritty or sandy in any way — this is an indication that some sugars have crystallized. You can melt the grittiness away, but the condensed milk cannot be used “fresh.”

This ingredient has a very thick, sticky, syrup-like consistency that is glossy in appearance. It also has a slightly yellowish, cream-like color.

And finally, it’s a liquid that can change consistency based on the temperature you use it at, much like regular syrups. When heated, it becomes runnier and easier to incorporate into batters and dough.

And, if it cools down, it helps act as a binding ingredient. It can be frozen in ice creams, sorbets, or puddings.

Condensed milk is by no means a healthy ingredient — it’s not even very nutritious.

Every tablespoon (15ml) of condensed milk contains about 55-60 calories and 7.6 grams of carbs. It’s also high in fat and protein, averaging around 1.2 grams each per tablespoon.

This dairy product also contains calcium, phosphorus, selenium, choline, and vitamins B2 and B12. But again, the number of sugars and fats alone outweighs any other nutritional benefit condensed milk could have provided.

This is an incredibly functional ingredient. Naturally, it adds sweetness to your recipes.

But, it also functions as a tenderizing ingredient that adds moisture. And, the high amounts of sugar in the product helps give the dish a golden-brown color when the sugars caramelize during cooking or baking.

And depending on what you are making, condensed milk can be a binding or emulsifying ingredient too.

What Is Heavy Cream?

Heavy cream is a unique form of regular cream with a butterfat percentage. The exact percentage mainly depends on where the cream is from. Many countries have different rules for this, but we’ll get into that a little later.

Cream is also a dairy product made from cow’s milk. It’s the high-fat layer that forms on top of milk before it undergoes homogenization.

You do get some plant-based creams (like coconut cream), but they aren’t made in the same way and they also don’t function entirely the same.

All types of cream have a slightly off-white color. Cream has a thicker consistency than milk, but doesn’t have a syrup-like or condensed consistency. Naturally, that also means that it’s not sticky or gooey in any way.

What Exactly Is Heavy Cream?

Heavy cream goes by many different names. And as we’ve mentioned, the exact consistency and butterfat percentage vary from country to country.

In Canada, heavy cream has to contain at least 36% milk fat. It is sometimes labeled as “whipping cream,” which can be a bit misleading. Whipping cream, by law, can contain between 33–36% milk fats. So, always check the percentage.

In Russia, heavy cream contains between 35–58% butterfat. And they are often labeled as whipping cream or double cream.

In the United Kingdom, you will find it marketed as “extra-thick double cream” or simply “double cream.” This form contains around 48% milk fat.

And finally, in the United States, heavy cream is any cream containing more than 36% milk fats.

If you are in a country that doesn’t use these terms, always check the fat content on the package — most countries legally have to display it.

It depends on manufacturer to manufacturer. Some heavy cream products are made by hand, while others are made using special equipment to mass produce the liquid.

If heavy cream is made industrially, machines called separators are used. They help unhomogenized milk separate from the fat, which then rises to the top. The fat is scooped up, leaving behind skimmed milk (which is sold separately).

The cream is then further processed. Some producers add vitamins, minerals, stabilizers, preservatives, and even sweeteners. So, if you don’t want any of this, always check your packaging.

Heavy cream has a slightly off-white color. It has a thicker consistency than milk and water, but is still a very runny liquid ingredient.

It has a rich fatty flavor, but still very much tastes like dairy. It’s unsweetened, but you can pick up on the naturally sweet flavors of the milk.

You would think that heavy cream doesn’t contain that many calories because it isn’t sweetened. However, because it has such a high amount of milk fats, the calorie count instantly shoots up.

A single tablespoon of heavy cream contains around 50–54 calories. It’s obviously very high in fat; it measures around 5 grams of fat in total (mostly made up of saturated fats).

Heavy cream also contains some sodium, vitamin A, D, E, K, calcium, and phosphorus. But, like all high sugar and fat ingredients, these nutrients don’t matter much if the overall product isn’t as healthy.

It’s like chocolate. Dark chocolate itself is very healthy, but the fats make it an ingredient you have to consume in moderation.

Heavy cream has an endless amount of uses. It helps enriches recipes while adding a ton of moisture. It can add a bit of color to baked items when the sugars caramelize.

Plus, it is a fantastic ingredient that can help bind others together. It adds tenderness, creaminess, and an overall softer texture to any item.

So, let’s compare the characteristics of condensed milk and heavy cream side-by-side. This way, it will be much easier to instantly compare certain qualities.

First off, condensed milk and heavy cream are made in two entirely different ways. Heavy cream is a lot less processed and doesn’t contain any added sugars (or at least, shouldn’t).

Condensed milk also contains a lot less water, which makes it a much thicker, creamier, and more syrup-like liquid. The added sugar also helps give it a unique gooey consistency.

In terms of color, because condensed milk is a lot more concentrated in fat, it has a yellowish color. Heavy cream, on the other hand, is mostly dairy and has a slightly off-white to white color.

Naturally, condensed milk has a very sweet flavor and you cannot pick up a ton of milk undertones. And heavy cream, on the other hand, has very prominent milk flavors and isn’t nearly as sweet.

Condensed milk is a very shelf-stable dairy product that can last at room temperature for years. However, heavy cream is very fresh and will only last a few days once it has been opened — especially if you’re working with fresh cream.

Then, if you compare the nutrition of both these dairy products, they pretty much come to the same results. Heavy cream is slightly lower in calories, but because of its high-fat concentration, it evens out.

Both contain generous amounts of protein and carbs, and both are high in fat. Their vitamin composition is also very similar. But, heavy cream is more nutritious because it’s less processed.

And finally, when it comes to the uses of these two products, they are very different.

Heavy cream is a liquid and can be used as such. Where it is more functional than condensed milk is that it can add a lot more moisture to the recipe.

The only thing condensed milk can do that heavy cream cannot is to add a syrupy consistency and add a ton of sweetness.

For our more visual learners, here is a comparison chart to really break it down: