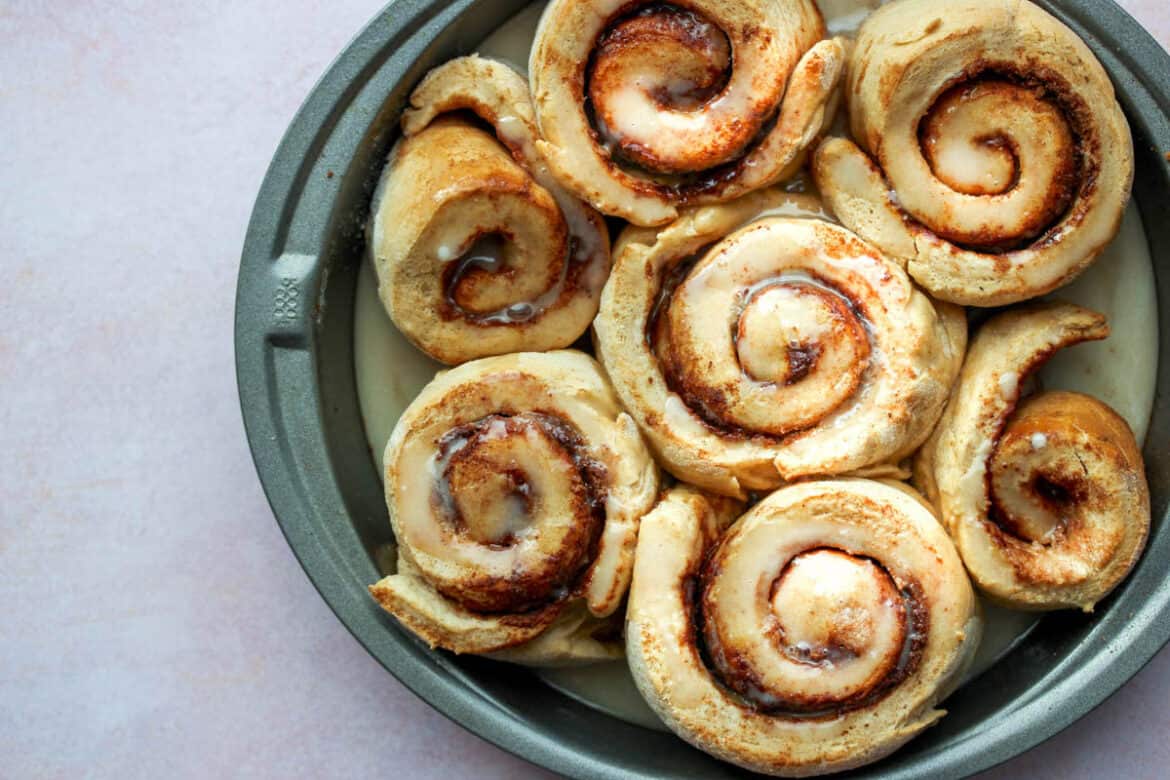 Cinnamon rolls always feel like a treat. There’s just something celebratory about biting into a fluffy, cinnamon-swirled pastry with a sticky-sweet icing dripping down the sides.

They’re a perfect breakfast for holidays, as they always fill the house with waves of warming spice and the hint of a sweet surprise in the oven.

While there are many different names for swirled pastries like cinnamon rolls, including sticky buns, pecan rolls, and cinnamon buns, this recipe is for the classic treat.

There are no nuts, just plenty of cinnamon wrapped into a homemade brioche-like dough and drizzled with bright white glaze.

There are three components to this recipe: the dough, the filling, and a quick glaze. While you don’t necessarily need the glaze, it’s highly recommended.

The dough itself is a rich yeasted dough. That means that it includes butter for flavor, velvety texture, and tenderness, as well as yeast for the signature puffiness you expect in a well-made cinnamon roll.

What’s different about this cinnamon roll recipe, however, is that there is no brown sugar in the dough, filling, or icing.

While most cinnamon roll recipes call for brown sugar in both the dough and the icing, here, you’ll use plain white sugar. White sugar yields light and fluffy cinnamon rolls with just the right amount of sweetness.

Brown sugar, which gets its darker color and caramel flavor from molasses, adds density and a toasted look to most baked goods. However, by substituting white sugar for brown, you get perfectly golden, pillowy buns.

Instead of brown sugar, these cinnamon rolls get their toasted color from plenty of cinnamon. You’ll add the warming spice to both the dough and the filling. The result is a morning bun that’s packed with flavor without too much sweetness.

While there are three components to this recipe, each one is fairly straightforward. The dough comes together in a mixing bowl, with common household ingredients. You can use regular whole milk or buttermilk for tenderness.

Once the dough is mixed and before you shape your cinnamon buns, let it rest for 10 minutes in the mixing bowl. This allows the gluten (a protein in flour that causes your baked goods to be stretchy and chewy) to relax. Relaxed gluten makes it much easier to roll and shape the dough into swirled buns.

If you find that you’re struggling to get the dough to cooperate under your rolling pin, just step away and let it rest for a few minutes more.

The more you tug and roll the dough, the more the gluten will seize up, making it harder to work with. But after a few minutes rest, it should be nice and pliable again.

To shape the buns, roll the dough into a long rectangle on a floured work surface to prevent sticking.

Spread the butter, cinnamon, and sugar filling evenly over the dough, all the way up to the edges. You’ll just want to leave a small border along the very top to seal your rolls closed.

Then roll the dough into a tight spiral, starting on the long end. You should have a nice rounded log. Slice the log into even pieces, and voila: you have perfectly spiraled cinnamon rolls.

The other factor that brings fluffiness to these cinnamon rolls is the yeast. Use instant yeast for this recipe, which is fast-acting and doesn’t need activation, like other forms of yeast. As with all yeasted bread, however, this dough does need time to rise.

After you’ve shaped your buns, place them in a baking dish, leaving about 2 inches of space between each bun. Let them rise in the baking dish for at least 25 minutes in a warm spot.

If it’s a cold day, stick the buns in the oven (as long as it’s off!), which tends to be a bit warmer than your kitchen. Otherwise, you can rise the buns right on a counter, covered in a damp cloth.

Warm air encourages yeast activity, resulting in fast-rising buns. Your buns are finished rising and ready to bake when they’re puffy and airy and the distance between them has closed a bit.

At this point, transfer them to a hot oven to cook for about 25 minutes, until the buns are golden on top.

While the buns are baking, you can mix up the quick 3-ingredient icing. Simply whisk together sugar, vanilla, and a splash of milk until you have a smooth, bright white glaze that’s pourable.

When the buns come out of the oven, cover them in icing while they’re still warm. Some of the icing will melt right into the warm buns.

While you can certainly enjoy these cinnamon buns without the glaze, it’s so easy to whip up and adds a gorgeous shiny topping to your golden cinnamon buns.

Now all that’s left to do is to enjoy your masterpieces!

How To Make Cinnamon Rolls Without Brown Sugar

Step 5: Spread the dough out on a lightly floured surface

Step 9: Arrange on a pre-greased baking dish or pan

Step 11: Drizzle with icing (instructions below) and enjoy!

Grease a 9-inch round cake pan or an 8-inch baking dish.

In a mixing bowl, combine the flour, sugar, cinnamon, and salt.

In a measuring cup or microwave-safe bowl, combine the butter and milk and microwave in 30-second intervals until the butter is melted.

Pour the melted butter and milk into the bowl with the dry ingredients, along with the yeast and egg, and mix until just combined. Mix until the dough comes together into a sticky ball. Mix for 5 minutes more.

Transfer the dough to a greased bowl and let rest for 10 minutes, covered.

On a lightly floured work surface, roll the dough out into a 14x8-inch rectangle.

Spread with the softened butter and sprinkle with cinnamon and sugar, going all the way out to the edges.

Roll the dough up, starting on the long (14-inch) edge into a tight spiral. Pinch the ends to seal. Use a sharp serrated knife to carefully slice the roll into 7 equal pieces, about 2 inches thick.

Transfer the cinnamon rolls to the prepared pan, leaving a few inches of space between them. Cover with a dishtowel and rest for 25-30 minutes, preferably somewhere warm. Preheat the oven to 350°F.

Bake for 15-20 minutes, until golden on top and cooked through.

To make the glaze, whisk together powdered sugar, vanilla, and milk until smooth. Drizzle over the warm cinnamon rolls in the pan to catch drips.