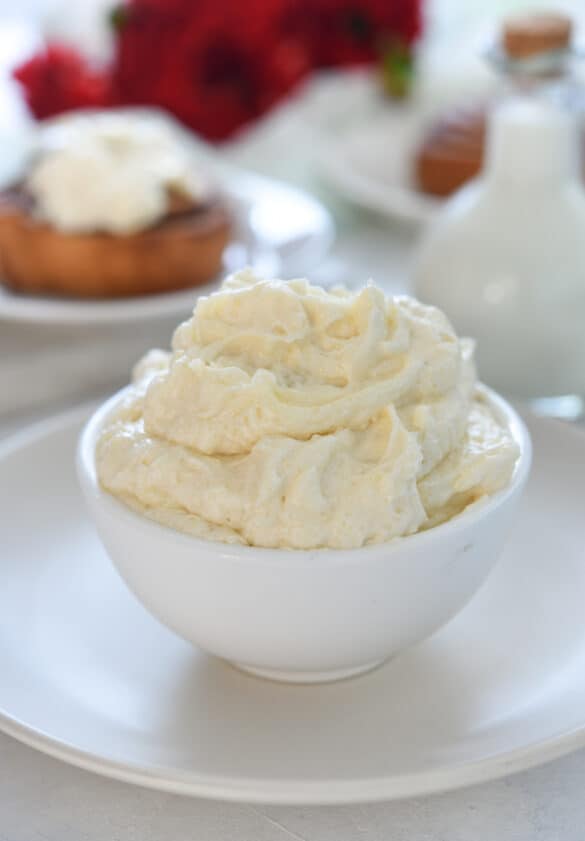 Homemade cinnamon rolls are the best thing to serve for breakfast, dessert, or a snack, but beyond the cinnamon-filled soft dough, the icing is what it all keeps together.

We can all agree cinnamon rolls are the invention of the century, but without frosting on top, it would seem that something is missing. With this recipe and only a few ingredients, there is no excuse for naked cinnamon rolls.

This cinnamon roll icing is very easy to make and super delicious to eat. You may even find out that you enjoy eating one alone, without any cinnamon rolls under it, or as a multi-use frosting for other desserts, like cakes and cookies.

There are many different cinnamon roll icings, and they are somehow all the same. Almost every single one is made with powdered sugar.

Why make icing without powdered sugar?

We usually learn to bake with granulated sugar, but when we use powdered sugar, unpleasant things may happen.

Powdered sugar generally contains cornstarch. The cornstarch is added to prevent the sugar from clumping.

There are people who are allergic to cornstarch, so it is a good idea to avoid powdered sugar when serving a crowd.

So, when making icings with the powdered sugar, keep in mind that it has cornstarch inside. This is very important for those who are gluten-intolerant, as you do not know if the pure cornstarch is used.

How do you make cinnamon roll icing without powdered sugar?

This is a recipe that requires a bit of cooking. Nothing too much, but the use of a stove is a must. The recipe itself is very forgiving and you cannot go wrong.

You will combine cold milk and flour in saucepot. Once the mixture simmer, start to whisk it and cook until it is nice smooth and thick.

Remove the mixture from the heat and add vanilla. Stir gently and place aside. The mixture must be cold as it will be combined with butter.

If you add the warm flour mixture, the butter may melt which will result in butter separating from the flour mixture. In the end, you will just ruin what you already made.

Once the flour is cooked, beat the butter and sugar. You need to beat until you have fluffy and pale butter. The pale color indicates you have done it right and the sugar is dissolved in the butter.

Gradually add in the flour mixture, beating well after each addition. Make sure you are beating with an electric mixer at medium speed. If you do it on high lumps may form as you really need to do this detailed.

The prepared frosting will be fluffy and ready to use. If you want to store it, it will keep up to a week in a fridge. Just, make sure to cover it as the crust may form.

Now, you may be wondering if you can make a thinner frosting.

The answer is yes, you can. If you want a thinner frosting, just add more milk. I would increase milk by three tablespoons. This will be enough for a nice pourable frosting. Or, you can simply reduce half the flour.

As mentioned, this frosting goes beyond the cinnamon rolls. Use it for cakes, cookies, and muffins.

A special note: This recipe or frosting will be thicker than the one made with powdered sugar. It is just a matter of taste, but to me, this one is even better.

This icing is more like whipped, creamy butter. It is less sweet and I love it! It would go perfectly with my Cinnamon Rolls Without Brown Sugar Recipe.

The beauty of this recipe is that you can make it in 15 minutes. This is a recipe that uses ingredients you already have somewhere in your pantry.

In a saucepot, whisk milk and flour.

Cook the mixture over medium heat until the flour is cooked and you have a nice thick mixture.

Remove the flour mixture from the heat and place aside to cool down.

In a bowl, beat butter and sugar until creamy.

Beat everything together until you have fluffy and creamy frosting.

wow! did not expect this to be good because of the process, but this recipe is the best and you cant even feel the sugar granules!