Home Foodsguy Chicken Korma Vs Butter Chicken – What’s The Difference?
FoodsguyThis vs That 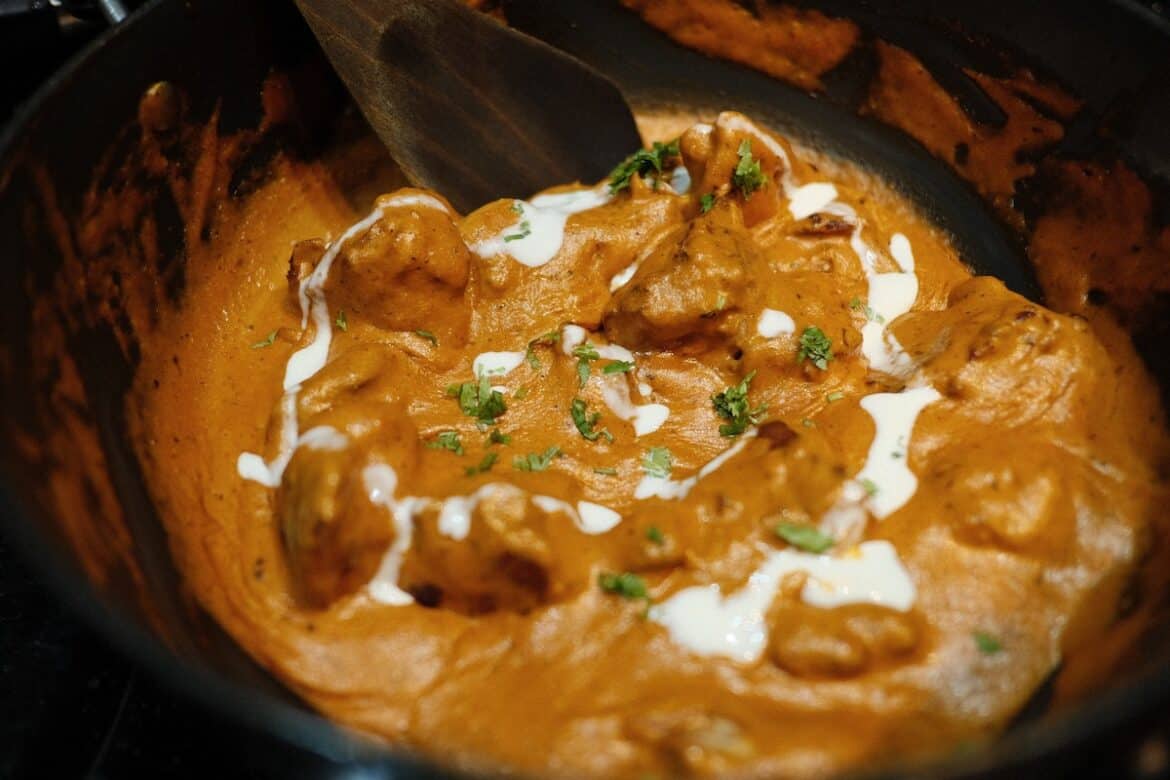 Butter chicken and chicken korma are hugely iconic dishes in Asia but have also found a home in many other parts of the world too.

While they are widely consumed in many desi restaurants, people from other regions can get confused between the two—which is understandable since both dishes use the same type of spices or “garam masala”.

What is the difference between chicken korma vs butter chicken? Butter chicken is a dairy-based dish that uses heavy cream, butter, milk, and yogurt along with spices for its curry while chicken korma is more spice-based with a focus on deeply caramelized onions, ground/whole spices, and seasoned oil.

Read below to learn more about these incredibly tasty dishes and how you can easily make them at home using common ingredients!

Originating from India, butter chicken’s invention was more of an accident!

It was first made in the 1950s at a restaurant called Moti Mahal. Legend has it that this buttery dish was made by mixing leftover food to feed customers.

Chefs mixed leftover Tandoori chicken with tomato curry during a particularly busy night and ended up inventing an extremely tasty and savory dish that would henceforth be known as butter chicken.

This recipe is beloved all around the world and has even found a home in North America and Europe. What makes this dish so delicious is its right amount of sweetness, spiciness, and richness.

Butter chicken was popularized by a wave of new Indian restaurants in America and was an instant hit. Since then, there have been many variations to this iconic recipe but the taste of its gravy has largely remained the same.

Butter chicken is a mixture of garam masala (ground, roasted spices), yogurt, cream, butter, and spicy curry made with a mixture of masala, tomato paste, onions, milk, and even more cream!

When compared to chicken korma, butter chicken shares some ingredients but is entirely different in how it is cooked and of course, how it tastes.

The best way to show the difference between these two recipes would be to explain how they are made. Here is a great recipe for making butter chicken at home!

Like many Indian recipes, the full list of ingredients for this dish can be a bit intimidating since this recipe requires quite a lot of spices and herbs.

However, people find it easier to premix all the spices in a separate bag so that it can be used multiple times—this technique is called “mix masala”.

This will save time and you will only have to mix the spices in bulk once to make multiple servings of butter chicken with ease!

Korma is a mixture of roasted spices, dark caramelized onions, yogurt, and even more spices. This dish has royalty status and was once served to the elite in the Mughal Empire!

It heavily depends on a mixture of garam masala spices and whole spices. Typically, korma can be made with either chicken, beef, veal, or lamb. It can also be mixed with vegetables and can be prepared with bone broth as well.

Korma is equally famous around the world, especially in Asia, and is known for its spectacular aroma owing to the mixture of roasted cumin and coriander.

Korma has a thick gravy with a thin layer of oil that floats on top of the masala. The gravy of this recipe can be considered to be grainy, rich, and spicy.

Chicken korma is relatively easier to make since it requires no prior marination and can be made by simply mixing all the ingredients in a single pot.

Here is how to make an authentic serving of chicken korma at home!

A Quick Comparison Between Butter Chicken And Chicken Korma

When comparing both recipes, you will notice that they both heavily use garam masala which is the backbone of Indian cuisine.

But the main difference between the two is in their ingredients. Butter chicken is more of a dairy-based dish with a unique sweet, spicy and buttery-rich flavor.

On the other hand, chicken korma heavily relies on spices and slightly sour yogurt to flavor the gravy. This recipe is more spicy, earthy, oily, and has a grainy gravy that goes great with any flatbread!

Here’s an easy chart to explain the differences between these iconic dishes:

Chicken korma and butter chicken are hugely popular recipes that have been served for decades – or centuries in the case of korma! Now that you know the difference between the two, here are a few related questions:

Yes. If you compare the calories of both dishes then chicken korma will be considered to be the healthier option of the two since it does not include heavy cream or large quantities of butter.

For example, a single serving of chicken korma can be anywhere from 300-400 calories while butter chicken can be 500-650 calories per serving.

Can you use low-fat dairy to make butter chicken?

Yes, you can use low-fat dairy products to make butter chicken but it may negatively affect the taste of this delicious dish.

Traditionally, butter chicken is supposed to be made with fresh dairy products.

However, restaurants may also serve a low-calorie version of the dish by focusing more on increasing the flavor of the ingredients by using umami seasonings to make up for the low-fat alternatives.

Up Next: How Much Water Per Tea Bag?

How Much Water Per Tea Bag?