Home Cooking Tips Can You Freeze Goulash?
Cooking TipsFoodsguyFreezingHow To 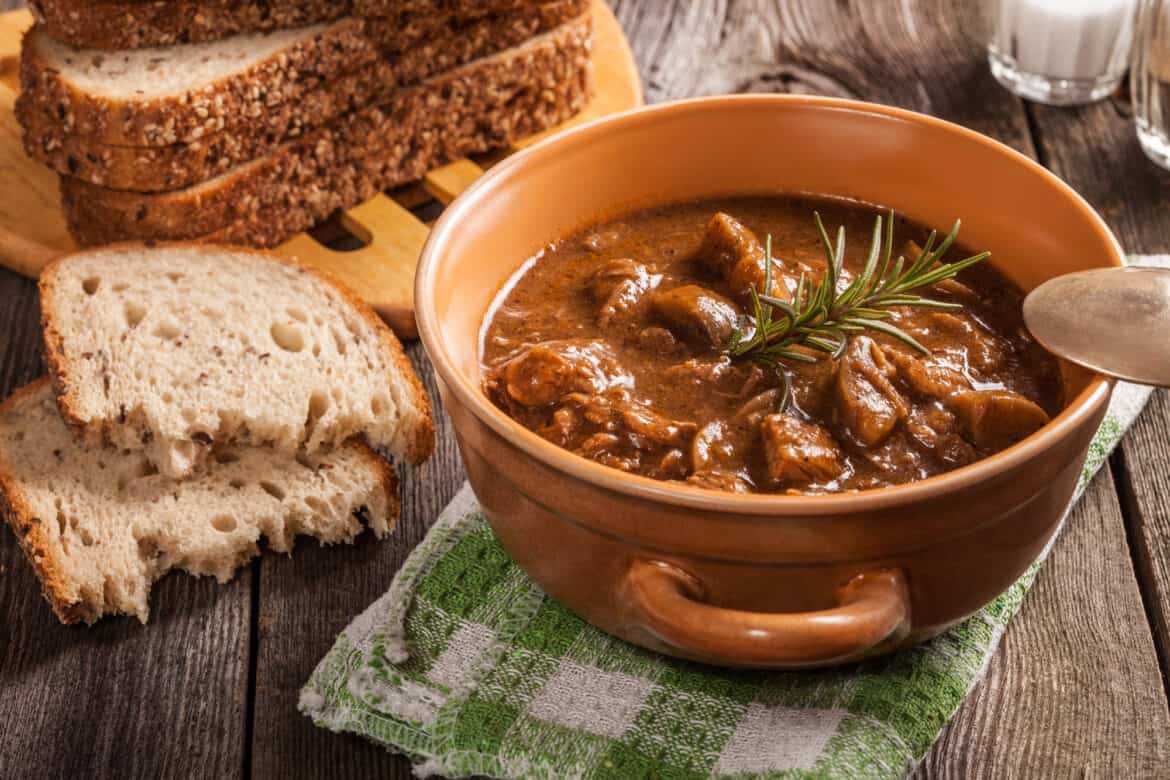 Goulash is the ideal meal to make on a cold winter evening, and it is great for when you want to cook a big batch and keep a few portions aside for a later stage.

When you cook more goulash than you need, or if you have some leftovers and are looking for the best way to keep it fresh for longer, you might consider freezing it.

Can you freeze goulash? You can freeze goulash — it is actually a dish that freezes really well! You do need to prepare the goulash for freezing in order to ensure it keeps its best quality while frozen. Freezing goulash is a great way to keep it fresher for longer and prevent it from going off.

Read on to learn more on how to freeze goulash and some handy tips on freezing it properly to keep it in the best quality.

Is It Okay To Freeze Goulash?

It is fine to freeze goulash — goulash generally holds up well when frozen, thawed, and reheated.

Goulash is one of those dishes where it is really easy to make more than you can eat in one or two sittings, so you will likely have leftovers that need to be kept fresher for longer.

It is also a great dish to make extra for the purpose of freezing, so you have a quick and easy dinner waiting in the freezer for when you don’t feel like cooking.

If the goulash is prepared and stored properly, it is perfectly fine to freeze.

How To Freeze Goulash

Freezing goulash is a fairly simple process, but you do need to make sure that you do it properly to keep the goulash protected in the freezer, and to keep it in the best quality.

Before you freeze the goulash, you need to consider the portion sizes you want to freeze it in.

If there is enough goulash for a family dinner, then you can freeze it all as one. However, if you want smaller single-serving portions, you can freeze it this way, so you can enjoy a small amount without having to defrost the whole lot.

Here is how to properly freeze goulash:

It is vital to ensure that the goulash is kept in an airtight container so that the odor does not travel to other food in the freezer, and so that other odors do not move into the goulash container.

An airtight seal will also help to prevent freezer burn from developing, which helps to keep the goulash in better condition for longer.

There are a few tips and tricks to keep in mind when freezing goulash so that it tastes as good as possible when thawed and reheated again:

Does Frozen Goulash Taste The Same?

You might be worried that freezing goulash, and then thawing it, might cause it to taste different and not as great as it does fresh — however, goulash is one of the meals that actually freezes really well.

The taste and texture of goulash are not affected very much when frozen, and it should be just as good as it was fresh. However, there are two things to be wary of when freezing goulash.

The first is that the goulash might dry out slightly when it is frozen, so you could add in some extra liquid before freezing, or when reheating, to make up for this.

The other issue is that the potatoes might become slightly soft and grainy when frozen, but it should not be too big of an issue and it shouldn’t be too noticeable.

How Long Can Goulash Be Frozen For?

It helps to know how long goulash can be frozen so that you can eat it before it begins to decline in quality too much.

Goulash is fine to be kept in the freezer for up to 3 months, and within 3 months is when the goulash will keep its best taste and texture.

The goulash will still be fine to eat after 3 months, but it might become bland and the texture might begin to change, due to an increase in freezer burn.

Labeling the container of goulash with the date of freezing really helps to keep track of when it needs to be consumed by.

The Best Way To Thaw Goulash

Goulash can take some time to thaw, but it is best to thaw it slowly and at a cooler temperature. For this reason, it is best to defrost goulash by leaving it in the fridge overnight, or for a few hours.

This allows it to thaw at a lower temperature so that it is not put at risk of bacteria growth. However, it does take some planning ahead of time, and you will need to give the goulash a good few hours to defrost before reheating it.

If you don’t have the time to wait, you could place the goulash in a microwave-safe container and set the microwave on the defrost setting. This should help to defrost the goulash quickly, but it might dry it out slightly.

The Best Way To Reheat Goulash

You can reheat the goulash in the microwave, which will be the quickest option, or you can reheat it on the stovetop.

How to reheat goulash in the microwave:

How to reheat goulash on the stovetop:

The goulash should be piping hot after reheating, so make sure to stir it properly as it reheats so all of it is hot.

You might need to add some water or chicken broth to the goulash when you reheat it, just to give it more moisture and to prevent it from drying out as it warms up.

Can You Refreeze Goulash?

It is not recommended that you refreeze goulash as it will decline in quality too much if frozen, thawed, and then frozen again. It is also not safe as it puts the goulash at risk of bacteria growth, with the changes in temperature.

It is best to freeze the goulash in portions, and only thaw what you are going to use. Once thawed, goulash can be kept in the fridge for two days, but it should not be placed back in the fridge once reheated.

Goulash is a great meal to make a double batch of or to keep for leftovers since it freezes very well — frozen goulash makes for a quick and easy dinner or lunch.

Goulash can be frozen for up to 3 months, and it is advised to freeze it in suitable portion sizes, so you only need to thaw as much goulash as you will need for one meal, so none goes to waste.

Now that we’ve learned all about goulash, plus whether it can be frozen and how to do so, here are some additional questions that we thought you might have.

How long does goulash last in the fridge?

Goulash can be kept in the fridge for up to 4 days as long as it is kept in an airtight container.

Can you reheat goulash twice?

It is not a good idea to reheat goulash twice — this increases the chance of bacteria growth due to the rapid changes in temperature.

Does goulash taste better the next day?

Many consider goulash to taste better the next day, as with many other soups (ex. chili), since the flavors have had time to develop and become more seasoned.

Can You Freeze Marinated Meat?

Can You Freeze Matzo Balls?