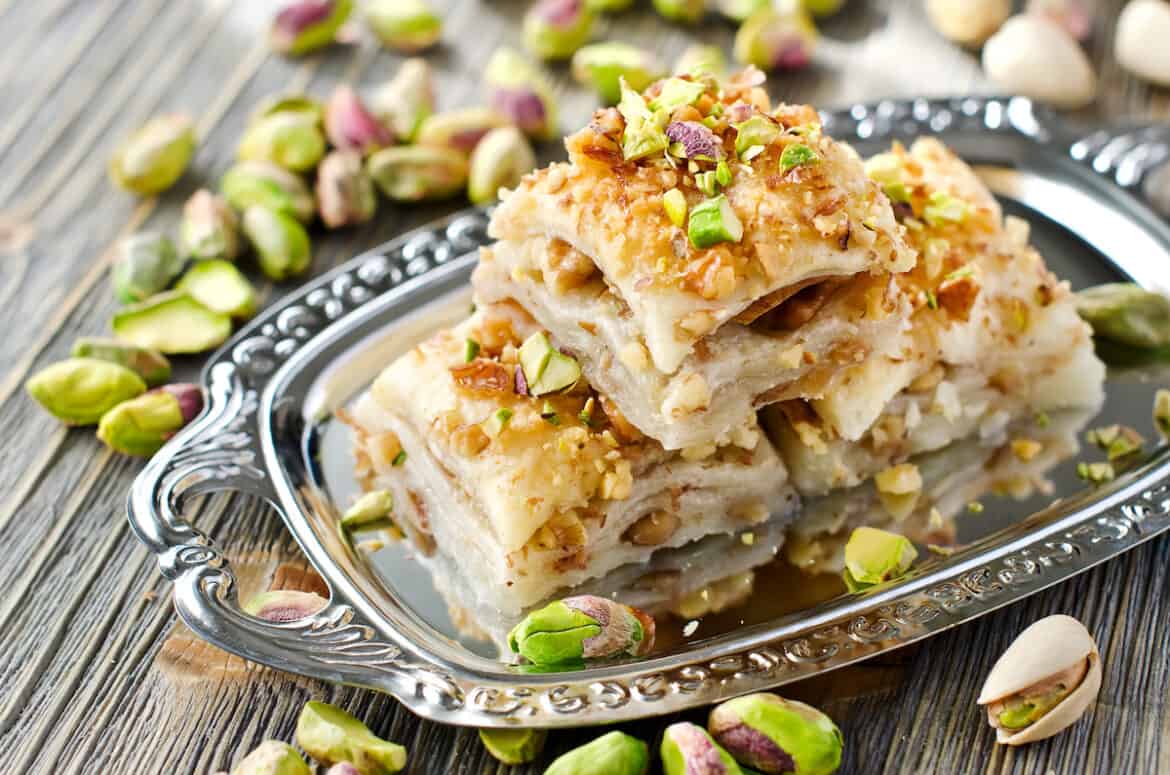 One of the positives of globalization is that regional cuisine is no longer focused on a particular part of the world. Instead, we can now experience traditional cuisine from around the world in our local restaurants.

Who would have known 100 years ago that some of the lesser-known countries in the Balkans and the Middle East have such a rich assortment of traditional desserts? Take baklava, for example.

This curious desert that is nowadays highly-demanded in the Western world has a history that spans over a millennium back in time but remains an enigma to most people today.

If you are here, perhaps you tried baklava somewhere and you fell in love? Now you want to try and prepare it at home but you have an important question that needs to be answered.

So, can you freeze baklava? The quick answer is yes, you can freeze baklava, but you need to follow several steps to freeze it properly. The freezing method changes depending on whether the baklava is baked or unbaked.

Below, you will find our in-depth guide to freezing baklava as well as the perfect recipe to try at home.

Can You Freeze Baklava?

Although the preparation of baklava will definitely make you sweat and you may need some experience before you nail it, it is surprisingly durable and yes, you can freeze it! In fact, you can either freeze it baked or unbaked.

Not only can you freeze it but you can also store it in or out of your fridge for more than two weeks! This way, even if you make a large batch, you do not really need to freeze it if you plan to eat it in the following days.

Because baklava has a lot more moistness than your usual dessert, it has a prolonged shelf life. You will know when it is unfit to eat it by the way it looks.

If it begins to dry too much, it is time to either eat it one last time or throw it away.

How to Freeze Unbaked Baklava

From here, you need to throw the pan in the freezer for a few hours without sealing it or putting anything on top. Once the baklava is completely frozen, take it out.

Now, you have several options to choose from. In each case, you need to take the baklava out of the pan as step one.

Option 1: Your first option is to wrap it entirely with at least four layers of foil or plastic wrap. If you choose this simpler method, you will then return your baklava to the pan and place it back in the freezer.

Option 2: As an alternative and perhaps the safer option, you can place it in an airtight container or a freezer bag. If you are using a container, it will take longer to prepare but it will keep it safe and fresh.

If you use this method, you should separate each layer of the baklava and wrap it separately in either foil or paper before putting it in the container.

Either way, you can keep the baklava in the freezer for up to 5 months which is rather impressive.

Once you want to finally bake it, you have to start by thawing it in the refrigerator for a few hours. If you can, leave it overnight.

How to Freeze Baked Baklava

The process of freezing baked baklava is nearly identical.

Once it is ready, you need to take it out of the oven and leave it to rest until it cools down to room temperature.

To freeze it, you will need freezer bags or small airtight containers. Of course, you can freeze the entire batch altogether but it is not the most practical decision.

Instead, we suggest dividing the baklava into portions before freezing them in separate containers or freezer bags. This way, you can unfreeze it over time and eat it portion by portion instead of unfreezing the entire batch.

Once again, you will have to wrap it thoroughly with at least four layers of parchment paper or heavy-duty foil before you put it in the containers.

Even when it is baked, you can store it in the freezer for more than three months.

How to Thaw and Reheat Frozen Baklava

Whenever you want a treat, take out one of the divided portions of baklava from your freezer and move it to the refrigerator.

The thawing process should be followed as explained below if you want to enjoy baklava with taste and texture as if it was just baked.

With this said, start by thawing your frozen baklava in the refrigerator. If you can, leave it overnight or at least for a few hours.

As long as it is thawed to refrigerator temperature, you can decide whether you want to eat it cold or not. Some people prefer it this way but generally, it should be served at room temperature in the way people do it on the Balkans and the Middle East.

With this said, we strongly suggest that you then thaw the baklava a second time out of the fridge. If you are too impatient, you can get on it as soon as it has lost some of its coldness. However, we recommend waiting for at least a couple of hours before eating it.

Last but not least, there are also people that prefer their baklava warm. It is uncommon but you can also reheat it in the oven and risk drying it too much. You can prevent that by putting the oven on low heat.

After all, you simply want to reheat it and not bake it a second time.  One last thing, do not forget to get it to room temperature before you put it in the oven.

Where does baklava come from?

Somehow, the history of Middle Eastern cuisines is often shrouded and unanswered. It could possibly be because this region was in a constant transition period until the middle of the 20th century.

Therefore, numerous countries continue to fight over the creation of certain dishes like baklava.

For now, it is widely accepted that baklava originated from the Ottoman Empire which existed between the 14th and 20th centuries. However, there is certain evidence that this desert already existed in the 8th century in the Arab world and even all the way in Mongolia.

There is also evidence that a strikingly similar desert existed all the way back in the 2nd century in the Roman Empire and Ancient Greece. It is no wonder why the Greeks continue to believe that they are the originators of this wonderful dessert.

All in all, we can say that the place of origin is somewhere in the region. Where and when exactly will obviously remain a mystery.

Can you eat baklava warm?

In general, you can eat baklava in absolutely every way. You can eat it cold directly from the fridge just as you can also reheat it and eat it warm.

Normally, baklava is served at room temperature. It is widely accepted that baklava tastes the best when you give it some time to breathe and reach optimal temperature.

However, if you want to eat your baklava warm, you should be careful when you reheat it.

Never put it in an oven with high temperature if you do not want it to dry out and lose its taste and texture. Make sure to put to keep the heat low and take it out as soon as it has warmed up.

How long does baklava stay fresh?

Freezing is not necessary when it comes to baklava. This is because the shelf-life of this dessert is much longer than you would need to eat it entirely – up to 2 weeks.

In other words, you can either keep it in the fridge or in the pantry.

Logically speaking, you should consider what season it is and what temperature you keep your house at before you decide to keep it in your pantry instead of the fridge.

While it can stay fresh for two weeks, if you are in the middle of the summer season, you cannot expect it to keep for so long without AC. In this case, it is best to throw it in the fridge if you want it to last longer.

How to keep baklava crispy?

Like with many other desserts, it all depends on how you store it. If you want it to remain crispy, you should leave it out of the refrigerator.

This shouldn’t worry you as you already know about its prolonged shelf-life. Whether you keep it in the refrigerator or outside, make sure to always keep it in an airtight container.

What happens to baklava if you store it in the fridge and will it remain crispy? As long as you have prepared it properly, it should retain some of its crispiness.

However, expect it to become chewier and harder which is the common result of storing desserts in the fridge.

Up Next: How To Store Jalebi (So It Stays Fresh)

Can You Freeze Moussaka? – The Best Way

Can You Freeze American Cheese?