Home Cooking Tips Cabernet Vs Shiraz — What’s The Difference?
Cooking TipsFoodsguyPairingsThis vs That

Cabernet Vs Shiraz — What’s The Difference? 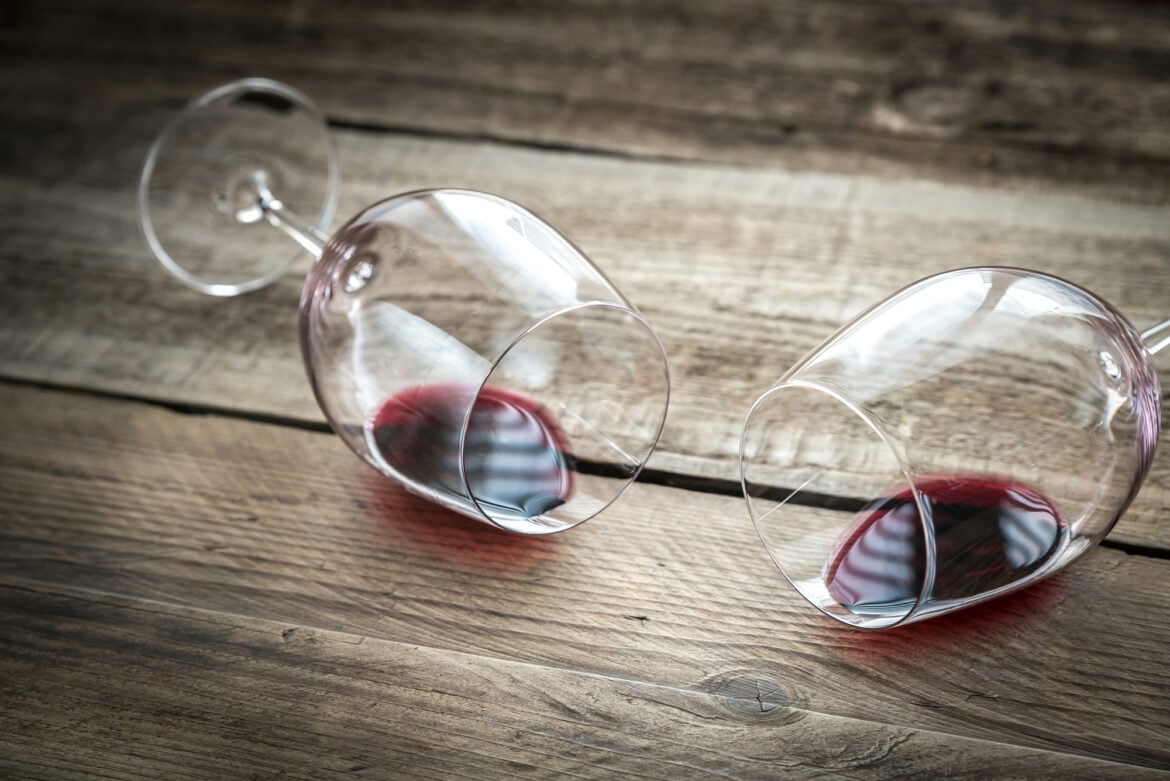 Knowing which wine is which can be challenging. We used to just grab whatever looked good! We couldn’t figure out which wines we liked, why we liked their flavor, how to use them, and how to pair them.

Once we started diving into the differences, we figured out how amazing wine can be. So, we thought it’s high time we cover the difference between Cabernet and Shiraz, two of the world’s most popular red wines!

So, what exactly is the difference between Shiraz and Cabernet? Both are full-bodied red wines with very similar characteristics. However, Shiraz is heavier, more complex in flavor, darker in color, and arguably more flavorful than Cabernet.

Today, we look at the exact differences between these two wines — that includes breaking down their aroma, flavor, structure, and even grape types.

All of this will help you better understand how they differ and how you can pair these wonderful wines with different meals and ingredients!

Cabernet, more commonly known as Cabernet Sauvignon, is arguably the most famous type of grape globally! Many even claim that this red grape is the most used option because of its versatility.

Cabernet is grown in nearly every grape-growing region and is an extremely adaptable vine. That is also what makes its flavor so diverse!

The soil, climate, growing technique, and harvest period are only a few key factors that influence the final flavor produced by Cabernet grapes.

The most common areas this wine is produced in are France, Chile, the United States, South Africa, Australia, and Italy.

The Cabernet grape (or berry) itself is relatively small and spherical. Its skin color is blackish-blue and thick in comparison to many other varietals.

Another thing that makes it unique is that it is a cross between Sauvignon Blanc grapes and Cabernet Franc grapes.

Naturally, as the wine is oaked, the flavor and mouthfeel change as well. You can also expect an ABV (alcohol by volume) percentage between 13 and 15.

Cabernet Sauvignon is a full-bodied wine. That means the wine leaves a very thick and viscous feeling in your mouth. The high alcohol content is one of the contributing factors.

Other factors that make it fuller-bodied are the high tannins, the higher sugar content, and the aging process.

Aged Cabernet wines are always much heavier than young ones. So, a 1-year wine will be a lot easier to drink than a 15-year one. However, the flavor will also be less complex.

Cabernet wines have a range of colors. Usually, it is a darker ruby red color. However, as the wine ages, it loses that redness and becomes paler and light.

The longer the grapes are in contact with the skins, the darker the color will be. Some wines do disclose that information, but not all.

Aroma (Aka Nose) And Flavor

And finally, if not the most important element of any wine, what it tastes like! As we have mentioned before, different regions will produce wines that taste different — even if they come from the same grape.

In fact, even if the grapes are harvested from the same region, their flavor will change every year. That is because of the effect that environmental factors have on the wine. But, there is a general guide for Cabernet Sauvignon wines!

As the wine ages, it develops a more woody flavor (especially oak from the oak barrels), vanilla, cloves, mushrooms, leather, and tobacco.

The flavor of most Cabernet wines will be dark fruits (like plums, blackberries, and black cherries), vanilla, cassis, licorice, and black pepper.

It also has medium acidity which makes it a moderately easy wine to drink. But of course, this depends on many factors.

Not all Cabernet Sauvignon wines have a very complex flavor, but some do. And not all of them are easy to drink, but some are. What else would you expect from a grape that is so widely cultivated and used?

Depending on where you are in the world, you might know this grape as “Syrah” instead of Shiraz.

Shiraz is a more modern name that came from grapes grown in Australia. So technically, there is a difference between Shiraz and Syrah! However, they are still extremely similar, so we’ll be discussing them as one today.

These red grapes are a lot older in comparison to Cabernet ones. The berries themselves are also big and very dark in color.

This is another berry that is one of the most commonly grown varietals in the world. The top three producing countries include France, Australia, and Spain.

Again, because of how popular this grape is and how widely it is grown, there is a wide range of flavors out there. However, Shiraz is the darkest and heaviest red wine you can find globally.

It is also exceptionally complex in flavor because of how it is aged. On average, Shiraz wines are aged at least 5-9 years. But, they can also be aged for up to 25 years! And just like Cabernet, Shiraz has an average of 13-15% ABV.

Shiraz wines are very heavy and considered to be full-bodied wines. They have moderate levels of tannin and acidity, but have quite a complex flavor.

Again, the high alcohol content (for a wine), the sugar levels, and the tannins all majorly contribute to the sensation this wine provides.

As the wine ages, naturally the flavors become more complex and the fuller the mouthfeel gets.

Shiraz or Syrah has a very dark deep red color. It isn’t translucent like many Cabernet wines. The younger wines tend to be a lot darker than the aged Shiraz because of how the color fades.

Aroma (Aka Nose) And Flavor

The flavor profile of Shiraz is generally on the darker side of things. What we mean by this is that it isn’t exceptionally light and fruity.

The aromatic notes that can be picked up immediately include black fruits and pepper. Again, as the wine ages, it gets a more woody undertone and potentially mushrooms, leather, and tobacco.

The flavor of this wine immediately makes you think of blackberries, boysenberries, or blueberries.

Some Shiraz wines have a bacon-like flavor or that of cured meats. And many people taste a smokiness as well.

As we said, Shiraz has a very complex, rich, and deep flavor profile. It may not always be complex, but it is always heavy and very flavorful.

So, What’s The Difference?

Hopefully, at this point, you’re no longer saying “It’s all red to me!” While both Shiraz (or Syrah) and Cabernet grape varietals produce red wines and have many similarities, they also have some key differences.

Cabernet and Shiraz are both full-bodied, medium tannin, and acidic wines. However, the mouthfeel, flavor, aroma, and flavor pairings of each differ.

Let’s start with the berries. Shiraz grapes are much larger than Cabernet grapes. That does make a difference in the flavor of the wine and even the way the berries are processed.

Shiraz also has a much more complex and deep flavor in general. It is darker in color and has a heavier mouthfeel.

Both Cabernet and Shiraz have black fruit notes that can be noticed on both the nose and pallet.

But, young Cabernet is much lighter and boasts green pepper, vanilla, cloves, and licorice flavors. Aged Cabernet is more earthy and has notes of leather, tobacco, and mushrooms.

Shiraz is generally an aged wine, so doesn’t have as varying a flavor profile. You mainly pick up black fruits like blackberry, blueberry, and boysenberry, but the undertones vary greatly and include meaty, smoky, earthy, and spiced flavors.

Best Ways To Use Cabernet

Cabernet, like most full-bodied wines, does best with ingredients or dishes that have a very high-fat content and super savory umami flavor.

You can also pair nuts with this wine, but preferably something earthy and woody like walnuts. This is a great way to round out a charcuterie plate!

Then, virtually all types of red meat work with some types of Cabernet. For seafood, only tuna will work effortlessly.

Some note-worthy fruits and veggies that go well with this wine are tomatoes, black cherries, and broccoli. These can serve as inspiration for dishes you can make to pair with Cabernet (i.e., make tomato pasta with black cherry pudding)!

Herbs that work well with Cabernet that you can season your food with include rosemary, lavender, and juniper berries.

And finally, some dessert flavor inspirations are coffee, chocolate, and virtually all black fruits!

Best Ways To Use Shiraz

Because of how full-bodied Shiraz wine is on its own, it works better with bolder flavors where it can stand out. This includes very fragrant (maybe even pungent) ingredients with prominent, overwhelming flavors.

Fatty foods also help break through the tannins on the wine and allow the flavors to spring forward.

Shiraz pairs well with potent cheeses such as gorgonzola, Roquefort, smoked gouda, and mature cheddar. For nuts, hazelnuts work best because of their more neutral flavor.

Again, as with most red wines, you can pair Shiraz with almost any type of red meat. For seafood, salmon works surprisingly well.

When it comes to vegetables, tomatoes and beets stand out the most because of their bold yet subtle flavors. They can hold up their own while helping enhance the flavors in the Shiraz.

For herbs, we only recommend something like sage or oregano. Both are very savory and rich in flavor.

And finally, for dessert, choose something like a rhubarb pie, currant fruit cake, or tiramisu — and don’t forget the chocolate!

Rosé Vs Moscato – What’s The Difference?

Riesling Vs Moscato — What’s The Difference?