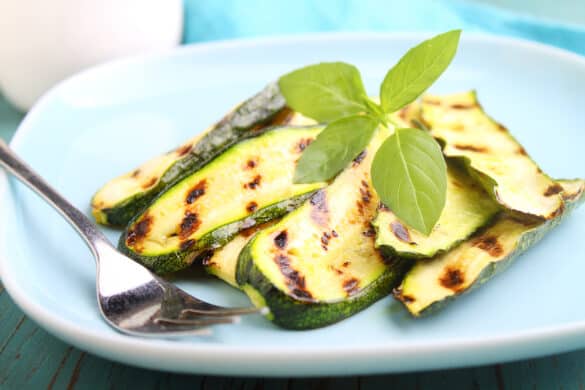 Zucchini is one of those foods that you either love or hate. But, zucchini is a part of many dishes, whether it be the original recipe or a healthier version.

This low-calorie, delicious fruit is often used as a substitute in many dishes. The reasons for it are to make it healthier, to lower the calories, or to simply make the dish vegetarian or vegan.

On the other hand, some people dislike zucchini and some people can even be allergic to it.

So, what can we replace zucchini with? The best substitutes for zucchini are those that are similar in both taste and texture, which vary according to the recipe. Common substitutes include eggplant, yellow squash, patty pan, chayote squash, or cucumbers.

So, zucchini can be replaced with ingredients like eggplant, cucumber, pumpkin, and other squash. Keep reading to find out how to substitute zucchini in the most popular dishes.

Here’s the thing. It’s hard to give a precise answer to the question of what to substitute zucchini with because there are so many different dishes that zucchini stars in.

So, we’ll list the general best options, but we’re also going to dive a little deeper into which one works best in what recipe.

Here are some of the best options when it comes to zucchini substitutes:

Below, we’ll talk about what to use in place of zucchini for a few of the most popular zucchini-heavy dishes.

How to Substitute Zucchini in Various Dishes

Nowadays we have zucchini lasagna, pizza, bread, muffins, burgers, quiche, noodles, and many more dishes that use zucchini as one of the main ingredients.

Because there are so many options, it’s always good to know how you can replace zucchini.

It’s useful not only if you dislike zucchini, but also in situations when you don’t have any zucchini on hand, or the zucchini you bought a week ago that you thought was still good has turned into a mushy mess.

But you can’t use just any substitute for any dish because some of them can have higher water content, different texture, or a strong flavor. So, carefully choose the substitute based on what dish you are preparing.

1. Substitutes for Zucchini in Lasagna

The first and best option for lasagna is eggplant. It has a similar taste and texture, so you can cut it into thin slices like zucchini without losing its structure after baking.

They even have a similar water content, so if you want to avoid watery lasagna, you have to take the extra steps to drain them a little.

The second choice for zucchini substitute is yellow squash because they have a similar texture. The next one would be butternut squash, but then it would probably take a bit more time to cook and have a slightly sweeter taste.

If you are open to experiments, you can try mushrooms, tomatoes, spinach, and even green beans to make a layer in lasagna or even combine these ingredients and make multiple layers.

What to avoid when making lasagna? Cucumbers. They might look similar to zucchini, but they are not a good idea for lasagna.

Cucumbers are very different from zucchinis and don’t work for baking because the dish might end up too watery or even taste stale. They are more useful in salad and raw dishes.

So, if you are making a salad that needs raw zucchini, you could replace them with raw cucumbers.

2. Substitutes for Zucchini in Ratatouille

Ratatouille is a great dish, whether as the main course or side dish. It consists of zucchini, of course, and then tomatoes, onions and garlic, eggplant, bell peppers, and different herbs (usually parsley, basil, and thyme).

This tasty vegetable dish can be made with some substitutes. Since the dish already has eggplant in it, you can replace zucchini with other squashes. The first choice would be the yellow squash because it is the most similar to zucchini.

But, you won’t do anything wrong if you choose one of the other summer squashes.

Whatever you choose, you should always lightly salt the squashes and the eggplant and let it sit in a strainer over a bowl for a little while (15-30 minutes) to drain the excess water. That way, your dish will be creamy and delicious!

3. Substitutes for Zucchini in Pasta

People are used to traditional flour-made pasta but the truth is that there are plenty of pasta substitutes out there, like zucchini, spaghetti squash, sweet potato, chickpea, and many more.

But if you are a fan of zucchini pasta and you need a substitute that resembles the zucchini the most, the obvious first choice is another summer squash. Just put it in the spiralizer and make thin strands of squash pasta.

You can even use spaghetti squash, a winter squash which shreds into thin strands just like angel hair pasta. We didn’t mention it above because pasta is really the only dish this replacement is suited for.

The next best thing is pumpkin. Just like you make the zucchini noodles, you can make the pumpkin noodles with the spiralizer.

4. Substitutes for Zucchini in Soup

If you prefer the traditional vegetable soup, you can replace zucchini with other summer squashes or eggplant, because they all have similar tastes and textures.

However, if you like a creamy soup, you can replace zucchini with other substitutes, not only eggplant or squashes. You can make it with pumpkin and even cucumbers. It all comes down to your preference.

5. Substitutes for Zucchini in Zucchini Bread

Zucchini bread is similar to muffins. It is a slightly sweet quick bread. Often, it contains cinnamon and nuts, but it can contain other ingredients as well, usually grains.

If you are craving zucchini bread but don’t have any zucchini in the house, you can always use the same amount of yellow squash instead.

On the other hand, zucchini is often mixed with pumpkin to make delicious bread. So, you can make pumpkin bread instead of zucchini bread.

What Are the Ways You Can Eat Zucchini?

The interesting thing about zucchini is that it is technically a fruit, just like other squashes. Also, many people don’t know that zucchini doesn’t have to be cooked before you eat it.

Either way, you can make zucchini very quickly because it takes an average of about 15-30 minutes to prepare it.

As mentioned above, zucchini is not actually a vegetable, but a fruit. It is usually green in color, from light to dark green.

This nutritious fruit is high in antioxidants, of which the highest levels are in the skin. Therefore, you should not peel the skin off; is perfectly safe to eat zucchini skin.

Zucchini has a lot of fiber, so it is very good for digestion and helps with irritable bowel syndrome, ulcerative colitis, and Crohn’s disease. It also contributes to heart health, vision, bone health, thyroid health, and prostate health.

Zucchini is low in calories and carbs, and therefore, it may help you reach your weight loss goals if you are on an otherwise balanced diet.

It’s so easy to add zucchini to your daily diet since you can eat them raw, cooked, boiled, steamed, sautéed, or grilled. You can slice them, dice them, grate them, or cut them julienne. It’s up to you!

Is Zucchini Okay for Diabetics?

Zucchini has multiple benefits for diabetics. First of all, it is low in calories and carbs, making it a healthy choice. It has a lot of vitamins and minerals like zinc, potassium, magnesium, calcium, vitamins A, B, C, E, and K.

Zinc and magnesium break down sugar and fiber helps stabilize the sugar levels, so diabetics can have a lot of benefits from adding zucchini to their diet.

What Else Is a Zuuchini Called?

Zucchini is also known as courgette or baby marrow. It belongs to the Cucurbitaceae family, alongside melons, cucumbers, pumpkins, and other squashes.

What Can I Pair Zucchini With?

Zucchinis go well with eggplants, eggs, bacon, seafood, basil, onions, tomatoes, and olive oil. But, feel free to experiment because zucchini is easy to prepare. Just keep an eye on the water content.

Helpful tip: In order to drain the excess water from zucchini, we have two tips for you.

First, after you cut the zucchini into slices, salt it lightly and use a paper towel to pick up the excess water.

Second, if you want to avoid the additional salt in your dish, you can sprinkle some breadcrumbs or raw couscous over the zucchini.

Up Next: The Best Vegetables For BBQ

Can You Freeze French Toast?