The Best Substitutes For Turnips 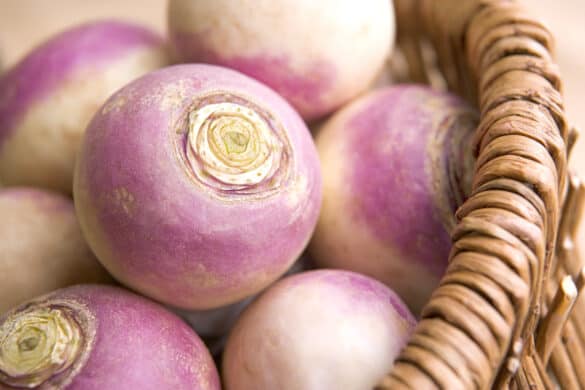 Don’t you just love winter? Especially all the winter vegetables that come with it. Turnips are one of our favorites due to their versatility and unique flavor. But sometimes, even our favorite ingredients have to be substituted.

Whether it is because they are out of stock, or someone who has a dislike for it is coming over for dinner, it can be frustrating to have to figure out what works and what doesn’t.

Let’s start with what a turnip is. A turnip is a root vegetable that is mostly white apart from the top, which is a light purple, red, pink, or green.

The root is mostly round and ranges in size from 2-8 inches (5-20cm) in diameter. The tops (stems and leaves) are referred to as the turnip greens, which are also edible.

Some people confuse this root vegetable with many that look similar, such as beets, radishes, rutabaga, or celeriac. These aren’t necessarily a great substitute just because they look alike.

That’s why it’s important to know what turnips taste like, so you can be able to choose a substitute.

The variety of turnip, as well as the age of it, will affect the flavor of the root and greens, but generally, the best way to describe the taste of both is a cross between a cabbage and a radish.

It has a very strong flavor that leans more towards the sweet side and has a slight peppery taste to it. The taste of both the roots and greens will dilute after putting them through any cooking process.

It is one of those vegetables that you either like, or you don’t.

Because of the strong, unique peppery flavor of turnips, it is not just as easy to substitute it with any root vegetable as some may think.

Of course, you can substitute it with common root vegetables such as carrots, which we will have a look at, but if you want to mimic the taste and texture best, you will need to use more similar ingredients.

Below is a ranked list of what we believe are the best substitutes for turnips, but of course, in the end, it is entirely up to your preference.

Some of you might have never heard of this vegetable, but I can guarantee that you have probably mistaken it for a turnip at the grocery store.

They originated as a cross between a turnip and a cabbage, giving them a very similar look.

Rutabagas look like large, dirty turnips. The color of a rutabaga is either a very dark purple all over or a deep yellow-brown and cream.

With regards to taste, rutabagas are just a tad sweeter than turnips, but other than that minor difference, they virtually have the same flavor profile.

Both these vegetables are interchangeable and can be used in a variety of ways. They are excellent for roasting, soups, casseroles, and stews. They also have the same cooking times, which removes the guesswork required for other substitutes.

You will have to remove the peel of the rutabaga with a small paring knife in order to remove the layer of wax from it – this wax is harmless, it just prevents the root from drying out.

This is, without a doubt, the best substitute for turnips, due to its similarities in taste and texture.

Parsnips are almost like a pale carrot, though the taste and texture differ.

Parsnips have more of an earthy, nutty (almost like nutmeg) taste than carrots.

However, parsnips are not as spicy as turnips and are much sweeter.

That being said, they are still a great substitute due to the similarities of their texture when cooked.

You can substitute the turnips using an equal amount of parsnips. The cooking times for turnips and parsnips are the same, so it can be easily substituted without the addition of new steps.

Using parsnips instead of turnips works great in roasts, stews, and soups. We love using parsnips, as it adds a new layer of flavor (the nutty flavor element) that other vegetable substitutions don’t.

Celeriac, also known as celery root or celery knobs, might not be the most attractive looking vegetable, but it makes a great-tasting substitute for turnips.

It is the bottom part (root) of the more often used celery shoots and leaves.

Its taste is very similar to a turnip’s except for the hints of celery (spicy peppery taste) in it.

To prepare the celeriac, you have to remove the thick, tough skin using a peeler or paring knife. Celeriac also discolors quickly, so you have to use it immediately after cutting it.

There are a bit more steps involved when using this vegetable, but it is definitely worth the effort.

You can substitute the two vegetables in equal parts and cook them in the same manner as the recipe states. Celeriac is definitely the best substitute for turnips when using them in smoothies or juices.

Turnips and some of their other substitutes aren’t that easy to source everywhere in the world, so carrots have the advantage on this one.

Carrots also lean towards the sweeter side of the taste spectrum but most varieties. Once peeled, they don’t have a bitter or earthy taste.

That is why carrots are on this list. Even though they don’t taste exactly like turnips, they are a great substitute for people who don’t like bitter-tasting foods.

Their texture, when used in a recipe, is very similar to turnips and we have yet to find a recipe where you cannot use this substitution. You can use them in roasts, stews, soups, or even smoothies that call for turnips.

The preparation methods in the recipe should stay the same, although the cooking time might differ slightly depending on the thickness of your slices.

Turnip greens are the stem and leafy part of the turnip. They are high in both vitamins and minerals including vitamins A and K, as well as potassium, calcium, and phosphorus.

Like their root, they have a distinct sharp, spicy flavor.

The best substitutes would be kale or Swiss chard. Both these ingredients were hard to find when they initially appeared on the market, but today they are much more accessible.

Both also have slightly more preparation involved, as they have thick stems that will need to be removed to cook a bit longer than the leaves.

Kale has an earthy and spicy taste, very similar to turnip greens. There are different varieties of kale available, but each variety will work great as a substitution.

Kale can be consumed raw, just like turnip greens. If used in recipes, they take longer to cook through, as they are much thicker.

Swiss chard is another great substitute for those people that want a milder flavor. It still has some bitterness in it, but much less than the turnip greens do.

Bonus substitution! If you really can’t find any of these substitutions, use spinach or baby spinach, which is also close to turnip greens in taste and texture.

Spinach cooks much faster though, so make sure to take that into account during the cooking process.

Both turnip roots and greens are extremely healthy. They are very low in calories (much lower than their substitutes) and very high in vitamins and minerals.

The chart below compares the nutritional value of 3.5 ounces (100 grams) of each vegetable.

For those who don’t care too much about all these numbers, they show that turnips are healthy and so are their substitutes, especially rutabaga.

All these ingredients are very high in most of the important vitamins and minerals, meaning that there are tons of health benefits to consuming them (as a substitute or not).

If you aren’t already, definitely make sure to try and incorporate more of these root vegetables into your diet – your body will definitely thank you for it.

Up Next: Daikon Vs Radish – What’s The Difference?

Can You Freeze Alfredo Sauce?

How To Store Raw Meat In The Fridge