Home Foodsguy Daikon Vs Radish – What’s The Difference?
FoodsguyThis vs That

Daikon Vs Radish – What’s The Difference? 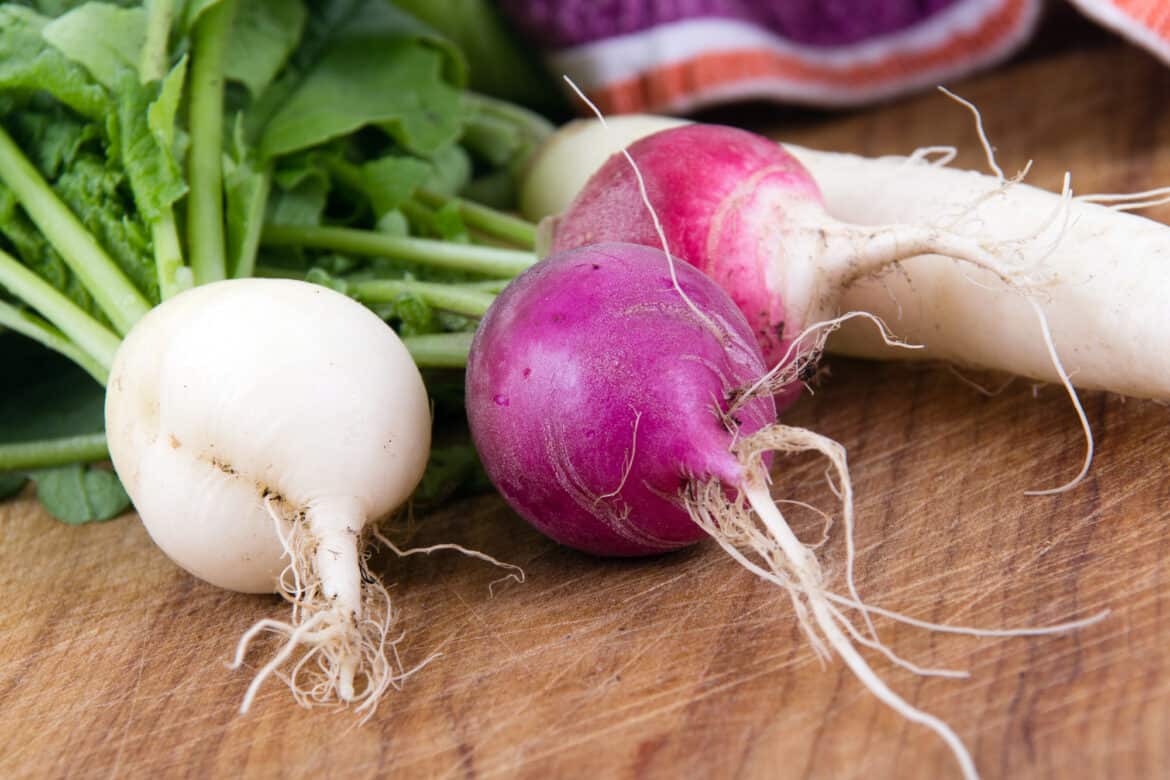 If you’re from North America, when you hear the word “radish” you probably have visions of a small red root with a white, peppery inside. Some people love red radishes and can’t wait to crunch them, straight from the garden.

Other people find the heat too much for their liking and pass on these fresh veggies. If you’re in the latter camp, you may be interested in what we have to share in this article.

What’s the difference between a daikon radish and a red radish? A daikon is a winter radish that looks more like a long, white carrot than a red radish, which looks like a small red bulb. Daikon radishes are sweeter, juicier, and less spicy or peppery tasting than their red relatives, among other differences.

In the rest of this article, we’re going to look at daikon radishes vs red radishes from every angle, including health benefits and popular ways to use each root vegetable.

What Is a Radish?

Radishes are part of the same family as broccoli and cabbage, though they are nothing like either of those common vegetables.

Radishes come in many different shapes, sizes, and colors, but in North America, small red bulbs are the most common.

They can also be white, purple, or even black. Radishes are quick and relatively easy to grow, so they’re popular in small home gardens.

They can be stored for a week or longer without losing their crunch, though if they’re exposed to too much moisture they will start to go a bit soft.

Most radishes have a peppery flavor, though how spicy the root is ranges widely. Younger, smaller radishes tend to be milder. The longer they’re left in the earth to grow, the spicier they get, and they also develop a more pungent flavor as well.

Mustard greens are also within the same brassica family, and they share the peppery taste that many radishes have.

Many people also enjoy eating radish sprouts, which often have even more of a hot kick to them that the full-grown root. They add a lot of punch to salads or sandwiches.

If you find them too spicy, it’s easy to mix them with other, milder sprouts like garlic, broccoli, or alfalfa sprouts.

Radishes are very unique for their crunchy texture and peppery flavor. If you don’t have them on hand, you can substitute for texture or for flavor, but if you want both, you’ll need to substitute them with multiple ingredients.

Daikon radishes can be used as a substitute for red radishes, but their spice is much lighter and they are not nearly as peppery. For the heat, you’d find a better substitution with mustard greens, scallions, or arugula.

For the crisp texture, daikon radish will work well as a substitute for red radish, as will water chestnuts, or kohlrabi (German turnip).

Jicama, turnips, or parsnips can be used in place of radishes if they’re being cooked.

From a macronutrient perspective, radishes have almost no fat, very few calories, and are even low carb. You can eat an entire cup of raw, sliced red radishes for only 18 calories, and you’ll get 2 grams of fiber as well.

The bigger benefits of radishes come from the micronutrients. Red radishes are high in Vitamin C, which boosts your immune system health and helps keep up your youthful appearance.

Radishes are also antifungal, so adding them to your diet regularly can help protect you from fungal infections, including yeast infections, candida, and fungal skin infections that are often mistaken for acne.

The most common way to eat radishes is raw, as either a crudité to dip or added flavor in a salad.

There are so many other options for this spicy root. You can even cook with it, which many people never even think of. Some of our favorite recipes for red radishes are:

Of course, you could also practice your knife skills and show off some pretty radish roses.

What Is a Daikon Radish?

They’re grown throughout the winter and take more than twice as long to mature than red radishes, which are ready to harvest in only 4 weeks.

Daikon radishes need to be stored carefully to keep them from drying out.

The green tops will draw moisture from the roots, and if they’ve been picked, this will ruin the juiciness of your vegetable, so simply cut the tops off and wrap the daikon in plastic or place it in a sealable bag before refrigerating it.

Daikon radishes are somewhat sweet and have only a hint of the spice the red variety is famous for.

If it’s eaten raw, it’s crisp and juicy with just a mild, almost tangy flavor. It’s commonly cooked, however, which sweetens the root and brings out a flavor similar to turnips.

The greens from daikon are also edible and delicious when sauteed into a stirfry or chopping them up into a broth-based soup.

As with red radishes, daikon radish sprouts are also popular and much spicier than the full-grown root vegetable.

Since daikon is a radish, you would think that it would be naturally very easy to substitute it for red radish in a recipe. That’s not always the case.

If you’re following a recipe, there’s a good chance you’re cooking your daikon. While you can cook red radishes, they lose a lot of their flavor and texture and end up as little more than filler.

Daikon radishes, on the other hand, retain more of their texture, being a much larger root, and develop a mild, sweet flavor that is often compared to turnips.

For this reason, if you need a substitute for cooked daikon, turnip will be the best solution.

If you’re using grated daikon for the health benefits or the slightly peppery zest, then a young red radish will do the trick.

The older red radishes will be much spicer and may not give you the effect you’re looking for, but a young radish is milder and will substitute well.

In Japan, daikon is commonly used as a detoxifying agent, so it’s often eaten with or after a heavy meal of fried foods. It’s thought that the radish will help the body eliminate the fats and other toxins.

As with all radishes, daikons are low in calories and high in fiber, making a great healthy snack, especially for those with weight loss in mind.

Daikon is popular mainly in Asian cuisine, where you’ll find it cooked, pickled or eaten raw.

All forms of the root are used, from the sprout to the green tips of a fully-grown vegetable.

Here are some of the most popular recipes:

What Is Daikon Oroshi?

Some recipes that will often be garnished with daikon oroshi include steak, tempura, or tofu, especially when deep-fried.

There are myths that radishes at night can allow coughs and other viral infections in, but there is no medical proof for this whatsoever.

It’s interesting to note that there is a Mexican festival called Noche de Rabanos, or Night of the Radishes.

Possibly searching for this festival created confused questions and search results, leading to the beginning of the controversial, unsubstantiated myth.

Some people enjoy eating radishes and other crunchy, low calorie, low carb and/or low fat veggies at night to satisfy cravings for crunchy snacks without ruining their diets.

If you have a hard time digesting radishes, they’re going to be even more difficult to digest at night, but that depends on the individual.

Is Daikon a Turnip?

No, a daikon is a radish, not a turnip, however, they’re in the same brassica family.

When daikon is cooked, it tastes remarkably similar to turnips, and they have similar coloring, so this confusion is understandable.

Up Next: How To Store Radishes – The Complete Storage Guide

Is Coffee A Vegetable? – The Complete Guide

How To Make Coffee Without A Filter