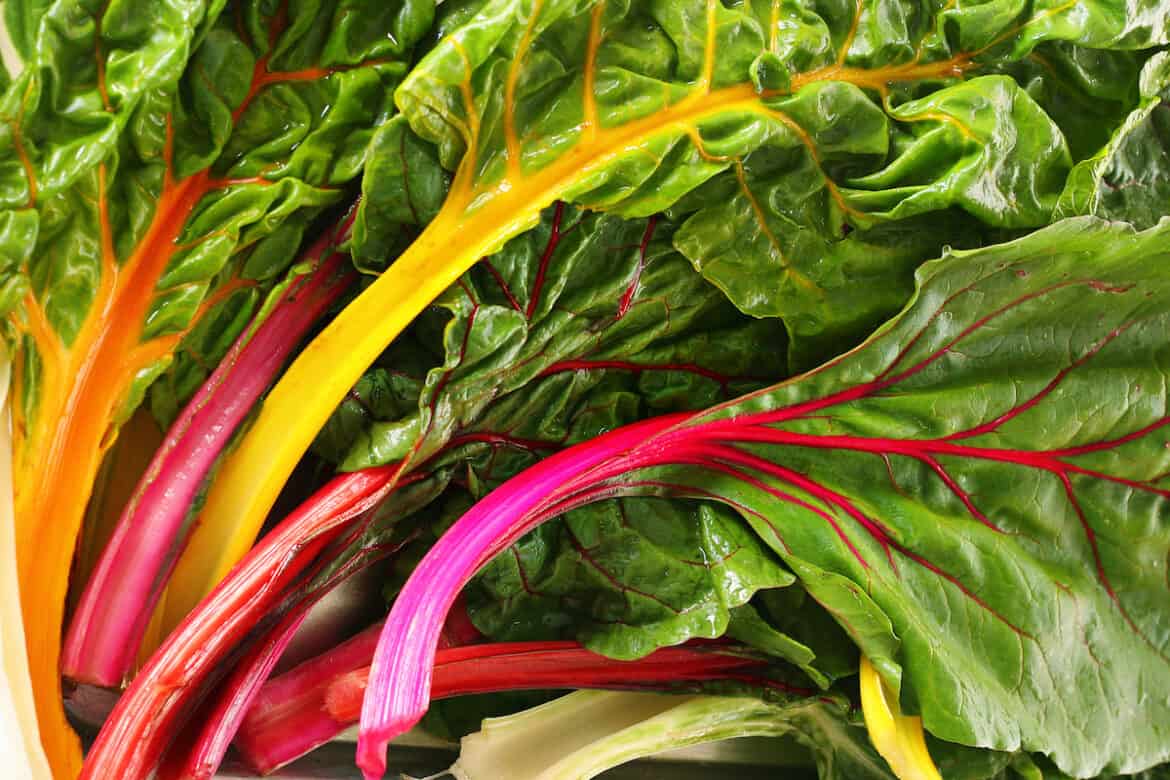 Swiss chard is a leafy green vegetable that comes in a rainbow of colors. This vegetable is not only beautiful but also very nutritious, with a low calorie count.

Every day, Swiss chard is becoming increasingly popular, but depending on where you are located, Swiss chard can sometimes be very difficult to find.

Today, we will be looking at all the elements of Swiss chard, including its flavor, texture, preparation methods, uses, and nutrition content.

All of these elements are important to know in order to choose the correct substitute. For example, if you want a similar-looking substitute, beet greens are the best, but if you are looking for a flavor substitute, spinach is better.

Swiss Chard, also commonly referred to as just chard or rainbow chard, is classified as a leafy green vegetable.

Because it closely resembles so many leafy green vegetables, before it became popular, many cooks used to refer to it by names such as silverbeet, beet spinach, leaf beet, seakale beet, or perpetual spinach.

All of these terms actually refer to the same vegetable, swiss chard. Luckily, today we have a much better description of this delicious vegetable and it is much easier to find.

Swiss chard consists of two main parts: the blade (which refers to the large thick stem that forms the main vein), and the leaf. These two parts are often prepared separately from each other.

The blade is thick and runs in the center of the large leaf. With Swiss chard, this blade can either be a deep vibrant green, pink, purple, red, white, or yellow – this is truly one of the most beautiful vegetables you will find.

The flavor and texture of Swiss chard closely resembles that of many other leafy greens.

The flavor of the leaves specifically might be slightly bitter to some people. Although everyone can agree that it has a much less earthy and vegetal flavor compared to greens like beet and kale.

The stem (blade), on the other hand, has a much sweeter flavor than the leaves.

Both fresh leaves and stems should have a crunchy, tender texture. If your leaves are soft, they aren’t fresh enough and should instead be used in cooked dishes.

Once cooked, both these components soften considerably and can be cooked soft enough to become a smooth purée.

Swiss chard is an extremely nutritious vegetable and extremely low in calories. That’s why most people include it in their diet, so naturally, your substitute should have similar properties if this is what you’re after.

Only a small amount of Swiss chard (about 1 cup) contains enough vitamin A, K, and C to fulfill your daily recommended intake. However, the same cup of chard only has 7 calories!

It is also extremely high in minerals such as calcium, copper, zinc, magnesium, sodium, and phosphorus.

All these different vitamins and minerals mean it has a ton of antioxidants, is packed with fiber, has components that are beneficial for heart health, helps lower blood pressure, and may help promote weight loss.

These are only a few of many important health benefits!

If you are using Swiss chard for any of these benefits, make sure to choose a substitute that will still fulfill that specific need.

How to Prepare Swiss Chard

The most common way Swiss chard is prepared is by cutting out the blade (stem) of the large leaf.

Run a sharp knife along both sides of the large stem, all the way to the top. Remove the stem and cut it into the desired sizes. The leaf can also be cut into smaller sizes.

The size of the pieces will depend on the uses. If you are making a soup or smoothie, the pieces don’t have to be as small, but if you are using it fresh in a salad, you may want to cut it into easy-to-eat or bite-sized pieces.

The main reason people include Swiss chard in their diet is for the nutritional benefits it provides.

Swiss chard can either be consumed raw, cooked, or blended (like in a smoothie or soup). What makes this leafy vegetable so amazing is the many ways it can be prepared.

Here are some delicious ideas for Swiss chard:

The best way to cook this leafy vegetable is to steam it. This way, it retains most of its nutrients and its fresh color. Swiss chard can also be blanched, sautéed, braised, or roasted with other vegetables. Some people have even deep-fried it!

The Best Substitutes for Swiss Chard

Below is our ultimate list of Swiss chard substitutes and alternatives. Some of these are easier to find than others, however all of these are interchangeable and equally delicious and nutritious!

In our opinion, spinach is the closest substitute to Swiss Chard, however, only mature spinach (the ones that also have the large leaf and thick blade).

Spinach leaves are also slightly bitter, while the stems are slightly sweet, and unlike most other leafy vegetables, spinach and Swiss chard don’t have that earthy flavor.

Mature spinach can be prepared in exactly the same way Swiss chard can and makes a flawless, barely noticeable, substitute. You can cut out the center stem and use both the leaves and stems in recipes.

Compared to many of the other substitutes, spinach is by far the easiest to find.

If for some reason you cannot find mature spinach leaves, you can use baby spinach. Baby spinach is exactly what it sounds like; these are smaller-sized spinach leaves that haven’t matured yet.

Baby spinach leaves are popular in salads because they are much sweeter than their mature counterpart.

They are also much more convenient and easy to use compared to both mature spinach and Swiss chard, as you only have to wash them before using them.

There are a ton of different varieties, but the ones that work as a substitute for Swiss chard specifically are the leafy mustard greens.

Regardless of which variety you get your hands on, these leaves are known for their peppery taste with hints of bitterness. They definitely have an earthy taste to them, so keep that in mind for raw recipes.

In terms of preparation, you have to keep their flavor in mind. If you don’t like peppery flavors, or your recipe already calls for pepper, simply adjust the ratios or choose a different alternative.

Leaf mustard (aka mustard cabbage, gai choy, or bamboo mustard) is the most common type and can be found in most places. These leaves almost look like baby spinach, but slightly larger and with a sleeker shape.

Korean red mustard and Japanese giant red mustard are two Asian varieties that you are most likely to find on that continent. These are beautiful reddish-purple leaves that have a much more intense, peppery taste compared to other varieties.

The last common mustard leaf variety is curled leaf mustard, or American mustard, Texas mustard, or Southern curled mustard. These leaves are large and curly at the ends, almost like kale.

Collard greens are a very popular nutritious leafy green that closely resembles cabbage and broccoli genetically, at least. They are also similar to kale and mustard greens therefore will work as a substitute for Swiss chard.

Luckily, they don’t taste entirely like cabbage and have the same bitter, nutty flavors that Swiss chard has. They also cook in very similar ways and are an especially popular ingredient in South American cooking.

Other continents that are well-known for their use of collard greens include African countries (especially East Africa) and South Asian countries like India.

To cook collard greens, you have to remove the stems. These stems (or blades) aren’t typically consumed due to their tough texture that is hard to soften. Instead, use collard greens as a substitute for Swiss chard leaves.

These leaves have an intense flavor when consumed raw, however, as they cook, the flavor becomes more mild and enjoyable.

Beet greens are another beautiful leafy green vegetable that are the leaves of beetroots (the purple root vegetable).

These leaves grow above ground and have deep pink/red blades (stems) that grow into equally beautiful veins. The leaves themselves are a beautiful vibrant green color.

Visually, beet greens resemble Swiss chard closest, but flavor-wise there are a few differences. First, beet greens have a very earthy flavor, but also carry those nutty notes chard has. It makes a great substitute for kale if you ever need some.

Beet greens are very easy to come by these days, or you can just purchase them with their beets attached! They can be found worldwide in your local grocery store, or farmers’ markets.

To prepare beet greens, you can follow the same steps as Swiss chard and mature spinach leaves. Remove the stem (which is edible) and cut the leaves separately.

The cooking methods that you can use for beet greens are also virtually the same as for Swiss chard.

There are many different varieties of kale, but as a substitute for Swiss chard, black kale is the best one. This variety is also known as Tuscan kale, dinosaur kale, or lacinato kale.

This kale has much darker green leaves, sometimes almost black. This texture has a bumpy appearance, much like lizard skin or very crinkled paper.

Black kale doesn’t have curly leaves like the more common kale does, but rather bumpy, flat palm-shaped leaves. Black kale is much sweeter than normal kale and also has those nutty flavors that Swiss chard has.

No matter which variety of kale, it is best to blanch or steam it first before sauteing or braising the leaves. This helps soften the hard robust leaves.

If you don’t have access to black kale, you can use curly kale instead. Just keep in mind that curly kale has bitter and earthy flavors that aren’t as close to that of Swiss chard.

Up Next: Can You Freeze Microgreens?