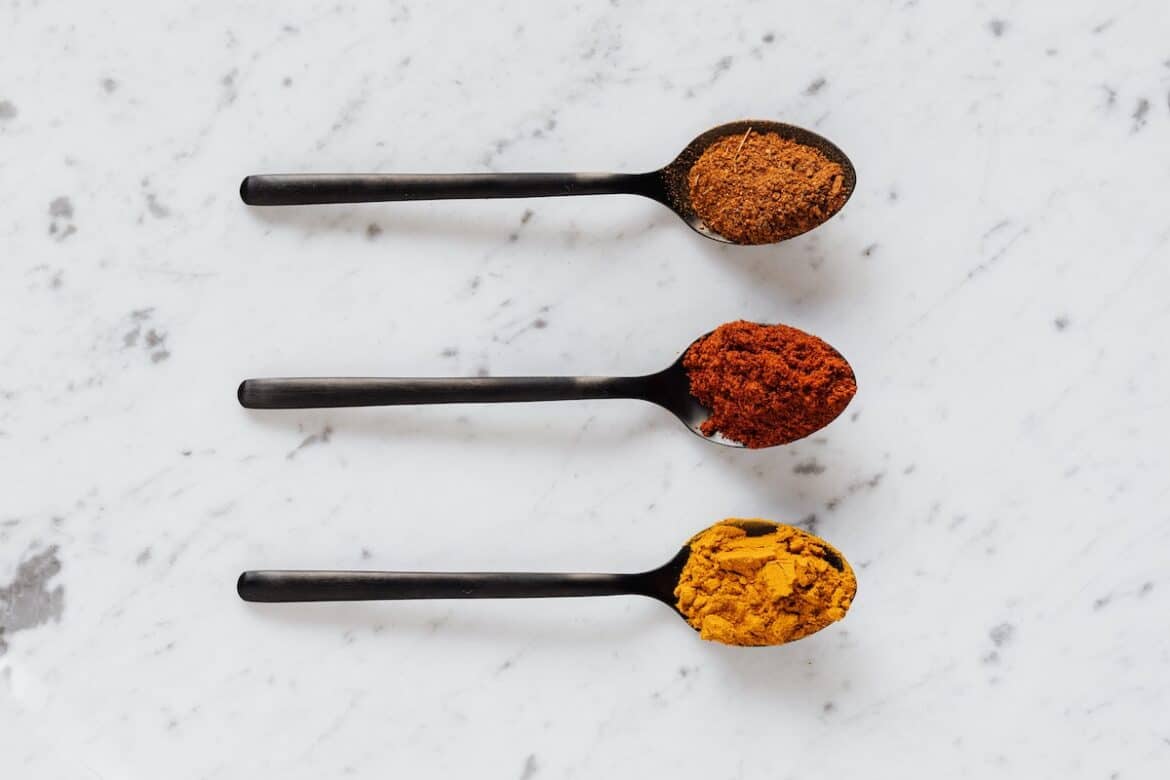 If you grew up on the coast or just love eating seafood, then you’re probably familiar with Old Bay Seasoning.

The yellow can is a staple in kitchens across the country thanks to its unique and savory blend of herbs and spices most commonly used in seafood dishes.

The spice blend has been around since the 1930s and is currently sold by McCormick & Co. spice company. They claim that the blend contains about 18 different herbs and spices, many of which are kept secret.

What we do know for certain is that it contains celery seed, paprika, mustard, salt, red pepper, and black pepper.

Many home cooks and chefs have worked hard to try to replicate the taste of Old Bay Seasoning so you can enjoy the flavor even if you can’t get your hands on the original.

Read on to discover the 11 best Old Bay Seasoning substitutes you can use in a pinch.

What Is Old Bay Seasoning?

This seasoning is often used to flavor crab boils and seafood dishes, but its uses in the kitchen are really endless. The flavors complement poultry, eggs, meats, salads, potatoes, beans, and other roasted veggies.

It’s smoky, spicy, sweet, and savory so it really tastes great in endless preparations. While the substitutes may not be exact replicas of Old Bay Seasoning, they can still add lots of flavor and excitement to your dishes.

If you want to get creative and make your own Old Bay Seasoning at home you can try the following recipe. Feel free to add more or less of any of the herbs and spices to adjust the flavor to your taste buds.

In a small bowl combine the following ingredients:

Once whisked together, store in an airtight container in a cool, dry place.

While the flavor profiles in Cajun spice blends aren’t going to be an exact match to Old Bay Seasoning, they can get pretty close.

It contains many of the same ingredients you’ll find in Old Bay such as mustard, celery salt, pepper, paprika, and cayenne.

It is generally spicier than Old Bay seasoning thanks to the ancho chilies and smoked chili flakes.

If you want to bring the Cajun seasoning a little closer to the flavors of Old Bay try adding a couple of pinches of pumpkin spice mix.

I know this sounds silly, but the pumpkin spice contains the cloves, ginger, cinnamon, cardamom, and allspice that are characteristic of Old Bay seasoning.

So adding a couple of pinches to your Cajun seasoning before using it can be a great trick.

This spice mix is a great combination of spicy, sweet, salty, savory, and sour, which means it can be a good substitute for Old Bay Seasoning in a pinch.

It is made of a blend including cinnamon, fennel seeds, star anise, Sichuan peppercorn, and cloves.

The star anise is probably the flavor that you are least familiar with, but it is one of my favorites. It has a subtle, licorice-like flavor that really complements soups, seafood, and meats.

Since one of the most predominant flavors in Old Bay Seasoning is the celery salt, you may want to add some to your Chinese Five Spice to get a closer flavor.

A good trick is to take a look at the list of spices and herbs in the homemade Old Bay recipe above and add in any that you particularly enjoy, such as the mustard, celery salt, and bay leaves, to make your perfect Old Bay substitute.

You can pick up some Chinese Five Spice on Amazon right here.

Another great option you can use to substitute your Old Bay is seasoning salt. One of the most popular brands is Lawry’s Seasoning Salt, which is easy to find and super savory and delicious.

Like Old Bay, some of its spices are a trade secret, but it does contain paprika, garlic, sugar, and salt.

You can enjoy it just as it is, or if you want to spice it up a little (no pun intended), you can add some celery seed, mustard powder, and a pinch or two of the pumpkin spice mix to get it even closer to the original flavor.

This spice mix is popular in French cuisine and is considered by some to be their equivalent of allspice. You can make your own by combining equal amounts of ground pepper (white, black, or both), cloves, nutmeg, and dried ginger.

Four spice is often used in soups, slow-cooked meats, vegetable dishes, and charcuterie like pate and sausages. Some mixes will replace the pepper with cinnamon.

This mix with cinnamon is similar to a pumpkin spice blend and is delicious in sweet dishes.

This mix has a spicy flavor and as you can see, contains 4 of the ingredients commonly used in Old Bay seasoning.

You can use it on its own or add some paprika, celery salt, mustard powder, and red pepper to get even closer to the original.

You can pick up your own French Four Spice blend right here.

Zatarian’s Crab Boil spice mix is a great substitute for Old Bay Seasoning, especially if you are planning to use it in a seafood boil. It comes in a convenient boil bag that you can throw right in the pot with whatever you’re cooking.

Though it doesn’t contain all 18 herbs and spices found in Old Bay, it does include mustard seed, cayenne, coriander seed, dill, allspice, and bay leaf.

These herbs and spices are in their whole form instead of ground, so if you plan on using them to sprinkle on dishes you will want to grind them up first.

As you can tell, it’s missing some key flavors of Old Bay, so as always, feel free to add in some celery salt, paprika, and a pinch or two of pumpkin spice to round out the flavor.

If you’d like to pick some up you can check the current price on Amazon.

You can often find ready-made blends of pickling spices at the store and just like Old Bay they are designed to pack a lot of flavor.

Most pickling spices will have a similar combination of ingredients, though there is always some variety so make sure you read your labels.

However, as we know celery salt is one of the predominant flavors, so you’ll want to add some to the mix. You can also include a bit of paprika and red pepper to take your pickling spices to the next level and get closer to the Old Bay taste.

Try these spicy pickling spices or this milder blend.

This spice mix might be the closest one to Old Bay Seasoning that you can find without having to add or change anything. It contains a blend of 20 different herbs and spices traditionally used in Chesapeake Bay seasoning mixes.

It used to be called Crabby Dirt because it was often used in crab boils. While some herbs and spices are a trade secret, it looks and smells quite similar to Old Bay and makes a great substitute.

The ingredients that are listed on the label include paprika, celery, mustard powder, onion powder, garlic powder, dehydrated garlic, and chipotle peppers.

Since all the herbs and spices are ground, you can use it any way you would use Old Bay.

If you’d like to give Todd’s Chesapeake Dirt a try, you can check the current price on Amazon.

This seasoning is great because it’s been tried and tested in Phillip’s Seafood restaurants.

Like most seafood seasonings, the specific blend of herbs and spices is a trade secret, but it does for sure contain paprika, celery salt, pepper, allspice, mustard, and ginger.

It has an incredibly similar flavor to Old Bay, especially since it contains the celery salt that is such a key component of the flavor profile.

You won’t need to make any adjustments to this seasoning mix. Just use it in place of Old Bay Seasoning in any of your recipes.

It comes in a great little metal container to help keep the herbs and spices fresh and flavorful.

To try Phillip’s Seafood Seasoning you can check the current price on Amazon right here.

I love this alternative to Old Bay Seasoning because it uses fresh herbs and spices, so the flavor really pops. You can use it to replace Old Bay in any recipe without having to add anything extra or make any adjustments.

This blend is a great choice for people who want to use fresh, organic spices, but who still want that authentic flavor of Old Bay Seasoning.

Since it contains sea salt, you won’t have to worry about adjusting the amounts of salt in your recipe. Just measure and go!

If you want to try the Fresh Bay Organic Sea Seasoning you can check the current price on Amazon.

The Pacific Seafood Seasoning blend is a perfect alternative to Old Bay Seasoning since it contains many of the ingredients you’ll find in the homemade versions. That means you can use it in a one-to-one replacement in any recipe.

The only thing that is missing from this blend is the salt, so you will want to make sure that you adjust the amount of salt in your recipe to make up for it.

While this blend may be a little more expensive than the original, it doesn’t contain any additives or preservatives. It also comes in a super handy magnetic tin that you can store right on your fridge.

If you want to give it a try, you can check the current price on Amazon.

Best Ways to Use Old Bay Seasoning And Substitutes

One of the original and still most delicious ways to use Old Bay Seasoning is in a crab or seafood boil. The blend of spices doesn’t overpower the delicate flavor of the seafood, but enhances its sweetness and brininess.

However, you don’t have to stick to just the basics! You can use your Old Bay Seasoning in tons of creative ways in the kitchen. Take a look at some of these ideas for inspiration:

As you can see there are endless uses for Old Bay Seasoning in your kitchen. For everything from seafood to cocktails, this spice mix is the perfect pantry staple to use as a secret ingredient in your cooking.

And if you don’t have any on hand, try one of the great substitutes listed above!

Up Next: Chickpeas Vs Lentils – What’s The Difference?

Chickpeas Vs Lentils – What’s The Difference?

What Does A Mango Taste Like? – The Ultimate Guide