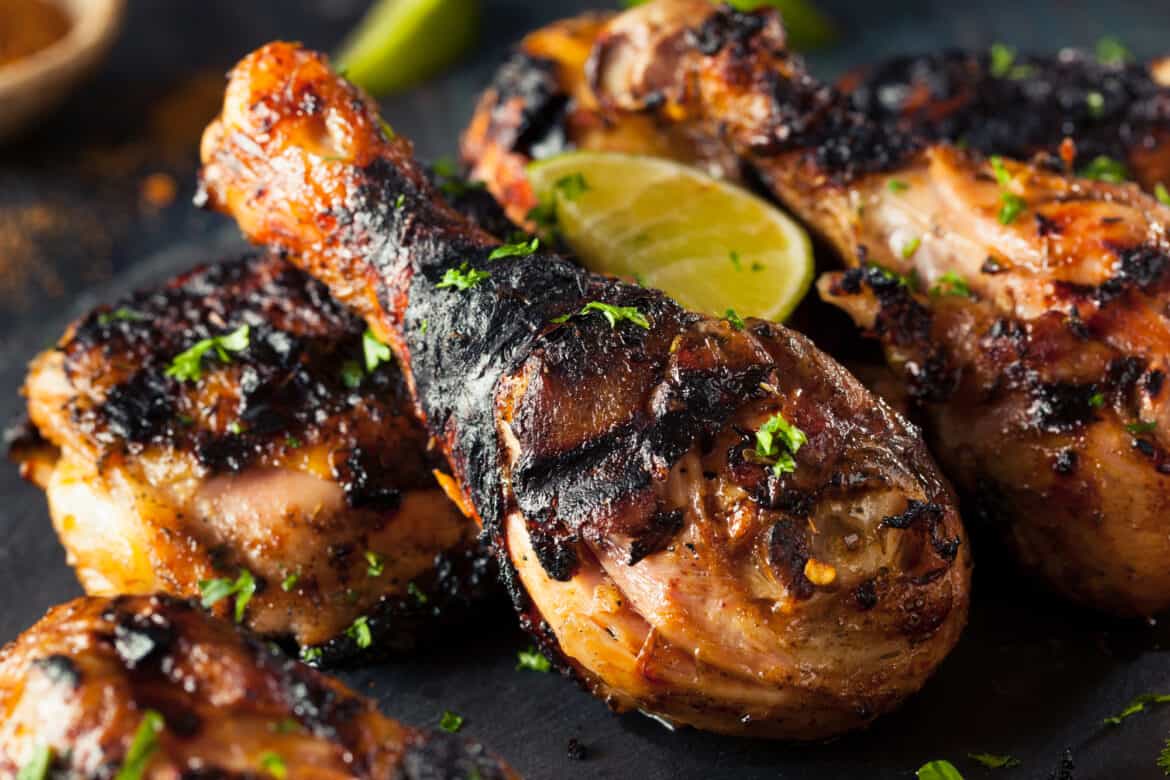 Jerk cooking is becoming more and more popular by the day! Unfortunately, the hero ingredient for this technique, jerk seasoning, isn’t always so easy to find.

But what exactly is jerk spice? And what are the best substitutes for jerk seasoning? This spice is extremely flavorful, very spicy, and has sweet, salty, smoky, and fruity flavors. The best alternative is to make your own jerk seasoning at home so you can adjust the flavors as you’d like. You can also buy some other similar seasoning mixes such as ras el hanout, berbere, and more.

Today, we will have an in-depth look at which alternatives will work best as a substitute for jerk seasoning.

We will discuss their similarities and differences, plus what adjustments you can make to give it a more overall authentic jerk flavor!

What Is Jerk Seasoning?

Jerk seasoning is a spice commonly used in jerk cooking — we know that doesn’t clarify much.

So, to help give you a better idea of what this seasoning is and how it’s used, let’s first look at what jerk cooking is!

Jerk cooking is a style of cooking that is popular in Jamaica. The technique involves making a dry rub or wet marinade with a specific, spicy mixture. This mixture is called Jamaican jerk spice or just plain jerk seasoning.

Traditionally, the meat used was only chicken or pork. But today, people use virtually any type of meat and cooking methods.

The two main ingredients that should always be used in any jerk spice mixture are allspice and scotch bonnet peppers.

But today, there are thousands of different recipes out there. They use different accompanying ingredients and ratios to create subtly different flavors.

For the spicy element, they usually add some red pepper flakes (not the same as chili pepper flakes) or cayenne pepper. Almost all jerk spice recipes include scotch bonnet peppers — or at least they should.

And finally, some of these recipes contain a couple of pinches of brown sugar, salt, and black pepper. These three ingredients help create a more balanced seasoning.

Jerk seasoning contains a very complex flavor profile, especially if the recipe includes a variety of spices and not just allspice and scotch bonnet.

Jerk spice should have a slightly sweet, smoky, and spicy flavor profile. Naturally, it is a heavily spiced mixture, but surprisingly not as salty as you’d think. You can also often pick up some fruitier flavors depending on the spices you have used.

The exact spice level depends on the type of chili pepper used and how much of it is used. Overall, authentic jerk seasoning is extremely spicy. You can find versions that have mild, medium, or hot spice levels to best suit your tastes.

Choosing a substitute for jerk seasoning is relatively simple — because there just aren’t that many equally flavorful alternatives.

You should ideally choose an option with sweet, salty, smoky, fruity, and spicy flavors. We know; it’s difficult if you don’t know what a spice mix tastes like. So, we’ve created a list of the best alternatives for jerk seasoning.

Not only did we include some amazing matches, but we also tried to add some easier-to-find options. And, you can make all of these spice mixes from scratch too!

So without further ado, let’s look at the best substitutes for jerk seasoning.

The best alternative for store-bought jerk spice is making your own at home. It is incredibly easy, and you might even be surprised to find that the flavor is much better!

Making your own spice mix will allow you to make small changes to the recipe. That, in turn, will create a spice perfectly suited to your flavor preferences.

So, as we have mentioned, the base ingredients for all jerk spice mixes include allspice and scotch bonnet. So, if you really have to, you can use just these two ingredients.

But, if you’d like to create a complex spice mix, you’ll need to add a couple more ingredients. There are a ton of jerk seasoning recipes out there you can try. Below is a simple recipe that is our go-to quick option.

For this alternative, you can easily adjust the spiciness level by changing the amount of cayenne pepper and scotch bonnet flakes you add.

Both the flavor and function of this option are the same as store-bought jerk spices. But, there are loads more benefits to making your own recipe at home.

It won’t contain any chemical additives, it is easily customizable, and you can make as much or as little as you need!

Jerk seasoning sauce is a great option if you need a jerk wet marinade. Naturally, it won’t be an effective alternative for a dry rub.

This sauce comes in a variety of consistencies. Most often this is a very thick textured sauce, while some are virtually a paste and contain little to no liquid, and yet others are more like a flavored dressing (a very runny sauce).

You can buy jerk seasoning sauces and pastes in many stores or online. You can also make your own at home.

If you do, simply add some chopped scallions, soy sauce, and fresh scotch bonnet peppers. You can also add olive oil to hydrate the dry spice mixture.

This curry powder (or paste) is traditionally used for many Indian lamb dishes, but it contains many mutual spices that make the two seasonings a great alternative for one another.

And naturally, as with virtually all seasoning mixes, it also often contains onion, ginger, and garlic powder.

If you want to make the overall flavor profile lean more towards authentic jerk seasoning, try using smoked paprika instead. Also, add some sugar to give it a sweeter flavor. And, you can substitute the cloves for some allspice.

This option isn’t as spicy as jerk seasoning, but that’s easily adjustable. You can add more red chili powder or incorporate scotch bonnet peppers (fresh or dried) into the recipe.

Ras el hanout is another great spice mix that contains many similar spices. But we don’t recommend making this one at home — it contains a ton of different ingredients which you may not already have at home.

For the winter spices, it does contain allspice. But also cloves, cinnamon, nutmeg, and mace.

So as you can see, it is a very rich and complex seasoning mix. It is more flavorful (in some ways) than jerk seasoning, but it still works incredibly well as a substitute.

You can adjust the level of spiciness by adding more scotch bonnet peppers if you’d like. Otherwise, you can use this mix as-is and hydrate it with olive oil for a wet marinade.

It isn’t as popular in most Western or Eastern countries and cuisines, primarily because it isn’t well-known in those regions since we already have a similar, local version of this spice.

This mix is made of a combination of winter spices. They include black pepper, salt, allspice, cardamom, cumin, coriander, cloves, and paprika.

This spice, as is, is extremely flavorful and contains similar undertones that jerk spice does. However, it isn’t a perfect match. Luckily, you can make some adjustments.

You can add smoked paprika to give the mixture a smoky flavor, like jerk spice. You can also add some salt and sugar to help create a more balanced flavor.

And, you can naturally add some scotch bonnet chili peppers to make it spicy. And if you only have chili pepper flakes or cayenne pepper, they’ll do too. If you don’t add chili spice, the mixture won’t have any spicy flavors.

Other spices that both of the mixes contain include garlic powder, onion powder, salt, and cinnamon. You can add a few pinches of sugar to give it a sweeter flavor profile.

This spice mix also commonly contains wintery flavors like cloves, ginger, and mace. But, if you want that authentic allspice flavor that jerk seasoning has, you can add some to the spice mix.

This seasoning mix is relatively easy to find, but it is also easy to make. And as we mentioned before, there are many recipes out there with different spicy levels and different flavor elements! So, it’s easy to choose the one you like most.

Berbere is a seasoning mix from Ethiopian cuisine. It is a very spicy mix that mainly uses red chili powder.

It does, however, contain similar spices like allspice, black pepper, cumin, nutmeg, cinnamon, paprika, and salt.

In addition to these similar ingredients, berbere spice also contains garlic, onion powder, fenugreek, and citrus peel. The citrus peel isn’t a common addition, but it is sometimes used to help add some sweetness.

Again, as with all of our above-mentioned alternatives, you can change the flavor profile of the spice slightly. Add a couple of pinches of sugar for a sweeter flavor. And don’t forget to add more scotch bonnet peppers if you want it to be spicier!