What Is Trail Bologna? 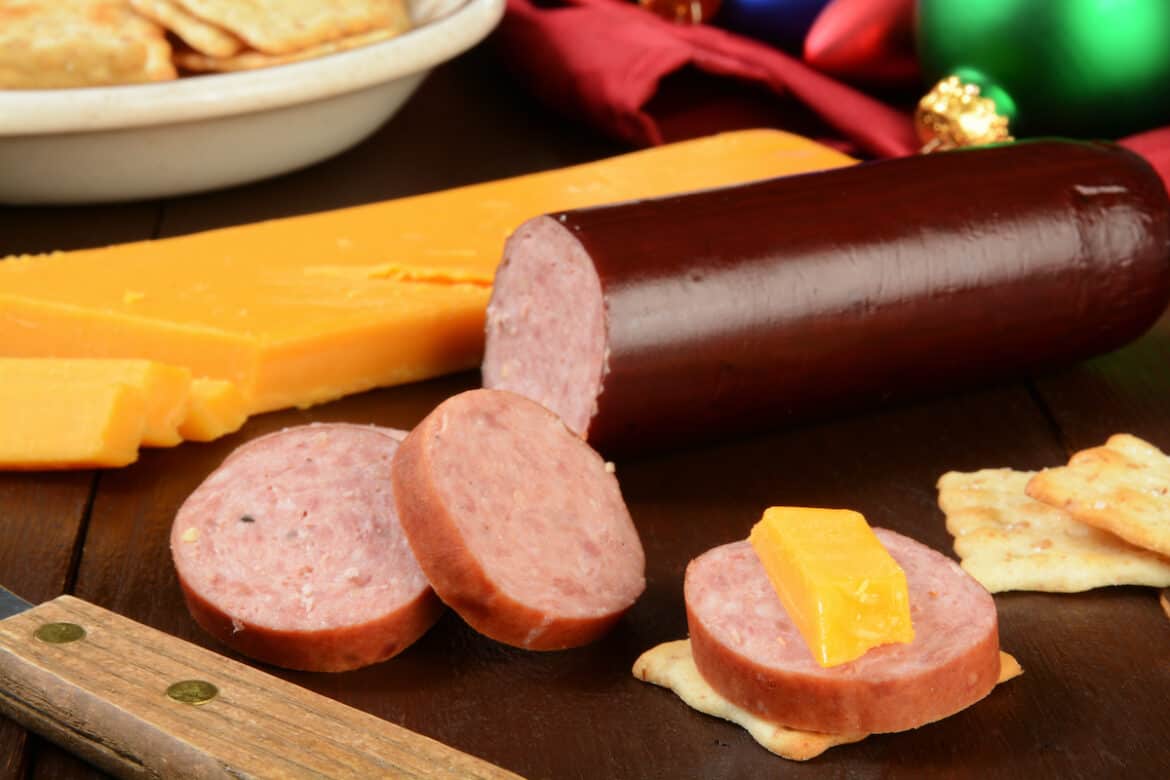 Trail bologna is a treat like no other and if you enjoy beef sausages then you will surely love the flavor of this special cured and smoky meat!

What is trail bologna? While other sausages are made from a higher percentage of fat and pork, trail bologna is made from a leaner cut of beef. There are many varieties of this sausage and you can even purchase spice kits that you can use to make your very own version of trail bologna at home.

Read on to learn more about this special sausage, how it is different, how it’s made, and how it compares to other sausages!

What Is Trail Bologna?

Hailing from a settlement called Trail in Ohio, this sausage has a legendary status and is popularly known by many beef lovers around the US.

Many sausage makers follow a strict recipe that has been passed down from generations to make this bologna. Trail bologna is different from other sausages because it uses a leaner cut of beef—and traditionally, just beef!

Unlike other sausages, like the equally famous summer sausage from the European region, trail bologna contains about 20% or less fat.

While it is traditionally made from an all-beef ground, it can also be mixed with either pork meat or pork fat.

Many purists prefer the all-beef version of this sausage as it tastes better with the seasonings while others prefer to blur the line by adding different types of meat cuts, cheese, and more.

Trail bologna can be found in abundance in Ohio but is also available across the USA. There are also trail bologna kits that you can buy online or from a local store!

The kit contains everything that you need to get started on your very own version of trail bologna at home.

We’ll discuss how to make them below, but first, let’s see how master sausage makers cook this delicious bologna using industrial methods.

How Trail Bologna Is Made

To make trail bologna, sausage makers will choose from a range of seasonings based on local or regional preferences.

Most sausage factories make several versions of the same product to cater to the needs of different palettes so you are bound to find trail bologna in different forms.

First, the meat arrives at the factory and is tested and washed. Next, the meat is cut into different portions and set aside for grinding.

In the case of trail bologna, the meat of choice is usually beef but every manufacturer has its own unique take on the recipe. Some like to add a bit of pork trimmings while others will strictly stick to beef.

The meat is then grounded using large and specialized grinders. Again, every manufacturer has unique specifications, so they will usually grind the meat at a certain thickness level.

When the fat and meat have been grounded and mixed, the mixture is then shifted to a large mechanic mixer.

Workers will then add a mix of spices and seasonings along with other ingredients to cure the sausage as it cooks. The meat is then mixed for several minutes and is then packed in fibrous casings.

Each casing is then manually or mechanically tied and the rolls are then hung on customized trolleys.

Now there are two ways the sausage can cook. It could either just head towards an oven and cook directly without additional seasonings or it could also be smoked!

Trail Bologna is available in both smoked and non-smoked varieties. The meat will cook for up to 2 hours or until it reaches an internal temperature of 165°F.

Once cooked, the rolls will then be dipped in an ice bath to halt the cooking process and to rapidly decrease the internal temperature of the bologna. The rolls will then sit for about 2-3 hours and will be ready to eat!

Trail bologna has a distinct garlicky, earthy, spicy, and subtly sweet flavor. The smoked version of this product will have a very strong but deliciously balanced smoky flavor too.

The texture of trail bologna is firm and since it has a higher percentage of lean meat compared to summer sausages, it will have more of a satisfying and chewier bite.

Compared to other sausages, which usually have a mix of tangy and spicy flavors, trail bologna will usually have a peppery, garlicky, smoky, and umami-laden flavor.

Since trail bologna is predominately made from beef, you will also notice a more yeasty and slightly gamey flavor from the meat. If the product includes pork and pork fat, then you might get a mix of those flavors as well!

All in all, many people believe that it doesn’t matter what percentage or ratio you use to make trail bologna as its seasonings can easily cover any discrepancy that may be caused by the use of different types of meat.

Trail bologna can be used in many ways. Although it is traditionally paired with cheese, crackers, and wine, there are other ways you can enjoy its unique smoky flavor too.

Perhaps the best use of trail bologna is in sandwiches and subs. This sausage can pair extremely well with just about any type of food.

For example, even though the meat is already cooked to perfection, some people may choose to fry diced pieces of trail bologna and serve it with eggs during breakfast.

Similarly, trail bologna can also be fried and added to soups, stocks, and other bases. You can even slice this sausage and add it to salads along with pickles and onions!

Trail bologna can also be mixed with other types of sausages. For the best results, make sure that you pair this sausage with non-smoked meat so that you get a rounded and overall balanced flavor.

How To Make Trail Bologna At Home

Making trail bologna at home is very easy if you have all the ingredients at hand.

For this recipe, you will need:

Before you begin, you might want to first decide how much bologna you require. Trail bologna kits come in different sizes. We recommend that you get one that makes about 10lbs.

In step 4, you could also choose to smoke the meat.

Preheat the smoker to 180°F and set the casings in for around 1-2 hours or until the internal temperature reaches 165°F. Continue with the rest of the steps instructed above.

How To Store Trail Bologna

Trail bologna can be stored in an airtight container in the fridge for about 7 days. Opened casings should not be frozen or they might lose their texture and quality.

Always check the meat before serving. Trail bologna is cured but homemade trail bologna may still be susceptible to deterioration.

Trail bologna is what nostalgia is made of. Many will remember and still enjoy its flavor as this meat has been a part of people’s diets for decades!

Now that you know what trail bologna is, how it’s made, and how you can make it at home, here are some great related questions!

Trail bologna is usually considered to be a healthier option because of its lean meat percentage. On average, you can get around 1g of carbs, 8g of fat, and 9g of protein in a single serving which totals to about 120 calories.

How does trail bologna compare to summer sausage?

Summer sausages are made with a mix of venison, beef, and pork and have a higher percentage of fat (30% or more).

This sausage was invented in the European region and has a distinct tangy flavor thanks to the added citrus, while trail bologna has a smokey and garlicky flavor.

Both sausages are available in several varieties which means that their flavors will vary greatly from one shop to the other, however, both have a distinct taste that sets them apart.

Can trail bologna be cured and made with homemade ingredients?

It can be quite the hassle to make and cure trail bologna using homemade ingredients.

The ingredients are usually measured out by master sausage makers who know the ins and outs of the cooking process. Any inadequacy in the curing or flavorings may result in wastage.

This is why you should always use trail bologna kits. They are designed to make exact quantities and pre-include everything that you require, including the fibrous casings.

They also provide detailed instructions on how to make trail bologna too!

Up Next: How Long To Deep Fry Frozen French Fries

How To Can Fruit Cocktail – The Ultimate Guide