Home Cooking Tips What Does Swordfish Taste Like?
Cooking TipsFoodsguy 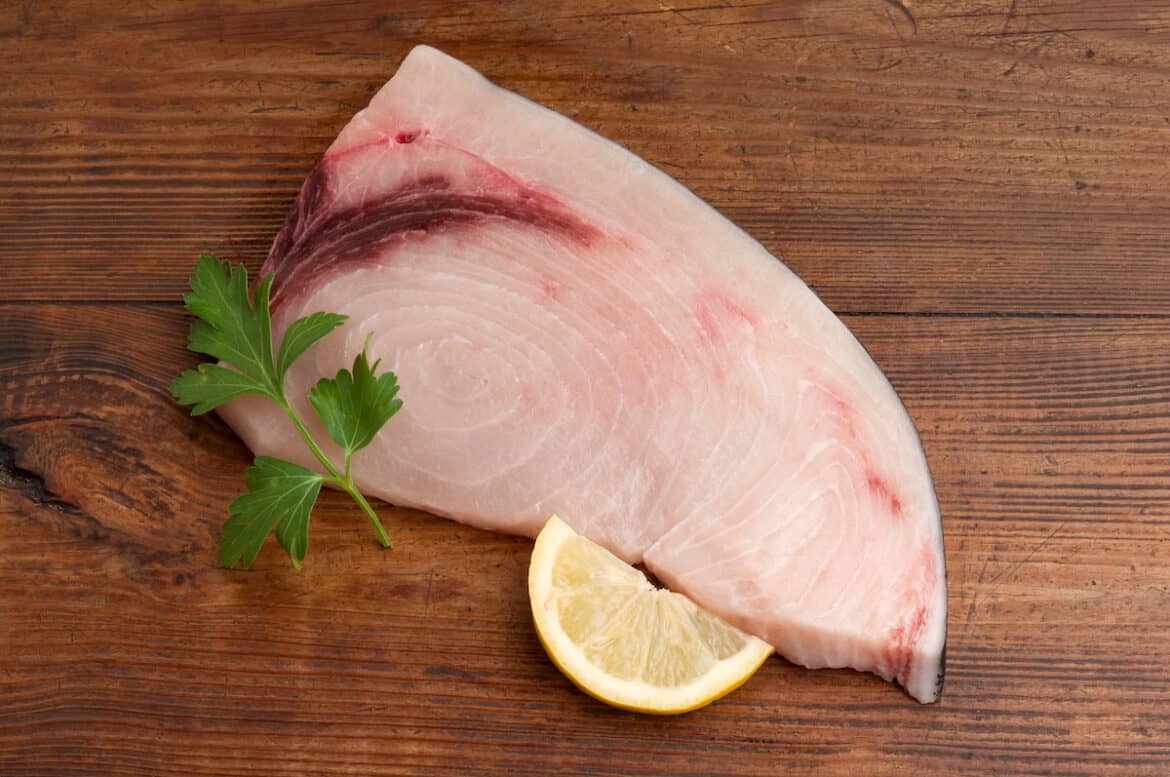 If you’re a seafood lover, then you ought to taste the different types of fish as each one has a unique taste, smell, and texture.

Swordfish is certainly no exception! It is known to be one of the tastiest fish available today owing to its excellent flavor.

So, what does swordfish taste like? Swordfish have a mild taste with a slight sweetness. It doesn’t have an overpowering fishy taste as observed in other fish meat. It also offers a dense texture which people consider equivalent to beef steak.

However, there’s much more to know when it comes to the overall flavor and taste of swordfish. Read on to find out!

What Is A Swordfish?

A swordfish is a unique type of fish characterized by a long, flat, and pointed snout. It resembles a traditional sword which is where you get the name swordfish.

But, unlike its narrow snout, the body of the swordfish is more on the round and broad side. This makes the swordfish quite dense and fleshy.

Swordfish is mainly found in the Pacific, Atlantic, and Indian ocean. As such, people from all over the world use it widely in their dishes.

The overall flavor profile of a swordfish is based on various elements like taste, smell, and texture. All of these combine to give you a scrumptious swordfish dish.

The taste of swordfish largely depends on the way you cook it and the seasonings used. But, for the most part, it does have a standard taste.

A swordfish has a mild sweet taste that makes it extremely delicious. It also lacks a very strong fishy taste. Hence, it is ideal for people who don’t like an overpowering fish taste.

When you compare it with other fish varieties, you may find that its flavor is slightly stronger than tuna, mahi-mahi, and marlin.

As swordfish feeds on crustaceans, it may also have a slight taste of crawfish at times.

The swordfish has a pleasant smell of fresh and clean fish. However, you may think that anything that smells fishy cannot be pleasant or nice. This is not the case.

If you get a swordfish that is fresh, it will have a very ocean-like fish smell. On the other hand, if it is stale, it may have an overpowering fish smell like how it smells in the dockyards.

The texture of a swordfish is one of the best out there. As mentioned earlier, a swordfish has a round and elongated shape. This makes the fish very fleshy and dense.

So, when you’re cooking any dish with swordfish, you may notice that the meat feels heavy and thick.

Swordfish is also a type of pelagic oily fish. Hence, it has an oil content of around 30% in its fillet. The increased oil content makes it heavier and richer in texture.

In fact, swordfish has such a rich texture that it is often compared to a beefsteak. It is also served in the form of a steak.

You need to use a knife first to slice swordfish into smaller pieces. You don’t have to eat other fish like salmon or halibut in this manner as they’re flaky and light.

The color of your swordfish determines whether you have cooked it properly or not. It has a huge impact on the overall taste too.

The raw meat of a swordfish is usually of white or pinkish-orange color. However, once you cook it, the cooked meat turns a lovely shade of beige.

The different cooking methods can definitely have an overall change in the taste and texture of swordfish. Let’s see how each method of cooking has an effect on the swordfish’s taste.

Grilling a swordfish is the most common way of cooking it. The dense texture and mild taste are perfect for a grilled dish. The texture also prevents the meat from falling into the grill. Instead, it retains its form.

A grilled swordfish has a mildly sweet taste. The seasonings that you apply before grilling will only enhance it more. You just need to make sure that the seasoning or marinade isn’t too strong to overpower the swordfish’s taste.

You can grill it by following these steps:

You can also add other seasonings to it like garlic, paprika, basil, cumin, or cilantro to swordfish during marination.

You can either shallow-fry or deep-fry a swordfish depending on your requirements.

A shallow-fry swordfish has a similar texture and taste to a grilled one. But, the fish requires more oil while frying to incorporate the flavors of all supporting ingredients.

Conversely, a deep-fried swordfish is usually not very delicious as the meat texture may turn a bit hard and tough.

However, if you’re not into grilling, you can opt for frying a swordfish to prepare a swordfish steak. Here’s how you can do it:

If you steam a swordfish, then you can expect its original taste to stay intact. It will remain mildly sweet without any ingredients dominating its taste.

Some other lesser-known cooking techniques for swordfish include baking, broiling, smoking, or simply sautéing.

How To Know If A Swordfish Has Gone Bad

The taste, texture, smell, and color that we have described above are of a fresh swordfish. Hence, the appearance of swordfish meat has a huge impact on its taste.

So, there are certain points that you need to keep in mind if you want to know whether a swordfish tastes nice or not.

Ensure these three things while purchasing a swordfish to get a mildly sweet and extremely fresh taste.

What Are The Pros And Cons Of Eating Swordfish?

If you are planning to eat swordfish, there are certain benefits and downsides that you should consider first.

A swordfish is very nutritional due to the presence of amino acids, essential fatty acids, and some micronutrients.

These amino acids and essential fatty acids from swordfish help in the development of the body and keeping it healthy. They also help in reducing the chances of chronic illnesses.

If you’re one of those people who can’t stand the strong and overpowering taste of fish, then swordfish is suitable for you. It’s also a great fish for someone who wants to try seafood.

As mentioned earlier, a swordfish has a very mildly sweet taste. It also doesn’t taste or smell as fishy as other fish species.

A swordfish can blend well with other ingredients to create a flavorful dish.

Most of the fish have a flaky and light texture. This is not the case with swordfish as it has a delectable and fleshy texture.

This meaty and heavy texture works wonders if you’re planning to make a swordfish steak. It also helps in keeping the fish juicy and moist.

The biggest downside of consuming a swordfish is its high mercury content. As a swordfish mainly feeds on other small fish, it contains a high amount of mercury.

A swordfish is one of the most expensive fish as it is extremely hard to catch at times. It is also not commonly available as other fish.

So, you have to pay more for a swordfish in comparison to other seafood items.

A swordfish, with its subtle and sweet flavor, is one of the best-tasting fish available today. So, if you get a chance to taste it, don’t let it go!

After all, the rich and fleshy texture of the meat tastes excellent when a swordfish is grilled or fried.

Up Next: The 11 Best Farmer’s Cheese Substitutes