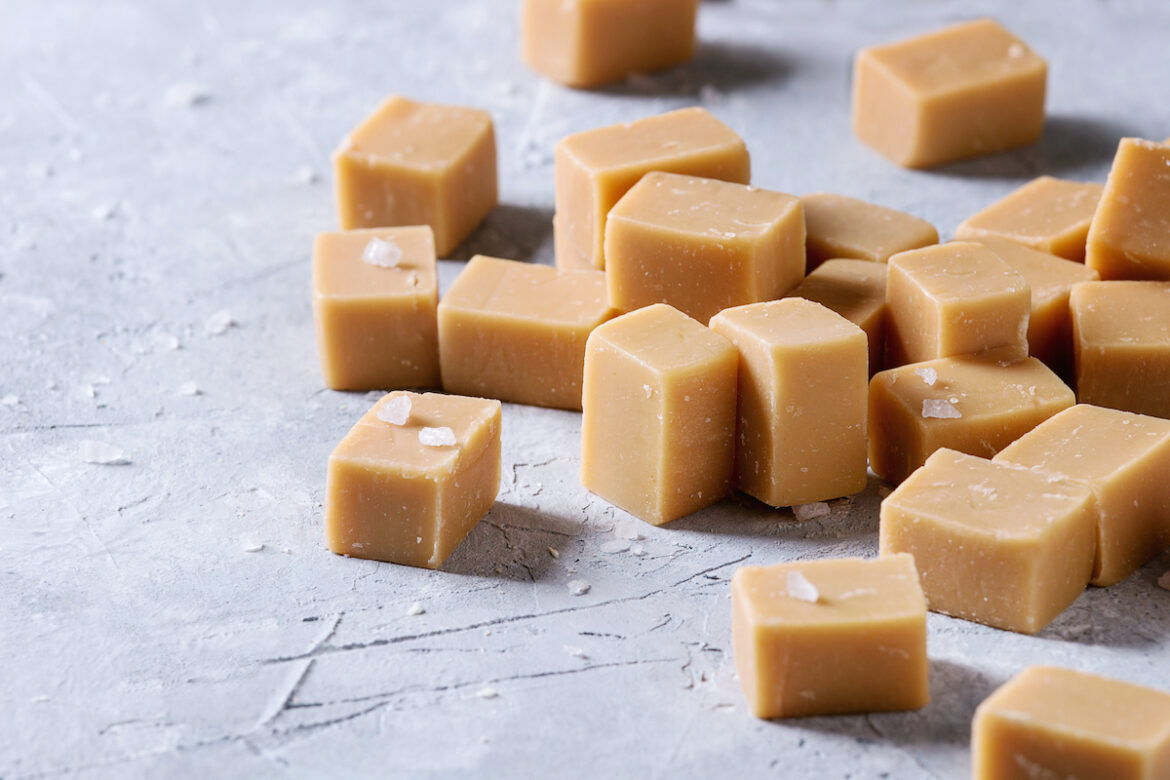 Butterscotch has a very distinctive taste. It often gets confused with caramel, or even with toffee, but it is very different.

To understand its flavor, we need to actually know what butterscotch is. Like caramel, butterscotch is a cooked sugar, and it is always made with brown sugar, not white.

To make it the right way, you need to melt the butter with the brown sugar to begin with, which helps the granules to dissolve evenly and melt gently.

Once the heated mixture liquidizes and becomes less grainy, cream is added to it, and you wait until everything boils together and reaches the optimal temperature.

So, what does butterscotch taste like? The flavor of butterscotch is a fusion of browned butter, caramelized sugar, molasses, cream, and a pinch of salt. It’s soft, rich, and sweet, without the bitter notes that can make caramel so special and more complex.

Read on to understand all there is to know about butterscotch!

Butterscotch is more moist than caramel and, because you use brown sugar, it tends to be more acidic than the white sugar used to make caramel.

It is easier to make too; acidity helps fight crystallization and the moisture lets it burn slower, so you do not have to rush or stress out to get perfect butterscotch.

True butterscotch should have a bit of a salty edge to help round out the butter and sweet sugar flavors.

Butterscotch, as its name states, is made with butter, but there is no scotch or any other liquor in its original recipe. The scotch part has more to do with where butterscotch is said to have originated: in Scotland in the 1700s.

Butterscotch tastes great, and is also simple and versatile, and the best part is that it has no complicated ingredients; most of them can be found in your pantry for sure.

The fact that it is made out of brown sugar gives it a different taste, because brown sugar is simply white sugar with molasses. The darker it is, the more molasses it contains, and the stronger and deeper its flavor gets.

Also, using darker brown sugar will contribute to the dark golden color we all know as “butterscotch color.”

If you’re wondering how it’s made, here’s a great video from Sticky on YouTube.

Butterscotch Vs. Caramel Vs. Toffee

These three preparations are definitely different, and they do not even taste the same. But, in the modern world, they do get mixed up a lot. Why does this happen?

Well, to begin with, the three of them have sugar as their base ingredient (whether it is brown or white) and they have a similar brown and gold color.

Moreover, the food industry tends to confuse consumers and, a lot of times, states that something contains toffee, when it is actually caramel or sells you butterscotch as “salted caramel” in many desserts.

You might be surprised to know that many of your favorite “toffee” flavored treats don’t actually contain toffee. For example, a toffee flavored sauce is all it takes to make sticky toffee pudding – no real toffee required!

Toffee can also have ingredients added that give it different flavors such as salt (salted caramel) and alcohols (such as Baileys) and nuts, dried fruits, and spices.

These two flavors get mixed up all the time, but they are very different. Real and pure caramel is made out of only two ingredients: water and white sugar.

Caramel can be made in any batch size, so long as you follow the golden rule of 2 parts sugar to every 1 part water.

Despite only having two ingredients, the cooking method is not that simple. First, you need to pour the water and sugar into a pan and start low heat so that the sugar begins to slowly dissolve into the water.

Be careful to ensure that the sugar has completely dissolved before the water reaches its boiling point. Once it has, you can increase the heat. You cannot stir the mixture during this process. Next, boil the syrup until it reaches a golden color.

The temperature should be around 194°F. You can gently swirl the pan to get a more even color. Once your mixture is golden, you can pour more water into the caramel.

Do it carefully because it is very hot, and it can spit. During this step, you need to add the same amount of water you user in the initial step. Once you have added the water, make sure the caramel is properly emulsified.

This method is the most traditional one. There are also people that add cream instead of water in the third step (it technically is not caramel if you do that) or some chefs use liquor such as rum to give it extra flavor too.

Toffee, another popular flavor for all kinds of desserts, beverages, and more, is originally made from white sugar mixed with butter, milk, or cream.

Recipes also typically include another ingredient to help it crystalize, such as lemon juice or golden syrup.

To achieve the hardened, brittle texture you expect from toffee, it’s cooked longer than caramel and butterscotch.

To make toffee, gently melt white sugar and butter together, ensuring they’re mixing evenly and the butter isn’t separating from the mixture.

Stirring the mixture while the sugar is dissolving is highly recommended, but once it is boiling, you have to stop stirring and start tilting and swirling the pan instead.

The pan should be heated to between 280-310°F, so the preparation can reach a “soft crack” stage and then a “hard crack” stage. Then you let it set and cool down.

Depending on the consistency you prefer, you can add larger amounts of butter or cream for a chewier and softer final product or cook it at a higher temperature for a more brittle crunch.

Butterscotch is often described as “caramel with a kick” because of its rich, deep and buttery flavor.

You can make a bunch of desserts with butterscotch, some of the most popular ones are puddings, ice cream, tarts and even on top of grilles fruits such as pears, apples or pineapple.

To make an old-fashioned and traditional butterscotch pudding, that warms your heart and soul, you will need a good heavy bottomed pan to be able to cook the pudding evenly.

When you crave a cozy dessert that is silky and sweet and has a soft and creamy texture, this is the way to go.

To make it, you just need to melt the brown sugar and the salt with water, so that the sugar melts evenly. You need to heat it on low fire until it melts slowly and begins to bubble.

Then continue to cook for about six minutes more on low heat, making sure it does not burn. Make sure you don’t stir it while it’s cooking, swirling the pan around a bit is enough to distribute the heat evenly. Let the mixture cool down.

At the same time, dissolve 3 tablespoons of cornstarch in 2 tablespoons of milk and whisk it until it gets smooth. Add 3 egg yolks and keep whisking.

Then combine a cup of milk with a cup of heavy cream and dissolve the cornstarch mixture in there until smooth.

Add the mixture to the partially cool brown sugar, stirring it up as you pour it. It’s normal for the sugar to seize up and become hard. It will return to a melted state after the pan is placed back on the heat.

Heat the pan again and bring the mixture to a boil over medium-low heat, whisking constantly.

Now that all the brown sugar has dissolved, and the mixture is beginning to thicken, being using a silicone spatula to scrape the bottom and sides of the pan.

Once the pudding comes to a boil and you’ve achieved a thick consistency, immediately take it off the heat and pour it through a fine mesh strainer.

The time has come to add three tablespoons of unsalted butter, some vanilla extract, and scotch, bourbon or whiskey, if you want to give it an extra flavor touch.

Whisk everything to incorporate the butter properly, until combined and smooth.  You can eat it either warm or cold, after letting it set in the fridge for two hours.

There is no better combination that the creamy and cold sensation of ice cream and the richness of butterscotch taste.

Here is a great and easy butterscotch ice cream recipe to make at home that you will want to save for later.

Heat a pan on medium and stir some brown sugar, butter and vanilla extract until the butter is fully melted, and the brown sugar is completely dissolved.

In three t four minutes, the mixture will get bubbly and when it does, you need to whisk in 1/2 cup whipping cream until smooth and remove the butterscotch mixture from the heat.

In a second pan, you will add 1 cup of whipped cream and two cups of half-and-half and bring it to a simmer.

Stir constantly over low heat just until your mixture is slightly thickened, two to four minutes.

Immediately remove it from the heat and pour it through a fine strainer into a clean bowl. Finally, whisk in the butterscotch mixture. Now, you need to let it chill until cold, stirring occasionally, for about 2 hours.

As a last step, you can now freeze the mixture in an ice cream maker and serve if you like it softly frozen. If you prefer it with a firmer texture, you can freeze it in silicone containers for three to six hours. Enjoy!

How To Make A Butterscotch Milkshake

How Long To Microwave Milk For Hot Chocolate

Pitaya Vs Acai – What’s The Difference?

How To Sweeten Greek Yogurt (11 Ways)

Do Coke Icees Have Caffeine?

What Is A Chicken Oyster?